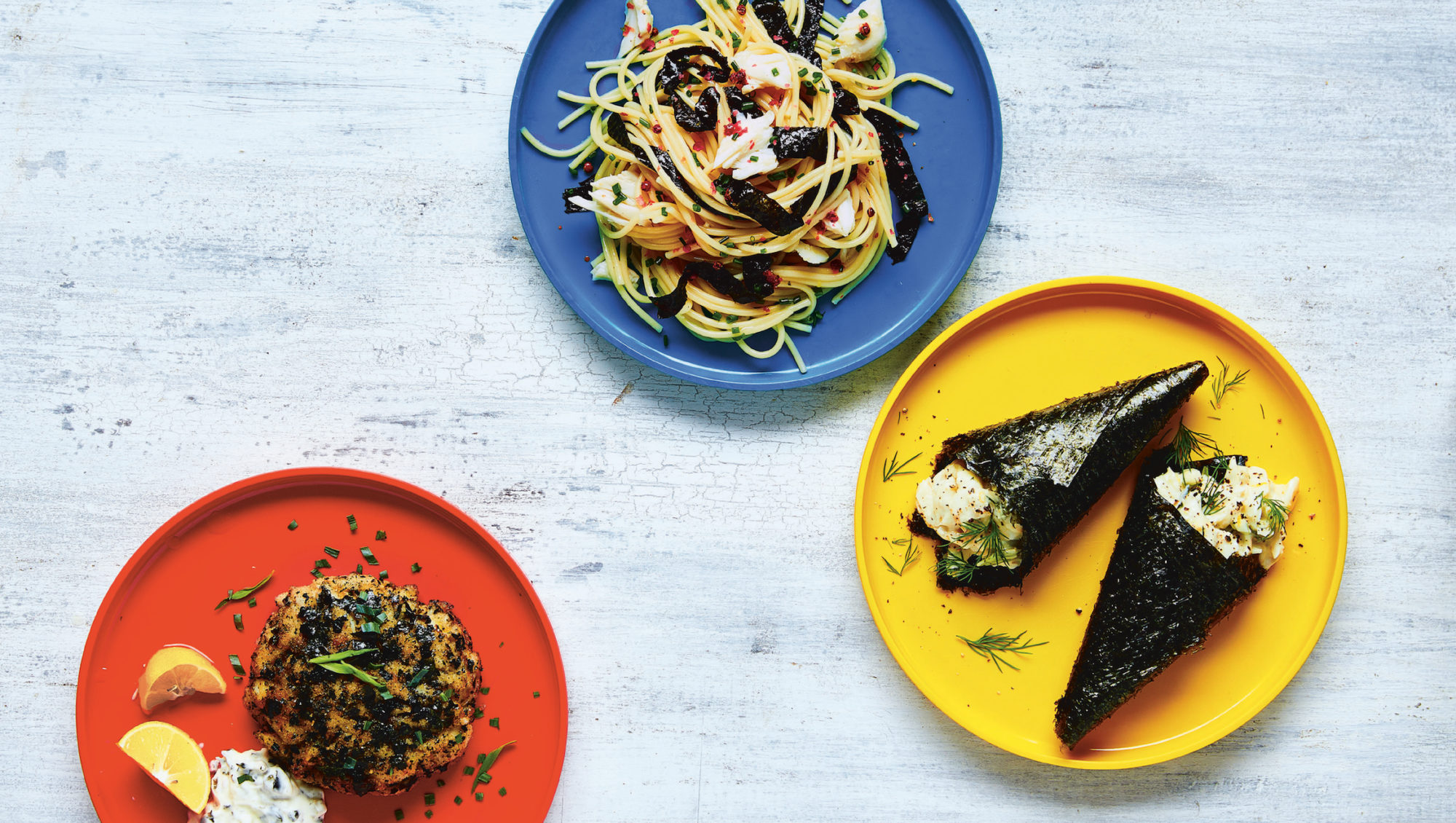 A conversation with Charlotte Druckman about her latest book, Kitchen Remix.

In Kitchen Remix, Charlotte Druckman has some big ideas. The new cookbook takes 25 unexpected ingredient trios and helps you turn each into three distinct dishes (beyond the usual default of throwing it all into a pan and letting it sauté away). This means that zucchini, pistachios, and mint can take the shape of a salad, a low-and-slow-cooked zucchini, or a sweet loaf. Pork belly, prunes, and radicchio have three lives as a braise, a stir-fry, and a salad.

As a longtime fan of Druckman’s writing (check out her anthology Women on Food, which was just nominated for a James Beard Award), I was eager to catch up with her by email about what she’s been up to in the kitchen the past few months. While she never could have predicted that Kitchen Remix would come out in the midst of a pandemic, it just might be the perfect book for right now.

How have the last couple months been for you, and what have you been cooking?
I think, same as for everyone else, this is a day-by-day period. It’s especially hard for those of us who are control freaks, I gather, just because we’re in a situation where we feel we have so little control, and where we know so little. Limbo isn’t an easy state for the Type As out there.

I’m one of the ones who likes to bake. That’s my real creative outlet, and it’s my calm place. I also love baked goods and could live off of them, which, yes, I know—all things in moderation, and you should not have cake for breakfast, lunch, and/or dinner. But when I get the itch to cook, it’s usually scratched by baking. My motivation to cook proper meals tends to be other people. For myself, I like to pile lots of things I like together in a bowl, or on toast. I joke that I’m running a Build-A-Toast Workshop over here. This is how I liked to eat even before the quarantine. I had loads of tinned Portuguese sardines, jars of anchovies, and tuna packed in olive oil, along with cans of Bumble Bee tuna (I stand by Le Bee). I’m roasting a lot of vegetables, I’ve noticed, especially—and this is unexpected—sweet bell peppers. This strikes me as a retro ’90s move, but for some reason, I’m just loving having them around (they’re especially good with anchovies) and putting them into or on top of things. I keep roasting garlic, too.

Have you found yourself discovering any brilliant new combos or trios since the book came out?
I’m finding how swappable some of those trios really are! And that’s more to do with other people cooking from the book and reaching out. I also find I’m more nimble-minded in terms of figuring out what to do with ingredients or leftovers. My parents had leftover roast chicken and buttermilk, because my mom had made Nigella’s buttermilk-marinated chicken (from 2004) and didn’t know what to do with the excess buttermilk. I realized she could take the shrimp, tomato, and Marcona almond salad from the cookbook (my parents love it) and do it with chicken, or at least just use that dressing and make some kind of chicken salad. So they did. And then they thanked me.

People have been making the cauliflower casserole and changing up the cheese, due to halloumi not being as mainstream as it should be (ahem), or using panko in place of breadcrumbs (me? I’d go for potato chips, personally).

In my own cooking, I’m in a more micro-obsessed place. I go through spice phases and am currently enjoying my coriander phase. It extends to both savory cooking and baking. I’m also having fun with malt powder. I’m contemplating taking my precious Le Sueur peas and making a cheater’s version of mushy peas—I think you can smash them up with ricotta, roasted garlic, some smoked chile flakes, a squeeze of lemon, salt, and pepper, and there you go. Better than mashed potatoes? Perhaps! You can at least spread it on toast. Oh, I’m also making tuna melts and various cheese toasts (I adore Welsh rarebit; it’s a perfect quarantine food, hello!). And I’m having a Jarlsberg moment. Go figure.

I’ve been leaning on nori more than ever in my home cooking, and I love your idea to combine spaghetti with crab, nori, and Meyer lemon. How else have you been riffing on the ingredient, and if people have trouble finding crab, is there a good swap?
I have realized the gentle elegance of something like the spaghetti with crab, Meyer lemon, and nori could easily become a quarantine-friendly dish with a bolder persona if you used sardines in there—with regular lemons, because they’re less floral and subtle than the Meyer lemon, and the strength of the sardines needs that sharper acidic counterpart. I’d also use black pepper instead of pink peppercorns in there, for the same reason, and possibly garnish it with scallions instead of chives, although I have this belief that chives taste good on everything.

I use nori with abandon. I really love it in pasta dishes: if you cut it into strips, it almost mimics noodles. I like it in salads, too, as a garnish, but I also love when it wilts into the leaves. You can blitz it and bake it into bread, or you can use it in any kind of breadcrumb topping or dry-coating mixture. You could bake it into savory shortbread (and use some buckwheat flour in there).

Are there any other MVPs that are really coming into play in your pantry right now?
This is so not the answer anyone wants from a food writer, but it is the truth: I’m having a longing for all of these commercial baked goods from my childhood. It started with the Entenmann’s Crumb Coffee Cakes, which, btw, are not easy to track down. Then I moved on to Fig Newtons, and to be clear, we’re talking the Nabisco brand, not the organic, hippie-dippie Newman’s Own or health-food store kind. This is the stuff with stabilizers. Jell-O pudding has been purchased as well. It’s weird because, as noted, I love to bake. I also love to make pudding (rice pudding is my ultimate favorite comfort food, or at least on the sweet side; and I have been making that, but still, with leftover rice, so not entirely from scratch). My mom baked when I was growing up. And she made pudding from scratch. But for whatever reason, I’m not nostalgic for what she made. I’m nostalgic for what she bought. Maybe someone can psychologize this for me. The cravings are specific and intense. On the other end of the spectrum, but also a store-bought item, Raaka chocolate! I love it. It’s raw, not too sweet. I’ve been treating myself to a bar before bed on the nights when I deem it “necessary.”

Why is Kitchen Remix the perfect book for these imperfect times?
One of the things cookbooks aren’t so good at is teaching resourcefulness. It’s a really hard thing to codify or articulate, and this isn’t limited to cookbooks, or even cooking. I believe the best way to teach it is to show it, not to try to explain it—to get people to start thinking that way without even realizing it’s happening, just through practice and osmosis, I guess. That’s what I tried to do with Kitchen Remix, and I think it’s what makes it especially useful right now, and, at the same time, timeless. It’s teaching you how to think, and how to approach ingredients in a number of ways, without telling you that’s what’s going on or giving you a whole set of rules, or getting you too dependent on any one recipe. It also makes food shopping a lot easier, because you really could buy a lot of chicken legs, apples, and shallots and make three very different meals, with leftovers, without having to supplement those ingredients with too many other fresh produce items.

Another goal I had was to bridge the gap between what I see as a lack of confidence in one’s ability to cook, or even a phobia around cooking, and an appetite for and interest in food culture and in lots of different kinds of food—whether it’s a regional or cultural cuisine people are opening their palates to or specific ingredients or dishes. We’ve got a significant population—and I think food media is somewhat responsible for this—that’s much more adventurous about eating in restaurants but timid at home, and maybe making a few basic (or #Basic) dishes over and over again because they’ve gone viral and are easy enough. I wanted them to take that hunger and curiosity into their kitchens, and to feel as though they could actually make something delicious, with a complexity of flavors. 4 RECIPES WE LOVE FROM KITCHEN REMIX

Spaghetti with Crab, Nori, and Meyer Lemon
Druckman also loves this combo with canned sardines in place of the crab, and regular lemon in place of the floral Meyer lemon.

Labne Baked Eggs
These gently baked eggs are impossible to screw up, and the perfect way to spotlight the briny green Castelvetrano olives you’ve been keeping around for martinis.

Potato Chip Crusted Chicken
Potato chips help create that golden-brown crust you might get from breadcrumbs, but with an extra dose of crunch and salt.

Last week, we caught up with chef and author Hugh Acheson about what he’s been cooking, as well as some favorites from The Chef and the Slow Cooker and Sous Vide: Better Home Cooking.

In Easy Tiki, PUNCH senior editor Chloe Frechette gets to the heart of modern tiki culture with 60 recipes from some of the best bartenders in the business.

If your afternoon snack spreads need a bit of inspiration, check out That Cheese Plate Will Change Your Life, by Marissa Mullen. And don’t miss Ruby Tandoh on TASTE, writing about the movement toward maximalist cheese boards.