Get a free recipe
Subscribe
When SnackWell’s Was the Flavor of Permissible Indulgence
By: Rebecca Flint Marx Illustrations: Adrian Mangel 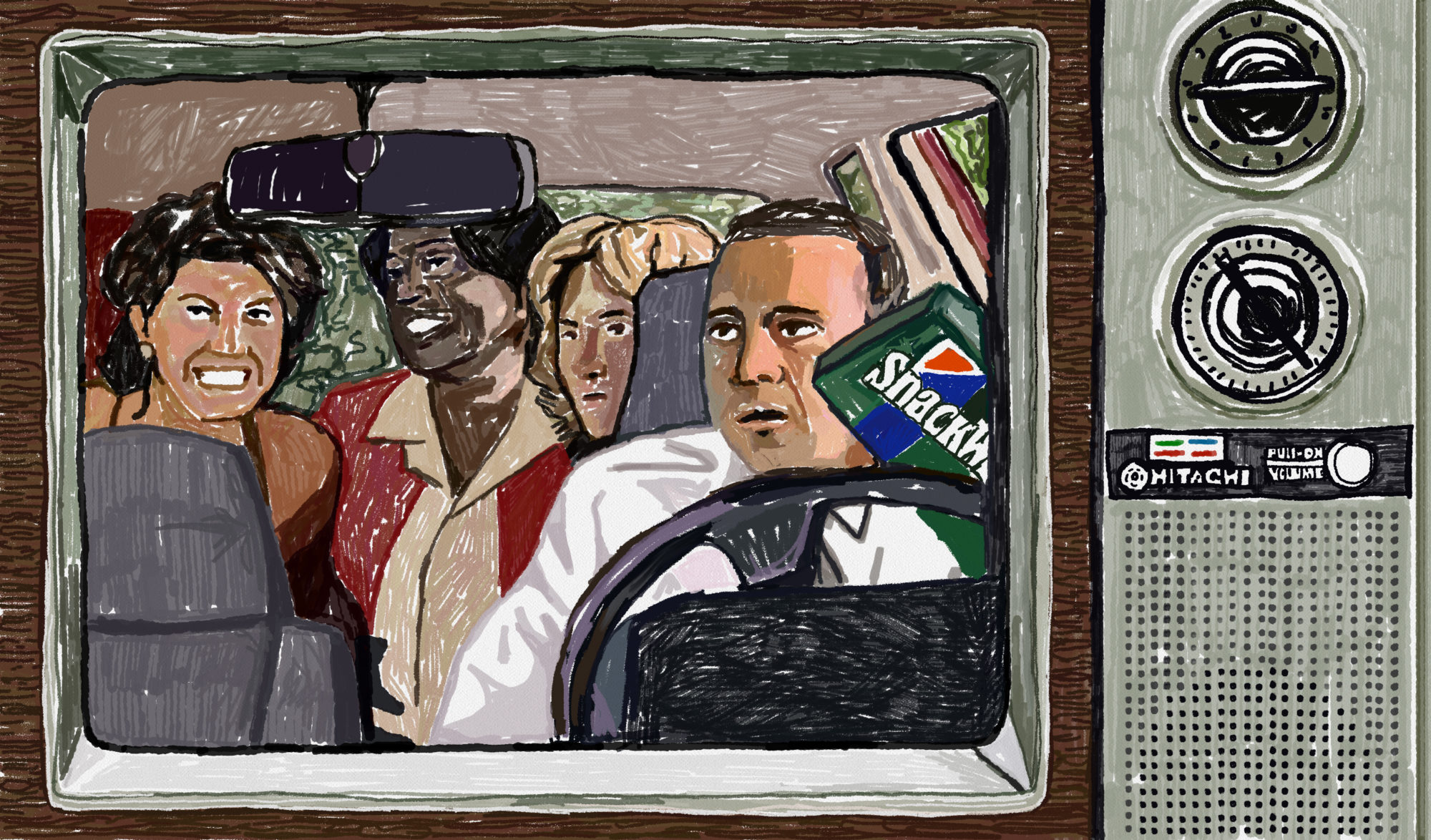 A decade ruled by anti-fat hysteria got the cookie it deserved.

There he is, just trying to leave work and walk to his car, and there they are, the three women who want his cookies. “You got some explaining to do, cookie man,” one of them says as they accost him. Where have all of the SnackWell’s gone? Why can’t they find them in the stores? Where can they get more of them? “Hey! I just make the cookies,” he protests, struggling to open the car door. “You want the big boys upstairs!”

The women aren’t having it. “Check his trunk!” one of them screams. “You don’t want to do that,” he says, but to no avail. These women want their cookies, and their rapacious demands have, yet again, left the SnackWell’s cookie man quivering and powerless in the gaping maw of the female appetite.

This commercial for SnackWell’s appeared in 1993, the same year that Bill Clinton was sworn into office, Jurassic Park was released, and Lorena Bobbitt cut off her husband’s penis. An eventful year by any measure, it was made even more so by the ascendance of SnackWell’s, a line of fat-free, no-cholesterol cookies so popular that it created supermarket shortages and actual delivery-truck stalkers.

Here was a cookie that you could eat as much of as you wanted. Because fat and cholesterol were bad, and everything else was…fine.

SnackWell’s runaway success was a particularly ’90s moment, situated as it was against a backdrop of relative optimism and the anti-fat hysteria that both defined and degraded the way that many Americans ate during the decade. And it was arguably also the defining moment for the very American idea of permissible indulgence. Here was a cookie that you could eat as much of as you wanted. Because fat and cholesterol were bad, and everything else was…fine.

For those of you who either weren’t alive, or cognizant, in the early 1990s, the diet food at the time was still defined by cottage cheese and desiccated Weight Watchers frozen entrees. SnackWell’s was thus a godsend, engineered by Nabisco and delivered to grocery store shelves to save us all through the promise of pleasure without consequence—so long as you didn’t dwell on how much sugar had been added to the cookies to compensate for all of the missing fat. But very few people were dwelling—sugar and carbs wouldn’t get their time in the shame spotlight until later. In the meantime, noted weight-loss proselytizer Susan Powter was still arguing that you could eat 32 baked potatoes or one slice of cheese.

On its surface, the 50-calorie SnackWell’s devil’s food cookie looked like any other cookie born of food science and corn syrup: The devil’s food variety, for example, was just a standard chocolate cake cookie enrobed, turducken-style, in a gossamer-thin layer of marshmallow that was in turn shellacked with an eerily smooth dark-chocolate coating.

But really, there was so much more going on beneath the surface than some bland if enjoyably squishy chocolate-ish “cake.” There was, in fact, a perfect storm brewing there. Because in addition to being a triumph of food science, the SnackWell’s cookie was a reflection of the processed-food industry’s consummate ability to react and reinvent; savvy (if highly sexist) marketing; dubious government health studies; the average American’s puritanical yet schizophrenic relationship to pleasure; and, oddly, male emasculation and the societal fear of ravenous and demanding women. And it all worked: Nabisco ran out of SnackWell’s three months after the brand’s launch. SnackWell’s was introduced by Nabisco in 1992; its first products were its devil’s food, shortbread, and creme cookies. The cookies weren’t the invention of just any old food scientist: They were the brainchild of Sam Porcello. The lead food scientist for Nabisco, Porcello was the reason that Oreos are what they are today: He invented the modern creme filling for Oreos and the Double Stuf Oreos and the coatings for chocolate-coated Oreos. So really, the average American dieter never stood a chance.

Four years before SnackWell’s launched, the U.S. surgeon general and the National Academy of Sciences released two major reports that both recommended lowering fat consumption. Marion Nestle, a New York University professor of nutrition, was the managing editor of the surgeon general’s report. “The rationale behind the recommendation was that meat and dairy were major sources of saturated fat and that a recommendation to eat less fat would automatically mean eating less saturated fat,” Nestle explains. Plus, because fat has twice the calories of protein or carbohydrates, eating less would mean eating fewer calories. So the message became: Fat is bad. But protein and carbs? Not nearly as bad. (“In retrospect,” Nestle says, “it would have been better for those reports to advise watching out for calories from all sources, eating less saturated fat, and cutting down on meat and dairy to do so.”)

And so major food companies did what they do best: react to the news and reformulate. As a “diet” food, SnackWell’s entered the marketplace with a few advantages. For one, low-fat eating was already a mainstream trend. For another, SnackWell’s wasn’t some “weirdo [weight loss] powder” sold in a natural health foods store, says Kara Nielsen, the vice president of trends and marketing at CCD Helmsman, a culinary innovation agency. It was “safe, clean, and understandable—it was in the cookie aisle.”

It’s easy to imagine, Nielsen adds, “the excitement of being given permission to eat a cookie, and the name obviously is sort of baked into the product, pun intended.” SnackWell’s wasn’t so much a product as a diet brand, one that, as Nielsen says, “reflects getting away from the diet mentality into the lifestyle mentality.” SnackWell’s triumph was to transform (conceptually, at least) dieting into a fun new way of eating, an idea reinforced by its branding and aggressive marketing.

And oh, the marketing. If you turned on a TV in the 1990s, then you very likely came across the specter of the SnackWell’s cookie man, a diminutive, easily frightened fellow who was constantly being chased down by a trio of women who wanted their SnackWell’s cookies. The weird note of psychosexual panic underlying their interactions was amplified, perhaps unintentionally, in a Chocolate Truffle cookie commercial that finds the cookie man locked in a room, worrying aloud that “when those ladies see all this rich chocolaty cream we’ve stuffed into [the cookies], I’m finished!” (Spoiler: They’re in the room with him.)

The ringleader, with her trademark booming laugh, veered perilously close to caricature. (As did, obviously, the general idea that women could be driven to petty thievery by the promise of fat-free cookies.)

The SnackWell’s commercials were “part of that genre of the ‘Where’s the Beef?’ grandma or the Charmin man,” says Amy Bentley, a professor of nutrition and food studies at New York University. Bentley, who still remembers “those ladies chasing down the cookie man,” points out that in addition to “clearly targeting dieting women,” the ads sought to appeal to a wider array of women by making the ladies’ ringleader a black woman. But like the ads’ overall messaging, that, too, was fraught: The ringleader, with her trademark booming laugh, veered perilously close to caricature. (As did, obviously, the general idea that women could be driven to petty thievery by the promise of fat-free cookies.)

SnackWell’s was so effective in its message of permissible indulgence that it even got its own phenomenon: the SnackWell’s Effect, which states that dieters who buy low- or nonfat foods will consume more calories from them than they would regular versions of the same foods. The phenomenon elevated the cookies to even greater pop-cultural heights when the SnackWell’s Effect was referenced in a 1995 episode of Seinfeld.

But the only place to go from such great heights was down. A 1998 New York Times article noted that while SnackWell’s sales had soared to about $490 million in 1995, they subsequently slumped thanks to competition and “complaints about the taste.” (For her part, Nestle remembers being unimpressed with the flavor of SnackWell’s, describing it as a “standard processed cookie, and way too sweet.”)

Nabisco’s solution was to pump more fat into the products, but as the article pointed out, sales of lower-fat foods in general had fallen off, and the winds of change were blowing. They were blowing, as it turned out, towards the Atkins and South Beach diets, both of which decried sugar and trumpeted the supremacy of animal proteins. Suddenly, fat-free snacking looked almost as outdated as SnackWell’s portrayal of the average woman’s grasp of sanity in the face of low-fat snack foods.

You can still find SnackWell’s today, albeit in slightly different form: The brand was sold to Back to Nature Foods Company in 2013 and had its cookie recipes reformulated to better appeal to today’s theoretically more enlightened consumer (read: sugar has replaced the corn syrup). But it’s now one of many so-called healthy snacks on the market. If you want to look at the long-term impact of SnackWell’s popularity, there is arguably no better place to find it than in a pint of Halo Top, the low-calorie, low-sugar ice cream invented by a dude who “just wanted to eat an entire pint of ice cream and not hate himself for it.”

Like SnackWell’s, Halo Top is advertised as an equally delicious alternative to the real, bad-for-you deal. And like SnackWell’s, its sales have been astounding. Whether we’ll look back at it from the comfortable distance of the future and shake our heads over how naive we were to believe that dietary salvation lay in the hands of food scientists, however, remains to be seen.