Get a free recipe
Subscribe
Shanghai, Beyond the Soup Dumplings
By: Tatiana Bautista Illustration: Nick Hensley 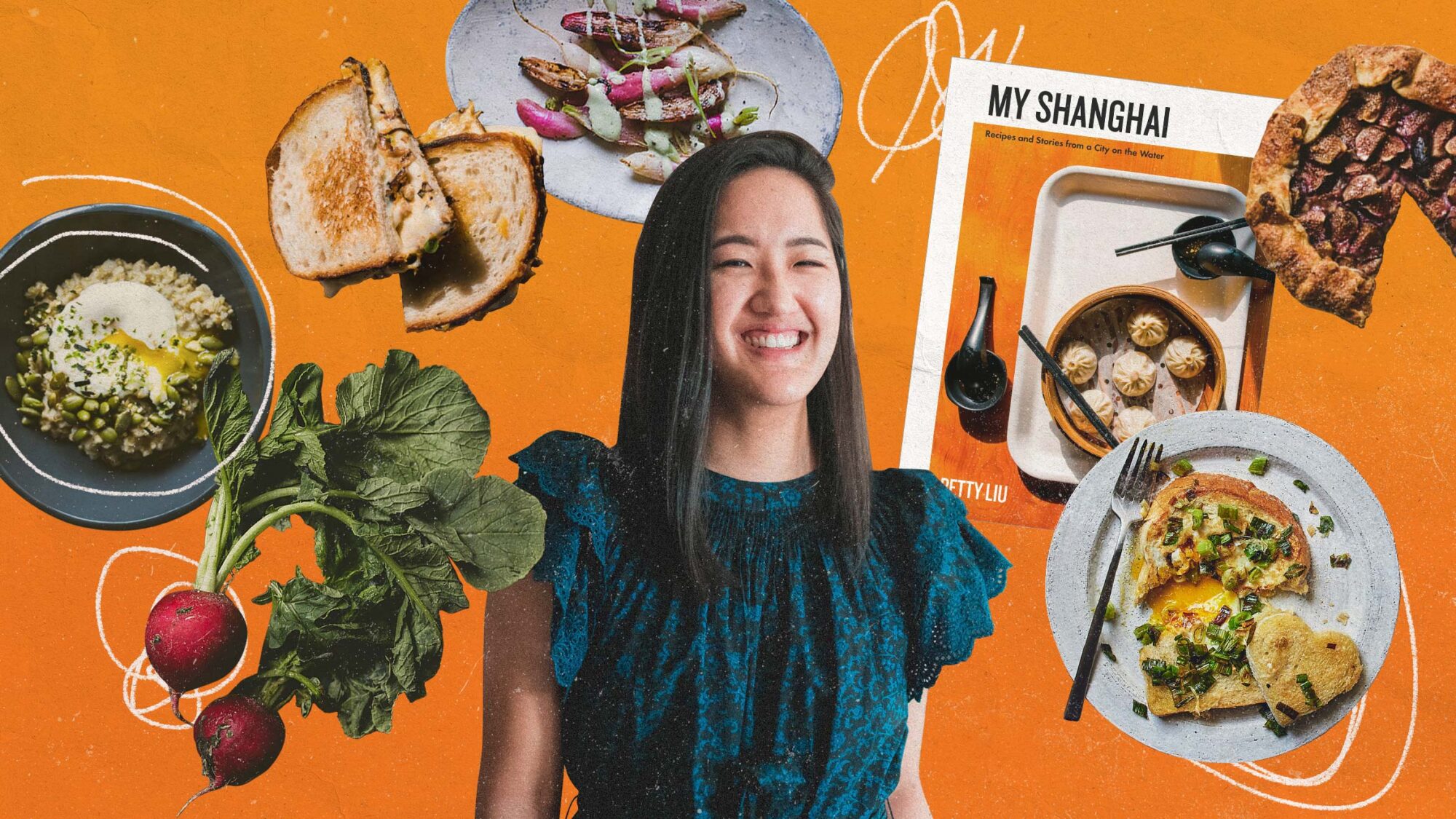 Betty Liu’s ode to the region looks past the modernist skyscrapers and restaurant mainstays that tourists gravitate toward.

When Betty Liu first learned how to cook, it started with an intent to record family recipes like her mother’s red-braised pork belly—made with inexact handfuls of ingredients and abstract visual cues—and transform them into something with step-by-step instructions she could follow. Since carefully documenting her mother’s dishes on her blog, a collection of deeply personal recipes have found a home in her debut cookbook, My Shanghai.

Liu’s cookbook is aptly named for her familial roots in the city and the wider province of Jiangsu. While many books portray Shanghai according to its postcard-worthy skyline and cosmopolitan lifestyle, Liu’s lens looks at the city through a blend of everyday street food stalls, countless plates of hairy crab and seasonal vegetables crowding a family-style spread, and celebratory dumplings that mark special holidays.

“One of my goals for this book was to just bring more awareness to the regional cuisines of China,” she mentions. In doing so, she pays homage to the steamers of soup dumplings you can find at every street corner and tells the story of autumn delicacies like rice-encrusted pork ribs that make use of seasonal lotus leaves and an aromatic marinade.

We recently caught up over Zoom to discuss the power of scallions in Shanghainese cooking, applying the hong shao (red braised) technique—which gets its signature color from slow braising with dark and light soy sauce, Shaoxing wine, rock sugar, and star anise—to any protein, and defining the region’s cuisine beyond simple adjectives.

How did your cooking journey start, and how did that eventually evolve into your cookbook?
I didn’t have much cooking skill when I was younger. And I was definitely spoiled by my parents, mostly by my mom. She would cook me all this food, and I took it for granted. When I went from California to St. Louis for college, it was a little bit of a culture shock. There were definitely a lot of Chinese restaurants available, but I also didn’t know how to re-create my mom’s food. I remember I once tried to cook a basic recipe, like tomato and egg stir-fry—you know, the gateway recipe for Chinese cooking. And it was horrible. I think I just used a random skillet that was in my dorm kitchen, and everything was mushy and stuck to the pan. And I was like, “Oh my God, what is happening right now?”

I really missed my mom’s home cooking. So, after that, I started asking her to teach me how to cook—but, of course, you know, my mom never learned through recipes or cookbooks or anything like that, or even formal instruction. She grew up using a communal kitchen. It was shared by three or four other families. And she learned, she said, mostly by helping out in the kitchen, observing and just picking things up along the way. But she’s clearly developed that intuition for cooking. So, when she was telling me how to cook, she would say, “add the right amount of wine” or “cook until it looks ready.” For someone who didn’t really have the intuitions to cook yet, that’s not really helpful to me.

I started observing her in the kitchen more, but I had a phone to video record how she wrapped wontons, and I would jot down approximate measurements. And that’s really when I started writing down those recipes. It was mostly as a way to document what she did, because she couldn’t even tell me exact measurements or the order of everything. So I started putting them in a recipe, just so I could re-create them later. And I realized that people really responded to that on my blog. And then that’s when I realized that this is something that is very universal—a lot of Asian Americans wanting to cook like their family’s home cooking but not really having a recipe to do so.

When people think of Shanghai, they think of the skyline, the buildings. I noticed that your book doesn’t include any of these shots [besides the back of the cookbook cover]. And I was wondering, was that something intentional, from your end?
Yes. I really admire that you picked up on that. That’s actually the first time someone’s asked me about this. I decided not to include a lot of main tourist spots and landmarks, because to me, this wasn’t a travel book. And I didn’t want it to appear like a travel brochure. To me, it was about the food. It was about the food of the region, and it was also about home cooking. The reason I included lifestyle images was to show: How did people eat this food? Like, you know, street food and where it comes from, or really where the food comes from. So that’s why I went to photograph a hairy crab farm, which is very unique to the Shanghai area. I wanted to portray this other side of Shanghai, as opposed the glamorous cityscape that we’re all aware of.

You mentioned how important it is for you to write this, having roots in Shanghai, rather than most books about the city that are by expats or visitors or travelers.
I’m not saying that people who didn’t grow up in the culture can’t write about it. And, you know, the books that exist about Chinese food and Shanghai food, they’re very academic. Don’t get me wrong—they’re good books. But food is just so personal, and so integral to symbolism and family and welcomed in Chinese culture. What I’m writing about is generational cooking. I’m a first-generation Chinese American in an American kitchen cooking these recipes, and I wanted to get that story out there.

I feel like we can’t talk about Shanghainese food without talking about hong shao rou. And in your book, there’s the classic pork belly recipe, but you also include ways to use it with fish and lion’s head meatballs. What is it about hong shao that makes it such a versatile technique?
Hong shao rou is definitely the most well-known version of this cooking technique. And it was one of the first dishes I truly wanted to master. It’s one of my mom’s signature dishes. That’s why I specifically call it “mom’s red braised pork belly.” And it’s a dish she makes every time we come back home, especially now that we’re not at home as frequently. So it’s really about the technique of using soy sauces, sugar, wine, and certain aromatics like star anise. The beauty of hong shao is that, depending on what protein you use, it changes the entire flavor of the dish.

The pork belly version is super caramelly and very aromatic and melty. But when you use it for fish, it’s got a lot of the same characteristics, but fish, by nature, is a completely different protein, different texture. It gives it almost a smoky flavor. And the fish is pan-fried, and it’s quicker, it’s not simmered as long as hong shao rou. And then, using it with the lion’s head meatball—it’s also pork, but it’s simmered for a much shorter time than hong shao rou. So it’s more like a complement to the meatball rather than the primary sauce, whereas I feel like hong shao is about the total sauce simmering and melding with the pork flavors for hours, if that makes sense. It’s not in the book, but I’ve done it with pan-fried tofu, too, then simmered with wine, soy sauce, and all of that.

I also love how much your book emphasizes scallions, beyond using them as a garnish.
I was a little nervous putting so many scallion recipes: noodles, roasted fish, chicken, braised fava . . . it’s almost like the whole “Spring” chapter is scallions! But in the end, you know, I put it in because, to me, there are so many different ways to use it. For some dishes, it’s a quick fry for a burst of flavor from the scallion. For some, you’re using it as actual sauce, like the scallion oil chicken. For the scallion oil noodles, you’re cooking it over low heat to really draw out the flavors over 20 minutes or longer. And it creates this really nice oil.

I tested the scallion oil noodles recipe ten times, just to get it the way I want. The scallion roasted fish, it’s called cong kao yu. It’s not technically roasted in the American sense of roasting in an oven. But “cong kao” refers to the caramelization of the onion and the way that is used as a basis for cooking the fish. That dish is very scented with scallion, and the way that we caramelize it and braise it almost gives it a smoky flavor, which is why it’s called roasted.

When you traveled to shoot the photographs for this book, were you experiencing Shanghai with a new lens?
It’s very humbling. And I definitely relied on my family there and [my husband] Alex’s family there for their connections. Alex’s uncle gets the hairy crab every year, so he personally knew the crab farmers. Everyone we met, even people that we didn’t have connections to, like the street vendors, were so interested in what we were doing and loved talking about their food. It was truly a big unifier—despite speaking Mandarin fluently, I’m clearly not a native.

In the book, you mentioned when people describe food from Jiangsu region as sweet, it does it a disservice. How do you describe Jiangsu cuisine?
When I was creating the proposal for this book and talking to people, I was like, it’s really hard to describe Shanghainese food. It’s not like Sichuan food—you know, and this might be oversimplifying it, too, but [Sichuan food is] very recognizably fiery and spicy and bold. Shanghainese food is subtle. And in my home cooking and research about it, I just found that it’s all about ingredients, and highlighting natural flavors, and trying to augment that as opposed to overpowering whatever produce or vegetable or protein is being served.

So I tried to focus on that. I also tried to focus on how really vibrant and fresh it is, because Chinese people eat very seasonally. And that’s something that I feel like not a lot of people associate with Chinese food, when in fact, that’s how we’ve been eating for centuries. Yes, we use sugar a lot, but I think that just calling it sweet without acknowledging any of the other flavors would be oversimplifying it. TWO EXCITING RECIPES FROM MY SHANGHAI:

Mom’s Shanghai Red Braised Pork Belly
If there is one dish that represents Shanghai cuisine, this is the one.

Scallion Oil Noodles
A quintessential old Shanghai dish that makes use of slow-cooked scallions to infuse a rich, umami flavor.

Last week, we spoke with Barry Estabrook about his personal journey to understand the absurdity of the diet industrial complex, which he documents in his book Just Eat.

What makes a perfect pie? Our interview with Petra Paredez of Petee’s Pie Company reveals that it’s all about the crust.