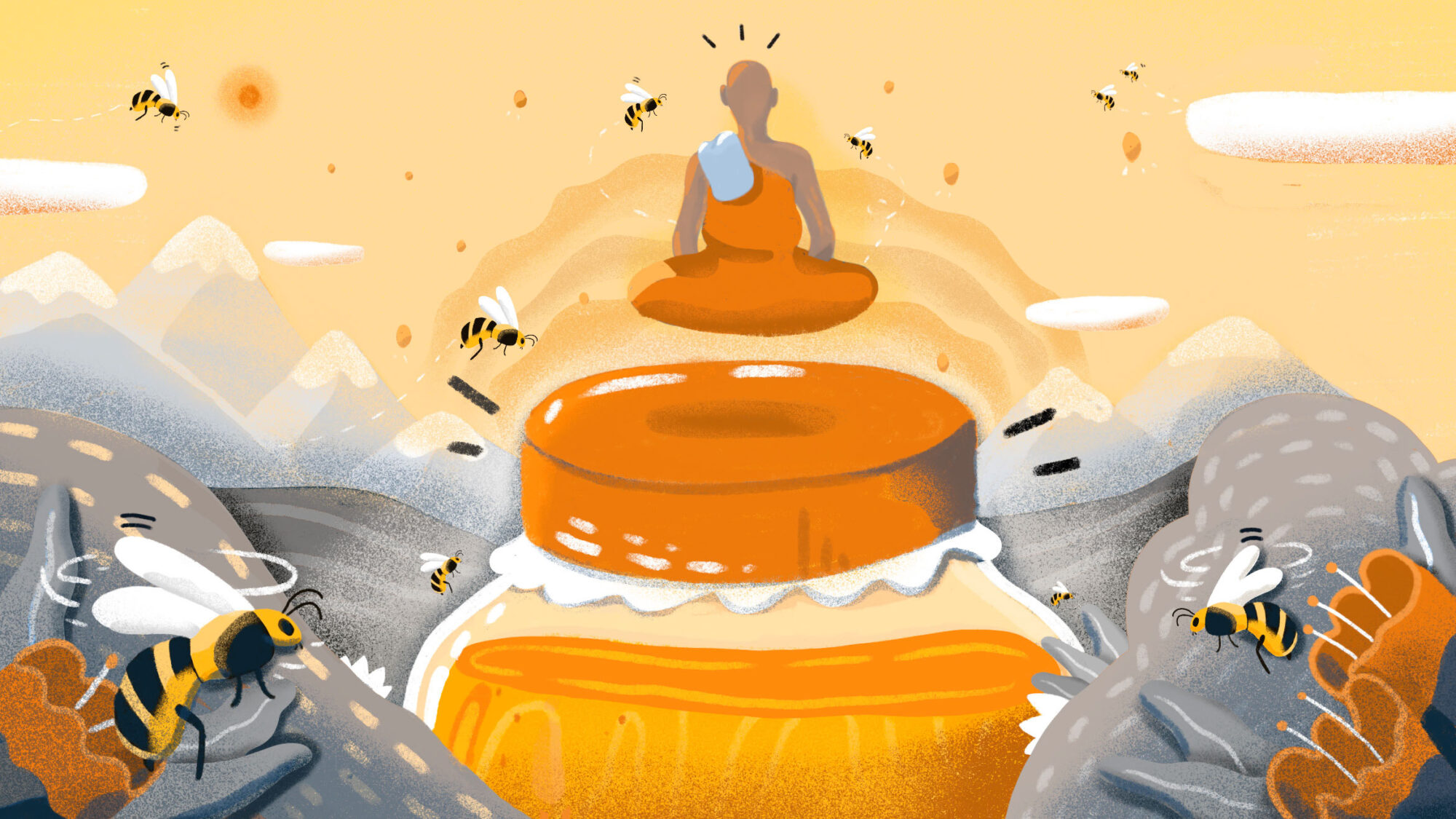 It claims that it will ward off superbugs and make you beautiful. At $1,780 for a jar of honey, do we believe it?

A few months ago, Palisa Anderson, the owner of the Thai grocery store Jarern Chai in Sydney, Australia, pressed a jar of honey into my hands. She said, “Take this—it is magical.” The honey, Vallentine’s, has a label that reads: “World’s strongest honey. Three times stronger than manuka!”

Anderson rattled off the honey’s miraculous properties: it helps with digestion; it’s a topical cure for insect bites and burns; she and her children take it at the first sign of a cold. “This will boost your immune system, and protect you from germs—especially on airplanes,” she assured me. As someone who travels extensively for work, spending hundreds of hours in the air crisscrossing the world, I live in mortal fear of germs.

I took the honey. The fact that manuka has become a reference point for the potency and healing power of medicinal honey illustrates just how embedded it has become within popular consumer culture. Of course, manuka isn’t the first honey to be used as a cure for various ailments. From ancient Egypt to Rome, Chinese to Ayurvedic healing, honey has a long tradition of being used as medicine. The Koran mentions honey as “a remedy for every illness,” and if you can think of a medical condition—impotence, tuberculosis, gout, snake bites, poor eyesight, herpes—honey was, at some point, probably thought to be its cure.

But in recent years, manuka honey, or honey made by bees that pollinate the manuka bush, has risen to the status of miracle worker. An eight-ounce jar of the stuff can sell for as much as $1,780. On Gwyneth Paltrow’s lifestyle site Goop, a trio of jars from the brand Activist costs $150. The value of the name “manuka” is so bankable that it has created a rift between Australia and New Zealand over who can use the term. (New Zealand is currently trying to trademark the word “manuka,” but as of this writing, there are no legal restrictions on who can use the term.) There is counterfeit manuka, sparkling manuka mead, manuka acne-preventing face oil, manuka candles, manuka-flavored Tim Tams, mussels smoked in hot manuka, and manuka face masks at TJ Maxx, all of which may or may not contain actual manuka. It’s hard to think of another ingredient—that isn’t prized for a tangible flavor or scent—that has infiltrated the market in quite the way manuka has.

Unless you are adept at locating and deciphering scientific papers, it can be hard to tell exactly what, if anything, is so special about manuka—and even harder to determine why it has gained such immense cultural cachet. I spent weeks digging through articles and archives, and I still came away confused about which medicinal properties have been scientifically proven, and which of those results are applicable to human topical application and consumption.

What is known for sure: manuka’s unusual antimicrobial properties were discovered by Professor Peter Molan at Waikato University in New Zealand in the 1980s. Honey made from bees that feed on the manuka plant (a flowering shrub found in New Zealand with close relatives that grow in Australia, and whose leaves the Maori people have also used medicinally) contains high levels of the antimicrobial compound methylglyoxal. And though the market varies wildly, generally, the most expensive jars of manuka are those containing extremely high concentrations of that compound.

What does this make manuka honey good for? Wound dressing. It is especially helpful for fighting superbugs, such as Staphylococcus, which is resistant to multiple antibiotics—so much so that it’s used in some hospitals in place of antibiotics. It can also help disperse and kill bacteria like Streptococcus. I found a number of articles from the 1990s detailing studies that showed manuka to be effective at treating peptic ulcers, and more recent studies have shown its effect in the treatment of chronic ulcers.

Unless you are adept at locating and deciphering scientific papers, it can be hard to tell exactly what, if anything, is so special about manuka

However, something tells me that most people buying $100 jars of manuka aren’t using it for dressing wounds or treating ulcers. Perhaps more important: Scarlett Johansson puts it on her face! Tennis star Novak Djokovic credits it with keeping him healthy! Kourtney Kardashian puts it in her smoothies! A nice lady at a shop told me it would help me avoid colds and flus on airplanes!

For many consumers, these kinds of personal or celebrity endorsements are so much more powerful than convoluted records of scientific studies. This is what makes the whole “wellness” movement so easy to deride—it’s also what sometimes leads to dangerous anti-science herd mentality (hello, measles outbreaks). And when the luxury and status of a ridiculously expensive product get thrown into the mix, our reactions become even more puzzling.

Dr. Yimin Cheng, a lecturer in marketing at Monash University in Melbourne, Australia, says that manuka’s popularity and ability to drive mini economies and trade disputes is about basic supply and demand—manuka accounts for a tiny percentage of the honey produced in the world—coupled with the perception that it’s beneficial to one’s health, even if most consumers don’t fully understand what the benefits are. “We tend to simplify our daily cognition by making categorizations. We label things as good versus bad, black versus white, healthy versus unhealthy, products with benefits or without.”

But Cheng also guesses that manuka as a recognizable term aligned with luxury and health has something to do with unseen forces. “Manuka honey has gained international awareness and reputation over the years thanks to the collective marketing effort of the entire manuka honey industry, as well as the New Zealand government, which sets up the national standard of this product.” In the same way the avocado industry spent millions to educate consumers about “good fat,” so too has manuka carved out its own virtuous corner among the sugars.

In recent months, I’ve started thinking differently about why products like manuka—or even alternative therapies that have no scientific backing—have become so popular, especially among women. A friend struggling with chronic pain and fertility issues told me that she had taken up acupuncture, and that, in some ways, she didn’t even care if it was proven to work. “Doctors don’t listen to me,” she said. “At least the acupuncturist really seems to care about my pain. She listens to me.”

I felt the same way about Anderson handing me the honey in her shop; she showed an interest, and her remedy mattered more as a result. Manuka’s omnipresence and aggressive popularity certainly have something to do with honey as an all-natural, comforting remedy; but they may also be because manuka is one of the wellness movement’s few darlings backed up by science: studies have shown  that “honey, in general, and particularly manuka honey, has potent inhibitory activity against the influenza virus.” Does it work if you swallow a spoonful, rather than isolate the virus in a Petri dish? Who knows? But my friend said it worked, and it can’t hurt to try.