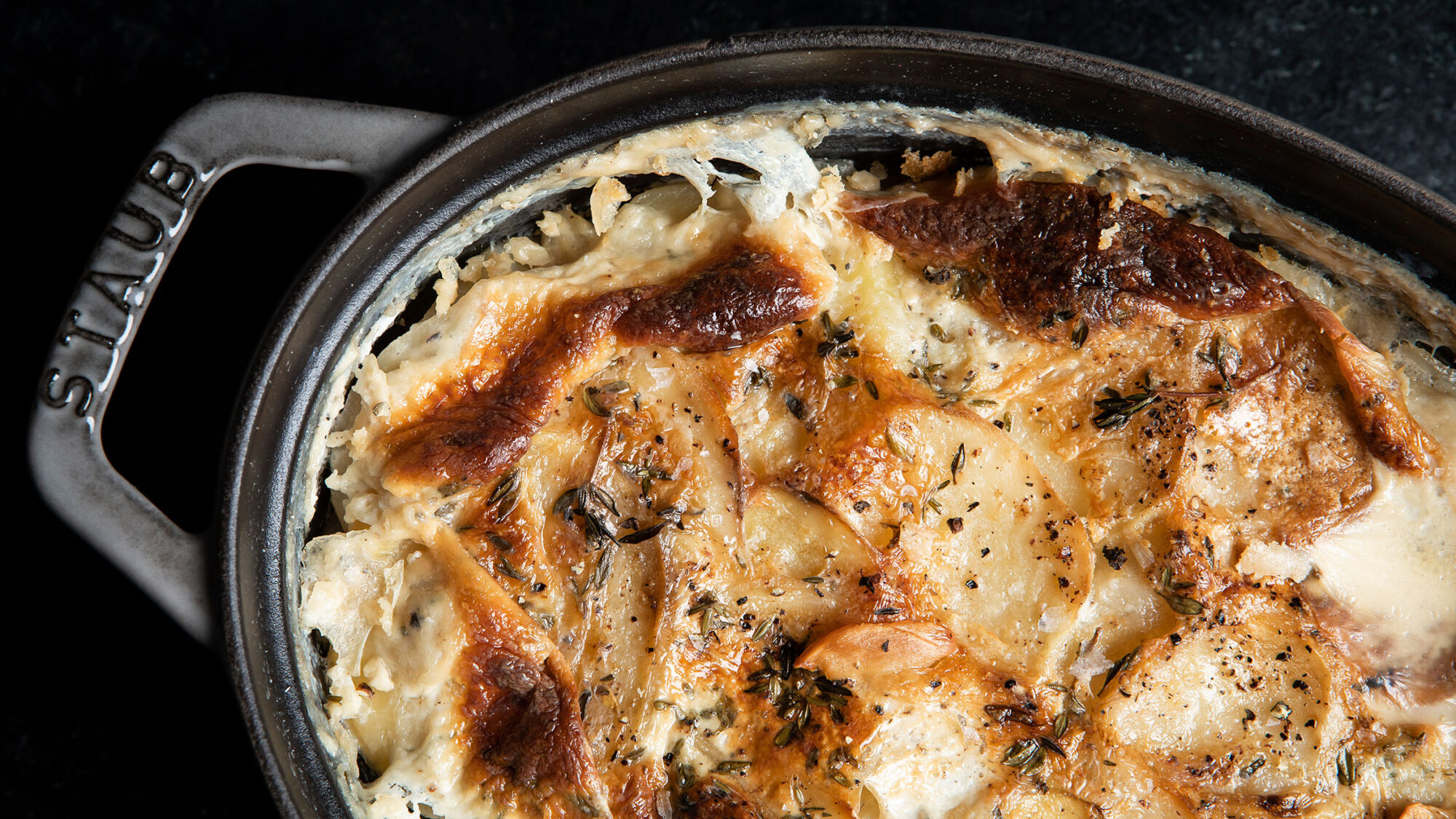 Gratins are a low-maintenance, high-payoff way to potato.

Mashed potatoes are a high-maintenance side, and a Pyrrhic one at that. Getting them smooth enough, seasoned enough, and hot enough—at precisely the same time—is a tall order for restaurants, and near impossible for an overextended home cook. Even if you hit all the marks, once served, your ticking-time-bomb potatoes are poised to solidify into shellac as they cool on the plate, making them little more than a starchy vehicle for gravy. I understand that this is, in fact, the appeal of mashed potatoes for many (the gravy part), but ultimately, doesn’t this imply that mashed potatoes aren’t that good to begin with?

Despite these hard facts, we cling to the tradition of squished spuds as though there were no alternative, selling both potatoes and ourselves short. Gratin dauphinois (referred to almost universally in America as “scalloped potatoes”) is an elegant solution to this conundrum and is almost identical to mashed in its makeup. The potatoes are sliced and stacked with a few bits of garlic and thyme and covered with cream, milk, and butter, the potato slivers cooked to perfect tenderness while forming a starch-thickened sauce in the casserole dish (or Dutch oven). Oftentimes, American versions are topped with a crown of melted cheddar or Gruyère, although the classic French gratin dauphinois is not. With or without the toasted cheese layer, the result is a scoopable strata of collapsing potatoes and savory cream.

Gratin dauphinois was one of the first dishes Thierry Breton, chef and owner of La Pointe du Grouin and Chez Casimir in Paris, learned when he first started at the Hôtel Ritz Paris kitchen in 1994. He calls it “a magnificent dish, absolutely emblematic of French cuisine.” According to Thierry, the secret is “potatoes peeled and sliced thick, which above all must never be rinsed” for risk of losing their vital starch. French markets are equipped with heirloom varieties appropriate for the job, but for everyone else, classic russets are a consummate choice.

In France, this gratin is sold by weight from large trays at every traiteur, or prepared food shop, but it’s a breeze to make, especially if you have a mandoline. Bringing your potatoes and milk to a boil on the stove before baking will save you 15 to 20 minutes of cooking time, and then you can throw them in the oven with whatever else you’re making so they’re ready when your rib roast is.

Since I don’t always keep a quart of half-and-half in the refrigerator, I’ve also taken to a variation of gratin introduced to me by my Australian building manager, Steve, whose mother made it by layering potato with onion and a generous amount of olive oil—replacing the dairy—as they do in her native Malta. It’s so easy to make that you don’t need to wait for a holiday, or even a meaty centerpiece to come along—just add salad and a glass of chalky white Savoie wine, and call it a day.