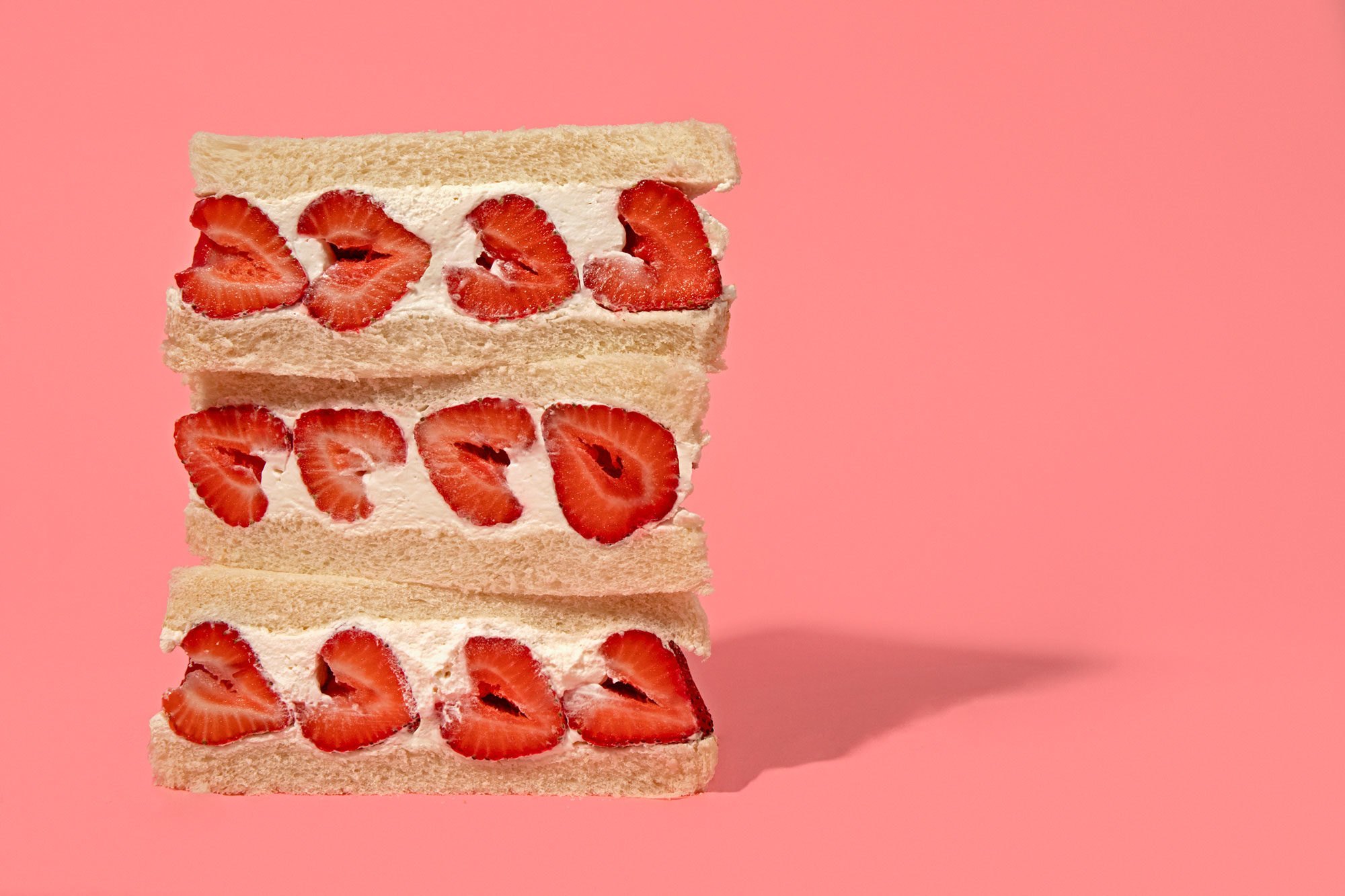 The cult-favorite conbini snack is a low-effort, high-reward dessert.

Between two triangular slices of fluffier-than-a-cloud Japanese milk bread, ruby-red strawberries line up against a thick layer of whipped cream. It’s fluffy and fruity, with a touch of sweetness that keeps it snackable, but it looks dainty enough to be deserving of a spot at afternoon tea. Behold, the strawberry sando.

A fruit sando is exactly what it sounds like: a fruit sandwich, made with everything from strawberries to bananas, placed between crustless bread with whipped cream. Just like its convenience store sando cousins egg salad and pork katsu, fruit sandos are a staple of Japan’s most unpretentious—and popular—trio of eating destinations: 7-Eleven, Lawson, and Family Mart. They embody what’s most beloved about conbini snacks: They’re widely accessible, affordable, and tinged with school-lunch nostalgia.

But when Japanese convenience stores are a plane ride away, the fruit sando can be easily re-created at home. There’s no baking involved (unless you’re going the made-from-scratch route with the milk bread.) And there aren’t any secret ingredients here, either: just milk bread, heavy cream, sugar, and strawberries. The presentation looks fussy, but it doesn’t involve much more than whipping a carton of cream until it’s spreadable and aligning strawberries across a slice of bread’s diagonal axis, followed by a careful cut along that axis to reveal a picturesque cross section of strawberries.

If you think about it, these sweet sandos are like a simplified cake—specifically, those spongy white cakes seen at Asian bakery chains like Fay Da or Paris Baguette, covered in light-as-air cream and adorned with a border of fruit cocktail on top. But while those fruity cakes have their place at birthdays, weddings, or New Year celebrations, the sando makes the case for its easy, everyday appeal.

That humble act of cross-section cutting is what makes it feel like you’re eating something greater than a plain old sandwich made with bread, cream, and strawberries. In its own small way, it elevates the joy of an ordinary snack with a greater attention to detail to make it feel a little more special. Plus, the milk-bread-plus-cream blueprint is conducive to other small, juicy fruit slices that span the ROYGBIV spectrum. Each sando is an opportunity to play with a kaleidoscope of triangular wedges of oranges, medallions of kiwis, half-moons of grapes, and slivers of peaches.

Instead of a pint of ice cream or a store-bought fruit salad, consider a stack of strawberry-stuffed sandwiches for your next impromptu picnic. It’s a little more effort than stopping by a bodega, but way less laborious than rolling out tart dough and preheating the oven. Making a fruit sando is a piece of cake, and it honestly tastes better than one, too.