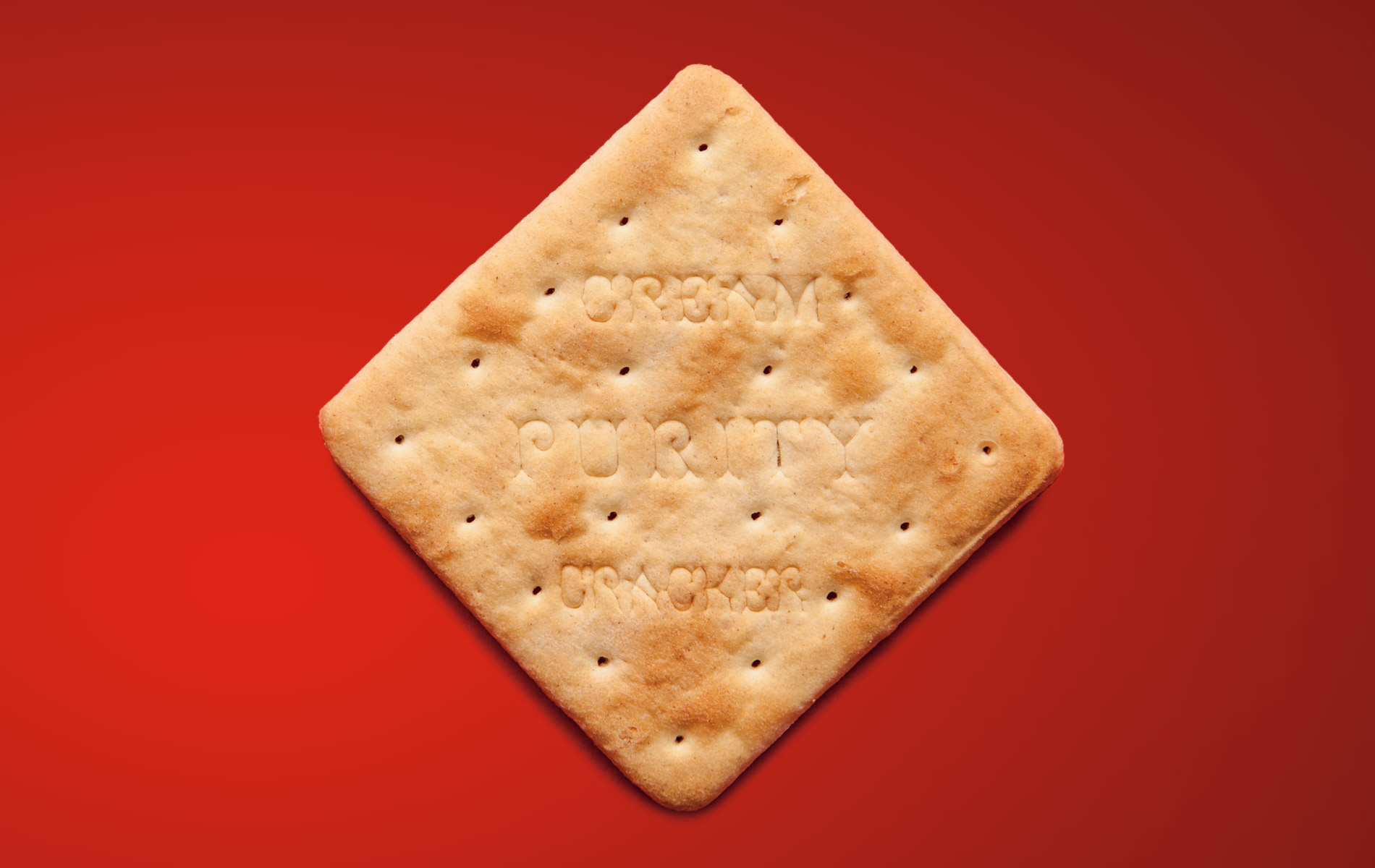 For almost 100 years, Purity Foods has been the taste of home for Newfoundlanders, from hearty fishermen to kids at Christmas parties.

To crack into a box of Purity cream crackers is to know a distinctly Canadian pleasure. Pull back the inner parchment-paper wrapper, and you’ll see three-inch pale brown squares, docked with small holes, with the brand name stamped on the surface. The secret to the cracker’s flaky crumb and rich flavor comes from its second ingredient after flour: lard. This cream cracker is the rich Canadian cousin of the lean saltine.

Purity Foods was established in 1924, at a time when cod were caught in abundance in Newfoundland, a province off the eastern coast of Canada. “The Rock,” as locals fondly call it, gets its character from the hardy and fiercely proud people—indigenous, English, Irish, and French—who have called it home for hundreds of years. They labored as fishermen, miners, and loggers in this rugged and picturesque place.

You’d be hard-pressed to find a kitchen cupboard from Corner Brook to St. John’s that didn’t have a box of cream crackers in it. Purity has long made products to suit local tastes. Partridgeberry & Apple Jam is made with a wild acidic red berry, related to cranberry (called lingonberry in Scandinavia). There’s also tinned Salt Fish, Bull’s Eyes candy made with molasses, and cookies with nursery-school names like Jam Jams and Tea Vees.

For almost 70 years they’ve been the only source of Hard Bread on the island, a biscuit made with flour, salt, and water that’s an ancient staple of fishermen. It’s a key ingredient, along with salt cod, in the rustic local stew, “Fish ‘N’ Brewis,” served with “scruncheons,” crisp, golden lardons of fried salt pork, and a spoonful of the rendered fat. In her book Snacks: A Canadian Food History, Janis Thiessen writes, “Hard Bread is also ground by Purity and sold to locals who use it to make moose sausages.” Jeremy Bonia co-owns and serves as sommelier for Raymonds and the Merchant Tavern, two restaurants that have food writers and enthusiasts flocking to St. John’s. “Purity is an iconic brand on the island and represents home and the nostalgia of childhood,” he says. “I don’t know of a store that doesn’t carry their products, even tiny convenience stores.”

The first products from the Purity line were candies like Peppermint Nobs and flavored syrups. The red-and-white pill-shaped candies are still stretched by hand and are the kind of hard candy you find in the purses and cut-glass dishes of Newfoundland “grans.” To this day, Purity’s flavored syrups like strawberry and fruit punch are most popular at Christmastime. “You’d go to people’s houses during the holidays, and while the adults were drinking alcohol, the kids were offered Purity syrup,” says Bonia. “Depending on the house, it would be mixed with water, 7UP or ginger ale.”

In the 1930s, a baking line was added for crackers and cookies. The line contains two of the company’s best-selling products, Jam Jams and Cream Crackers. The former have a tender, cake-like texture and taste of molasses and lemon. Two cookies are stuck together with Partridgeberry & Apple Jam. They’re about as old-fashioned as it gets, a far cry from the glut of crisp, crunchy cookies on the market today. “Jam Jams were definitely a treat,” says chef Katie Hayes of the Bonavista Social Club in picturesque Upper Amherst Cove. “If they were in the house, they would last about a minute and a half.”

As factories go, Purity is a small one, with just 65 employees. When local chefs tell you where it’s located, they never fail to mention it’s right across the street from Big Erics, a restaurant supply store. “Anytime I’m in St. John’s, I have to stop for kitchen supplies,” says Hayes. “The smell from the Purity factory is like no other.” Most of the production never leaves the island. But a few of the popular items can be found in grocery stores across Canada. Heather Spurrell, the marketing coordinator at Purity, says, “We sell about 65 percent of our products in Newfoundland, 30 percent throughout Canada, and the rest is in the U.S.” Diehard fans at a distance can still satisfy their cravings through the online shop. A package of Jam Jams painted by Ash Smallwood, an artist from St. John’s

Purity’s branding hasn’t changed much in the company’s 90 years. Their ads are often tongue in cheek and are meant to get a laugh out of locals. A holiday ad for the syrup reads, “For When Mom’s Turkey Is Dry AF…” There are recipes on the website for “Jam Jam Trifle” and “Cream Cracker Flakeys,” a homely mille-feuille with vanilla pudding, Cool Whip, and bananas. There’s also a recipe for a heavenly sounding fishcake made with their salt fish, potatoes, parsnips, and salt pork.

Ash Smallwood is an artist who lives in Toronto but hails from St. John’s. She paints popular Canadian snacks, and—no surprise—Newfoundland goods feature prominently. Purity Peanut Butter Kisses, soft taffy with a peanut butter center, are her favorite. Snack Paintings, her Instagram account, is full of Jam Jams, Hard Bread, and Cream Crackers. Purity bought all of her original paintings to hang in the factory. But she still sells prints and pins. “A lot of my customers are all over the world,” she says. “They order a print or a little Jam Jams pin to remind them of the Rock.”

Visitors to St. John’s are always welcome to stop by the factory during the week to buy a T-shirt or a case of cookies or crackers. In a place that still feels remote and keeps mostly to itself, Purity is part of Newfoundland’s hard-won prosperity. Take Jam Jams, Hard Bread, or Cream Crackers out of local kitchens, and there would be a hole in Newfoundland’s heart.