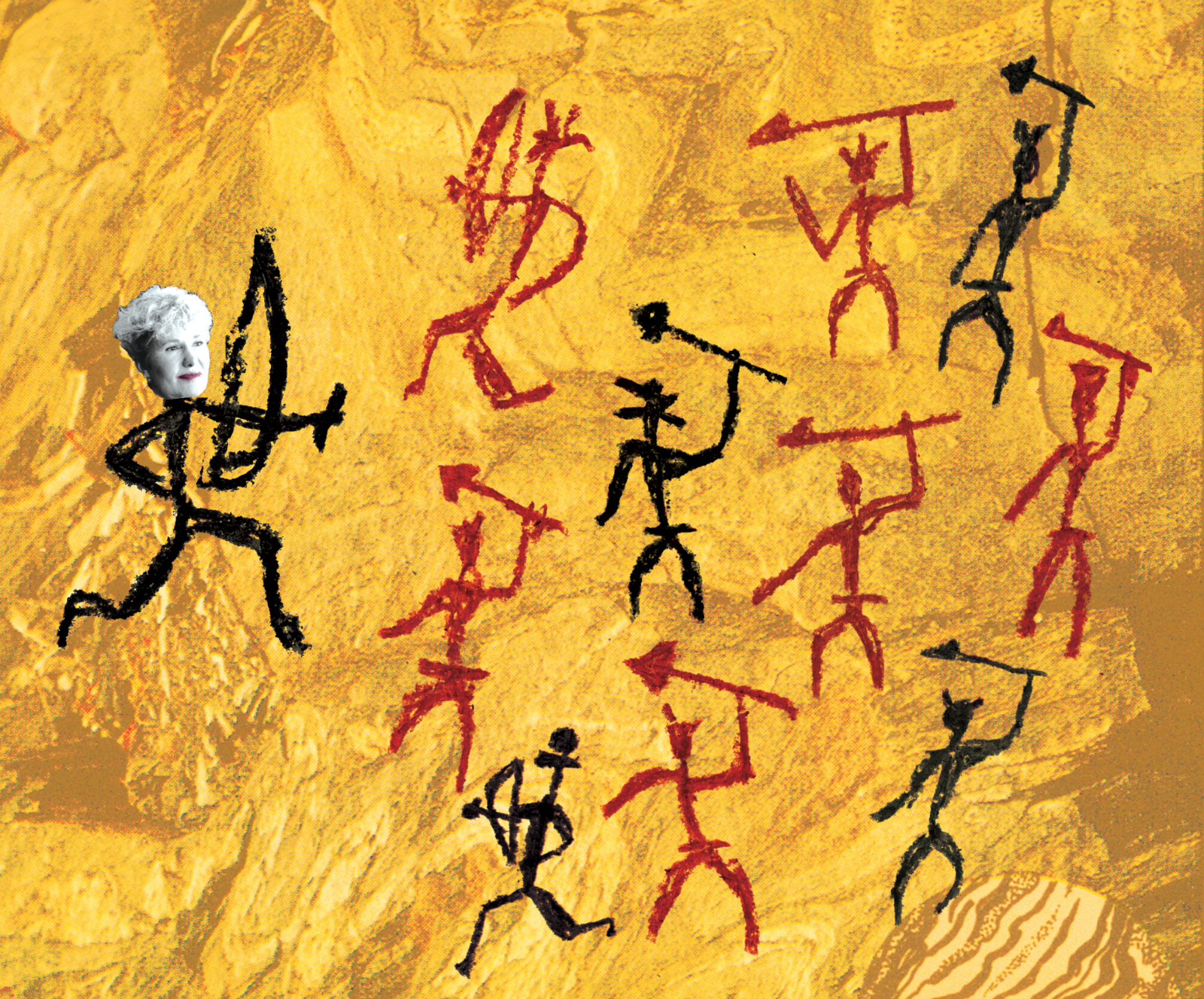 Outspoken author challenges many healthy eating conventions, including the “theory” of cholesterol.

Though Sally Fallon Morell’s Nourishing Traditions: The Cookbook That Challenges Politically Correct Nutrition and Diet Dictocrats, was first published in 1995, I encountered it in 2008, as a graduate student living and cooking in Florida. I’d picked it up out of curiosity: I wasn’t an adherent of any particular dietary philosophy; I had the vague awareness of what, in our country, got categorized as “unhealthy” and “healthy” foods. But Fallon Morell’s heavily researched writings seemed to argue against nutritional advice that was, for example, stressed by the USDA’s food pyramid.

In Nourishing Traditions, Fallon Morell touted the benefits of butter, high-cholesterol foods, and saturated fats—which, she argued, actually protected the heart. She made cases against low-fat, no-cholesterol, and reduced-sodium foods, advocating instead for traditional diets and their staple foods. Fallon Morell’s cookbook was based on the teachings of Weston A. Price, a nutritionist who cautioned that animal fats weren’t dietary enemies, like the prevailing low-fat diet cautioned, but necessities—and that raw milk, organ meats, and other rich, traditional foods led to better, not worse, health.

As an enthusiastic home cook, I was fascinated by the traditional recipes and processes that Nourishing Traditions shed light on: I tried, for the first time, my hand at pâtés and sourdough bread; I learned how easy it is to sprout grains and seeds and coax surprising flavor from food. And it was all in the name of nutrition. They’re foods that are now, at long last, coming into something like fashion—think artisanal pickles, bone-broth restaurants, high-profile bakeries, and the paleo diet (Fallon Morell has a bone to pick with the paleo diet).

She is also the author of many other books, including Nourishing Broths and, most recently, Nourishing Fats: Why We Need Animal Fats for Health and Happiness, which espouses one of the main Weston A. Price Foundation tenets: Fat—particularly animal fat—is not only good for you; it’s essential. We talked about the paleo diet, good fats, and the cholesterol “theory.”

How did you get interested in discrediting the low-fat diet?
I’ve always loved to cook, and I came from a family of people who like to cook. We had bone broth growing up, and lots of butter. In the 1970s, I read Dr. Price’s book, Nutrition and Physical Degeneration, and raised my family that way, with a high-fat diet. We’re all very healthy and didn’t need braces.

I wrote Nourishing Traditions because I was so concerned about how the low-fat diet was being promoted as a healthy diet and was being promoted for children. But children really need fats for normal growth. Look at what we’re seeing today. We’re seeing an absolute epidemic of neurological problems, learning disorders, behavior disorders, growth problems, digestive problems in our children. And the number-one reason for that is the dietary guidelines. It’s a starvation diet, and basically our children are starving.

Nourishing Traditions was really what started the bone-broth and the fermented-food movements, and the interest in the traditional diets. It was taken over by the paleo people. And that diet is not the diet I recommend at all—it’s way too low in fat and not enough carbs, actually.

Tell me more about what’s wrong with the paleo diet.
I set up the Weston A. Price Foundation to promote the principles of traditional diets, and along comes this paleo diet, which claims to be doing the same thing but is completely wrong. Just to give you an example, the first thing traditional, nonindustrialized people ate was the organ meats. Usually they pulled the liver out and ate it raw. In Europe, they cook the organ meats into these beautiful pâtés. But there are no organ meats in these paleo diets—at least not mentioned by the main spokespeople for these diets. These people are also very much against grains, and yet grains are a part of many, many traditional diets. Even people considered very primitive were growing grains and eating grains, so there’s no reason to exclude them; they just need to be properly prepared. And the original writers of the paleo diet didn’t say anything about broth. It was all lean meat. But traditional cultures never ate lean meat. They knew lean meat would make them sick.

What’s wrong with lean meat?
Our first clue is from people who lived with the Indians and the Eskimos—people like Samuel Hearne, who was the first European to live with the Indians. They always ate the fat with the meat, and they told him they’d get sick if they didn’t eat the fat. Well, now we have an excellent scientific explanation for this. When you eat protein, you need vitamin A to use that protein. If you’re just eating lean meat and protein powders, you’ll deplete your body of vitamin A. Then you’re gonna have real problems. You’re gonna have fatigue, and you’re gonna have immune dysfunction. You’ll have all sorts of strange autoimmunity problems. When you eat the fats and the organ meats, you’re getting the vitamin A and a lot of other cofactors that you need to use these proteins.

Is it annoying or upsetting that the paleo diet has gotten so much attention? It’s almost like a low-fat diet—a different faulty diet coming back.
It’s the puritanical diet all over again. Yeah, it’s extremely annoying! It’s extremely annoying, but I think eventually people start to see the problems. There must be hundreds of books on the paleo diet. And some of the later ones do include fats and organ meats and bone broth and soaking grains. But they’re giving credit to the paleo movement and not to the Weston A. Price Foundation. Nourishing Traditions was first published in 1995 and has been reprinted many times over.

What would you recommend as an easy way to improve a typical American diet, sans anxiety?
First, I would say: Have a good breakfast. And a good breakfast is not cereal from a box. It’s not Pop-Tarts; it’s not a donut. It’s real food. It would be scrambled eggs and bacon—that’s a good traditional breakfast. Or make yourself an omelet, or make yourself some oatmeal that you’ve soaked overnight and have it with some butter and a natural sweetener. That’s a delicious breakfast. And it will last you all morning. You won’t feel like going to the vending machine when you eat a breakfast like that. The second thing is get rid of all the industrial fats and oils—the cooking oils, the margarines, the spreads, and the shortenings. They don’t support life. Dump one of those tubs of spread in your kitchen, keep it out, and nothing will happen. If you put butter on a plate it will get mold on it. If you put Crisco outside nothing will eat it; if you put butter outside the birds will eat it. If this garbage won’t support microbial life, why would we think it would support our life? Use traditional fats and oils: olive oil for your salad dressing, butter for your vegetables and your bread, and cook in animal fats like lard or bacon fat or duck fat, goose fat, or tallow.

One of the fats that I’m using more of these days is duck fat, which you can buy in the health food store. Duck fat is a great source of vitamin K, which protects your heart and gives you healthy skin. So for example I’ll do potato wedges baked in duck fat. And it’s absolutely delicious.

What are your favorite recipes in your new book?
One of my favorites is the cheese spread, which has got grated sharp cheddar cheese, butter, cayenne pepper, and some fish sauce and sherry in it. Oh, it’s just to die for. It’s really good. I have a very good pâté recipe; I have a terrine made with liver and pork. Let’s see, there’s a really nice Crock-Pot or slow cooker bean recipe that you cook with sausage and marrow bone. And marrow is 90 percent fat, and the marrow comes down into the beans and kind of thickens them. It’s a neat recipe. Really nice butter cookie, spice cookie.

There’s a small number of people who have seen the light and also seen their children’s health improve when they get on this diet. We like to call it the “Yes you can” diet. It’s the “wise traditions” diet, but it’s also the “Yes you can” diet. Because you can have fats, salt, sauces, soft drinks (like kombucha), pickles, grains. You can have desserts; you can have everything. They just have to be made with the right ingredients. And properly prepared.

In the early aughts, when most of the country was still under the impression that animal fats were unhealthy, Sally Fallon Morell was a voice of reason. In her book Nourishing Traditions, she argued that fat is important for growth, brain and nervous system functions, and even disease prevention. Luckily, most people have come around to the idea of “good fats” and can now enjoy this amazing cheddar cheese spread made with cheddar cheese, butter, and crème fraîche — sans guilt!