Get a free recipe
Subscribe
A Salad, a Condiment, a Sandwich Filling
By: Jenn de la Vega Photos: Sarah Keough 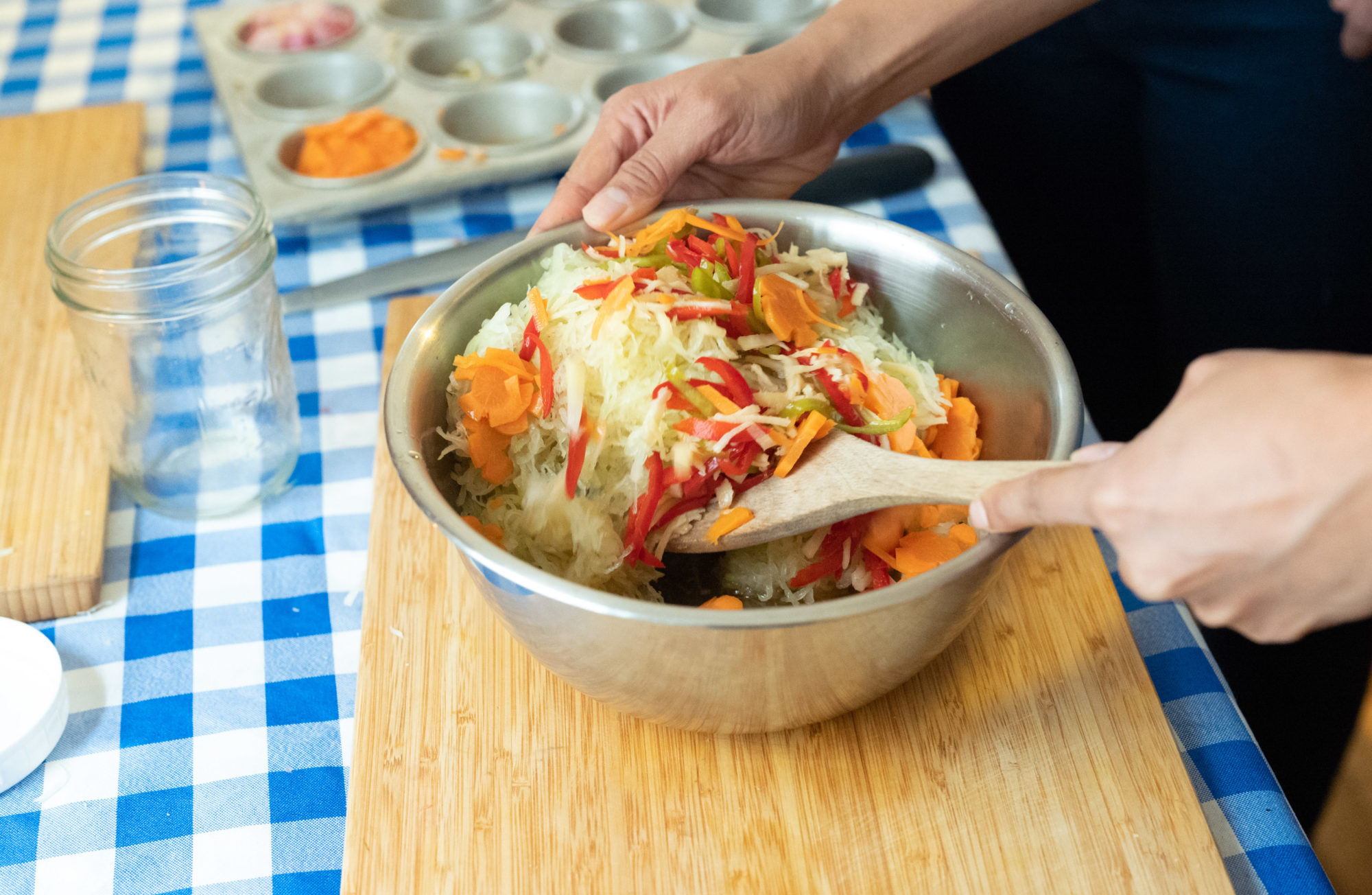 Like sauerkraut and Indian pickle, Filipino atchara started out as a way of preserving vegetables, like green papaya, without refrigeration. Today it’s a favorite crunchy topping for pulled pork, or it can be eaten as a salad on its own.

I held the delicate flower-shaped carrot slice between my grubby fingers. Like most children, I didn’t consider it with a careful look or sniff. I quickly shoved the pretty thing in my mouth and was surprised by its sour twang. Crinkling my nose, I scooted the rest of the atchara toward the far end of my plate, separating it from the rest of my lunch. Pickles can be a polarizing flavor for young palates. This translucent, noodle-esque haystack of julienned papaya with carrot flowers would appear whenever I was served Filipino food. As an adult, I make it often and have a hard time keeping it stocked in the house. To me, atchara matured into the perfect condiment for summer barbecue. Atchara, sometimes called atsara or achara, is a green papaya pickle. At first, it looks a little like sauerkraut with a tropical twist—or a relish. But in reality, it falls somewhere between these condiments and a crunchy side dish. You’ll find it accompanying grilled, roasted, and fried meats with rice—some of my favorites are crispy pata, deep-fried pork knuckle, and milkfish that is marinated in vinegar and then deep fried (it’s called bangus). Atchara’s tangy, syrupy brine cuts through rich flavors and offsets spiciness. In addition to cleansing oil off the palate, it aids digestion.

In some areas of the Philippines, atchara is known as ensalada (salad). The most traditional recipes use young papaya, carrots, onion, chile pepper, and occasional regional additions, like bitter melon, jicama, or moringa leaves. Some home cooks add raisins for extra sweetness. They can be a point of contention: My dad and I hate them and will fight you if you put them into our jars. For other types of pickles, the word “atchara” becomes an adjective in Tagalog: atcharang dampalit for pickled purslane, and atcharang lambong for bamboo. Preservation of the harvest is a practice that spans the world, elongating offerings into later seasons when produce may not be available, from winter to spring. Atchara comes from the Indian pickling tradition of achaar, which are generally finely chopped and brined with oil and spices like asafoetida, turmeric, and fenugreek. It’s also a cousin of Indonesian acar and Dutch atjar.

Dating back to the Iron Age, trade occurred between India and the Philippines. Hindu rajahs ruled the archipelago and ports for 2,000 years before Spanish colonization in the 1500s. To get to the Philippines, Indian traders would need to navigate over 2,800 miles by boat. Luckily, pickles travel well. They don’t require refrigeration and are ideal for long days on the South China Sea.

Papayas, though, are not native to India, but to Latin America. The Spanish not only brought their religion and culture with them; they also carried plants and seeds from their previous trades. Filipino atchara as we know it today came about in the 16th century, combining Indian technique with an ideal climate for growing tropical fruit. The domestic refrigerator would not be invented until 1913 in the United States—and not make it to the Philippines until American occupation during World War II. The tradition of atchara lives on because refrigeration still remains quite a privilege and is not viable in some rural areas today. This recipe for atchara is not a quick pickle of boiled brine and vegetables. It starts by tossing shredded papaya with a tablespoon of salt. This step draws out the lactic acid that kick-starts fermentation, and along with it, lots of water. Lessening the fiber’s water activity level leaves no chance for microorganisms to flourish and allows the pickle to last without refrigeration. The papaya is then drained and squeezed, sometimes with an old T-shirt. Like a sponge that’s been wrung out, it’s now ready to soak up whatever liquid you submerge it in—in this case, sweetened cider vinegar that’s seasoned with shallots, ginger, and chiles. For most of my life, I’ve only known atchara as a supporting actor. But earlier this year, I was selling adobo pulled-pork sliders in New York at MoMA P.S. 1 for Bubble T’s Lunar New Year party. I put out jars of atchara—for people to add as much as they liked to their sandwiches. Over the course of the night, I sold out of pork. All I had left were potato buns and a spare container of atchara. Over the bass-heavy dance music, a customer pointed to the jar, offering me money for a pickle slider. I narrowed my eyes, thinking, “That’s a garnish, not a sandwich filling!” But I shrugged and served it. They walked away, and I felt like I’d swindled them. I ended up selling a few more—people were seeking out a vegan party snack. After I cleaned up, I tried it. It was crunchy, sweet, and satisfying with beer.

My auntie Minda’s mom and my great-grandmother, Bai Amparing, was rumored to have the best atchara recipe in the family. She would make jars as pasalubong, or gifts, for those traveling back to the United States. Atchara is perfect with fatty grilled foods. It’s extremely rewarding to throw tongfuls on hot dogs or burgers and between bites of smoky rib bones.

Auntie grew up using lasuna, a very tiny variety of shallot. Try to get the smallest shallots you can find and cut them into ½” chunks, keeping the rings intact. Many other recipes will tell you to let the papaya soak for hours, but Auntie says tossing the papaya over the course of 30 minutes will render enough water. Squeezing all of it out with a cheesecloth is akin to making latkes or hash browns. You can keep the salty, papain laden run-off for meat marinades or constituting beans. Minda says the carrot flowers should be strategically placed along the circumference of the jar to invite people to try it.

Don’t throw away the brine when you finish the jar. Use it as a starter for the next batch or dilute it with a bit of water to make a quick switchel or pickle back shot to accompany whiskey.