Get a free recipe
Subscribe
Sa-shi-su-se-so: The ABCs of Japanese Cooking
By: Hannah Kirshner 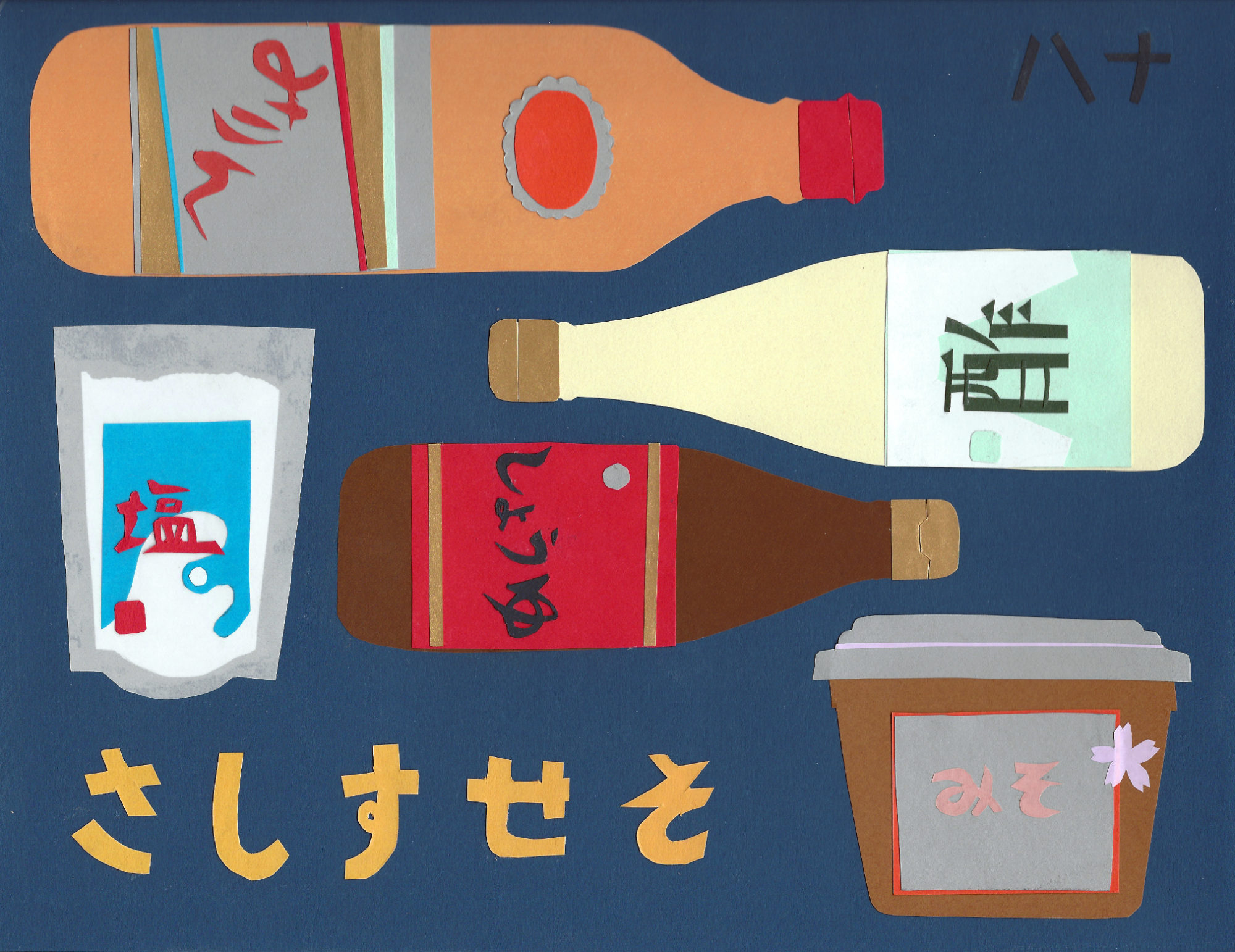 In rural Ishikawa, an outsider learns to cook with zero compromises.

My first kitchen in Japan taught me more about Japanese food than any cookbook. With a dorm-size refrigerator, two gas burners, and no oven but a broiler drawer just big enough to char a couple fillets of mackerel, it was a typical setup (whether for a tiny Tokyo flat or a bigger suburban or rural apartment like mine). I’d traveled all over Japan by train and bicycle, but 2015 was the first time I really lived there—and had my own kitchen—in the tiny town of Yamanaka onsen, in Ishikawa prefecture. When I arrived, my repertoire of Japanese dishes was like the phrases I had memorized: They could get me by for the simple things, but it was really hard to improvise.

Besides the chef’s knife I carried in my luggage, all the kitchenware in my Yamanaka apartment came from my landlady, Yoshiko, and her sister-in-law, Mie. They loaned me out-of-fashion tableware and extra pots and pans their grown children had used in college. Later I’d learn to make tamagoyaki (rolled omelet) with the rectangular frying pan and use this plastic thing with dime-size toothed holes to grate daikon. But for now they were a mystery. The counters hit barely above my hip and everything seemed comically small—except an old red-and-silver kettle big enough to make tea for a multigenerational family.

There were two rice cookers: Both women had been sure to give me that most important tool. Perplexed, I picked the one that looked newer and had more digital features labeled in characters I couldn’t read. I guessed that the large yellow button said “start” and cooked my inaugural meal in my new home. I was about to find out just how much I took for granted, besides being able to read the buttons on appliances. Tasks I breeze through on autopilot at home in New York became challenging if not impossible.

I’d wanted to live in Japan for as long as I can remember, so it is one of the great ironies of my life that I married a Japanese man who lives in New York because he didn’t want to be in Japan. I frequently head off to my husband’s homeland for months at a time without him—to learn about food and drinks and find things to write about. That little Japanese kitchen was the first of three (or more if you count staying with friends) I’ve had in Japan by now, all of them with similar constraints.

In Brooklyn we cook Japanese food as often as American staples like spaghetti marinara or California-style fish tacos. My husband grew up in a fifth-generation Tokyo family, and he seasons with soy sauce and mirin as intuitively as I (a child of the ’80s from the Pacific Northwest) use garlic and olive oil. When I’m doing the cooking, I holler from the kitchen, “Can you come taste this to see if it’s right?” He’ll tell me to add sugar to my kara-age (fried chicken) marinade, or more dashi to sauce for cold somen. When he says my firm Tokyo-style rice (they like it softer in Kansai) is better than his mom’s, I know I’ve hit the mark.

On my own in rural Ishikawa, trips to the supermarket took hours and utterly exhausted me. I’d wander the aisles, scanning packages with a translation app, trying to decipher the difference between types of sugar (or was that salt? MSG?), or wondering which package of tofu to choose amongst dozens. I grabbed familiar cans of stewed mackerel that we buy at the Japanese grocery in New York—if all else failed I could eat that with rice and call it dinner. Closely inspecting the wall of margarine (much easier to come by in a country mostly inhospitable to cows, and still considered healthy), I found a box of real Hokkaido butter. I didn’t care that it was wildly expensive; I needed that one Western indulgence.

The vegetable shop was easier: You don’t need to read to know that a carrot is a carrot. I learned to ask the shopkeeper, “What’s this? How do you cook it?” and memorized the words for boil, fry, and grill. She taught me to blanch purple kinjiso leaves and eat them with ponzu, and sold me slippery yellow wild mushrooms to put in miso soup. On less adventurous days, I’d pick up salad fixings—crisp lettuce, seedless cucumbers, and pale winter tomatoes that were surprisingly flavorful—always mindful of what would fit in my tiny fridge.

At the butcher I’d point to chicken legs, asking in uncertain Japanese, “That, please?” When the exchange was over I was flooded with relief: I’d succeeded in procuring all I’d need to make oyakodon, saucy salty-sweet chicken and eggs over rice. Watching other customers, I found out the butcher made kara-age (fried chicken) to order! I’d bring home two pieces: one to eat out of the greasy paper bag as soon as I walked through the door of my apartment, the other to have later with salad and rice (always waiting warm in the cooker). My kitchen in Brooklyn has compromises, too: The old gas range has powerful burners but a tiny oven that can accommodate only one half-sheet pan at a time. But oh, to have an oven! In Japan, when a friend invited me over to use hers, it turned out to be a glorified toaster-oven on the counter.

I couldn’t roast chicken or bake cake, but the setup was just right to make a typical Japanese meal of small vegetable dishes, broiled fish, miso soup, rice, and pickled vegetables. That rice cooker was invaluable: It freed up one of my two burners. A pot of miso soup lasted from dinner one night into breakfast or lunch the next day. I kept nimono, vegetables simmered in soy-tinted dashi, on the counter of the chilly kitchen like I’d seen in other people’s houses. I broiled oily fish. I quick-pickled cabbage with salt and yuzu peel, sliced up yellow takuan (dried and fermented daikon), or rationed out gifts from my favorite octogenarian neighbor: crinkly black soy-pickled coltsfoot and fuchsia sweet-tart mountain potato stem.

Friends wanted me to cook “American” food, but even pancakes turned out a little funny because of the difference in ingredients. I attempted to make upside-down cake in an iron pot (scorched), to make caramels without corn syrup or a candy thermometer (moderate success), and to toast granola on the stovetop (success!). I tried just about every “cheese” in the supermarket, hoping maybe this time it would be the real thing and not a processed analog. Maybe the Swiss? The mozzarella? The “melting cheese?” No, no, no. Exotic ingredients like rolled oats or Parmesan (that didn’t come out of a green shaker) required a trip to a big-city department store at least two hours away by bus and train.

It was easier to just cook Japanese. Why eat overpriced cereal and processed cheese when I could have just-caught fish and local miso? Why use papery dried herbs when I could get thick negi (green onions) grown a stone’s throw away? When a complex meal was too much effort, I relied on quick comfort foods like omurice (ketchup fried rice wrapped in an omelet) and yakisoba (a tangle of stir-fried cabbage and noodles), making them again and again until the recipes became my own.

I practiced the sa-shi-su-se-so—the abc’s—of Japanese cooking (a popular mnemonic). Sa is for satou, sugar (or mirin). Shi for shio, salt. Su is vinegar. Se (it’s a stretch) for shoyu, soy sauce. And so for miso. Dashi is to Japanese cuisine what butter is to French. It’s in everything. Like wine, a splash of sake opens the flavors of sauce or adds fragrance to steamed clams. By tasting these flavors every single day—in friends’ homes, restaurants, and my own kitchen—balancing sa-shi-su-se-so became intuitive.

Back in Brooklyn, I unpacked real mirin (fermented, golden, and sweet as cordial, not the stuff made with grain alcohol and corn syrup) for sauces, and bags of sake kasu (the aromatic sediment from brewing sake) to flavor fish and pickle cucumbers. But the most important thing I brought home was fluency in Japanese cooking, acquired from the structure of that kitchen and the vocabulary of available ingredients.

Lately, my husband and I communicate in Japanglish, mixing and hybridizing language as we please—and do the same in our kitchen. He makes an arugula salad with black rice vinegar, sesame oil, and shaved Parmesan. I add Old Bay to my yakisoba.

I spend at least a few months each year in Japan now, and I know what to pack from home. I bring a block of sharp cheddar for grilled cheese (a rectangular tamagoyaki pan is just the right size for one sandwich), and granola or cookies made in New York to give my friends. But mostly I switch to the culinary language that makes sense there. It’s easier to cook Japanese food in New York than the other way around, but the quality and variety of ingredients I can get in Japan is so much better. So I have two modes. Some things just don’t translate.

Yakisoba is one of the few childhood comfort foods that my husband and I have in common: he from Tokyo street vendors and his mom’s Saturday lunches, and me from a small-town supermarket outside Seattle. It has the irresistible salty-sweet soft-crispy taste and texture of junk food, but in essence it’s a healthy pile of stir-fried cabbage and onions with some noodles mixed in—crowned with a mess of condiments and toppings. It’s a quick meal that’s easy to cook in both Japanese and American kitchens.

Sosu (sauce), a Japanese version of Worcestershire, usually flavors the noodles. Some purists prefer just salt and pepper, but there are variations with curry powder or even tomato and “cheese.” Old Bay (my own unconventional variation) tastes an awful lot like the seasoning powder that usually comes with store-bought packages of the noodles. Yakisoba is made for improvisation: Add thinly sliced pork, rings of squid, or small shrimp as you like, use up whatever vegetable odds and ends you have, and substitute the noodles (if you must) with instant ramen or any curly yellow noodle (Chinatowns are rich with them).