Get a free recipe
Subscribe
How to Roast a Chicken? The Answers Are Horrifying.
By: JJ Goode Illustrations: Paige Vickers 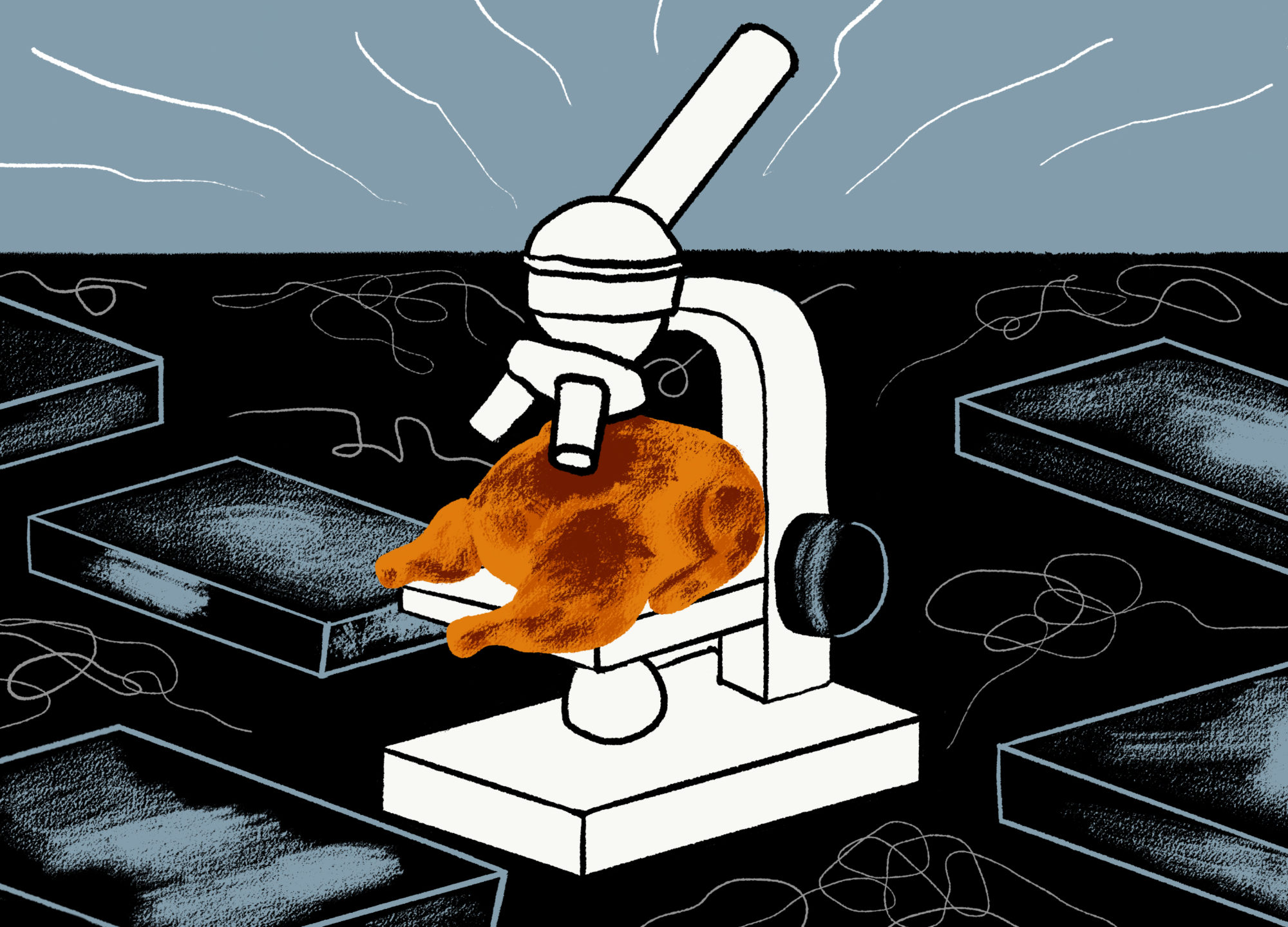 I hate roasting chicken. There, I said it.

Eating roasted chicken, however, I like. I like forking juicy breast and gnawing luscious thigh and taking big bites of just skin. I like exploring the carcass for surprises—the bits of crunchy cartilage, the sticky nubs at the bottom of the drumsticks, the parts with cute names like oyster and Pope’s nose. I like the smell of hot chicken fat, which is even better than that of the much-ballyhooed pork.

My problem is with roasting chicken, because it is supposed to be simple. It is supposed to be easy. It is not. If you’ve ever seen a chef, on TV or in person, roast a chicken, you’re familiar with the seeming effortlessness of this endeavor. In goes a bird and out comes a brown-skinned beauty that’s so juicy it seems impossible and so flavorful that you wonder whether it’s really chicken. When your only task is eating, you eagerly give in to the illusion. You might even imagine yourself, dry-browed and untroubled, serving such a chicken to friends, presenting it with oh-this-old-thing aplomb. But an illusion it is. “Roast chicken is a humble-brag of a dish,” says Charlotte Druckman, who has written cookbooks of her own and one with the chef Anita Lo. “People serve it, like ‘Who, me?’ when it’s actually up there with omelets as a litmus test of skill.”

This becomes clear when your job is to help the chef convert magic to instruction—a job I’ve held for the past 10 years. You have to ask questions. And the answers are horrifying. Under my infernal interrogation, the chefs confess. No, we don’t use regular old chickens; we source slow-growing birds from heritage breeds. No, we don’t just pop the brood in the oven; we hang them to dry in the walk-in for days and days before cooking. And that oven is not the same as your oven, unless you have one fueled by wood fire or a Combi, which lets you dial in both temperature and humidity. If your goal is to eat at a chef’s restaurant, this is all great news. If you’re trying to muster chicken-roasting confidence at home, it’s enough to make you order in. If you ask me—and if you also promise I won’t be fired from writing more cookbooks for chefs—you’re better off looking to another sort of food professional for advice on roasting chicken. I’m thinking of the test-kitchen operatives and freelance recipe developers who devise recipes meant for home cooks and often end up writing cookbooks of their own.

They call for regular ovens and standard-issue birds and roasting techniques that clock in somewhere between weeknight-easy and weekend-dinner-party doable. Yet while they aim for foolproof recipes, they have never met this fool.

Not to boast, but I have ruined many, many chickens. And even after a decade of roasting them, I am still a wreck from the jump. Often I’m so overwhelmed by the conflicting gospel that I just give up and make a sandwich. Should I listen to the wet briners or the dry briners, the spatchcockers or the splayers or the trussers? Should I heed the stuffers or the tuckers, the oil-rubbers, the butter-slatherers, or the aquaphobes, who insist you add nothing but salt? Or should I break with convention altogether and embrace the feta brines, koji marinades, and other hot new hacks churned out by the food-magazine industrial complex?

And that’s before cooking even begins. Should I cook on a rack, a bed of vegetables, or directly in a skillet? Should I roast high and end low, start low and end high, or roast high, low, or somewhere in the middle the whole time? Should I cook breast side up? Flip the chicken while it’s roasting? Roast the bird on its side? Perhaps endless options excite you, but they paralyze me.

“Roast chicken is a humble-brag of a dish. People serve it, like ‘Who, me?’ when it’s actually up there with omelets as a litmus test of skill.”

A significant subset of recipes seem devoted to one feature of the roast bird over all others—the fabled crispy skin. These all promise that if you take some steps that range from counterintuitive but straightforward to entirely logical and wildly inconvenient, you’ll feast on skin that’s the deep golden brown you see on magazine covers and in Instagram posts, the stuff that crackles beneath the teeth. I’ve tried many of the tricks. The spatchcockery. The sprinkling on of baking soda as well as salt. The high-heat roasting that saps the last traces of moisture from the breast and exhumes from the crannies of my oven the detritus of roast chickens past, filling my apartment with a blanket of alarm-blaring smoke. And the air-drying, which involves leaving your chicken to dry uncovered in your fridge for at least a day, risking both accidental salmonella contamination and the ire of your wife, who doesn’t want to come face to face with raw poultry every time she wants yogurt.

Still, I have not observed skin whose crispness survives the 15 minutes that the chicken is left to rest, let alone my clumsy carving. As I attempt to amputate legs and excise breast meat, I think about my more talented colleagues in cooking—the Samin Nosrats and Alison Romans and Melissa Clarks—and imagine them sitting down to flawlessly cooked, deftly dismantled roast chicken, clinking glasses and sharing stories than can barely be heard over the shattering crunch of each bite. Meanwhile, standing over the steaming mess in my kitchen, I glumly poke decidedly pliable skin with a finger and wonder what I did wrong.

Nothing, it turns out. Ask pitifully enough and your colleagues will commiserate with a dispirited cook. Yewande Komolafe, a skillful recipe developer and occasional supper-club host, will tell you that “crunchy chicken skin is a mythical thing.” The actual Samin Nosrat, author of Salt Fat Acid Heat, will concede that “by the time the chicken rests and you butcher it and pile it on a platter, because let’s be real, that’s how you’re serving it at home, you will have uncrisped the skin.” The real-life Alison Roman, author of Dining In, will deliver sweet affirmation: “It’s like we’ve been set up to fail.”

The more culinary therapy I sought out, the more encouraged I became. “All of these different techniques that everyone swears by are, in the end, just fiddling around with details and making improvements at the margins,” says Helen Rosner, a food correspondent for The New Yorker whose own technique ignited a brief, misogyny-tinged firestorm when she shared a snippet on Twitter. Her preferred method had me leaving my bird in my fridge overnight, enlisting a hair dryer to further exsiccate the skin, then fastidiously roasting, abandoning my newborn every 10 minutes in order to increase the oven temperature by 25 degrees. It also got me tantalizingly close to the chimerical skin with crunch.

When I spoke to Melissa Clark herself, author of Dinner: Changing the Game and The New York Times’s comprehensive guide to roasting chicken, she brought on the profundity with an observation so obvious and so true that it triggered the same sense of clarity I got when my therapist pointed out that ultimately my greatest fear is dying. “There are very few things you can do to make it not delicious, except overcook it,” she said.

Now, I love defined-down success as much as the next underachiever. Yet even this standard hinges on the single most difficult part about roasting chicken. As anyone with a healthy fear of killing his dinner guests understands, its fundamental challenge comes down to identifying when the hideous bacteria balloon you’ve put in your oven has transformed from deadly to delicious. Decent recipes do provide some guidance on doneness—you know, the typical “cook until the juices run clear” or “until a thermometer inserted into the thigh registers 160°F.” (When I ask chefs how they know that the bird they have just pulled from the oven is done, they prod the breast with a finger and say, “See?” No, I do not see.) Yet this all-important moment—when to yank the bird out of the blazing oven and the point at which all the effort you’ve expended so far proves either worthwhile or futile—gets so comparatively little attention that I often wonder if I’m the only one who spends the final 30 minutes stabbing my bird with a thermometer prong.

And I don’t know about you, but I don’t really understand where to stick the thermometer, and as my dad might say about his smartphone, I don’t trust it, either. When I’m ready to check the internal temperature of my chicken, I insert the thermometer into five different places in the thigh in search of the so-called thickest part and see five different readings. Then I end up cutting into the leg, my ineptitude laid bare for all my guests to see.

Occasionally, however, amidst the deluge of crisp-skin-promising, high-stakes recipes for roasting chicken, you come across some wise cook’s oh-by-the-way method for cooking at a low temperature for a long time. When I tried it, I knew: This is how busy, distracted, hapless, and/or anxious people should do it. It gives you tender, sticky skin—which it turns out I prefer to almost-crispy—and juicy, tender chicken. Best of all, it is actually foolproof.