Get a free recipe
Subscribe
Out of Retirement and Onto Your Sundae
By: Kristen Bieler Photos: Kylie Thompson 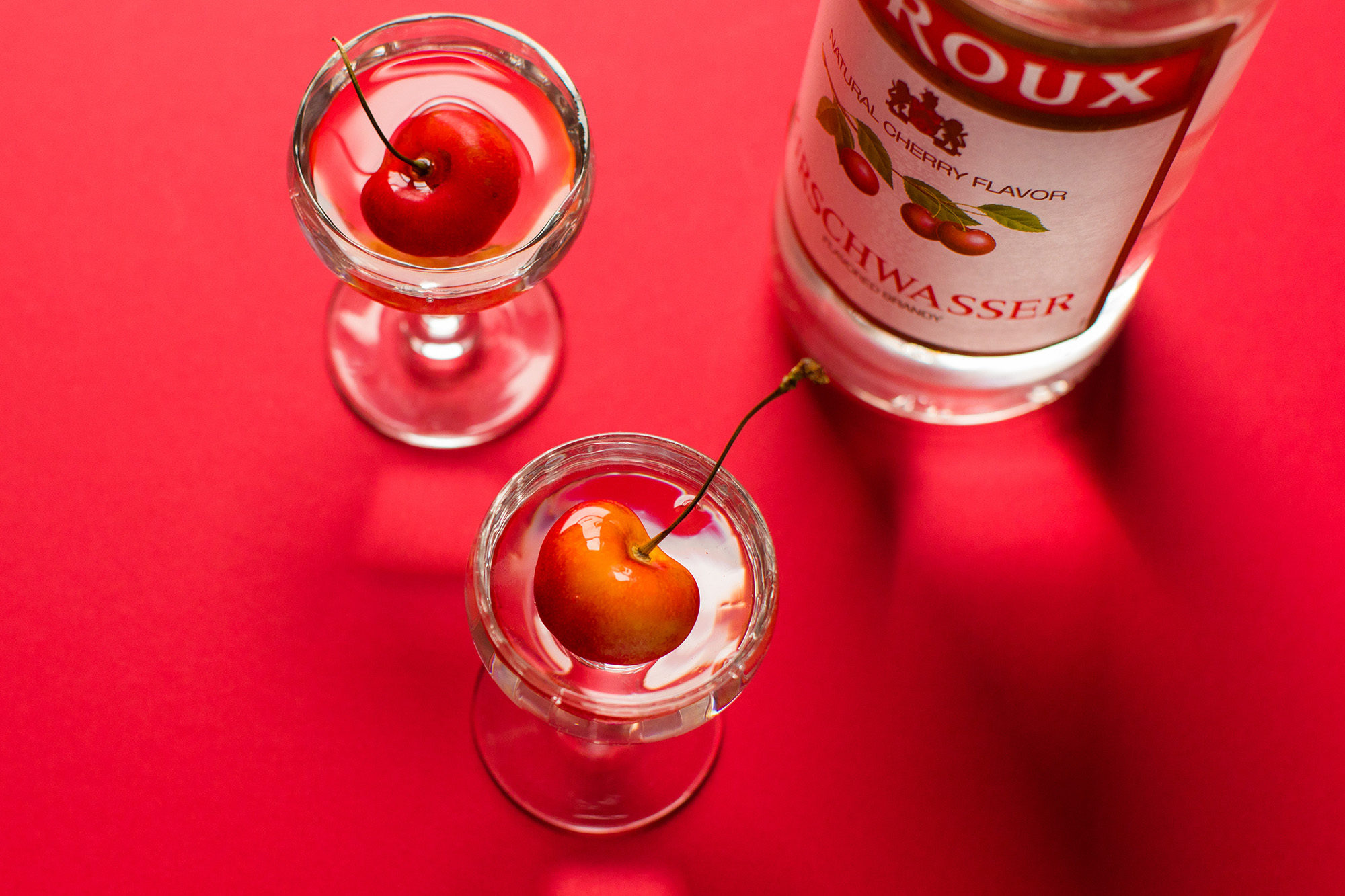 If you have a bottle of kirsch, it’s probably because you bought it a long time ago and used it once. But the clear, dry cherry brandy has unexplored potential in the kitchen.

Remember that bottle of kirsch you bought 15 years ago and haven’t used since? Maybe it was for a Black Forest cake you baked, or perhaps Swiss fondue—all you know is you haven’t seen its name mentioned in a recipe ever since. Like other one-hit-wonder ingredients (ground Iranian lime, anyone?), if you own a bottle of kirsch, it’s probably been enjoying a long, relaxing retirement with its contents mostly intact, minus one or two tablespoons.

That used to be my bottle. Until I discovered the food-enhancing versatility of this underutilized cherry brandy. Not to be confused with red, sugary cherry liqueur, kirsch is a clear, unsweetened fruit brandy also known as eau de vie (“water of life”) that has been made for centuries in Germany, Alsace, and Switzerland. To create it, producers crush perfectly ripe cherries, allow them to ferment, then distill the juice. It takes about 22 pounds of cherries to make one bottle of kirsch (which makes its typical $40 price tag seem like a bargain).

While most brandies, like Cognac and Armagnac, are aged for years in wood barrels, where they pick up a chestnut hue and flavors of vanilla and caramel, kirsch is bottled clear and unaged, which means it captures the unmasked essence of fresh cherries, underscored by a hint of bitter almond that comes from the cherry pits. It’s strong—most clock in at or above 80 proof—and is traditionally consumed as a postmeal digestif. Kirsch is delightful to sip, especially when it’s slightly chilled, but I’ve found its true potential is realized once it moves from the liquor cabinet to the kitchen. It’s traditionally cast alongside cherries, like in cherry clafoutis, or cherries jubilee—the flambéed British desert invented for Queen Victoria—where it acts as a cherry intensifier. But it boosts other flavors, too: Tossing a few teaspoons on fresh berries is like plugging in an amplifier. A small splash on a strawberry-rhubarb crisp before baking will accentuate its sweet baked-fruit character. Kirsch can often take the place of vanilla when baking and gives a subtly boozy, fruity punch-up to whipped cream.

It’s not just about the cherries. Alcohol enhances the flavor in food in two ways: Because it’s volatile—meaning it evaporates quickly—it carries food aromas to our nose more quickly. Second, alcohol can bond with both fat molecules (which our aroma receptors respond to) and water molecules (which our tongue detects), thus uniting smell and taste and essentially making our experience of food richer and more exciting. For less-than-perfect or underripe fruit, kirsch comes to the rescue, believes cookbook author David Lebovitz. Kirsch is also a standard ingredient in Lebovitz’s berry-based sorbets: “It brings the berry notes forward, which can sometimes get muted when frozen,” he says.

In savory dishes, kirsch adds a new dimension to cheesy dishes, like vegetable gratin and even macaroni and cheese. I’ve started adding a few tablespoons to chicken midroast, in place of white wine, which imparts complementary high-toned fruit notes. It’s become the secret ingredient in my braised brisket; kirsch’s brightness and acidity provide welcome contrast to the richness of the fatty meat. Jean Trimbach, whose family has been making kirsch at their Alsatian winery since the 1600s, swears by the addition of kirsch in choucroute, the region’s traditional pork and sauerkraut dish, both for the flavor and acidity it brings.

Adding too much, especially in an uncooked application, can distract from the dish, but there are times when more is more. Come cherry season, kirsch works double duty in my go-to dessert: a scoop of ice cream topped with kirsch-sprinkled cherries and drizzled with kirsch-spiked chocolate sauce. Packed with cherry-infused decadence and the faintest whiff of booze, it’s a hot fudge sundae reimagined, and I haven’t met a person of any age who can resist.

Kristen Bieler is a journalist and editor based in New York City. She is currently the senior editor of a wine and spirits trade publication, a regular contributor to Grape Collective and a judge of the Ultimate Wine Challenge international competition. Her writing on food and beverage has appeared in a range of print and online media for nearly two decades.