Get a free recipe
Subscribe
Rethinking Our Relationship With Cumin
By: Diana Kuan Illustration: Lauren Cierzan 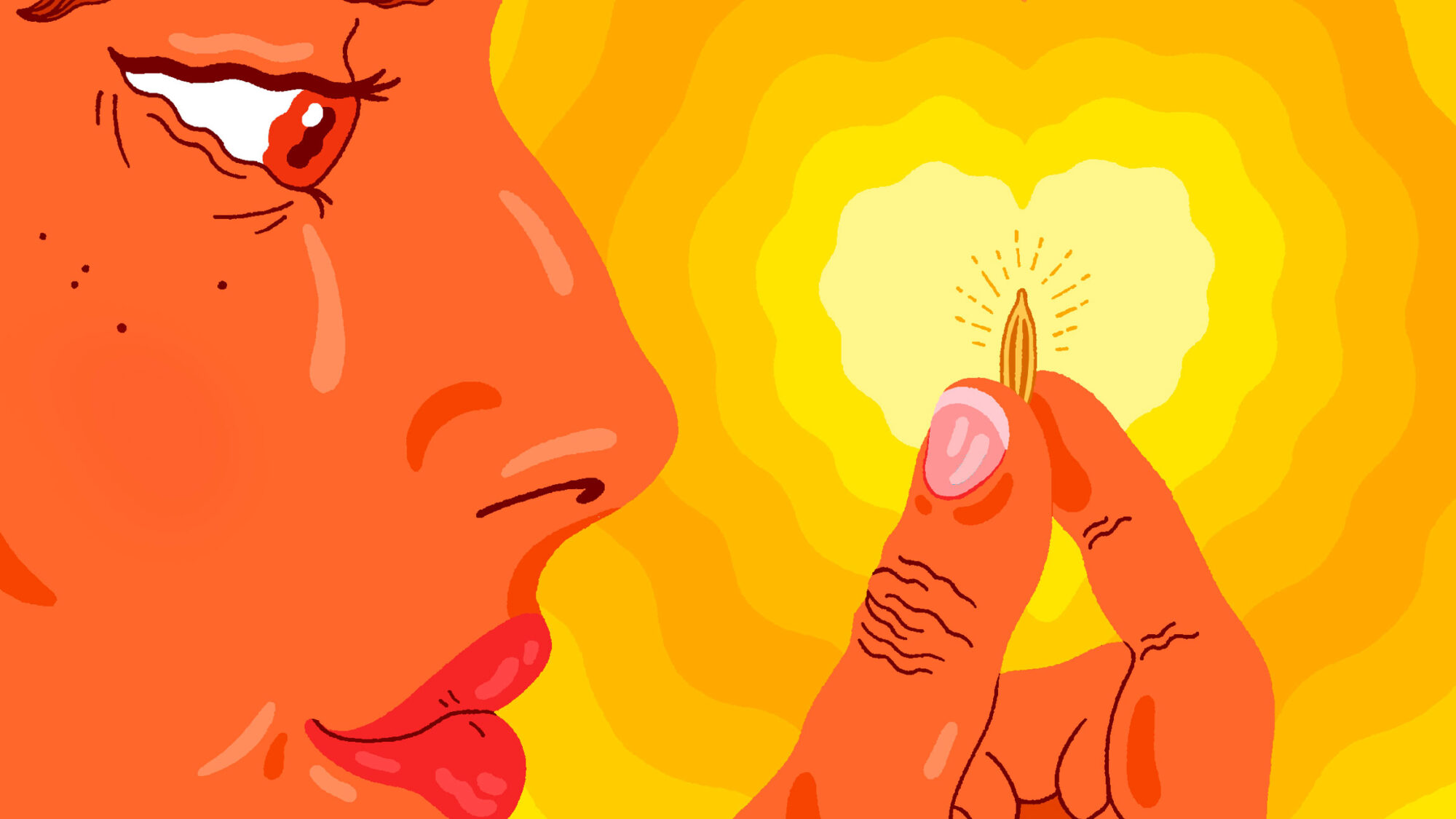 The smoky, musky spice is at home in everything from French chocolate mousse to skewers of Xinjiang lamb.

In my kitchen, I go through cumin faster than I go through salt. My love for this spice goes far beyond more conventional uses in chili, Indian food, Middle Eastern food, and Tex-Mex taco seasoning. I toss it in or on pretty much any savory dish I make at home that seeks a meaty or smoky oomph, along with a nutty and peppery finish. In stir-fries, it gives any sauce a musky complexity—as if ten different spices were used instead of one. In a marinade, cumin works exceptionally well when there is grilling or light charring involved—as with chicken wings or baby back ribs. In deviled eggs, cumin gives such a robust, grassy flourish to the mash that you might think you’re popping Manchego or Parmigiano-Reggiano into your mouth instead of egg yolk and mayonnaise. Cumin has a place in all of it.

Along the way, I also discovered that not only do roasted vegetables and salads get an extra layer of richness simply with the addition of a bit of cumin, but dishes that are traditionally made with meat (dan dan noodles or meatballs, for example) can be veganized and replicated with surprisingly close results with a meat substitute (such as tofu, seitan, or Beyond Meat) and a small amount of really good cumin.

To find out how cooks elsewhere use the spice, I wanted to dig a little deeper into three countries with cuisines Americans don’t normally associate with cumin: Greece, France, and China.

The ancient Greeks were clued in to cumin’s ability to enhance almost anything: They frequently kept some at the dining room table as a finishing seasoning to be used in the same way black pepper is today.

Despite the long history of cumin use in Greece, in the last century, there seems to have been a backlash against the heavy use of it in Greek cooking. According to Aglaia Kremezi, author of Mediterranean Vegetarian Feasts, Nikolaos Tselementes, Greece’s most influential chef, swayed home cooks with his early-20th-century magazine articles and cookbooks toward cooking in a more French style and away from using spices like cumin by encouraging a negative association between spices and the Ottoman occupation. He believed that Greek cooking had become too Easternized and tried to convince his fellow countrymen of the same. (Like many Greeks of his time, Tselementes had strong biases against the Ottomans because of a long, dark history between the two regions.)

Thankfully, this anti-cumin stance didn’t stick. Today in Greece, there is a renewed interest in cooking with cumin and other traditional spices. Cumin can be found in all the expected meatballs, sausages, and kebabs, but also in many forms of Greek vegetarian cooking, including phyllo pies with wild greens or eggplant and leek, and various bulgur and rice mixes—where cumin dissolves into a nutty and gamy coating for vegetables and grains. I tested a roasted carrot with garlic and cumin recipe that Kremezi sent me that is so flavor-rich I resolved to try roasting my sweet potatoes, turnips, and other root vegetables with this spice combination.

The ancient Greeks were clued in to cumin’s ability to enhance almost anything: They frequently kept some at the dining room table as a finishing seasoning to be used in the same way black pepper is today.

As in Greece, cumin has a long and complex history in France, used since medieval times. “It is a versatile classic used widely in France for cooking vegetables, meats, and fish, and it’s also used to flavor breads and cheeses, such as Munster from Alsace,” says Clotilde Dusoulier, author of Tasting Paris. Contrary to everything I learned in culinary school about French cooking relying on limited use of spices, Dusoulier loves using cumin on roasted vegetables (“especially cauliflower, potatoes, or winter squash”), baking it into gougères or a zucchini and apricot socca tart, and making it a star ingredient in quiches.

Cumin is just as revered in today’s French restaurant world. Michelin-starred chefs, including Alain Ducasse, Hélène Darroze, and Guy Savoy, have incorporated cumin into everything from duck confit to chicken liver. Darroze has even flavored chocolate mousse and other chocolate desserts with cumin, and renowned pastry chef Pierre Hermé managed to work cumin into a tart with peaches and rose petals. The late Michelin-starred chef Joël Robuchon once said, “One should eat cumin every day.” At his namesake atelier restaurants around the world, cumin graces a multitude of roasted carrots, carrot soups, carrot mousses, and other vegetable preparations—but carrot is the real sidekick.

In China, where cumin entered through the Silk Road, it’s rarely used in Cantonese, Sichuan, or Shanghainese cooking, the regions with cuisines most familiar to American audiences. In northern and western Chinese cooking, however, it’s a completely different story. According to Kian Lam Kho, author of Phoenix Claws and Jade Trees, Xinjiang—located in China’s far west—is the region that uses cumin most extensively. “It has a huge Muslim population that consumes a lot of lamb, and lamb is very closely associated with cumin,” he says. From Xinjiang province, cumin spread to other western, northern, and northeastern regions. Gansu, Ningxia, Shaanxi, and Shanxi in the west, as well as Beijing, Inner Mongolia, and Dongbei in the north, have cumin as a staple in their regional cuisines.

The late Michelin-starred chef Joël Robuchon once said, “One should eat cumin every day.”

When I lived in Beijing a decade ago, one of the foods I ate on an almost daily basis was a popular street snack called rou jia mo. Like a burger but intensely flavored, it consists of thinly sliced or chopped meat and onions cooked with a heady spice blend of cumin, anise, fennel, and other spices, all stuffed in a pita-like pocket. In Shaanxi province in the northwest, where rou jia mo is thought to have originated, the heavily Muslim population prefers using beef or lamb. In the other parts of China that have adopted rou jia mo as a favorite street food, including Beijing, pork is most common. I remember vendors using so much cumin that you could smell the grilled meat from a block away, especially in the Beijing winters, with their fierce winds. These Chinese pita pockets were my first introduction to how intoxicating the scent and flavor of cumin can be.

Another street food to which cumin is liberally applied is shaokao, a Chinese-style barbecue usually served as street food. Spice mixes vary from region to region around China, following where Chinese Muslims have settled, but almost all involve cumin. Even in Yunnan province, a southern tropical-climate region where cumin is not heavily used except on meat and vegetable skewers, the popular Kunming-style shaokao relies on cumin along with Chinese 13-spice powder, black cardamom, and Sichuan pepper, according to Georgia Freedman, author of Cooking South of the Clouds.

In Yunnan—located in the south, bordering Myanmar, Laos, and Thailand—not only are meat and vegetable skewers laced with the aromatic cumin spice mixture, but so are deep-fried lotus root stuffed with sticky rice, a Yunnan-only specialty. Freedman credits a younger generation of Tibetans who have moved to Yunnan from Tibet, and also travel back and forth to India for work, for the new uses of cumin there these days. “It’s a part of China that has a mashing together of flavors,” she says.

So maybe it’s time to rethink the cumin in your kitchen cabinet. Instead of regulating it to specific cuisines, try using it as liberally as you would salt and pepper. You don’t have to go as far as flavoring chocolate mousse or a peach tart with it, but after some experiments with savory dishes, you may find yourself wondering, “What can I add cumin to next?”

Diana Kuan is a food writer and photographer based in Brooklyn. She is the author of Red Hot Kitchen, on cooking with Asian hot sauces, and The Chinese Takeout Cookbook, on Chinese food and culture in America. Her work has also appeared in Food & Wine, Time Out New York, and The Boston Globe, among other publications. In addition to writing and photography, Diana has taught cooking classes for the past 10 years in both Beijing and New York. Her favorite foods are dumplings, ramen, and tacos, usually with hot sauce on the side.