Get a free recipe
Subscribe
A Restaurant Job That Comes With an Education
By: Andrew Cotto Photos: Giada Randaccio Skouras Sweeny 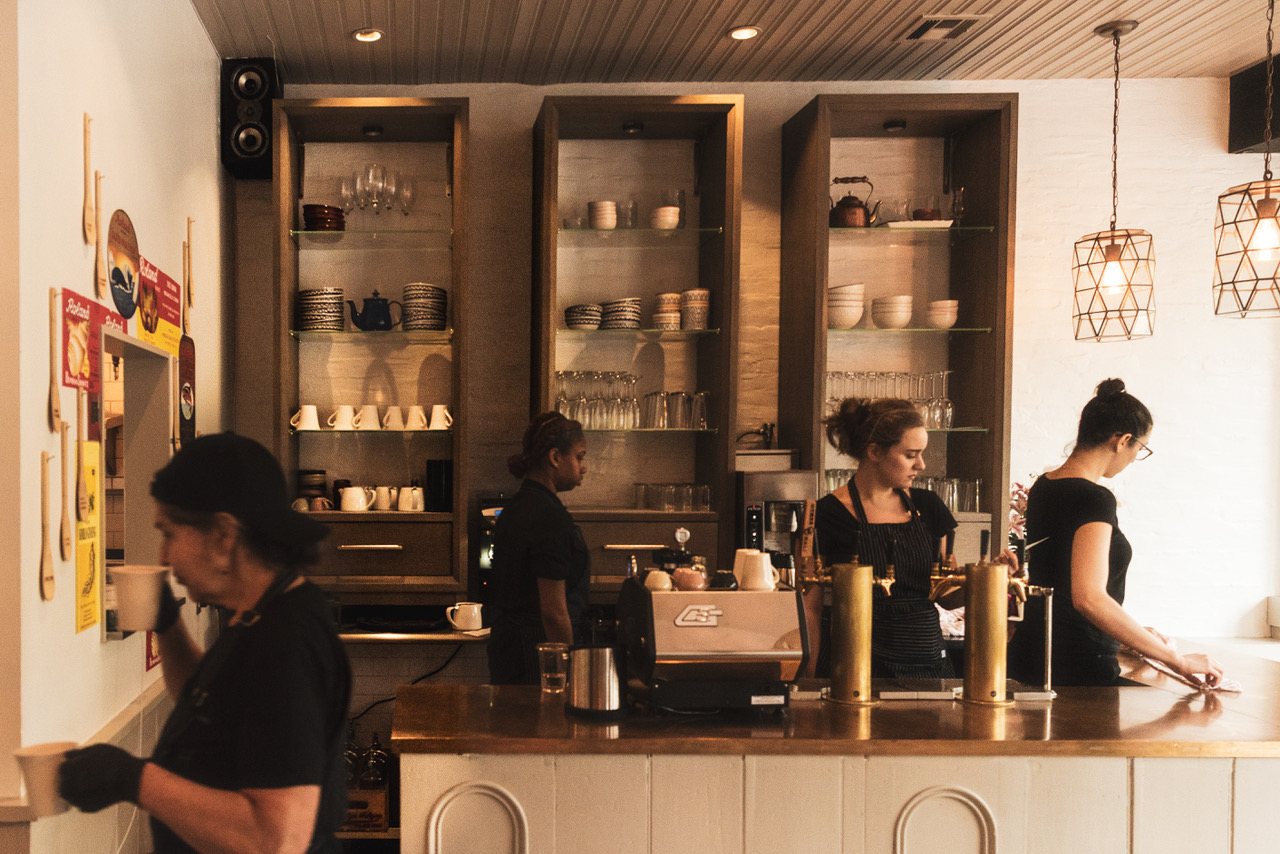 Emma’s Torch, a new restaurant and culinary training center in the Carroll Gardens neighborhood of Brooklyn, is named in honor of Emma Lazarus, the 19th-century American poet whose words are etched into the Statue of Liberty: “Give me your tired, your poor, your huddled masses yearning to breathe free.”

For many, these are just words. To 27 year-old Kerry Brodie, they were a calling to lift a torch of her own by empowering refugees and victims of human trafficking through culinary education. The effort is the merging of Brodie’s passion for humanitarian work and her love of food; the result is an innovative restaurant offering dinner, brunch and much humanity in a prominent corner storefront of brownstone Brooklyn. With a bachelor’s degree from Princeton in near Eastern studies and a master’s in government from Johns Hopkins, Brodie thought she had her dream career as an employee for the Israeli embassy, and later the Human Rights Campaign—where she had personal contact with many asylum seekers from parts of the world eager for opportunity in America. And thus, the idea was born to use food as a venue for social change.

“I’d become aware through the news and general knowledge of the food industry that there was this complaint from chefs about a lack of trained staff,” Brodie says. “And there were these amazing people coming over who bring with them those spices, those flavors, those things that have always made our culinary culture, so why hasn’t someone done this?”

The rhetorical question was left unanswered until her husband nudged and cajoled her into action. She incorporated the organization, quit her job, and enrolled in the Institute of Culinary Education in lower Manhattan. In the new restaurant space, two cohorts of four, separately, go through an eight-week program. These are well-paid internships ($15 an hour) that focus for four weeks on technique and prep, and then four weeks on real-time cooking in a restaurant kitchen for sophisticated Brooklyn eaters.

The respective cohorts work in tandem to prepare and present meals the restaurant will serve, so the training is not just practice. The junior cohort, which reports each morning, gain expertise in technique and preparation by carefully following recipes for menu items that will be cooked that evening by members of the senior cohort, who arrive later in the afternoon. All of this, both downstairs in the prep area and upstairs in the open kitchen adjacent to the dining area, is supervised by a patient and indefatigable chef Harris, who does not have the luxury of teaching four students one dish at a time; he has to have them all working individually on separate items in order to meet the restaurant’s demands.

The current kitchen team consists of four interns from four different countries (Pakistan, Russia, Venezuela, and Syria) of diverse age and gender; and like it was for those before them, the training is rigorous and demanding (show up late…go home for the day). Interns are evaluated weekly. There are quizzes. Those in need of ESL assistance have the option of working with certified instructors as part of the internship. A passion for food is a prerequisite for acceptance, and the training is intentionally formal. The interns are there to learn classic techniques and best practices that will allow for them to acquire and maintain gainful employment and, as a result, a sustainable existence in America. Brodie explains the pedagogy of Emma’s Torch: “Our employment partners are not necessarily looking for someone who can do a perfect medium dice. They want someone who will show up on time, work hard, and know the dance in the kitchen, and that’s something we can really instill in eight weeks and expose them to all the things that the culinary industry has to offer.”

That said, the accepted interns do come from cooking backgrounds and cultures immersed in cuisine, so they bring with them knowledge of indigenous ingredients and traditional dishes that are very much recognized in the training and formulation of the menu.

Mazen, from Syria, owned a small restaurant in his hometown, which he abandoned to seek refuge in America. He bounced around some Middle Eastern kitchens in New York until his sister secretly applied to the Emma’s Torch program on his behalf and presented his acceptance as a surprise birthday gift, an act of kindness that changed his life. “I love it,” Mazen says. “Every day I’m learning something new.”

An insurance broker in her native Venezuela, Magedda worked often with pastry as a hobby and was especially renowned for her homemade arepas. In America, with very limited English, she decided to pursue her passion for food and was connected via RIF (Refugees and Immigrant Fund) to Emma’s Torch, where she had to adapt to challenges to her personal independence and vegan practices. “I don’t like to follow instructions, so this is very difficult for me,” she says with a contrite smile. “I also now have to work with meat and chicken and fish, but I do it because I am so happy here. I am very grateful for this opportunity.” Chef Harris—whom Brodie calls an “amazing educator”—researched culinary cultures from around the world, especially those with displaced populations that might arrive on American shores, and he created an instructional menu of New American cuisine informed by flavor profiles from such regions, in conjunction with gourmet American standards. This is reflectied in a menu that includes black-eyed pea hummus, tamarind barbecue wings, shawarma spiced lamb shank, grilled branzino over Spanish pepper stew, and pistachio bread pudding. The menu (and its expert preparation) is a metaphor for the power of food as a unifying force.

And the force of Emma’s Torch and its ethos is widely recognized and supported by inhabitants of the neighborhood, borough, and city (who have expressed support and filled the tables since opening), as well as many dignitaries from the food community: Rachael Ray donated the interior furnishings and the talents of her designer, who created an airy and elegant space within the corner storefront fronted and flanked by massive windows; Roland Foods offered ingredients and mentoring; knives were gifted to the interns by Korin; Emeril Lagasse kicked in the shoes.

Brodie says their interns graduate with professional-grade chef knives and chef shoes. “They are as ready to go as your average culinary school graduate, except they have actual experience,” she says.

Students’ last names have been omitted to protect their privacy.

Andrew Cotto is the award-winning author of The Domino Effect and Outerborough Blues: A Brooklyn Mystery. His third novel, Cucina Tipica: An Italian Adventure, will be published in October 2018. Andrew has written for many publications, including The New York Times, Men's Journal, The Huffington Post, and Conde Nast Traveler. He lives in Brooklyn, New York.