Get a free recipe
Subscribe
The Republic of Georgia Has a Family of Cheesy Breads
By: Linda Schneider 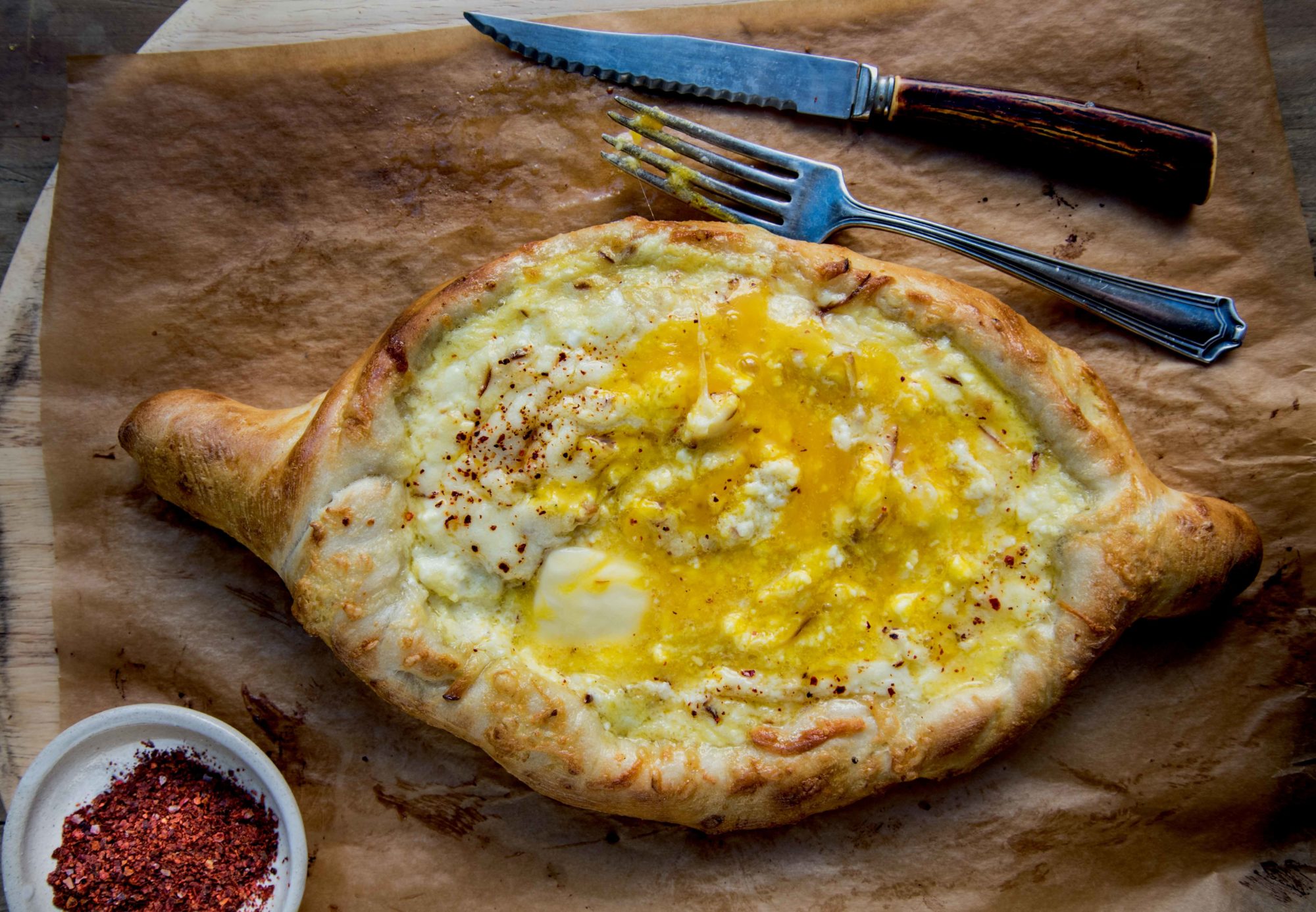 If you can roll out pizza dough, you can make khachapuri—Georgia’s famous cheese- and egg-filled bread canoes.

Look on a map, and you’ll find Georgia nestled between Russia to the northeast, Azerbaijan to the southeast, Armenia and Turkey to the south, and the Black Sea to the west. Georgia’s cuisine is influenced by all of these neighbors—from its khinkali (soup dumplings filled with ground meat and herbs) to narsharab (deep-red pomegranate sauce) to badrijani nigvzit (fried eggplant with walnut sauce). But it’s a whole family of cheese-filled breads, known as khachapuri, that really stands out. (“Khacha” means cheese curds and “puri” means bread. And now you know a little Georgian.)

There are probably more regional types of khachapuri than there are Americans who can locate Georgia on a map. Think flaky pastry and yeast-raised crusts. Imeretian is a circular, cheese-filled bread from the west-central region of Imereti. Khabizgina adds boiled potatoes to the mix. Achma, from the Abkhazian region, involves multiple layers of dough, resembling a cheesy white lasagna.

One of the most famous Georgian breads internationally is adjaruli (or acharuli), a yeasted dough formed into a canoe shape, edges folded over and filled with a combination of creamy, fresh, and sharply aged cheeses, served hot with a raw egg that cooks before your eyes in the molten cheese and a pat of butter in the middle that melts into this mixture.

In Georgia, acharuli khachapuri is filled with sulguni, a salty and sour cow’s milk cheese that is good for melting, and imeruli, a fresh salted cow’s milk cheese that’s crumbly and also melts well. If you’re trying to re-create the tastes and textures of these in an American kitchen, you can try substituting with a combination of feta cheese (to impart those sour notes) and mozzarella (for its good melting properties). I’ve made a version with feta and taleggio that was over the top.

Curious about the flavor and consistency of sulgini and imeruli cheese, I recently made it my mission to track some down in Northeast Philadelphia, which is home to a large Eastern European population. I found several domestic versions of sulguni and imeruli, produced and packaged in Brooklyn, and a few imports, including a smoked version of sulguni.

Making acharuli khachapuri at home starts out in a similar fashion to rolling out pizza dough. You roll out the dough, layer on the cheese topping, and then, to form the iconic shape, you give the ends a roll, twist, and pinch to seal. Add a bit more cheese (because more cheese is of course always better) before sliding it into a hot oven. Once it comes out bubbling hot, top your canoe with a cracked egg and a pat of butter.

Acharuli khachapuri is best enjoyed straight from the oven when the cheese is at its meltiest. The egg, cheese, and butter are then stirred together with your fork to form a decidedly rich, decadent, and delicious combination. To eat, just tear off a piece of bread, scoop up some cheese and egg mixture, and enjoy.