I have some of the most beautiful produce in the world readily accessible in my backyard, but when I got a hankering to make my own brazo gitano, I didn’t have easy access to local guava. Remembering that the Brazo Gitano Franco bakery in Mayagüez has a cherry-filled cake, I figured the next best thing to guava was local cherries. That’s how I stumbled on a cherry orchard in Stockton, California. Little did I know what a great story it had.

Jontue and Oscar Grado are the two young farmers who own Burge Road Farm. They are the epitome of Stockton’s agricultural history. Jontue descends from Filipino ancestors; Oscar, who is Mexican and Puerto Rican, is a U.S. Army veteran. Filipinos and Mexicans were the main farm labor force in Stockton from as early as the 1930s through the 1960s, and eventually joined forces in the 1960s during the Delano Grape Strike, fighting together for farmworkers’ rights. This was the social justice action that brought the most attention to the United Farm Workers movement, led by Cesar Chavez and Larry Itliong.

The Grados bought the cherry and walnut orchard in 2014, mostly so their family could live a quieter way of life. It might have been a quieter lifestyle, but it definitely wasn’t an easier one. “He grew up having fond memories of climbing and picking fruit trees at his grandpa Tom’s house and tagging along with his family when they did seasonal jobs picking produce in the fields of Stockton,” Jontue told me about Oscar. And because Oscar already had some experience with trees—his father has owned a tree service company in Stockton for thirty years—running the farm seemed like a no-brainer.

The two took notice that family and friends loved coming into the orchard and picking fruit from the trees. In 2015, the Grados decided to open their farm to the public for U-pick during the early-summer peak cherry season. They were surprised by the overwhelming response of patrons who wanted to pick their own. The U-pick concept seemed perfect, especially since they considered themselves too small to compete with the surrounding cherry producers. And they loved the idea of sharing their farm with families who wanted to get closer to the earth, be in the sunshine, and have fun picking directly from the trees.

On the day that Mami and I visited Burge Road Farm, we drove down a narrow strip of asphalt that cut a makeshift road through old walnut, almond, and cherry trees. The friction between the tires of the car and the ancient earth created trails of airborne dust and left a storm behind us. Once in the orchard, we zigzagged from tree to tree, searching through the bright green leaves for the cherries; some were fire-engine red and others the color of Cabernet Sauvignon. Although it had rained furiously just two weeks before, giving some of the fruit fatal cracks at their seams, it was one of those typical sweltering summer days in the Central Valley. Our hard work as U-pickers paid off. Those were some of the best cherries that we’d had in a very long time. After a while, we didn’t notice the heat as we sat under trees at the far end of the orchard. I sat on the ground; my bare feet exposed. Shade was plentiful, and the breeze swept right over us as we ate our sun-warmed fruit. I found it magical; so much so that I had tricked myself into picking five pounds of cherries in no time. Being able to consume only so many fresh cherries, I decided that making jam would be a good way to preserve their beautiful flavor—a jam that would be perfect for my own brazo gitano filling later in the year when there would be no fresh cherries. Puerto Rico meets Northern California. 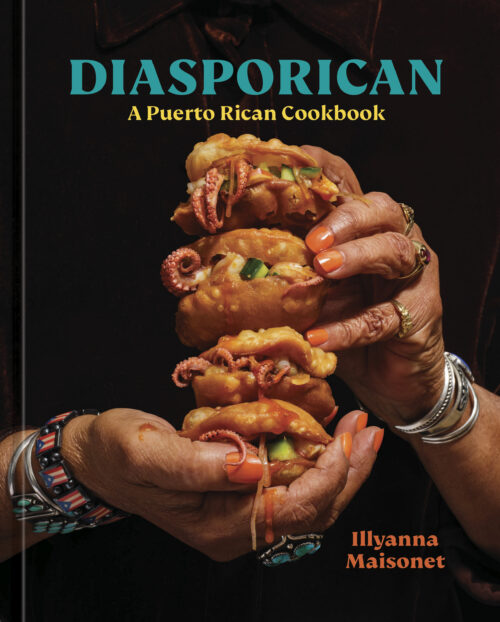 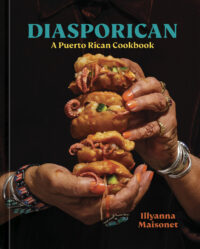