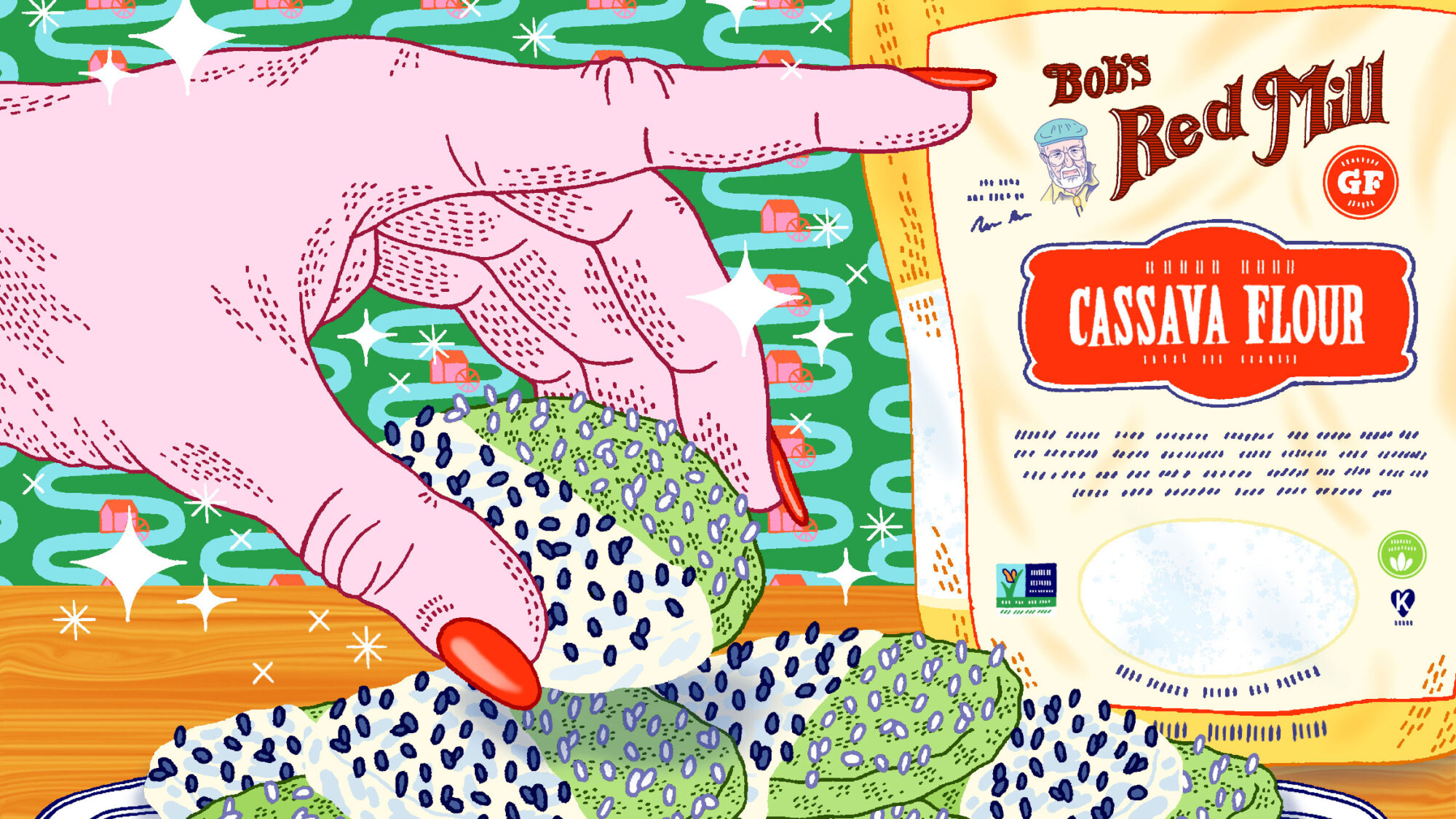 If you’ve ever cooked a recipe from the back of one of the company’s 400+ products, you have one very busy pastry chef to thank.

Somehow, over the course of the last few years, without my noticing it happening, I started worshipping at the altar of Bob’s Red Mill. A recent scan of my kitchen revealed just shy of a dozen zipper-topped plastic bags filled with the starchy sundries made by the Oregon-based natural-foods company. I have packages of whole wheat and almond flour, cornmeal (both finely ground and polenta), kasha, rolled oats, red lentils, chia seeds, nutritional yeast, potato starch, and maple sea salt granola. No other brand occupies even half as much real estate in my pantry. And yet it only represents a fraction of the company’s staggering lineup of 400-plus products.

On the back of each of these packages that fill my home, whether it’s black turtle beans or pea protein powder, is a recipe, and sometimes two or three, printed in tiny font. Many are straightforward—instructions for basic pasta dough on the semolina bag, for instance, or a loaf of rye bread on the rye flour. When I need a reminder of the ideal water-to-grain ratio for polenta, Bob has my back. Other recipes provide cultural context for ingredients that may be less familiar to the mainstream American palate. The recipe on the back of a 28-ounce package of adzuki beans, for example, highlights a red bean cake traditionally served for Chinese New Year. The teff flour includes a recipe for overnight Ethiopian injera.

It’s easy to take each unassuming recipe for granted. After all, food companies from Goya Foods to Earth Balance have, for decades, produced recipes to accompany their products. And some of these brand-driven dishes, like Chex Muddy Buddies and Kellogg’s Rice Krispies Treats, have long since transcended their corporate origins and become part of the canon of American cooking.

But start adding things up, and you’re talking about a whole lot of recipes on Bob’s packages—several cookbooks’ worth, at least. And then there’s the company website, which provides a lifetime’s worth of encyclopedic grain knowledge. There, you’ll find Georgian khachapuri (made with Bob’s yeast and all-purpose flour) and Brazilian pão de queijo (tapioca flour). Hiding behind the quaint, old-timey veneer of the company’s branding, there’s sesame matcha shortbread, orange cardamom brioche, freekeh pilaf with apricots and almonds, and quinoa sliders. And there are gluten-free takes on just about every classic baked good, from English muffins to cinnamon rolls. (The site’s gluten-free pumpkin bread, which I found by chance in a Google search last year, has since become my go-to).

It turns out that the yeoman’s work of developing and testing all of these recipes falls not to a 12-person corporate test kitchen that you might envision, but rather to one woman, Sarah House. The 39-year-old CIA-trained pastry chef became the team’s first “food innovation chef” in 2012. Today, she heads up the test kitchen at Bob’s Red Mill’s headquarters in Milwaukie, Oregon. Before House was hired, recipe development for the company was scattered and ad hoc. Her hire marked an important transition for the company. They were growing fast and recognized the need for sound, reliable product recipes to build trust with customers.

House and her team (she works with one other person in-house and a few social media editors who occasionally develop or outsource recipes) are responsible for every recipe that graces both package and website—including updating antiquated recipes that taste like something out of an early-edition Moosewood Cookbook. “Some of our older muffin recipes can be a bit bran or germ heavy,” House says, noting that contemporary tastes tend to shy away from both. So over the past two years, along with a package redesign, House says, “We worked our way through the entire recipe catalog to give things a nice refresh.”

This recipe catalog goes back to 1978, when the company was founded by an actual Bob—the now 91-year-old Bob Moore, whose face (bespectacled and kind) appears on every package. Back in the 1960s, Moore’s wife, Charlee, turned their family on to the era’s natural-foods revival. Around the same time, Moore happened upon the book John Goffe’s Mill at the library—a 1948 autobiography about an academic turned gristmill operator. He was inspired. “I had always dreamed of starting my own business,” Moore says. He began researching mills and acquiring giant 19th-century millstones with the zeal of someone in slightly over his head. “That ultimately led to the international operation you see today,” he says.

Thanks to the ever-expanding inventory of products, House sometimes finds herself working with an ingredient that she didn’t encounter in culinary school.

Today, Moore—who begins each day with flaxseed-topped oatmeal before heading to company headquarters—sits at the helm of a multi-million-per-year employee-owned business. But the company, and its ethos, has managed to change with the tides, from the 10-grain breads of the ’80s to the paleo rush of today. Bob’s Red Mill currently offers more than 100 certified gluten-free products, including flours made from almonds, cassava, coconut, quinoa, and hazelnuts. And the company’s “grains of discovery” line has helped introduce lesser-known products, like kamut berries, amaranth, sorghum, and cracked freekeh, to a mainstream market.

Thanks to the ever-expanding inventory of products, House sometimes finds herself working with an ingredient that she didn’t encounter in culinary school. Starchy cassava root was a recent example. “With cassava, we did a lot of research on Brazilian cuisine and grain-free baking sites,” she said. “And then there was lots of testing to get to know the ingredient: the flavor, how it absorbs liquid, how it interacts with sweeteners and eggs.” Every recipe is tested at least two times—and often more—before getting the greenlight for package or website publication.

When it comes to staying current, the company relies heavily on communication with the people actually cooking with their products. “Our customer service team talks to folks on the phone all day, answers email, and interacts on social media,” says Dennis Vaughn, who became CEO of Bob’s Red Mill in 2018. (Moore retains the title of founder and president.) “They are one of the best resources for us when we’re looking for new ideas—what are they asking for, what problems or frustrations are they experiencing around food, and how could we help them solve it?”

The test kitchen, which was first built in 2012 and expanded in 2015, is a natural extension of this customer-company collaboration. “Bob wanted the new kitchen to be a showpiece, and if he has a special guest visiting, he always brings them by,” House says of the renovation, which brought more spacious digs but also state-of-the-art appliances (a Vitamix, multiple Zojirushi bread machines, two KitchenAid stand mixers, and two refrigerators—gluten and gluten-free) as well as a four-foot-square granite slab for working doughs. Still, House says, it more closely resembles a home kitchen than a culinary laboratory. “Our main consumers are home cooks and bakers, so we keep things true to their experience.”

Just as in any home kitchen, things don’t always go seamlessly. “I have been working on a grain-free, yeasted sandwich bread, and I still haven’t found one I’m satisfied with,” House says. But, as if taking a cue from Moore’s playbook, she adds, “It’s just about practice and research. We will get there.”