Get a free recipe
Subscribe
The Reassuring Subtlety of the Steamed Rice Roll
By: Tatiana Bautista 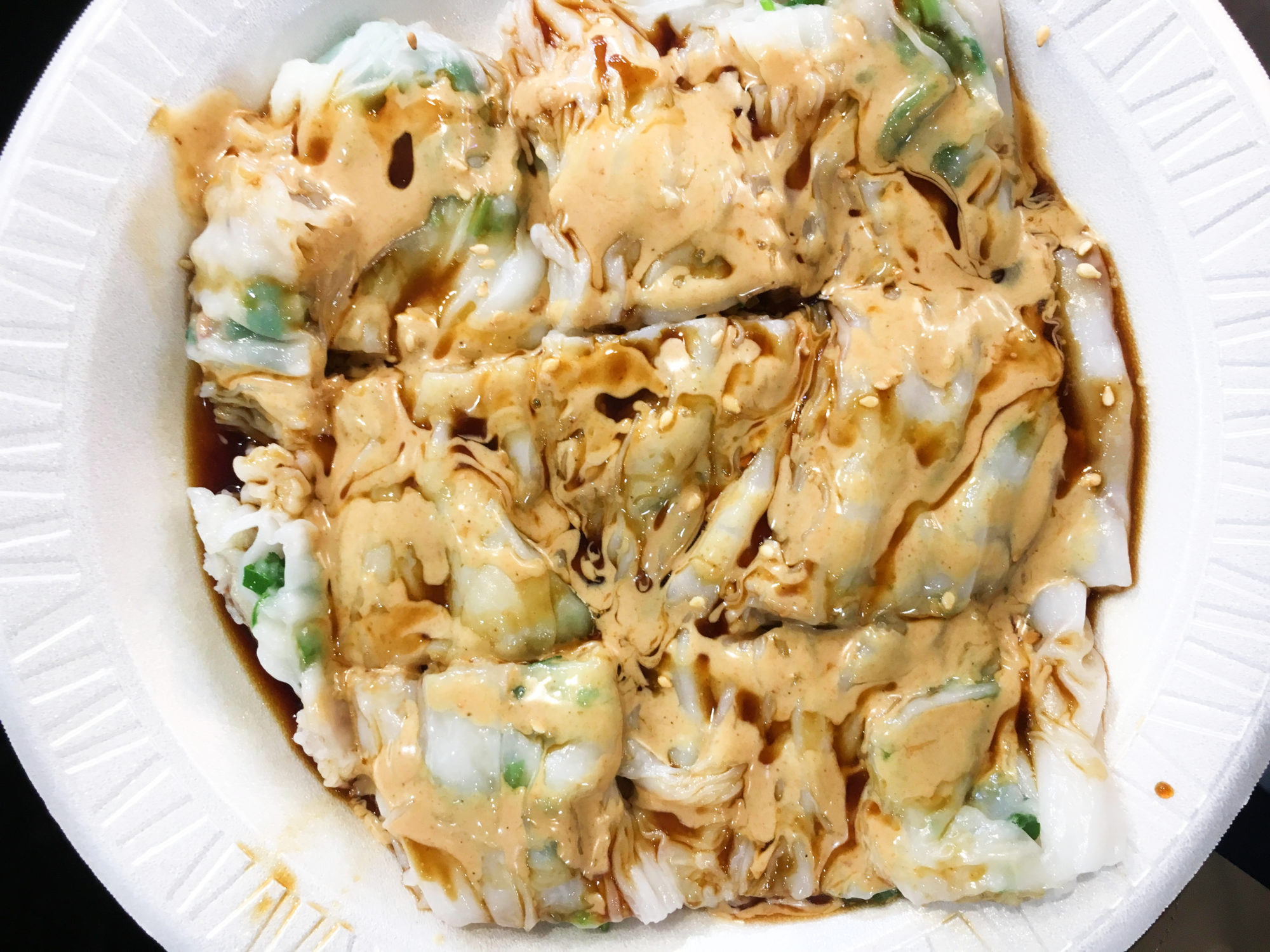 Cheung fun, a Cantonese steamed rice roll, is a beloved dim sum dish and street snack that can sometimes fall flat. But a mini mall counter in Flushing is doing it justice.

Steamed rice rolls are like pizza dough. Too often, they’re written off as being secondary to their toppings, but when they’re made skillfully, they become finely textured canvases that are transformed by everything that soaks into them and sits on top of them. When they’re fresh, the translucent rice sheets have a silky, delicate texture that fits snugly around steamed shrimp and gently soaks up pools of salty dark sauce.

Known as cheung fun in Cantonese, these rice rolls represent an entire subset of dim sum on their own. At their simplest, they’re rolled into loose scrolls and served in a pool of signature sauce—usually a mixture of soy sauce, oyster sauce, and sugar. There’s obvious umami and brash saltiness from the sauce that permeates the cheung fun like a sponge. Other variations are stuffed with shrimp (ha cheung) or fried dough (ja leung) or studded with scallion bits and dried shrimp (ha mai cheung) or covered in a sweet-savory layer of sesame paste and soy sauce. But not all cheung fun are created equal. If ja leung sit out too long—which is often the case when dim sum carts are pushed from table to table—their crunchy, fried, doughy insides get soggy and unpleasantly taste like a mouthful of oil at room temperature. Plus, the widespread use of premade rice rolls—although both common and convenient—just can’t compare to the freshly made kind. They’re thicker and often too chewy, since they come precooked and vacuum-sealed in large sheets. But at Joe’s Steam Rice Roll in Flushing, cheung fun are given the proper treatment, steamed through perfectly and evenly so that they have a touch of elasticity and softness without being soggy.

With a steaming machine imported from Guangzhou specifically used to make cheung fun, owner Joe Rong makes each dish to order, so texture is never compromised. And similar to street vendors throughout Guangdong province, you get to choose what goes inside, like ground pork, barbecue beef, or dried shrimp, and extras that get mixed into the slurry of rice flour batter, including a cracked egg, corn, cilantro, and scallion.

In a mini mall filled with tiny shops selling knickknacks and women’s clothing, you’d hardly expect to find a food stall that draws lines on the regular. The setup at Joe’s is straightforward: Order at the counter, then take a seat at the bar. You’re not here to linger and chat, but to (very quickly) enjoy your cheung fun. But while you’re perched at the bar, you get to oversee the spectacle that goes into creating each one of these gleaming crepes. A rice stone mill turns out a stark-white opaque batter that looks like you could use it to paint a house. This and the large steamer take up a majority of the food stall’s space.

The cheung fun batter is spread thinly across a large stainless steel drawer, then sprinkled with your preferred permutation of ingredients (mine being ground beef, scallion, egg, and cilantro) then placed inside the commercial steamer. Rong’s steamer has two drawers, where he’s constantly going back and forth to either start a new order or scoop up a finished one. After what feels like hardly two minutes, the slurry turns into an elastic, noodle-like texture and gets scraped up with plastic spatulas to form one large, loosely packed roll, only to get chopped up into smaller, more manageable bites.

The cheung fun glistens on a dull styrofoam plate, and the signature sauce finds its place in every nook and cranny of the wrinkles created by steaming. Part of me wishes that all cheung fun served at dim sum were made with this much care, but it also makes me appreciate Joe’s that much more.