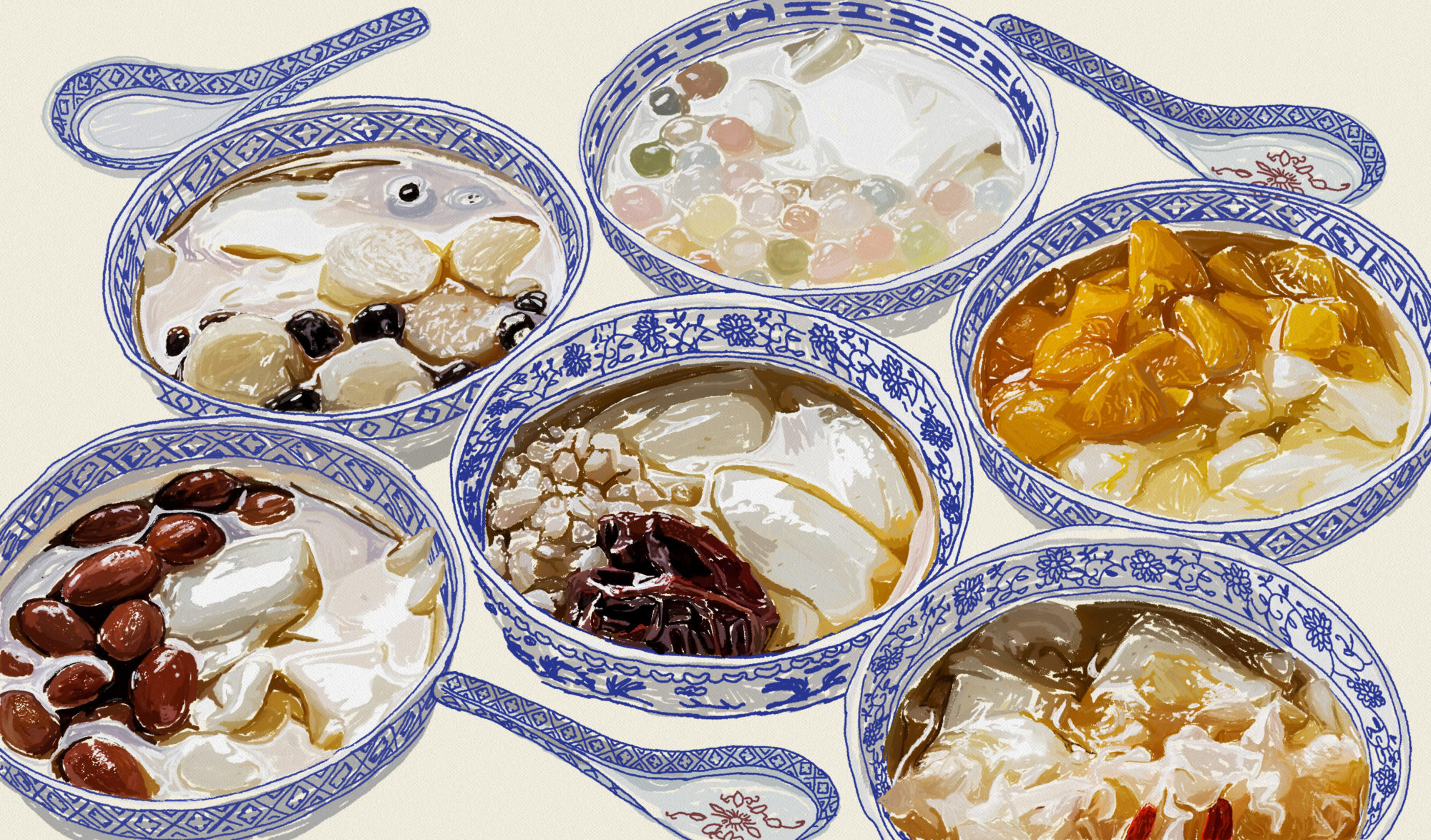 The great bean curd is like a chameleon, adapting to whatever environment it’s thrown into. Its neutral base flavor allows it to take on the characteristics of whatever it’s cooked in, from a mouth-numbing mapo tofu made with fermented bean paste and chile oil to a steaming bowl of soondubu jiggae, heavy on anchovy broth and kimchi. The same characteristics that make it great for soaking up oceany broths and brash spice make it a great mild dessert to eat by the spoon, slightly sweetened and tinged with soft floral or herbal flavors.

Known as dau fu fa in Cantonese, tofu pudding is a smooth, silky treat often drizzled with a ginger-infused syrup. It’s served everywhere from street-side carts doling them out in plastic soup containers to New Age Instagram-friendly dessert parlors for millennials. And if you’re lucky, a legit dim sum hall will have its own dedicated dau fu fa cart. A warm bowl of tofu pudding serves as a satisfying snack across all accounts. Although it contains no eggs or dairy, the consistency of tofu pudding is akin to silken tofu or panna cotta. Soy milk is combined with a coagulant (like gypsum powder) over heat, then transferred to the fridge to set into a soft, springy texture. In a traditional Cantonese iteration, once solidified, the dau fu fa gets spooned into smaller bowls with ginger syrup poured on top. With each spoonful, the tofu’s delicate texture melts in your mouth alongside a rich, herbal sweetener.

But it doesn’t stop there. If you treat it like a bowl of plain jook (congee), it serves as a blank canvas—shaped with toppings like chewy boba or hearty steamed sweet potato. In the Philippines, the tofu is served with a brown-sugar syrup and sago pearls, while Taiwanese versions feature mung bean, peanuts, sweetened red bean, taro balls, or almond syrup, and in Thailand, the garnish of choice is fresh fruit. Lighter on sugar, most of these toppings and subtle syrups present a more nuanced flavor to focus on the pudding’s silky texture. Plus, it works equally as well served warm, cold (sometimes over ice), or at room temperature.

For a sublime dau fu fa experience at home, using homemade soy milk (or seeking out a homemade bottle in Chinatown) is the key to mastering a smooth texture. Store-bought soy milks under names like Soy Dream and Earth Balance have additives that both take away from the pure taste and contribute to an inconsistent texture when setting in the fridge. And it’s not as fussy as you might think. You soak the soybeans overnight, blend them with water, boil the mixture, and then finally strain the liquid. Once you combine it with agar (an odorless, tasteless coagulant) over heat, the rest is just a matter of cooling down and waiting for it to solidify in the fridge.

Each batch of dau fu fa that sits in my fridge is an opportunity to experiment with something different, like pandan or chrysanthemum tea-infused syrup, or to merely use up whatever scraping of red bean paste is left in the can. Either way, it’s a simple pleasure each time.

The key to a great dau fu fa is rich, homemade soy milk. As long as you have a blender and something to mimic cheesecloth (like an old T-shirt), homemade soy milk (or any other nut milk for that matter) is not too far out of reach. You can replace the ginger syrup with another infused flavor of your liking (almond works very well), and top with chopped fresh fruit, red bean paste, ice cream, or whatever else you enjoy.