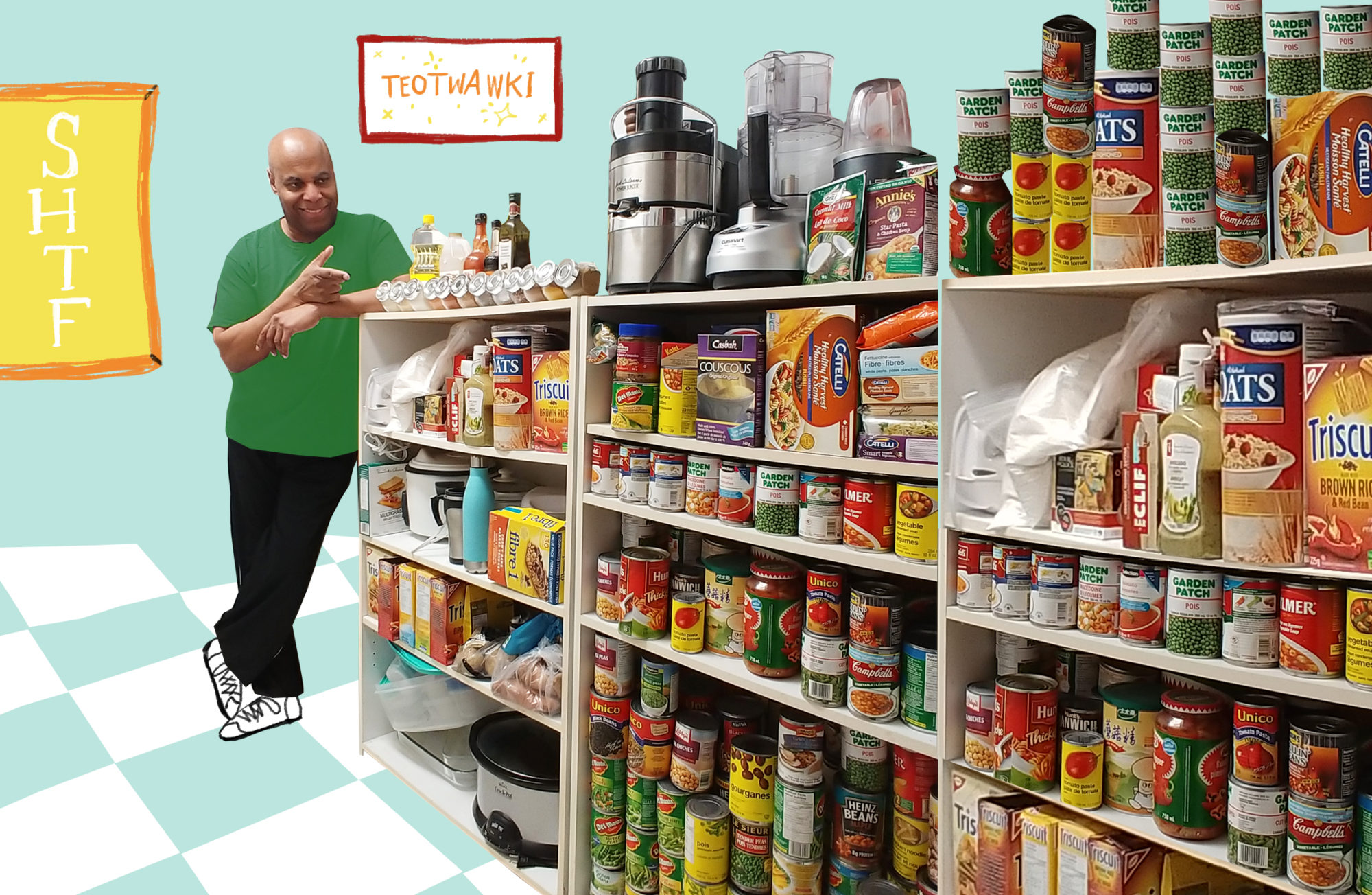 When we think about “preppers,” we think about paranoia and underground bunkers. But who are the people stockpiling cans in their basements, and what will they cook when the shit really hits the fan?

So far, I’ve been lucky. On September 11, I watched the towers burning from my bedroom window, but my Lower East Side apartment remained untouched and accessible. During NYC’s 2003 blackout, I ate doner kebabs at a street party with hundreds of strangers. When Superstorm Sandy approached, I stocked up, cooked all day, and stayed warm, dry, and, except for a few hours, electrically powered in Brooklyn. Elsewhere, for other folks, this was not the case. Like I said, I got lucky. And when you get lucky, you don’t change.

Except that sometimes you do. After partying through the 2003 blackout a handful of blocks north of me, Anna Maria Bounds realized just how fortunate she and her husband had been. “There we were with absolutely no supplies,” says Bounds, now a professor of sociology at Queens College. “We had a flashlight but no batteries. We didn’t have any food because we’re DINKs—we eat out all the time. So it was a really stressful situation. It was fun, but we learned our lesson.”

That lesson was: Be prepared. From there on out, Bounds determined to be ready for the next disaster, whatever and whenever it might be. That is, she became a prepper.

It’s a loaded term, “prepper.” It brings to mind underground bunkers, militias, paranoia, and the apocalyptic fantasies of The Road, The Walking Dead, 10 Cloverfield Lane. But the reality of disaster preparedness is that the movement is far more diverse, urban, and urbane than this easy parody might suggest.

“It’s about becoming self-sufficient,” says Bounds, whose study of urban preppers, Bugging Out or Hunkering Down? Prepping for New York’s Apocalypse, is forthcoming this fall. Many preppers, she says by phone, are “focusing on sustainability, buying locally, upcycling goods—more of a homesteading philosophy.” Often, like Bounds herself, have seen the breakdown of services caused by disasters both natural and manmade, and especially in and around the five boroughs of New York City, she says, preppers are members of minority groups who’ve never had much reason to trust the authorities with their lives. For them, self-sufficiency isn’t so much a spontaneous lifestyle choice as the only logical response to a world that’s always been hazardous.

Right at the center of self-sufficiency is food. And yes, much of that food is canned, but if you’re imagining pantries filled with baked beans and sacks of rice, well, that’s about as realistic as Rick Grimes’s Southern accent—and a direct route to intestinal blockage, not to mention palate fatigue, the depressing joylessness of eating boring food every single day.

“You want to thrive, not just survive,” said Bounds. It was a line I would hear many times as I spoke with preppers—from the New York City area to South Carolina to Texas—about how they plan to keep their diets healthy and delicious when the shit hits the fan. (That’s “SHTF,” common parlance on the prepper Web and in Reddit pages devoted to the cause.) Their advice breaks down along two general lines: Make sure good stuff goes into the cans, and make sure what comes out is even better.

Beyond having enough shelf-stable calories stored away to keep your family alive, the most important thing, according to everyone I spoke with, is to store food you actually like and already eat. If you’re not into lima beans and quinoa now, the End of the World as We Know It (TEOTWAWKI) isn’t going to suddenly wake you up to their wonders.

Luckily, the companies that provide long-term emergency food supplies—such as Mountain House, Wise Foods, and Augason Farms—offer just about everything a survivor might crave, from onions, carrots, and potatoes to kits for making pizza and brownies to a $5,399.97 supply of water and food that can last four people a whole year. They tend to pack everything in three-quart #10 cans, but what’s inside is not swimming in viscous liquid. Instead, you’ll find freeze-dried or dehydrated ingredients, which, since the cans are airtight, lightproof, sturdy, and nearly devoid of oxygen, have shelf lives of up to 30 years. Other cans (and six-gallon plastic buckets), meanwhile, contain plastic packets filled with entire freeze-dried entrées, such as black bean burgers, beef stroganoff, and lasagna, that are easy to transport and need nothing more than hot water to become edible.

“They have every type of onion, scallions, mushrooms,” says Scott Hunt, who runs the Practical Preppers consultancy. “You can get spices and oils and all the condiments, and down to the hot sauce, just to make the rice and beans more palatable. It’s not going to be as good as going out to eat, of course, or making it yourself, but it’s not bad. You’d be surprised how good a 25-year freeze-dried can of chicken is, and you can make chicken salad. It’s really impressive.”

Nutrition, of course, is not to be ignored. You want carbs and proteins, sure, but oils are important for avoiding fatty-acid deficiency, says Hunt’s wife, Laurie, who does the cooking at their South Carolina home. You also need oil to cook things like eggs—a popular ingredient that can be, well, questionable.

“We’ve had the privilege,” says Laurie, “of trying some other people’s eggs, who scrambled them and freeze-dried them, and—”

“They were horrible,” Scott interrupts.

“They absolutely were. The stuff that’s professionally done, you can cook the eggs. They’re decent.”

“I plan on mixing bacon in with everything,” Scott says, “so it’ll be okay.”

Bacon, Scott readily admitted, was a luxury. (He prefers Yoder brand, rated at five years shelf life.) But no one I spoke with said they’d deny themselves an ingredient they loved: Crown Prince albacore tuna, Field Trip beef jerky, Red Feather canned butter, chocolate. (“M&Ms keep better than chocolate chips,” Laurie notes.) Surviving a disaster requires keeping your mood up, and nothing does that like the occasional treat.

Perhaps the best way of ensuring you have canned foods you like is to make them yourself. That’s the route taken by Inshirah Overton, an attorney who lives in New Jersey and got into disaster preparedness after the birth of her daughter three years ago. For Overton, this is less about prepping and more about urban homesteading—the kind of lifestyle that turned a strawberry-picking excursion last summer with her daughter into an object lesson in long-term self-sufficiency.

“You know, she loved it—she was having a great time picking the strawberries,” says Overton. “But in the back of my mind, I was like, How many jars of strawberries can I get? I ended up making 12 eight-ounce jars of jams just based off a couple of pounds of strawberries.”

Overton’s stores are not vast—she lives in one of the nation’s biggest and most crowded metropolitan areas, after all—but she’s clearly preparing to thrive, not just survive. She knows to undercook the rice for her canned chicken and rice, since it will absorb liquid over time, and she throws mixed spice packets (cumin, cayenne, and so on) into all of her food boxes, complete with oxygen absorbers to prolong freshness.

For Overton, who shares her lessons on her Mrs. Vital Survival YouTube channel, canning is not just a means of getting through the next disaster—it connects her with her roots. Both her grandmothers, who grew up in Mississippi and Maryland, preserved food as a way of life.

“They used to keep any extra food, any extra money, any extra anything. They would put it back for later. There was no waste,” she says. Once, she presented her mother with a jar of blueberry jam, which reminded her of her own mother’s “shelves and shelves” of canned goods: “She nearly got brought to tears because it reminded her so much of her mother, and how she used to do it. As a child she used to see all the jars, and the sunlight would come in and glisten…. I was just like, Wow, I had no idea!” Out of the Can, Into Your Belly

At some point, whether because disaster has struck or because you, as a smart prepper, are regularly testing the quality and usefulness of your stores, that food is going to have emerge from its metal, glass, or plastic container and become dinner. If you’ve planned well, you’ve already got ingredients and dishes you like, so cooking should be easy. Still, there are a few tricks to making preserved food taste fresh and interesting.

All preppers recommend keeping dry spices around to liven up meals. But Bounds, for example, also stocks up on essential oils—lemon, orange, peppermint—to drizzle onto her dishes, giving them “great flavor and a wonderful fragrance.”

In an emergency situation, fresh vegetables are unlikely to be available, but Roman Zrazhevskiy, who cofounded Ready to Go Survival after Superstorm Sandy, has a clever solution: sprouts.

“You can buy these big tubs of heirloom seeds—60-pound tubs. They last 15 to 20 years,” he says. “Throw [a handful] in a jar, get ’em wet, and three days later you’ve got salad you can mix in [to anything else you prepare]. Long-term emergency salad!” By combining different types of seeds, you get a diverse blend of flavors that is nutritionally dense to boot.

Zrazhevskiy is also a fan of adding sauerkraut to almost everything. “When it comes to emergency foods, digestion is a big thing,” he says. “A lot of preppers lean toward ferments. I make my own sauerkraut, which lasts a very, very long time, it’s got a lot of vitamins in it, and it keeps your whole digestive system flowing with probiotics.”

His sauerkraut formula, which he makes three gallons at a time, storing it in gallon Ball jars, is one heaping tablespoon of fine-grained Himalayan salt per pound of shredded organic cabbage. Conventional cabbage may contain glyphosate, he said, which can interfere with the development of good bacteria during fermentation.

Finally, there is hot sauce. It keeps well, it’s full of nutrients, and it is, virtually by definition, packed with flavor. Strangely, when I scanned prepper forums and websites for advice and recommendations, I rarely saw it mentioned. Was it, I asked Zrazhevskiy, simply less popular than I’d figured, or was hot sauce so obvious a flavor enhancer that it just went without saying?

“Personally, I think it’s the latter,” he said, adding that he has 10 hot sauces in his fridge—and that his current favorite is something called Da Bomb. Could there be a more appropriate condiment for our postapocalyptic future? I hope I never have to find out.