Get a free recipe
Subscribe
The Power of Flowerpot Baking
By: Dayna Evans Illustration: Yifan Wu 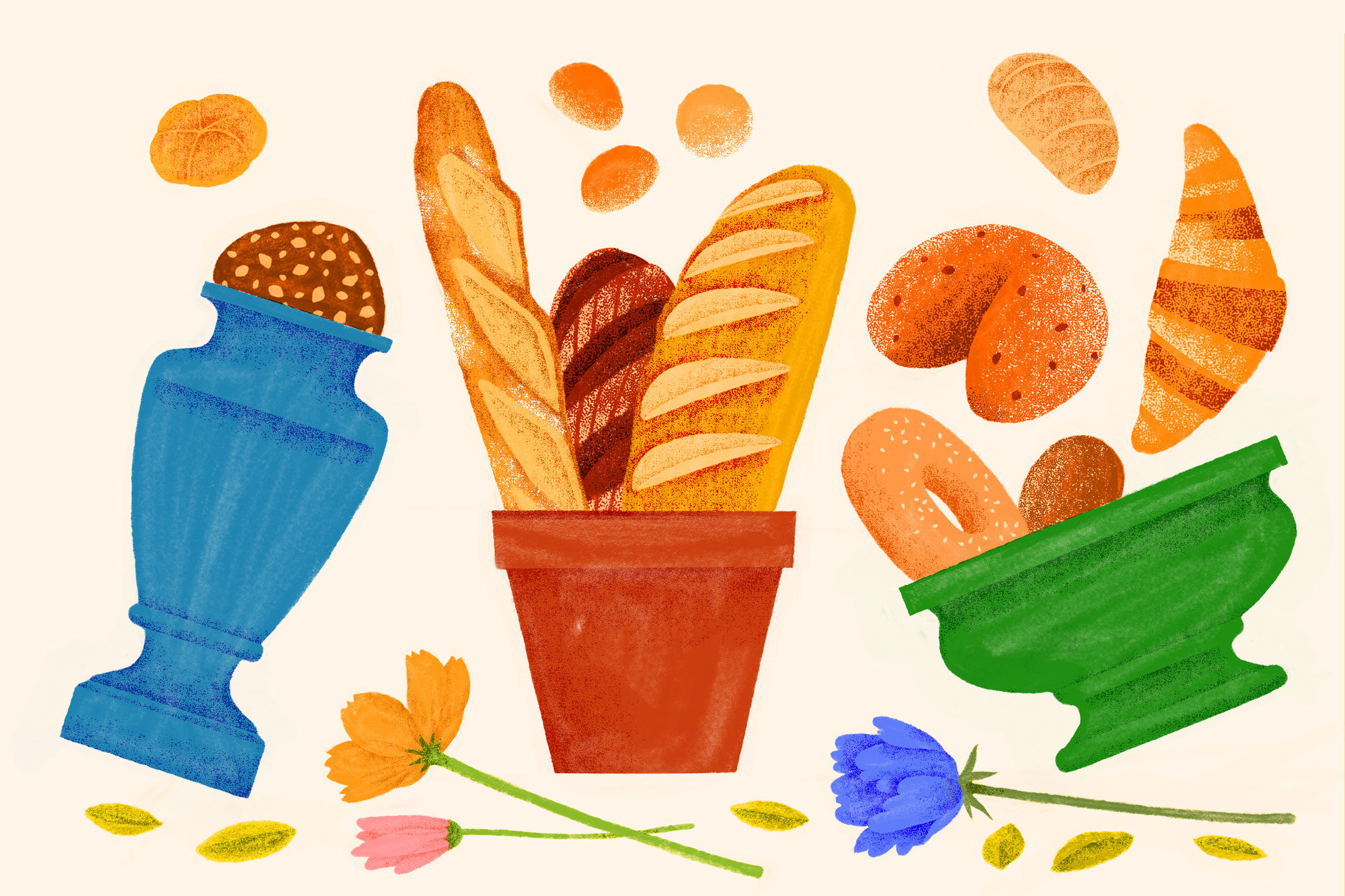 For a crunchier crust, plant your dough in a clay pot.

In a 1974 episode of Good Afternoon!, a youthful Mary Berry, who most Americans recognize as the Great British Bake Off’s former octogenarian judge, announces to her cohost Judith Chalmers: “I’m going to show you how to make a really good loaf.” The bread she summons is not just any old loaf, but a “quick, wheatmeal loaf” baked in a midsize clay flowerpot. “Until yesterday, this had a dead azalea in it,” she declares of her nontraditional vessel. “[A flowerpot] makes a nice, free container, and it’s a nice loaf to slice.”

People have been baking and cooking in clay, like tandoor ovens and tagines, for millennia. There are advantages that come from the porousness of the material, like better insulation and heat circulation. There are the more mythical benefits, too: allegedly, clay neutralizes the acidity in ingredients, making highly acidic dishes like tomato sauce taste sweeter, and some claim that the natural material imparts smoky, earthy flavors to foods. But the specific ingenuity of clay flowerpot baking most likely came about in late-1960s England (thus the Mary Berry recipe popping up on TV in the mid-1970s).

The resurgence of natural grains and cracked wheat in the back-to-the-earth food movement of that era likely explains why people started to use flowerpots as baking vessels, food historian Lynne Olver wrote on the Food Timeline. Before bakeware brand La Cloche capitalized on the resurgence of interest in clay baking in the 1980s, a flowerpot was an inexpensive alternative to setting up a tandoor oven in your backyard.

“I was looking for a clay pot, like a tagine, in which to bake breads, but at the hardware store, I found terra cotta flowerpots.”

But over the past few years, despite the ready availability of cloche ovens and tagines, flowerpot breads of all varieties have popped up in more than a few trendy restaurants. At Anella, in Brooklyn, Joseph Ogrodnek serves flowerpot bread gratis with every meal—an idea he nabbed from Philadelphia’s now-closed Django. At Dirt Candy in Manhattan, multicolored monkey bread has been served in flowerpots, and at Timna—an Israeli restaurant in the East Village that closed earlier this year—flowerpot kubaneh bread was the menu’s star dish.

“I was looking for a clay pot, like a tagine, in which to bake breads,” Nir Mesika, Timna’s former chef, tells me, “but at the hardware store, I found terra cotta flowerpots, and I liked the idea of serving [the bread] in individual portions.”

In addition to its aesthetic appeal, the flowerpot adds its own texture and flavor to the bread, Mesika says. “There is a lot of butter in kubaneh bread, and some it goes out of the bottom hole, so the kubaneh is very crispy on the outside and very fluffy on the inside. The clay pot helps spread the heat well.”

The method is similar to baking brioche—by allowing the bread to rise in the pot, it becomes a more vertical loaf, with a glazed, dark top and softer, lighter sides. Plus, most everyone has a flowerpot lying around, so it’s a little like having a free miniature oven.

“Both yeasted and quick breads are great in flowerpots,” says Erica Shea, cofounder with Stephen Valand of FarmSteady, a site that sells flowerpot bread-making kits. “For elastic doughs, you can bake directly in a well-oiled pot, but for runnier doughs, you will want to line your pots in parchment before baking.”

Although pretty much any dough could work if you throw it into a flowerpot, the method is most effective with doughs enriched with fat, like Mesika’s kubaneh or brioches of any kind. My first attempt was a very adaptable olive oil dough that I topped with an egg wash and sesame seeds.

When preparing a recipe for bread in a flowerpot, both Mesika and Berry advise you to season your flowerpots well by brushing them with oil, baking them at 350 degrees for an hour, then washing them thoroughly before using. You can repeat this process two or three times to really guarantee they’re primed for baking—doing so will make sure your bread won’t stick and that the pots won’t impart a raw clay flavor. (This is roughly the same process you’d undertake if you bought an unglazed tagine or cloche, as well.) If you’re worried about sticking, just line the pot with a little bit of lightly greased parchment paper.

And while you can use a flowerpot that you previously had an azalea in for bread-baking, terra-cotta can hold on to smells—without properly cleaning it, there’s a risk your bread will taste like a garden. But maybe that’s the point.