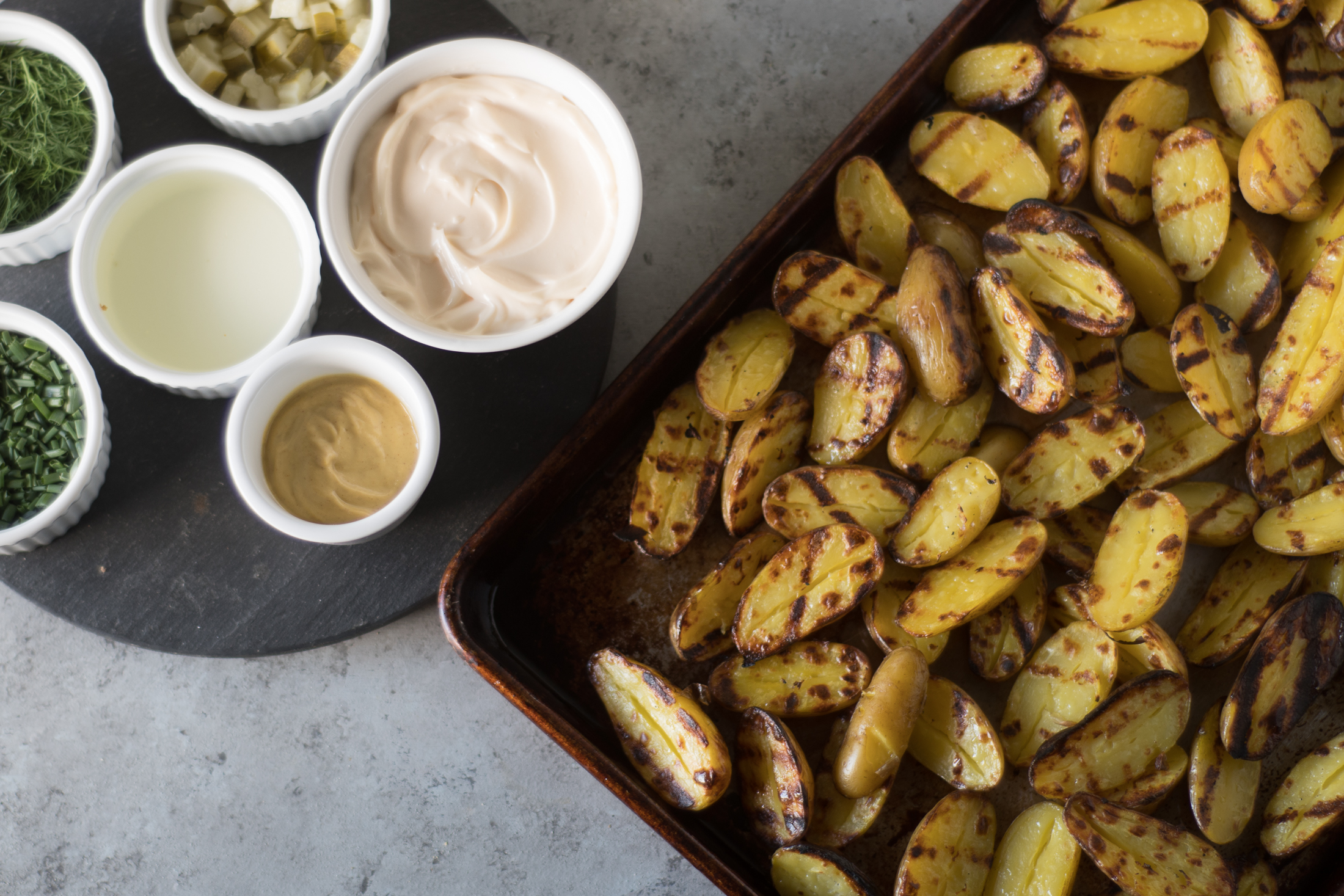 In an ongoing column, Mary-Frances Heck writes about the curious histories, techniques, and recipes that center around our favorite starchy vegetable: the potato. You can read the previous installments about New York salt potatoes, and the mysterious origins of the vichyssoise. Here, she writes about battling bland potato salad with the help of salt, heat, and smoke.

It’s ever-present in the summertime, sitting next to platters of grilled tube steaks and boiled sweet corn—an obligatory mound of pale white potato salad made by the cookout’s host the night before with ease (and not much else) in mind. There are carefully cut cubes of potato, some kind of onion, and occasionally some bits of hard-boiled egg, all bound together with a mayonnaise-based dressing. More often than not, that first bite is disappointingly mushy and astonishingly under-seasoned. But it’s cheap to make and dependably filling—and someone will always be drunk enough to have a few more bites at the end of the night.

But potato salad doesn’t have to be such a purely utilitarian dish. Potatoes, especially served during the summer when they are freshest, should be celebrated—rather than relegated to the blandest bowl on the table. The key to a great salad? Grilling the potatoes so they are both tender and slightly smoky, pairing them with contrasting textures like crunchy onions and pickles, and adding the right amount of salt throughout.

One of the most important things to know when it comes to seasoning potatoes is that they have a unique ability to absorb massive amounts of salt. When I was first learning to cook, a chef taught me to fix an over-seasoned soup by adding a few whole potatoes, simmering for 20 minutes, then removing and discarding the potatoes. The soup had magically become less salty, thanks to the sodium-starved starch in the potatoes creating an osmotic equilibrium with their saline surroundings.

Because of this sodium-absorbing quality, spuds require layers and layers of seasoning—so each bite tastes great on its own. In the case of potato salad, where the ingredients need time to meld, the quantity and frequency of seasoning may alarm some people. To start, I like to season the potato cooking water so it is “salty like the sea.” Then, I cut the potatoes in half, rub them with oil and sprinkle them with a little salt before setting them on the grill. After grilling for a few minutes, they are diced and dressed with what may seem like an unreasonable amount of mayonnaise, mustard and pickle juice, along with herbs, onions and some diced pickles (this is salad after all, so there has to be something green and crunchy).

The result is a salad where each bite is loaded with flavor—not just the bites where you happen to catch a stray herb. By searing the potatoes (and the onion to boot) until just charred, but retaining a bit of crunch, the smoke of the grill perfumes the whole dish, and you’re left with a salad that’s ready to pull its weight—not just weigh the picnic table down.