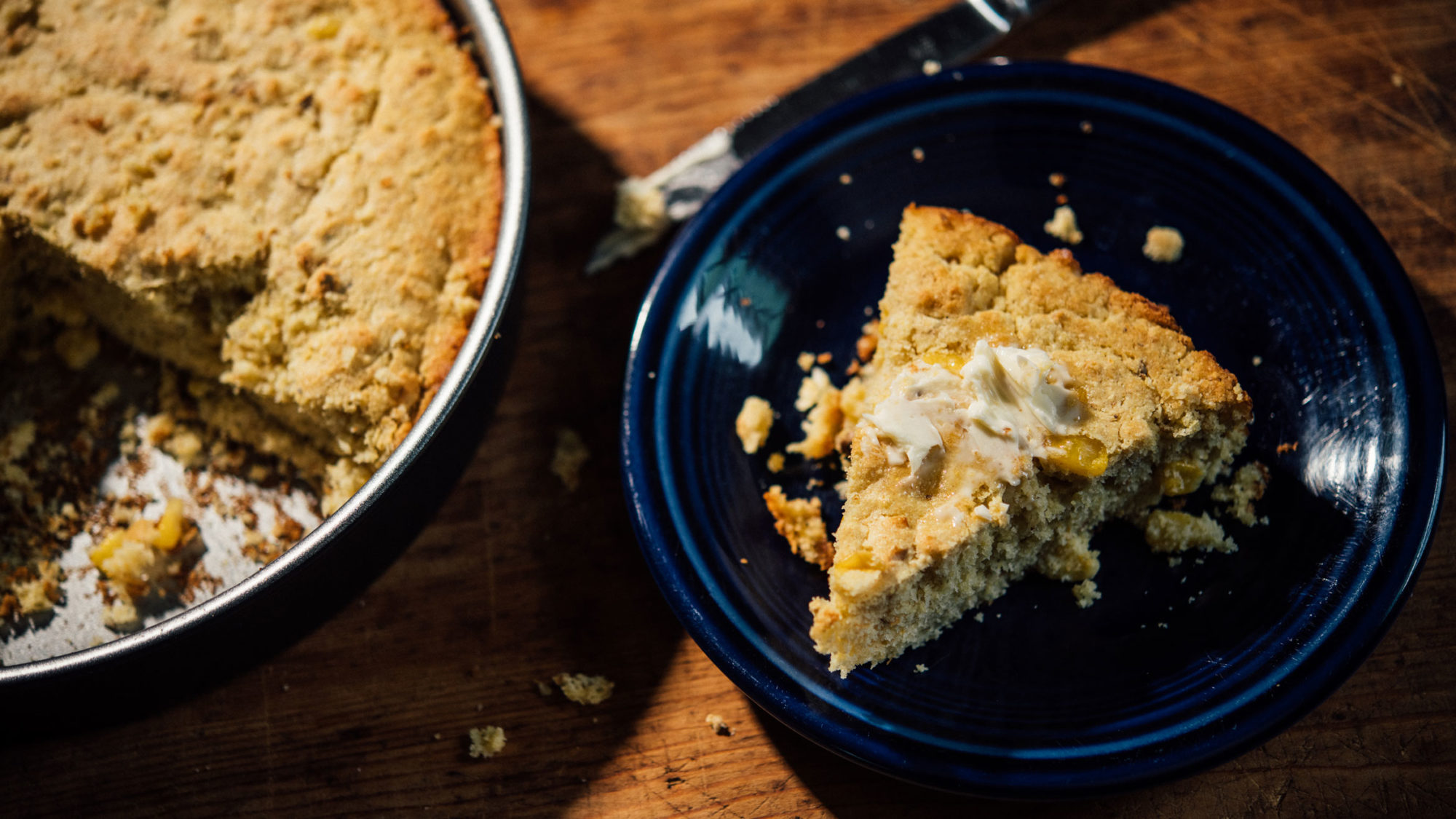 Break out the food processor and pulverize some popcorn.

Popcorn cornbread is precisely what you think: cornbread made with popcorn. Easy. The cornbread you know, made even more likable.

There is a solid chance that you, like I did, think popcorn cornbread constitutes tufts of popped popcorn suspended in aerated animation. Nope. Or that popcorn cornbread defies physics, puffing over the skillet’s edge like a popped corn kernel’s endosperm bursting from its hull. It ain’t that either.

Instead, popcorn cornbread has the precise carriage of the standard cornmeal loaf, with an invigoration of popcorn flour. Yes, I am talking about flour made from popped popcorn. You can make popcorn flour at home (see below). Like, tonight. That way, it will be ready for its starring role in popcorn cornbread, the inspired creation of Molly Stevens, one of the United States’ best cookbook authors, and a recipe that was nearly omitted from her latest book, All About Dinner.

Cookbook-making is glory. Cookbook-making is heedful documentation. Cookbook-making is brutal. Cookbooks are containers, and, like all receptacles, they have volume limits. In its first draft, All About Dinner “was a book about everyday cooking, not a dinner book,” says Stevens. “There was a chapter on breads and crackers. That chapter was cut when we started focusing on dinner, and that chapter had the popcorn cornbread. I said we absolutely couldn’t lose that recipe.”

I knew none of this when I called Stevens. I knew only that she had again developed a faultless recipe that upended the simple, familiar foods I thought I already knew. She told me more: how the idea for levigating popcorn came from recipes for popcorn focaccia and popcorn-flour sandwich loaf in a book she loves, 2003’s The Cornbread Book by Jeremy Jackson.

This popcorn-flour notion came from historical events, not Jackson’s brain. During World War II, President Harry S. Truman insisted that bakers use less wheat in their loaves because the grain was scarce. Enter popcorn flour, which was easy to source and a fine complement to the limited wheat supply. Popcorn flour became so beloved that it continued being used in loaves even after wartime—until a bad popcorn crop happened. Trends come; trends go. Just ask avocado toast. Remember him? Stevens had been playing with popcorn flour for years: baking Jackson’s focaccia, pressing waffles, griddling English muffins. Then, in the enviable way she does, as she was working on All About Dinner, she amplified the inherent corniness of cornbread by adding sweet-corn kernels and popcorn flour. When I first baked Stevens’s popcorn cornbread, I hardly noticed the popcorn essence. Had someone served it to me without naming its private core, I would have been able to pinpoint that this cornbread was different. I would not have been able to say how—only that there was subtle magic afoot, like dew’s appearance when water vapor turns to liquid in the hours slightly before dawn.

Other than the corn magnification, Stevens’s recipe is quite conventional, ready for kitchen deployment upon first read—that is, if you assume all cookbook recipes work. I do not, because I know the sinking truth: too many cookbook recipes do not deliver what they promise. Stevens’s recipes always work, as I have proclaimed before. When you adjust the recipe’s salt based on whether you use unsalted or salted popcorn to make your popcorn flour; when you dry the thawed sweet corn, per her instructions, to avoid sogging the batter with added moisture; when you use one of two oven temperatures, depending on whether your oven is convection or not: Stevens’s is precise recipe writing. This is how a new, reliable recipe for an old, beloved standby is born.