Get a free recipe
Subscribe
The Pie, Reprised
By: Pam Brinegar 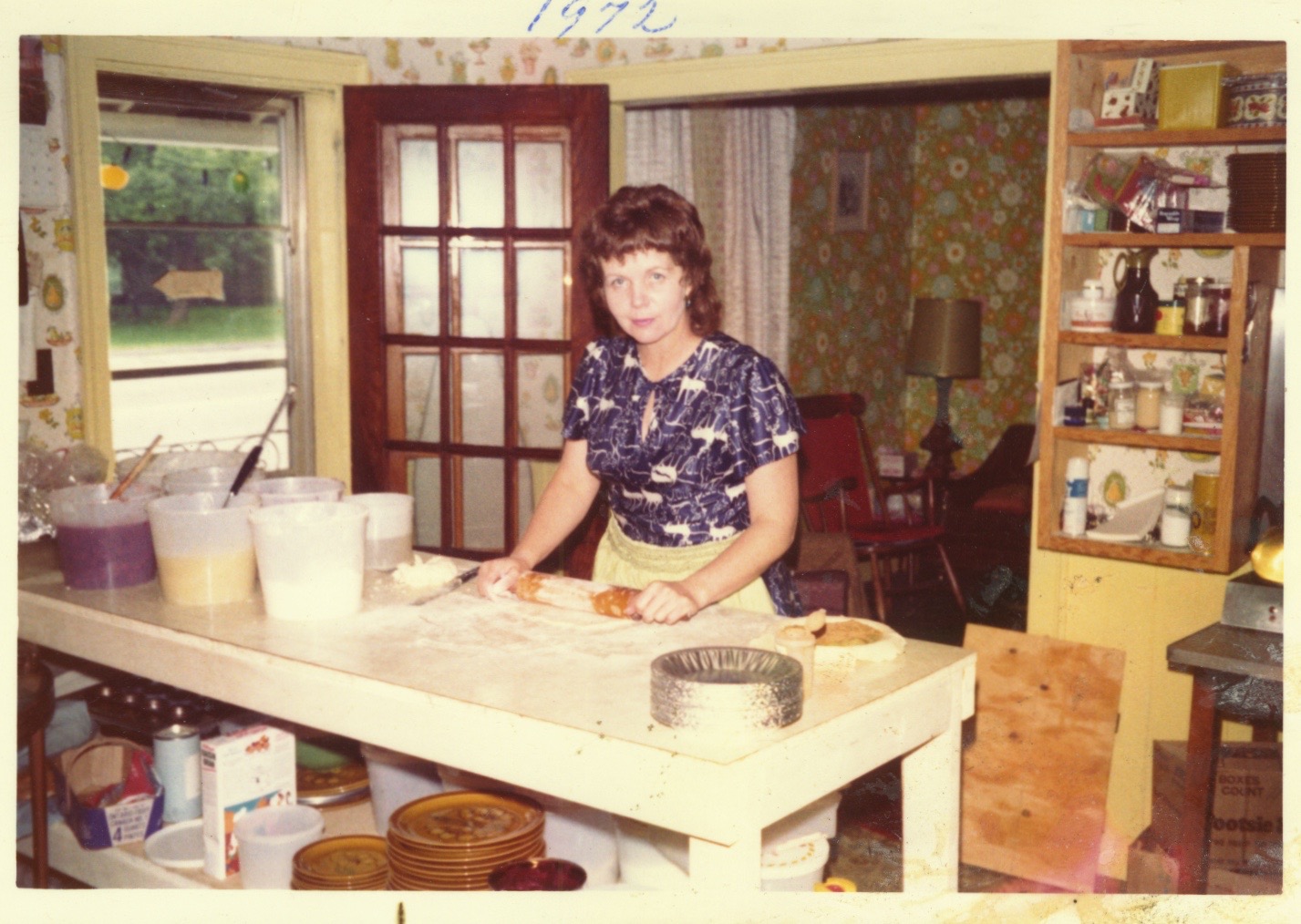 In this short piece of fiction, a mother specializes in pie crusts made out of confectioners’ sugar and memorably super-sized batches of Cheez Whiz.

During her final, rather foggy years, Mother often told people, “I can’t cook any more, but I used to enjoy it very much.” As someone who knew her for over sixty years, I am reminded of Lady Catherine de Bourgh in Pride and Prejudice, who said of playing the piano, “If I had ever learnt, I should have been a great proficient.” Her comment aptly describes Mother’s relationship to the kitchen.

Focusing the lens another way, it could appear that everything Mother cooked was exotic. Each item was unusual and unexpected, each part of a memorable event. She did not have a repertoire, but rather gave unique performances punctuated by years of respite. A fairly complete listing of these productions includes The Pie (ca. 1949), The Oatmeal (ca. 1952), The Cheez Whiz (ca. 1959), and The Biscuits (ca. 1982).

The Pie was likely Mother’s first solo kitchen excursion. Her own mother, Edna, held firm, efficient sway over food production.  One afternoon, my mother, recently re-married, was determined to use Edna’s well-stocked kitchen and demonstrate her own domestic skills for her new hubby. She would prepare a pie from freshly-picked blackberries.

Recipe in hand, she closed the kitchen door and set to work. Mother did not know that behind the free-standing wooden cabinet’s roll-back doors was a flour bin with a sifter on the bottom. Or that turning the sifter’s crank would provide ready flour for baking. The cabinet’s upper shelves held sugar, corn starch, baking powder, confectioners’ sugar, bicarbonate of soda, cream of tartar, and salt in unlabeled jars of varying size. Unable to tell the difference among these, Mother created a pie crust using confectioners’ sugar rather than flour and a fruit filling containing salt instead of sugar. It was not a success.

When my brother was old enough to sit in a high chair and eat solid food, Mother served several batches of oatmeal so dense that each came free from the pan in a single clump. The sections she cut off with a sharp knife and placed into our bowls would hang as large blobs on the ends of our spoons, dripping the milk and sugar that could not penetrate their mass.

Mother’s next cooking project was successful. Somehow, she obtained the recipe for homemade Cheez Whiz, a spreadable cheese-like substance for which we children had developed a fondness at school. In a bid for efficiency, she made a lifetime supply in just two days. We had gallons upon gallons of this substitute that she sealed in jars, packed in freezer bags, stuffed in the refrigerator, and lined across the counters in assorted containers. Three days later we could no longer bear to look at the stuff, yet had to sit at the dining table and finish our allotment before being excused. Happily, the entire mess soon ended up in the garbage. Our grandmothers were coming to visit and they would need the space to prepare food more to their liking, Mother said.

Years later, she found a magazine recipe that seemed foolproof and decided to give it a try. This effort was not for her ungrateful family members, but to benefit others. She worked all evening and well into early morning. The results—stacks of perfectly formed dog biscuits—looked great. Mother presented each dog with one of the homemade treats. Both sniffed the proffered items and both walked away without accepting them. After that, no one remembers her cooking anything else. Not ever.

Concerned about misrepresenting Mother’s cooking ability in a callous and cavalier manner, I called my brother and read him my account. “This is okay as far as it goes, but you forgot the other pie,” he said. “The one in the brown paper bag that caught fire and destroyed the stove.” Ah, yes, The Pie Reprised (ca. 1970).

How could I have forgotten? It was her only culinary effort that was completely consumed.