Get a free recipe
Subscribe
The Pickled Cucumbers That Survived the 1980s AIDS Epidemic
By: Mari Uyehara Illustration: Carolyn Figel 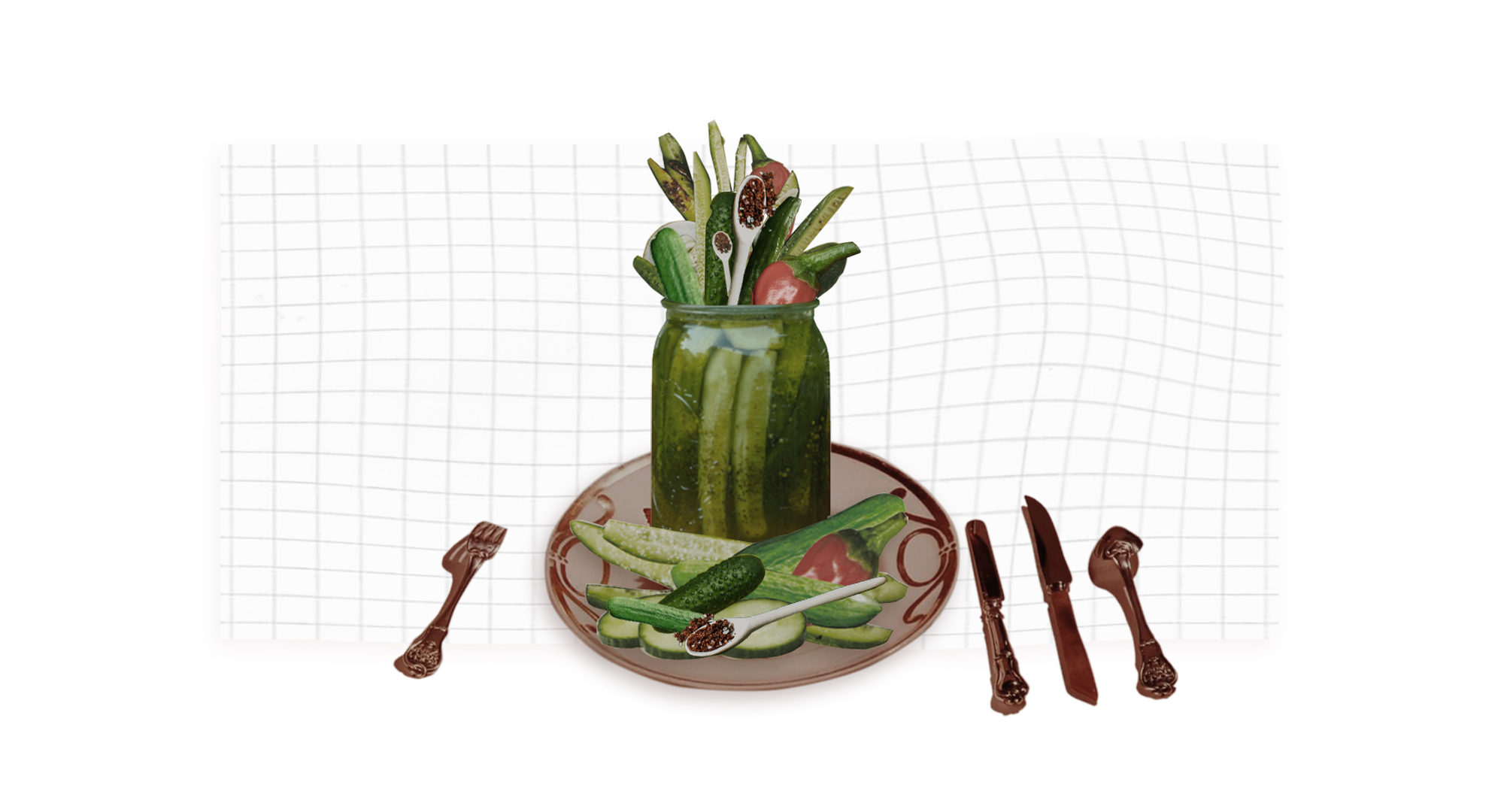 I don’t really remember Richard. He passed away when I was a little girl. But I do know his pickles. These pickles wouldn’t meet the Instagram standards of today. Thank God. Garlicky and slicked with chile-infused sesame oil, they are stained brown from soy sauce and have a soggy bend. If I eat one, I will eat another and another until I sheepishly close the container and return it to the refrigerator so that I don’t eat them all. In my parents’ house, they are known as Richard’s Pickles.

In the 1970s, Richard, who was born in Beijing, was an art-history professor at Mt. Holyoke College in South Hadley, Massachusetts, while my mother was a premed student there. He wasn’t like other academics in that field, the nonpracticing appreciators. He had attended a studio art school in Taiwan before pursuing a PhD at Princeton. And so, when he was explaining a painting technique in front of a class, he could also demonstrate it beautifully with elegant sweeps of the hand. In part because my father was an artist too, a potter, they all became friends.

My parents have many friends who cook and cook well. But they have always spoken about Richard with a particular kind of reverence. “Richard would never let oil hit the pan without salt,” my father used to say. My father, I think, saw something foundational in this small culinary practice—a commitment to seasoning and setting up every dish for maximum flavor before thinking about any other ingredient. Perhaps it was an artistic acknowledgement of the dedication and process that comes before the finished product. Richard’s cooking was good in the details, but also in broader strokes. “He would cook five different Chinese dishes at the same time,” said my mother, still in awe of the nonchalance with which he would whip up a stunning feast. Richard was technically closeted, in that he didn’t tell people he was gay. But almost everyone in his circle knew. “He even had a fake girlfriend,” said my mother. “Well, she didn’t think she was fake,” added my father. His fake girlfriend was an art-history student at Mt. Holyoke. In those days, being gay felt more taboo than an older male professor dating a younger female student. Richard never finished his dissertation at Princeton, perhaps over some disagreement with his adviser, and had to leave his teaching job at Mt. Holyoke. He eventually found a gay community in New York City and relocated there, working as a fabric designer. By that time my parents were raising two young children, and they saw less of Richard.

“Your father is still mad at Mt. Holyoke for not giving him tenure,” my mother said. “They didn’t have anyone else with his talent then, and they haven’t had anyone since,” my father retorted. Richard’s eye for art and ability to curate a show was something special, more special in my father’s mind than a silly academic formality. “Well, I don’t blame Mt. Holyoke,” my mother said. “Finishing your dissertation is a basic requirement.” My father rolled his eyes. Richard never finished his dissertation, and he also never cooked from a recipe, at least not that my parents can remember. So it is somewhat funny that in my parents’ recipe box, the one card with a name on it is his: “Richard Hsiao’s Pickled Cukes 1971.” My father scribbled notes while Richard made the dish and simultaneously shouted out directions. Richard cured the cucumbers with salt and garlic, letting them sit for an hour to draw out the vegetable’s water.

Then in a wok, he smoked sesame and vegetable oils with small dried chile peppers, Sichuan peppercorns, and Korean pepper, layering their fruity, spicy, and numbing flavors in the velvety, nutty liquid. He tossed the hot chile oil with the cucumbers, and then with a few slices of ginger and dashes of soy sauce, sugar, vinegar, and just a pinch of that unfairly maligned flavor booster MSG. We have these pickles with beef and broccoli or ribs marinated in black beans, hoisin, and soy sauce or sometimes just with a salami sandwich and crinkly chips at lunch. My father has been making these pickles for 47 years now. The recipe is now older than Richard lived to be.

Richard died in 1986 of complications related to AIDS, the same year my youngest brother, Tomi, was born. The year before, the Hollywood movie star Rock Hudson was refused service on commercial airlines after his diagnosis became public and died shortly thereafter, and 13-year-old Ryan White, a hemophiliac, was barred from Indiana public schools. It was before protease inhibitors and Magic Johnson, when death swiftly followed diagnosis. There hadn’t even been a name for it until 1982. Entire communities, in dance and art, in New York and San Francisco, were wiped out. Michel Foucault, Keith Haring, Robert Mapplethorpe, all gone.

The summer of the diagnosis we visited Richard at his brother’s house in Cape Cod while we were vacationing nearby. I was five years old and my brother Ryoji was two. My mother handed Tomi to Richard for him to hold. He seemed shocked that my mother wanted him to cradle her newborn. “Richard, just don’t spit on him, okay?” my mother said, ribbing him as she always did when he got too serious. My father had lunch with him in New York once more, but that would be the last time we all saw him together. Richard’s family buried him in a private funeral.

“I think that was the first time I saw you cry,” my mother said to my father of Richard’s passing. My parents had been together for 17 years by then.

“No, that was when he called me up with the diagnosis,” said my father. “What do you say?”

“I still miss Richard,” said my mother. “All we have left are his pickles.”

What We Talk About When We Talk About American Food. In this column, Mari Uyehara covers American food at unique cultural moments and historical turns, great and small. Photos by Jenny Huang.