Get a free recipe
Subscribe
Phil Rosenthal vs. a 7-Year-Old
By: Evan Wittenberg Illustrations: Joanna Neborsky 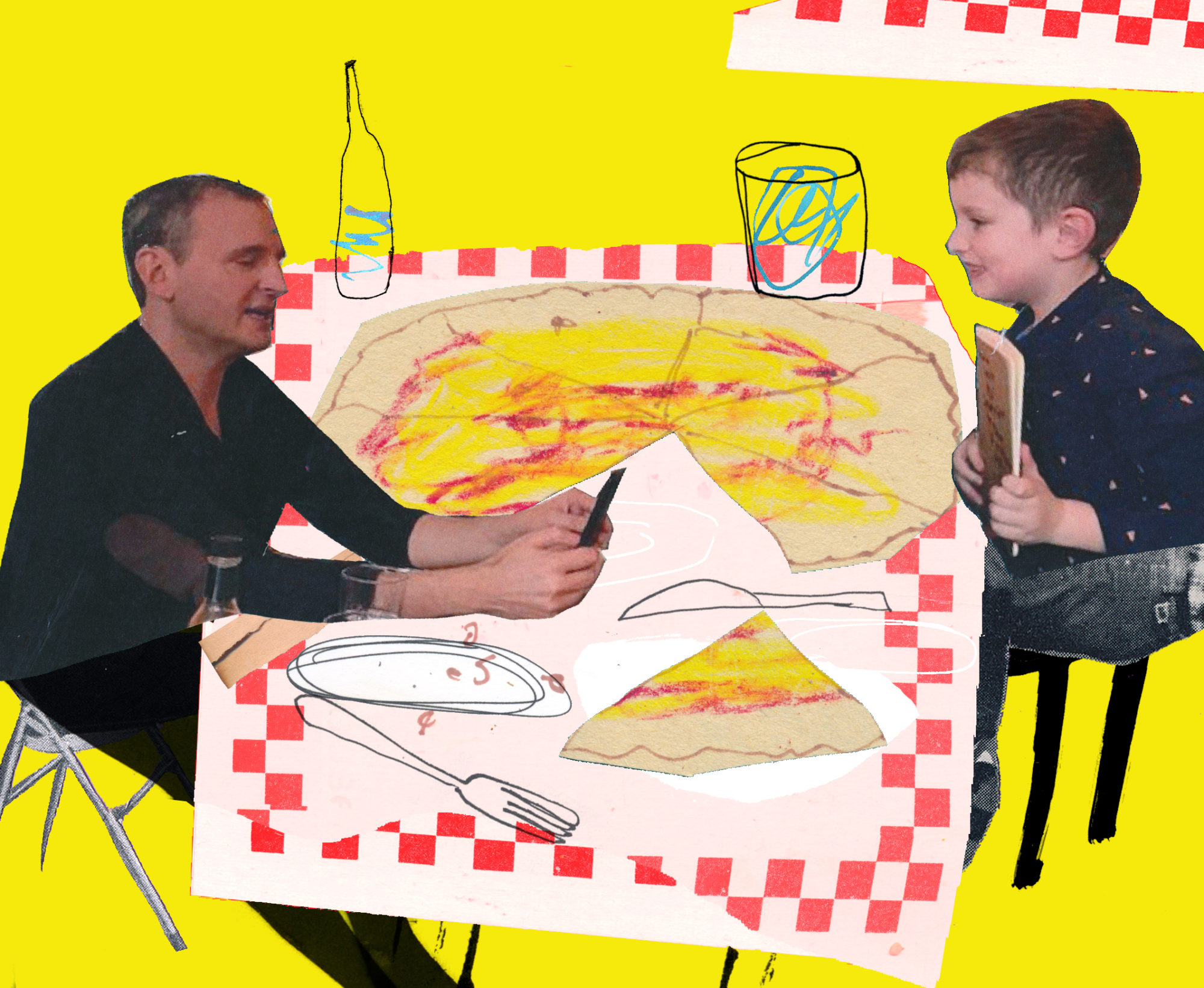 A television-food dude meets his match.

We love the new Netflix series Somebody Feed Phil, a food and travel documentary series hosted by TV writer and charming human being Phil Rosenthal. The show, which previously appeared on PBS and won a James Beard Award along the way, is special in the fact that it’s not trying to be special. Rosenthal, who created the widely syndicated series Everybody Loves Raymond and is a partner in Los Angeles restaurant Mozza, knows a lot about food. More than he lets on, actually. And on the show, Rosenthal tackles popular—if not slightly populist—destinations like Tel Aviv, New Orleans, and Lisbon, and explores them with an open mind and an earnest point of view. We love the show, but we don’t love the show as much as seven-year-old TASTE reader and proud Philadelphian Evan Wittenberg does. Recently the two had lunch at the Meatball Shop in New York City, where Evan grilled Phil about eating eel, getting lost, and his PG-13 language.

I have a little book of questions.
I’m so excited to get to them, Evan!

My mom wrote all these questions that we talked about. Luckily I can read everything. OK, first question. Do you bring extra clothes in case you spill food on yourself on the show?
Wow. That is a fantastic question. I really should bring extra clothes, and sometimes the director and the producer will say, “Do you have an extra shirt?” And I say “Yeah, back in the hotel.” I think I’ll never spill on myself. And you know what happens? I always spill on myself.

My next question is, my favorite episode was Tel Aviv. Is Israeli food in Israel different from the Israeli food in New Orleans?
Another great question. I have to tell you that if you like a certain food, I want you to go to the place where that food is from. Because it’s always going to be better. Now in New Orleans, you’re smart to notice that the number one restaurant in New Orleans is that Israeli restaurant. But as good as that food is, and it’s really good—it’s called Shaya, the restaurant—it’s even better in Israel. Why? Because that’s what the restaurant is trying to emulate. Have you been to Israel yet?

No.
You gotta go. By the way, birthright, you know you get to go for free. I’m sure a bunch of people have asked you this question, and you probably answered it already. In the Tokyo episode, what was it like to eat eel?
To eat eel. I gotta tell you: Eel is not so different from any other fish. It just doesn’t have the fins. And eel is a fish without the fins. So the fish, the meat part of the eel, is very good. Now what you saw on Tokyo was, they gave me a piece, and it was very crunchy because all the bones were there. And there, they eat the head, the skull. Do you want to eat skull? [Laughs]

Um…
I don’t recommend it. That’s not my favorite thing I ever ate, skull.

Have you ever gotten lost while you were traveling?
Sometimes after we’re done filming, maybe in a restaurant, I’ll go walk. And then if I didn’t have my phone with the GPS, and the—

I was just going to ask you if you had a GPS.
I do, of course. When I was your age, we didn’t have that. We had to take a map, a big paper map, to see where we were.

I prefer a GPS, because it’s so hard to fold up the map. Once you’re done with it, you have to fold it back up.
I agree. I agree. Can I tell you something funny? I was in one place, I won’t say where it was, but I was in one place and I was looking at my GPS and I had my headphones in, with the cord plugged in, listening to music as I was trying to find my hotel. And all of a sudden, a scooter rode up on the sidewalk, and took the phone right out of my hand! Stole the phone! Yes! That can happen! So the lesson is, don’t be out in the street holding your phone for everyone to see you have a phone, a nice phone. Keep it down low if you have to check it.

Why should other kids watch Somebody Feed Phil with their families?
Oh, that’s a great question. I think because it’s designed for you to watch with your family. There’s no bad words, really.

Well, yes.
There was one?

In New Orleans.
What did I say?

When I watch the show, I drive my parents insane because watching you eat makes me hungry, and then I’m like, “Mom, can you get me some food?” and she’s like, “In a minute,” and then I’m whining for 20 minutes.
You sound like me! I watch the show, too, and I say to my mom, “Hey, how about something to eat? I’m hungry!”

How do you pick your cities to travel to?
I go to the places that I think people want to go to the most.

I think you should come because it has the word “Phil” in the beginning, P-H-I-L.
What a great promotional tie-in I could do. You’re like a marketing genius. I think that’s a great idea. Somebody Feed Phil…-adelphia.

Evan Wittenberg lives in Philadelphia, PA. He is seven.