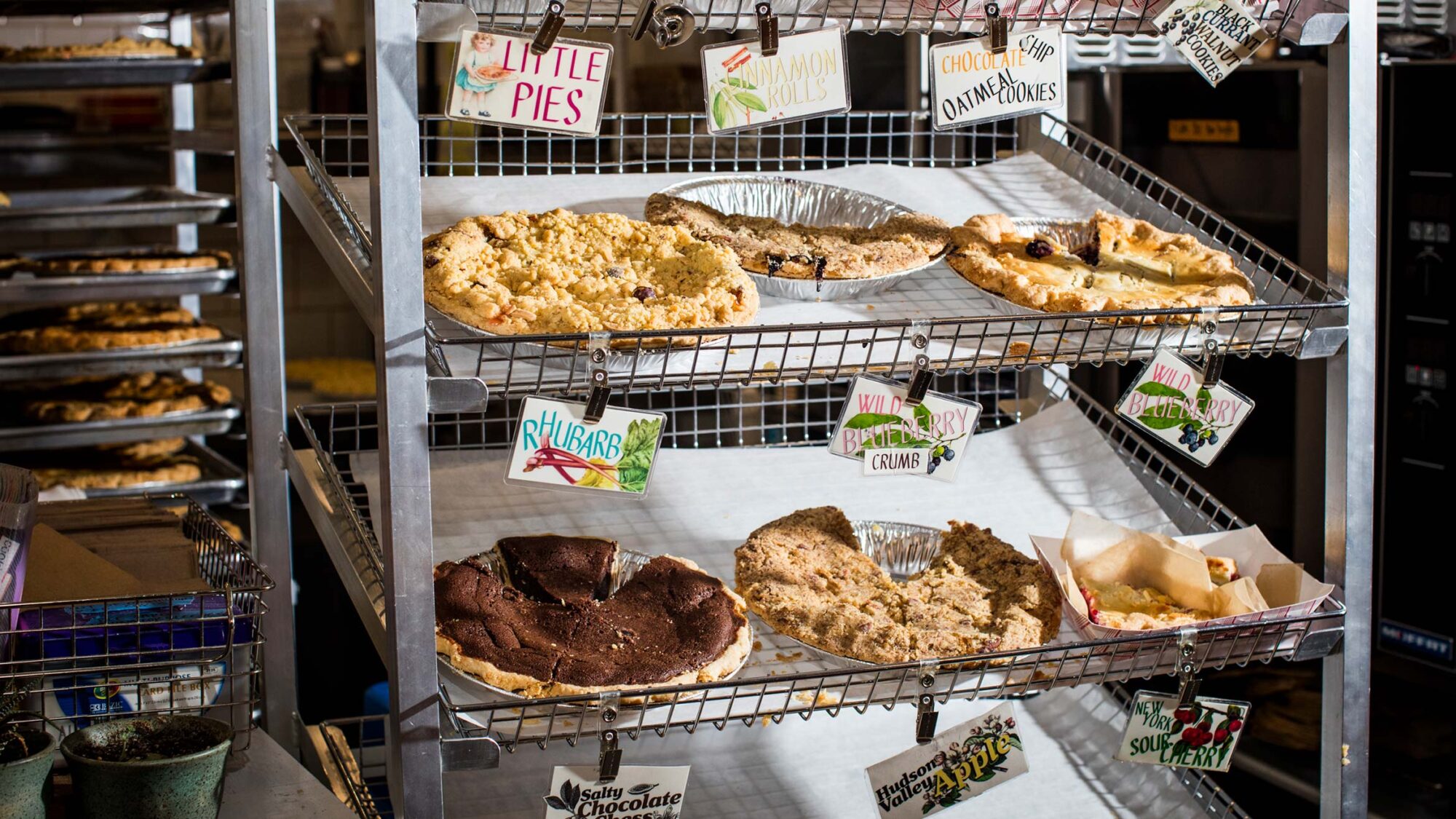 Breaking down the anatomy and aesthetics of a perfect pie with the owner of New York’s favorite late-night pie shop.

Petra Paredez grew up in a pie family. As she writes in a new cookbook, Pie for Everyone, her parents started Mom’s Apple Pie Company in 1981, as “two destitute hippies” living in Virginia on a struggling farm. To make ends meet, the solution was pie. Lots of pie. And to their surprise, Mom’s Apple Pie became a statewide success and a thriving business. When kids came along, the whole family would use vacations as opportunities to rank and dissect other pies, from piemakers far and wide. These would become formative experiences for Petra, and before long, her standards for what really constituted a good pie—a rich, flaky crust and fresh ingredients that don’t need heaps of sugar added to taste good—were ingrained.

Instead of joining her mom and dad and her siblings at Mom’s Apple Pie, though, Petra decided to start her own shop with her husband, Robert. How did she choose to deviate from her parents’ pie? It came down to crust: specializing in an immensely buttery, impossibly flaky crust that shatters under the tines of a fork. Petee’s, (a tribute to Petra’s childhood nickname) opened on the Lower East Side of New York in 2014, and in 2016, New York magazine declared Petra’s pie the absolute best in the city. A second location followed in Brooklyn in 2018. Before the coronavirus pandemic, it was a beloved late-night stop for drunk food. Petra’s cookbook is the technicolor culmination of six years of professional pie-making and a lifetime of informal family research. With more than 80 different kinds of pie, from classic pumpkins and rhubarbs to wild cards like tahini chess pie, to savory mincemeat and quiches, Pie for Everyone really does have a little something for all of us. Don’t like pie? There’s a recipe for cheesecake in there, too. (More on that later.)

I recently called Petra in New York, where both shops are currently open only for takeout and mail order within a 50-mile radius, as she and Robert prepare for what is sure to be their most unusual and unpredictable Thanksgiving season to date. “One thing we can maybe count on happening is people really wanting to have that full Thanksgiving experience,” she explains a few months before the big November pie crush. “Everybody is seeking refuge in their families and friends, since it’s been such a disorienting time.” A little pie can go a long way to help. You begin the book by outlining your personal pie standards. What are a few non-negotiables for you when it comes to pie?
Crust is super important to me. Even if it’s not my style of crust, I still want it to taste really good and buttery. I want it to have a texture that makes you want to eat the edge crust and everything, where it’s not so tough that the bottom crust won’t yield to your fork. When it comes to filling, I don’t want a fruit pie to be so congealed that it stands up. To me, a good fruit pie does sort of fall apart, if it’s really tasty. That’s part of why our pies aren’t really great for wholesale. They taste impressive and look really nice in the pan, but when a slice is on the plate, it’s going to fall apart a little bit. When you’re compromising texture for aesthetics, that’s a dealbreaker, and it’s much more important for me to have a pie that’s juicy.

I’ve noticed that aesthetics are a huge thing on social media in the pie community—beautiful cutouts and perfect lattices are everywhere.
I think I have a good ability to look at a photograph of a baked good and sense whether it’s going to taste good or not.

What a superpower. How can you tell with pie?
There is a lot of pie Instagram stuff that is really impressive, with really beautifully braided crusts, or they’re constructed in these interesting ways. While you can do that and have fun with my crust recipe as well, the way it settles as it’s baked is sort of up to fate.

Growing up in a family pie business, what was it like establishing your own distinct path when you opened Petee’s?
I bet a lot of kids who grow up in their family’s small businesses are able to identify what their parents do really well—and how you would change it, how you would deviate if you could. For me, that was really specializing in one thing. My butter crust started out very much like my dad’s, but then I added more butter and less water, and that really makes it shatter, especially when the pie is still hot or reheated. It’s just butter suspended by the right amount of flour. The flour that we use tastes really good and really clean, too. That’s something that’s important to me, because a lot of pie crusts are really flour-heavy, with a lot of water to make it easy to work with, and then they taste more like flour than pie.

What do you tell people who are intimidated by making the crust?
My main advice is to trust the process. At some points, it will feel like it’s not going to come together and that you’ll need to add a lot more water. You don’t. Work through the point at which it seems too crumbly, and it will become cohesive. Manage your temperatures really well, too. I don’t see a lot of recipes that specify to chill the flour, but that will give you a little more working time with the dough. You need to use your hands at some point, no matter which way you do it, so if you don’t mind getting your hands dirty, you might as well do it by hand from start to finish. I think that that way of making a pie, the physical action of squeezing the butter and getting your hands dirty, feels pretty good. It’s therapeutic. You’re putting your own energy into the pie.

Something that has been often debated on the internet is whether cheesecake can really be considered a cake, or if it’s actually a pie. Can you settle it once and for all?
A cheesecake is a pie to me, partly because I want it to be. Flour is generally important for a cake. A cake should have a crumb. A cheesecake [on the other hand] is mostly just a custard that you can lighten up by folding egg whites into it. It has a crust, and it has a custard filling that you bake in the crust. That’s pretty straightforward for me—within those parameters, cheesecake is definitely a pie.

4 RECIPES WE LOVE FROM PIE FOR EVERYONE:

Tahini Chess Pie
In this nutty spin, the butter in a classic chess pie is swapped out for creamy tahini.

Sour Cherry Pie
Sour cherries have a fleeting season, but this recipe will work with the frozen variety if you can get your hands on some.

Key Lime Meringue Pie
A coconut crust teams up with a custardy filling and a vanilla sea salt meringue topping.

Butterscotch Cream Pie
This custard filling is tinted golden brown with vanilla and caramelized molasses, and the whole pie is topped with a layer of fluffy meringue.

Last week, we talked about the world of nonalcoholic cocktails with Julia Bainbridge, the author of Good Drinks.

After years of research, reporting, and undercover work in the field, Benjamin Lorr has released The Secret Life of Groceries, which digs into the economics and logistics that fuel the American grocery store.

One of our perennial favorites for fall baking is Benjamina Ebuehi’s sleek, minimalist cookbook, The New Way to Cake.

If you’re starting to maybe, finally, get into the swing of fall meal planning, you might find some helpful wisdom in Gina Homolka’s Skinnytaste Meal Prep.

The Nom Wah Cookbook is full of elegant dim sum and lively stories about the characters and institutions that make Chinatown one of New York’s most exciting neighborhoods.

Did you preorder Flavor, the latest from Yotam Ottolenghi and Ixta Belfrage? If so, your receipt could earn you some pretty cool bonus recipes.