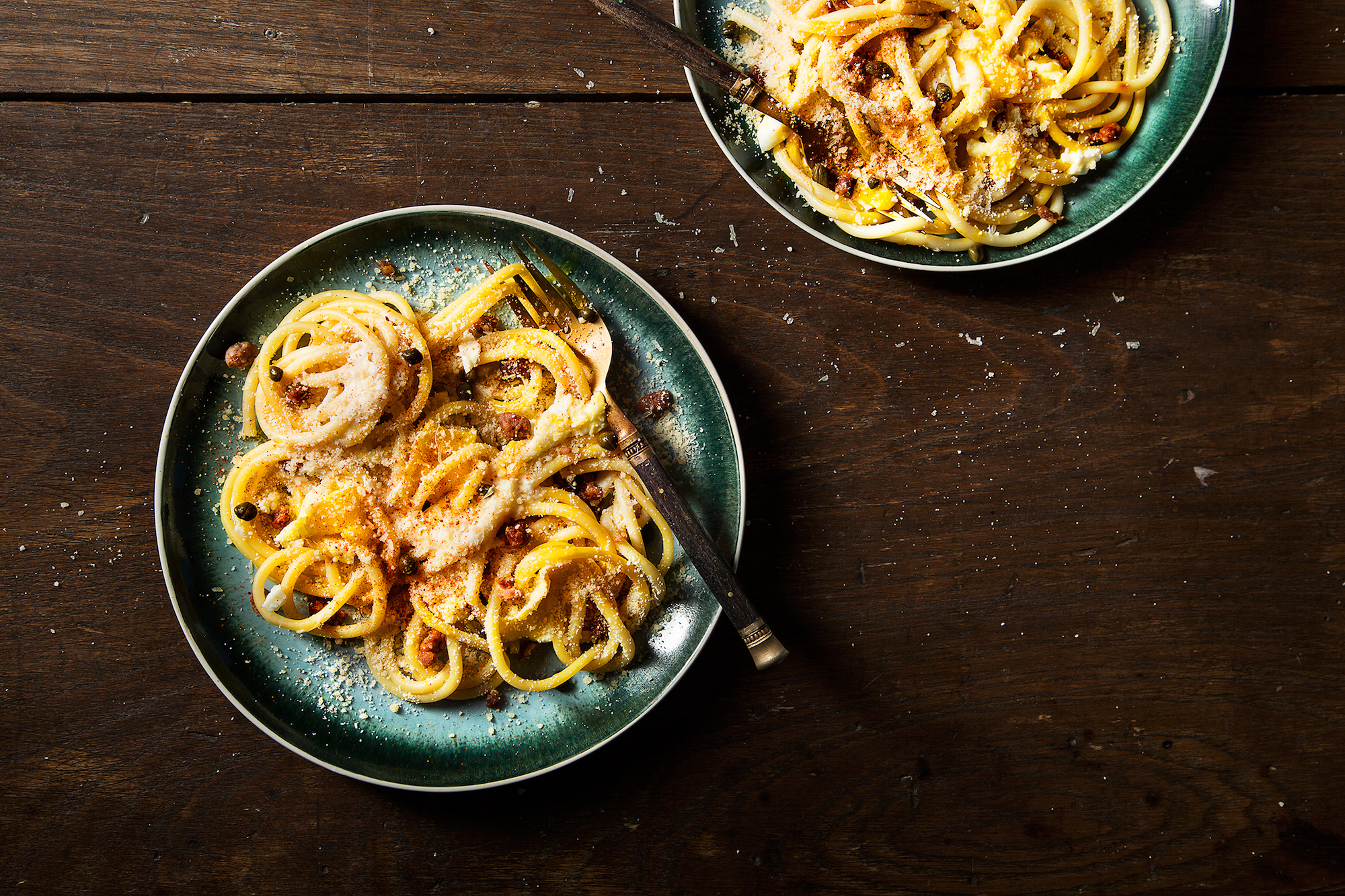 Being a college kid in a place where I could drink legally meant that I slept until 11 a.m. on the weekends, and even then I had to drag myself out of bed. Times were tough. But the thing that made it worthwhile was the pasta that awaited. Red, white, and green corkscrews were dressed simply in garlic and olive oil. The garlic had been sautéed until there was a hint of acrid burntness to it, and the olive oil was viscous and creamy.

It was life affirming. It made me feel like I could get through the hangover and the homesickness to make this the best-years-of-my-life, capital-E Experience study abroad had been billed as. Yes, I got all that from a bowl of pasta. And I spent years trying to re-create that dish, or at least the feeling of it—that everything will be okay—by experimenting with olive oils and pastas that ran the gamut from fancy imported to grocery-store generic, and playing with heat levels to cook the garlic just so.

The thing is, even if I returned to Salamanca, I’d be unlikely to have this same meal because it’s an anomaly. I wasn’t engaging in some long-standing tradition. I was eating a comfort meal concocted by the señora of my host family.

Jeff Koehler, whose cookbooks include Rice, Pasta, Cous Cous and SPAIN: Recipes and Traditions, says that if one in Spain, or at least Catalonia, were to whip up a quick, simple pasta dish, it would likely be served with tomato sauce, not garlic oil. Not only that, but there, he says, rotini is more often used in a cold pasta salad. And pasta for breakfast?

“My wife, who is Spanish, says that it is impossible that a Spanish person eats pasta for breakfast,” he says. “It really is unthinkable to have pasta before lunch.”

In a way, that makes the memory feel all the more magical, like the señora knew to make that meal for me at that moment. I even briefly wondered if I had dreamt the whole thing. A quick Facebook chat with my roommate from that time confirmed that the pasta had been real. It did not leave as deep an impression on her as it did on me, but she ended the conversation with “Haha, pasta for breakfast is genius.”

That seems to be a growing consensus. I learned I wasn’t alone in eating pasta for breakfast the first time I went to Little Goat in Chicago and had Stephanie Izard’s weird and wonderful Breakfast Spaghetti. From a technical perspective, it seemed barely possible: The spaghetti was crispy around the edges but swimming in a lemony broth and all bound together with poached eggs. It was topped with crabmeat and guanciale, but none of the flavors fought or overpowered.

Scott Tacinelli and Angela Rito of Quality Italian in New York City and Denver are also on the pasta-for-breakfast train. Theirs comprises maple bacon, a poached egg, and crispy potato strings, to evoke hash browns, on top of square spaghetti alla chitarra, made with buckwheat flour to remind diners of pancakes. While the chef-owners concede that the dish probably wouldn’t fly in Italy, they say American diners are intrigued. “They are usually very excited about the idea of a pasta for breakfast, especially one that actually tastes like breakfast.”

Basically, pasta is becoming accepted as just another breakfast starch, in the same vein as toast or grits. It works well with eggs and meat and cheese. Honestly, it probably wouldn’t be bad with avocado and pickled carrot, à la Sqirl, either.

All of this has changed how I approach my own breakfast pasta. I’ve moved on from trying to create an exact reproduction of what I had in Spain—the Original Breakfast Pasta. (I once made the joke in my head: “You down with OBP?/Yeah you know me!” But best we leave that alone.)

The goal became making a dish that’s interesting, a little greasy, a little salty, well balanced, and somehow quintessentially breakfast-y. Inspired by Little Goat, I started making my breakfast pasta brothier and poaching the egg right in the broth, and I experimented with longer but still thick pastas, like chewy tubes of bucatini and floppy, flat expanses of pappardelle, both excellent vehicles for egg yolk. I don’t often add meat, but if I do, it’s usually chorizo. I use as much fluffy, finely grated Parmigiano as will fit, plus sometimes some Gruyère for meltiness.

Call me a quitter, but I haven’t re-created Izard’s dish, either (and I’ve learned that she’s taking it off the menu, so add that to the list of foods I’ll never get to experience again), but the spirit feels the same. It’s putting all the most soothing foods together in a unexpected way and making something that you just can’t stop eating.

The recipe is below, but it’s one that begs for riffing and adapting. Use what you have on hand! Add whatever meat, cheese, vegetable, or spice you’re craving! Then flop down on your couch and linger over it, sipping coffee, reading the paper, or scrolling through your phone. If you feel warm tingles of comfort and satisfaction, like a cat in a sunny spot, you’ll understand what breakfast pasta is all about.