Get a free recipe
Subscribe
Pasta Don’t Preach: Why You Should Cook by Pasta Shape, Not Name
By: Colu Henry Photos: Peden + Munk

I did some quick math, and over the last two years, while writing Back Pocket Pasta, I’ve likely eaten roughly 60 types of the flour and water combination. For a normal person, this may seem like a lot, but research shows that there are upwards of 500 (!) types of pasta in all different shapes and sizes, so clearly I’ve just scratched the surface. That said, after spending much of my time developing, testing, and writing pasta recipes, I’ve determined that being super rigid about the shape of a noodle should be thrown out with the pasta water (please don’t actually do that — pasta water is your friend). Shameful! Sad! Terrible? Actually, just the opposite.

I know that many Italians will give you the evil eye over this one, but I firmly believe that if the general type of pasta is in the same family as a recipe calls for, the dish won’t be ruined. If you choose to use linguine fini, as opposed to spaghetti, the world is not going to come to an end. In fact, my good friend and Bon Appétit food director Carla Music, who is as Italian as they come, goes completely rogue and uses the fusilli shape, which some consider the most versatile, for her Alfredo recipe, as opposed to traditional fettuccine. Why? She likes how the peppery butter and cheese emulsion gets caught in the crooks of the corkscrew.

I’ve made it numerous times and wholeheartedly agree that this shape also works well. It made me wonder if some pasta shape and sauce pairings are based more on tradition than functionality. Would the classic Amatriciana dish works just as well with mezzi rigatoni (a short, ridged tubed) as opposed to bucatini (a long, hollow spaghetti-ish tube), which it is always served with? It just might.

The whole point of Back Pocket Pasta is to use what ingredients are available around you and not get too hung up on recipes. I think the same goes for the type of noodle you use. Yes, in general, it’s good to know broadly what type of pasta works best (see below), but chances are if you’re in a supermarket in the middle of nowhere, malfadini (a long, ribbon-like pasta with ruffled edges) is going to be hard to find. Heck, you might have trouble in Brooklyn, too, unless you’re popping by Lilia, where chef Missy Robbins makes it by hand. Fact: It’s worth the detour.

What I believe to be most helpful is a quick reference for choosing the best pasta for your sauce, so I’ve broken them down into four groups. But remember, pasta is supposed to be fun, so at the end of the day if you’re making carbonara and all you have left is a half a bag of egg noodles, chances are if you don’t scramble those eggs, it will still taste great. With that, here are some suggestions:

Long and lean: Cuts such as linguine, spaghetti, linguine fini, and spaghettini fall into this category. They work well with non-tomato-based sauces; otherwise they have the potential to get drowned. Olive-oil-based sauces, such as Alio Oilo, Cacio e Pepe, and Vongole, are a good bet.

Long and wide: Think about pastas that have a flatter, broader surface, such as tagliatelle, fusilli lunghi, and fettuccine, which all have the real estate to handle richer tomato sauces, ragùs, and cream sauces.

Short and curvy:  Shapes like fusilli, gemelli, and campanelle are the most versatile — perfect for catching bits of vegetables, meat, and seafood in their nooks and crannies. They also work well with a simple marinara or just plain butter and cheese.

Short and tubular: Rigatoni, paccheri, and penne all come to mind and can stand up to heavier, chunkier sauces: Think beans and sauces that are meat-driven. The middle of the pasta will capture bits of sauce, allowing you to construct that perfect bite.

FUSILLI ALFREDO
This recipe comes from one of my dearest friends, Carla Lalli Music. We met while working together and discovered that her family also hails from Avellino, a small province outside of Naples, so we developed an immediate kinship. Alfredo is her favorite back pocket pasta. “My mom cooked this for me most Saturday nights when I was growing up, and I used to throw my body over the bowl to keep my dad from eating half of it out of my plate—then I’d yell at him to stop eating it straight out of the pot,” Carla told me. Her recipe is a true Alfredo, which means no cream, milk, or flour. The sauce is a glossy emulsion of butter and starchy pasta water, which she finishes with lots of black pepper, like you would a carbonara. “Whoever you make this for will know instantly that you love them very much. At least, that’s what it tastes like to me.” Spoken in true Carla fashion.

DIRECTIONS
1. Bring a large pot of water to a boil. Add 2 tablespoons of the salt and return to a rolling boil. Add the pasta and cook until al dente, according to package directions. Reserving 1½ cups of the pasta cooking liquid, drain the pasta and let sit in a colander while you prepare the sauce. (I know I usually don’t drain the pasta, but in this one case I make an exception because it’s Carla’s recipe and I trust her implicitly when it comes to cooking.)

2. Return the pasta pot to medium heat and add the pasta cooking liquid. When it comes to a simmer, gradually whisk the butter into the pasta water, one piece at a time, waiting until one piece melts before adding another. Once you’ve added all of the butter, the sauce should look creamy and glossy, not greasy and broken. (It will seem pretty thin, and you might worry that it is too loose, but fear not.)

3. Gradually whisk in the Parmesan, adding it by the handful and making sure it has melted before adding more. Return the pasta to the pot and toss rapidly until all the noodles are coated and the sauce has thickened somewhat.

4. Plate in bowls topped with a few grinds of black pepper and more Parmesan cheese, if desired.

COOK’S NOTE: Carla recommends using the smallest holes on a box grater, as the Microplane can make the cheese too fluffy and it has a tendency to make stuff gloppy when it melts, instead of “coat-y.” Alternately, you can blitz it in a food processor until the cheese forms very small beads.

BUCATINI ALL’AMATRICIANA-ISH
This Roman dish generally calls for guanciale (cured pig jowl), but I like to use pancetta, which is more read­ily available and can be found at most grocery stores. If you can’t find it, bacon works, too, but will give the sauce a smokier flavor (I’ve used in it in the past with great results). I also opt for red onions as opposed to the yellow variety. Their sweetness couples nicely with this spicy, salty sauce, plus their pink color strewn throughout the sauce makes for a vibrant contrast.

DIRECTIONS
1. Bring a large pot of water to a boil. Add 2 tablespoons of the salt and return to a rolling boil. Add the pasta and cook until al dente, according to package directions.

3. Add the tomatoes to the skillet, crush them with a spatula or the back of a spoon, and stir to combine. Season with salt and black pepper and allow it to simmer while the pasta finishes cooking.

4. Add the pasta and parsley directly to the skillet and toss to combine, adding ¼ cup of pasta water or more (up to 1 cup) as needed to loosen up the sauce. Add the Pecorino Romano and reserved pancetta and toss again.

5. Plate in bowls and pass Pecorino Romano at the table, if desired. 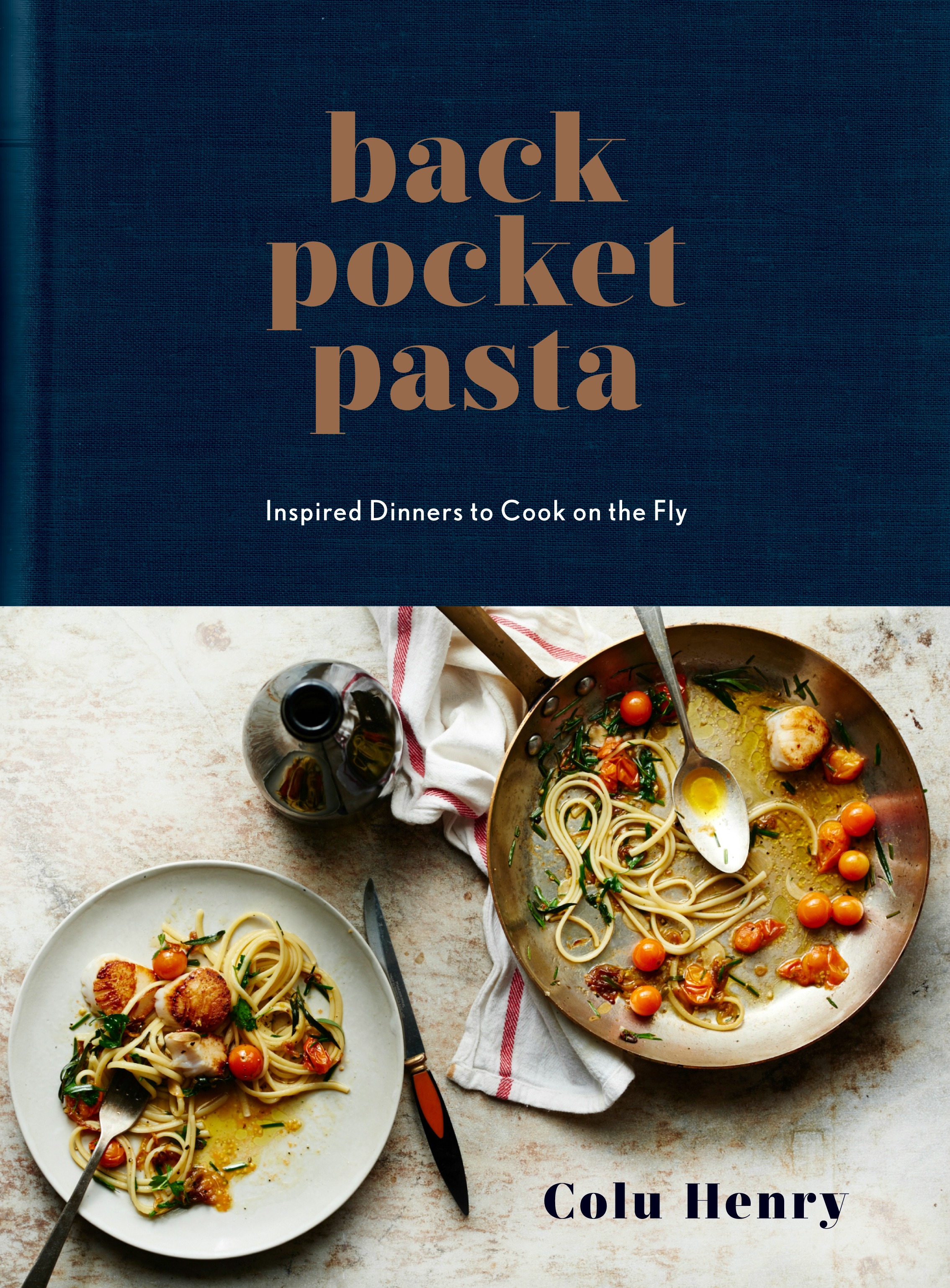 Colu Henry is a food and lifestyle influencer who created the Instagram hashtag #backpocketpasta, which has been embraced by magazine editors and tastemakers. Previously, she was the Director of Public Relations and then the Director of Special Projects at Bon Appétit. Her writing has appeared in Refinery29, Cherry Bombe, and Wine Enthusiast. She lives with her husband in Hudson, New York.