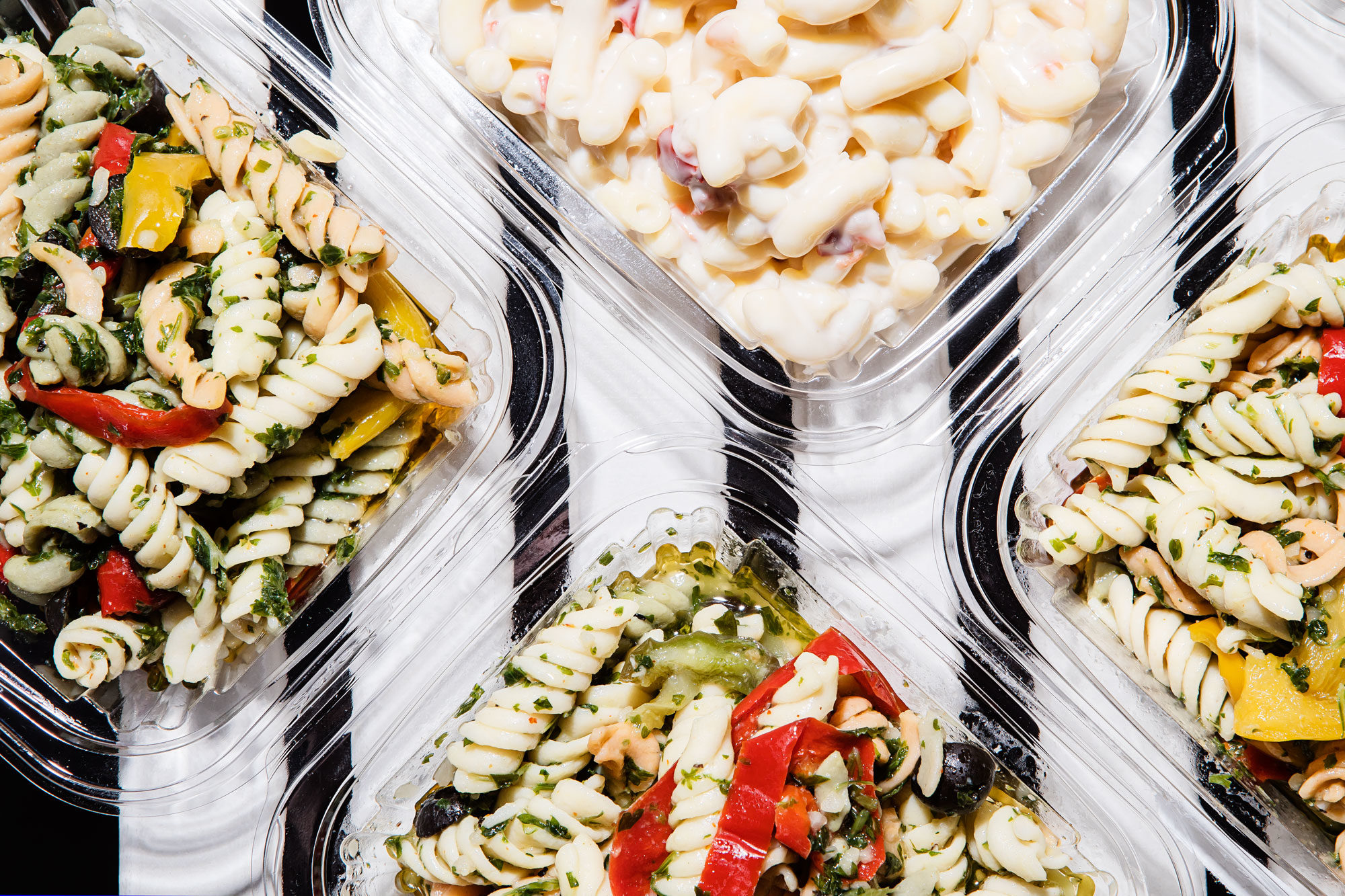 Pasta salad, universally loved and debatably not Italian-American in origin, is worth more than the convenience it offers at picnics and barbecues.

Among my strongly held food convictions is the belief that there are some foods made to be eaten warm that are, in fact, better cold. OK, maybe not better, but at the very least their own, very good thing. Since childhood, I’ve ordered General Tso’s partially just for the morning after when the sweet, sticky sauce takes on a crunchy, hardened texture like a shell of sugar. The cult of cold pizza runs strong, and I’m a believer. But above all, I’m a cold-pasta guy.

When I was a child growing up in the suburban tristate area, summertime pasta meant one thing and one thing only: cold, delicious gluten. It’s a staple of backyard barbecues and an actual dish (rather than just leftovers, like old pizza), even if no one actually thinks about it, because it’s like the sweatpants of food. You’ll most likely find it made with mayonnaise or vinegar-based sauce, but pesto is also common, and there are really no limitations. In a recent text, my mom accidentally captured its frumpy appeal by calling it simply “carb salad.” But when it’s done right, the dressing sticks to and coats the noodles without making them soggy, and the pasta itself tastes pleasantly chewy and a little gummy.

“When pasta or bread or anything made of cooked starch gets cold, starch goes through a process called retrogradation, which is when gelatinized polysaccharides, mainly amylose, but also amylopectin, revert to a crystalline structure,” explains J. Kenji López-Alt, pasta salad dabbler and author of The Food Lab. Former Noma fermentation guru and current MIT Media Lab fellow Arielle Johnson affirmed this in another conversation, while adding that she, too, enjoys a good pasta salad. “It will get denser as it cools down, but the bigger textural difference is the mix of starch and water will not be able to move around as much. It’s not pliable,” she says.

I’ve always thought of pasta salad as a peculiarly American treatment of pasta, and not even necessarily Italian-American. Recipes have been printed in the U.S. at least since 1916 and can be found in cookbooks like The Silver Palate Cookbook, Yankee Church Supper Cookbook, and the iconic classic The Joy of Cooking.

It first appeared in Joy in 1943, when Irma Rombauer hedged in the headnote by writing, “this is so much better than it sounds.” (I don’t know, Irma; it’s always sounded really good to me.) In one recipe, readers are advised to marinate the pasta for two or more hours in French dressing—the vinaigrette, for which Rombauer had a whole “Rules for French Dressing” section, enhanced with paprika, sugar, dry mustard, and the optional garlic—with the addition of, “in any desired quantity,” chopped green pepper, chopped pimiento, chopped celery, grated onion, salt, and paprika. That’s combined with mayonnaise, and served on lettuce, with strips of more pimiento.

“When Irma first encountered it in the early 1940s, when she was in St. Louis, people were basically treating it like a potato. Just as a starch-heavy salad,” recalls her great-grandson John Becker, who with his wife, Megan Scott, is working on a new edition of The Joy of Cooking. “Our peak pasta-salad edition is definitely the 1997 book. Before then we only had basically one recipe for pasta salad, and then there’s actually a page and half devoted to pasta salads. That was a high water mark.”

In the 1997 edition, there are recipes for creamy macaroni salad (reduced fat), pasta salad with grilled chicken and avocado, and both tortellini and, oddly, ravioli salad. There’s a particularly good one for penne salad with olives, capers, oregano, and feta you crumble and mix with the pasta before it cools so that the salty, tart cheese coats the pasta.

Marcella Hazan apologized for including pasta salad in Classic Italian Cooking. “You can go all over Italy and you don’t find pasta salad,” she told the paper of record.

Saveur editor in chief and Piatti author Stacy Adimando says you can find recipes in some Italian-language cookbooks, but she doesn’t think it’s necessarily Italian. “My hunch would be that it’s like fra diavolo or spaghetti and meatballs in that it started in the States and migrated backward to Italy,” she says.

Pasta salad is no spaghetti and meatballs, but it was once popular—and controversial—enough that The New York Times, in 1996, published an article about Italians mad at pasta crimes including, yes, pasta salad. In it, Marcella Hazan apologized for including pasta salad in Classic Italian Cooking. “You can go all over Italy and you don’t find pasta salad,” she told the paper of record. Hazan, whose books are considered essential for home cooks, accepted responsibility for the spread of pasta salad. (To which we say, thank you, Marcella.) In 1997, she remorsefully claimed to the Baltimore Sun that she’d put pasta salad in the book “as a joke.”

My Irish-American dad is a self-styled alt-salad master, and he’s been experimenting with pasta salad for most of his life. “I made so many different varieties. I put shrimp in it at some point. Peppers. Sometimes I’d just put in, like, sun-dried tomatoes,” he told me recently with Queens braggadocio. (Tres ’90s.) But he does have a few rules: fusilli over shells or ziti, for the nooks and crannies; decent oil; pepper flakes; the importance of basil. His versions tend to have mayonnaise. Most of all, he stresses that “having firm pasta is an important part of pasta salad.”

My dad grew up in a broken home, with an abusive turned absentee father, and found refuge in family like his uncle Ray, who owned a red-sauce restaurant in New York. He’d make his version with Wish-Bone Italian dressing and “cruddy” grated Parmesan cheese out of a can. (Likely Kraft, my dad says.) It wasn’t something Ray ever served at his restaurant, just at family gatherings. “When I was young and poor, one of my aunts would make this old macaroni salad with celery and tuna that I still love,” he says. “I hate to say it this way, but the pasta salad was lower-class, white trash Irish food.”

But those associations never deterred him. At the end of the day, my dad loves pasta salad for the same reason Alice Waters, the Pioneer Woman, Yotam Ottolenghi, and I like it. You don’t have to spend much or try hard to make it—or worry much about it being at optimal serving temperature; just leave it in the fridge—and you certainly don’t have to try hard to like it. What’s there not to love? It’s cold, chewy starch.

Chris Crowley is a staff writer with New York magazine's Grub Street, where he edits the Grub Street Diet and writes about highballs and other important matters.