Get a free recipe
Subscribe
Parle-G: It Me
By: Jaya Saxena Illustration: Adrian Mangel 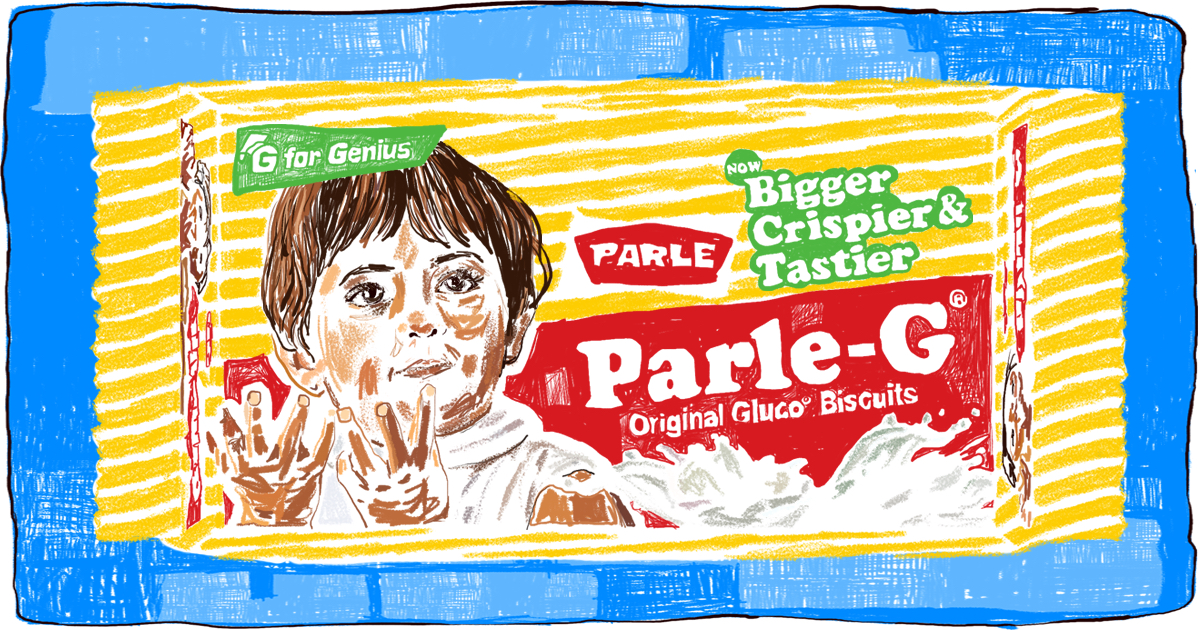 If you grew up in an Indian household or neighborhood, chances are you probably grew up eating the biscuits in the yellow-and-white package.

The earliest, clearest, thought I have of Parle-G biscuits could be boiled down to two words: it me. The iconic yellow and white wrapper featured an image of a small brown girl with short, black hair and chubby arms—presumably seconds after licking crumbs off her fingers. These were my cookies.

Parle-G is a rectangular “gluco-biscuit” (a weird term for your standard, slightly sweet tea biscuit) with its name stamped in the middle and surrounded by a decorative border. It’s mildly sweet and malty, and after eating around four of them, all moisture will be sucked out of your mouth. The toasted rectangles are made for dunking in tea, a no-nonsense way to start the day and get all-around nourishment. There are no chocolate, no sprinkles, no fun shapes or colors. And yet Parle-G is the taste of childhood for anyone who grew up in an Indian household or neighborhood.

In 2011, Parle-G was the largest-selling biscuit brand in the world, and it still dominates the market. The company website claims 16,383,600 Parle-G biscuits are eaten every hour. But aside from their popularity, Parle-G is an example of what happens when the colonized take control of a product introduced by their colonizers, a British proclivity (tea and biscuits) that no longer has to rely on demand from the British. Parle-G is also a cultural touchpoint for a diaspora that otherwise has less and less in common. We may not all speak the same language. We may not have ever been to India. But we all have Parle-G. The Parle Gluco company was founded in 1929 near Mumbai by Mohanlal Chauhan. Chauhan was inspired by the Swadeshi movement, which advocated for a boycott of British goods and a revival of Indian-made ones as part of the Indian independence movement. British biscuits were expensive, and after a few years of making candy, Parle Gluco expanded to making their biscuits as an affordable alternative to British biscuits.

“I feel like it was just always inexplicably in the house,” recalls Canadian writer Scaachi Koul. “That creepy baby on the packaging was always staring back at me in the pantry and I was never entirely sure if it was supposed to be a digestive for toddlers or if it was a tea cookie or what. But yes, I ate them all the time.” Koul was very aware that they were strictly an Indian household item, since her white friends never had them. “It was one of those Indian cultural things—is there a word like ‘Americana’ for Indian items?—that I found very charming,” says Beejoli Shah, a writer who grew up in a heavily Indian area of Los Angeles. “Parle-G was one of those things, like owning tons of pirated Bollywood item number DVD collections, that every Indian-American first-generation kid had in their home.”

The biscuits are enough of an Indian kitchen staple that home cooks and restaurants have begun experimenting with the nostalgic power of Parle-G in recipes. Their brittle crumbs can be rolled into the crust of a pie, baked into a cake, and used as the base for gulab jamun. Los Angeles restaurant Badmaash uses them for ice cream sandwiches. Recipes on the Parle-G website turn the biscuits into tiramisu, panna cotta, and milkshakes. “Parle-G was something we had in the house all the time. Actually, it was the only cookie my parents kept in the house,” says chefs Hetal Vasavada, who grew up in an Indian household in New Jersey. She figured if other chefs used inspirations from childhood in their cooking, so could she. “I saw people like Christina Tosi taking childhood flavors like birthday and funfetti cake and using them in fun, and sometimes sophisticated, desserts. I felt like I could do the same.” Except Vasavada’s childhood flavor is Parle-G, which she’s transformed into Parle-G cookie butter and a chai cheesecake on her blog, Milk & Cardamom.

Despite being allegedly the most popular biscuit in the world, Parle-G has yet to catch on in non-Indian households, likely because they’re hard to find in grocery stores that don’t cater to Indians (and because, Vasavada theorizes, “gluco-biscuit” sounds sort of medicinal). But for Indians, wherever they pop up, they become an evocative reminder of a shared culture. “My sister and her husband also had mini Parle-G snack packs as part of their wedding gift bags, which I thought was inordinately clever,” says Shah. “If you’re not Indian, then great, some cookies. But if you are, you just get it.”

“Cultural pride” assumes uniformity, but it’s hard to feel something like that when there is no such thing, and never was. There are as many Indian-American experiences as there are Indian-Americans, and it would serve everyone better to remember that. But there’s something comforting about finding those commonalities, the reminders that even though I don’t speak Hindi or didn’t grow up eating much Indian food, I still have this. I still have Parle-G. I belong.