Get a free recipe
Subscribe
We Love Pandan
By: Tatiana Bautista 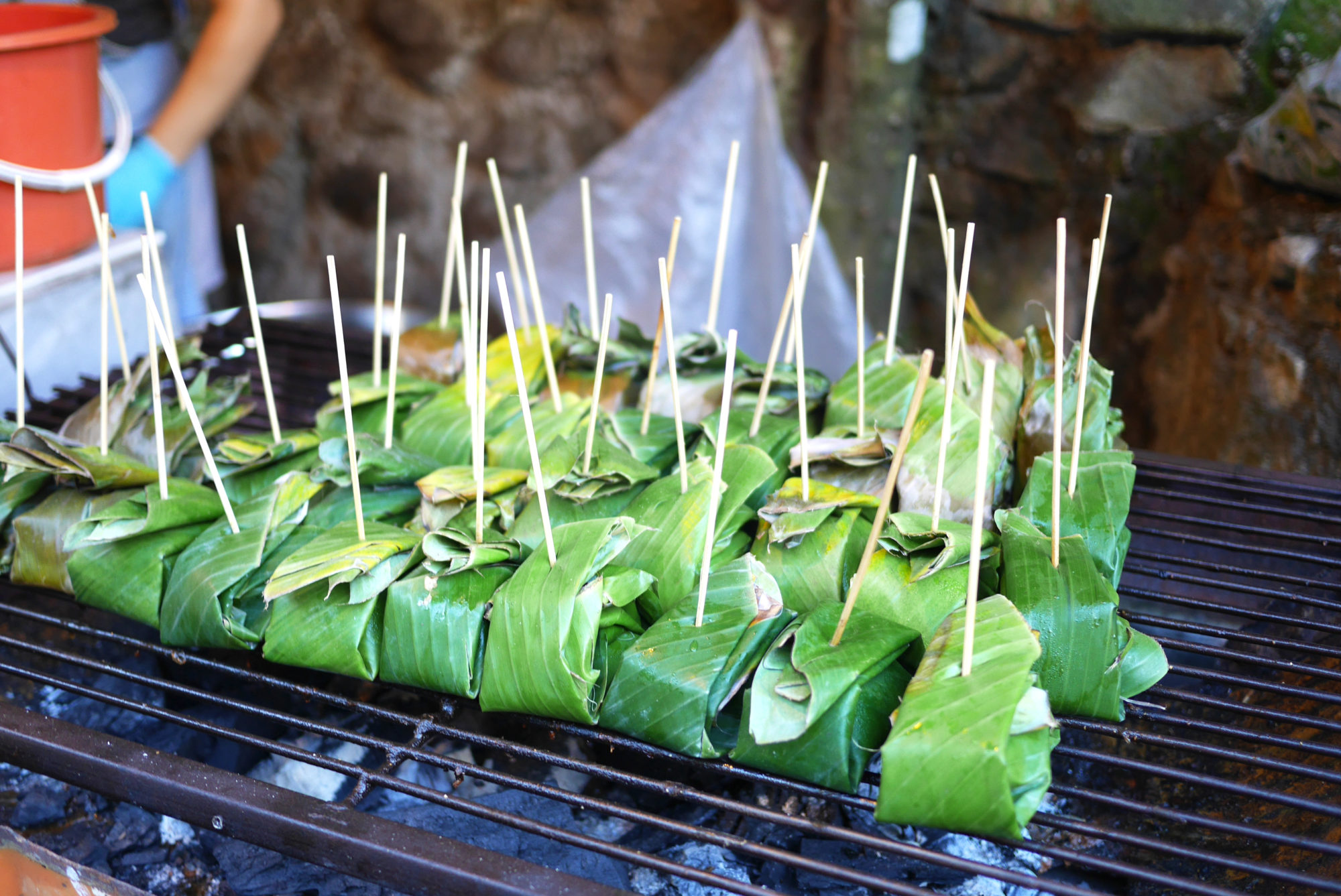 Pandan’s unique tropical flavor lends itself well to coconut milk-based desserts—especially when there’s toasty bread to dip into it.

When you think of custard, the usual pale butter-toned filling for éclairs or pies probably comes to mind. But looking away from Western-centric sweets, and to Southeast Asia rather, flavored custard starts to look a little different—more like the neon green slime at the Nickelodeon Kids’ Choice Awards to be exact. With a little help from pandan leaves (okay, and obviously food coloring), sangkaya bai toey is the pinnacle of custardy desserts.

Poured into a small ramekin-sized bowl or plastic cup, this popular Thai snack is served with steamed cubes of white bread or freshly fried cruller sticks on the side—ideal carb-based vessels meant for dipping into the smooth, silky custard. The relative plainness of the bread allows pandan’s herbal sweetness to shine through, soliciting double-dips until the custard bowl is empty. Kueh dadar (a pandan flavored crepe) and kueh salat (a pandan -coconut custard on top of a layer of sticky rice) are popular street snacks in Singapore, Malaysia, and Indonesia

But pandan is hardly a one-purpose ingredient. Across Southeast Asia, pandan-flavored treats stand front and center at street market stalls with their unmistakable highlighter hue. Broken down from its leaf form and into extract, pandan finds its way into the batter of spongy chiffon cakes, staining chunks of gelatin in buko pandan (a Filipino dessert salad with fresh coconut meat and condensed milk), and as the foundation of a cheese-stuffed martabak manis, a sweet folded pancake common in Indonesia.

The tropical leaf has been characterized as the vanilla of Southeast Asia, but the two are only similar in their pervasiveness as dessert ingredients—not so much in how they actually taste. When trying to describe an ingredient, we often try to simplify and contextualize it by comparing it to familiar foods, but pandan’s flavor profile is wholly unique. Fresh leaves embody an herbaceous aroma that’s slightly grassy, and are pleasantly fragrant without being harshly cloying. All over Southeast Asia, it is most commonly infused with coconut milk to create all types of bite-sized rice cakes, chewy jellies for shaved ice, and spreads, amping up those delicate notes with a staunchly tropical taste. Just like the street market stall khao yam I ate on a weekly basis and coconut milk-laden seafood curries I frequently indulged in when traveling the southern islands of Thailand, I longed to make my own version of sangkaya bai toey once I returned home. Unfortunately, fresh pandan leaves are pretty hard to come by in the States, unless you own a house plant of it, but I’ve found that most Asian grocers stock them in the frozen section. And if not, a miniature nip-sized bottle of pandan extract from a more specialized Southeast Asian grocery store (or simply, Amazon) is the next best thing.

At first, I took a shortcut and tried one of those “just add hot water” instant mixes only to be disappointed—it was sickly sweet and the ingredients didn’t even list any form of pandan. After tracking down a package of frozen pandan leaves at my local Chinese supermarket, the recipes I had researched didn’t seem too daunting either. It was just a matter of blending and straining the pandan, then mixing some yolks, sugar, and coconut milk over heat.

The result was a near-perfect replica of what I had in Thailand, albeit with a coloring that was closer to a muted matcha-like tint instead of the electrifying lime green I was used to. Slightly tweaking the bread for dipping, I chose to swap out the steamed white bread for toasted Japanese milk bread. Quickly broiled with a bit of butter and sugar, the caramelized top of fluffy milk bread was the perfect foil to the creamy custard. Nearly burning my hand on the freshly toasted bread, I dipped the sugar-sprinkled morsel into a pool of gooey custard. It was even better than I remembered.

Sangkaya bai toey, a popular Thai street snack, is both a luscious dessert and easy finger food. The pandan and coconut milk come together to create a wonderfully fragrant custard, while the slightly less traditional toasted Japanese milk bread cubes make for a perfect dipping vessel. If you don’t have access to fresh pandan leaves, you can find frozen ones at an Asian grocery store.