Get a free recipe
Subscribe
Ottolenghi Wants You to Put Za’atar on Whatever You Want
By: The TASTE Editors Illustration: Maria Hergueta 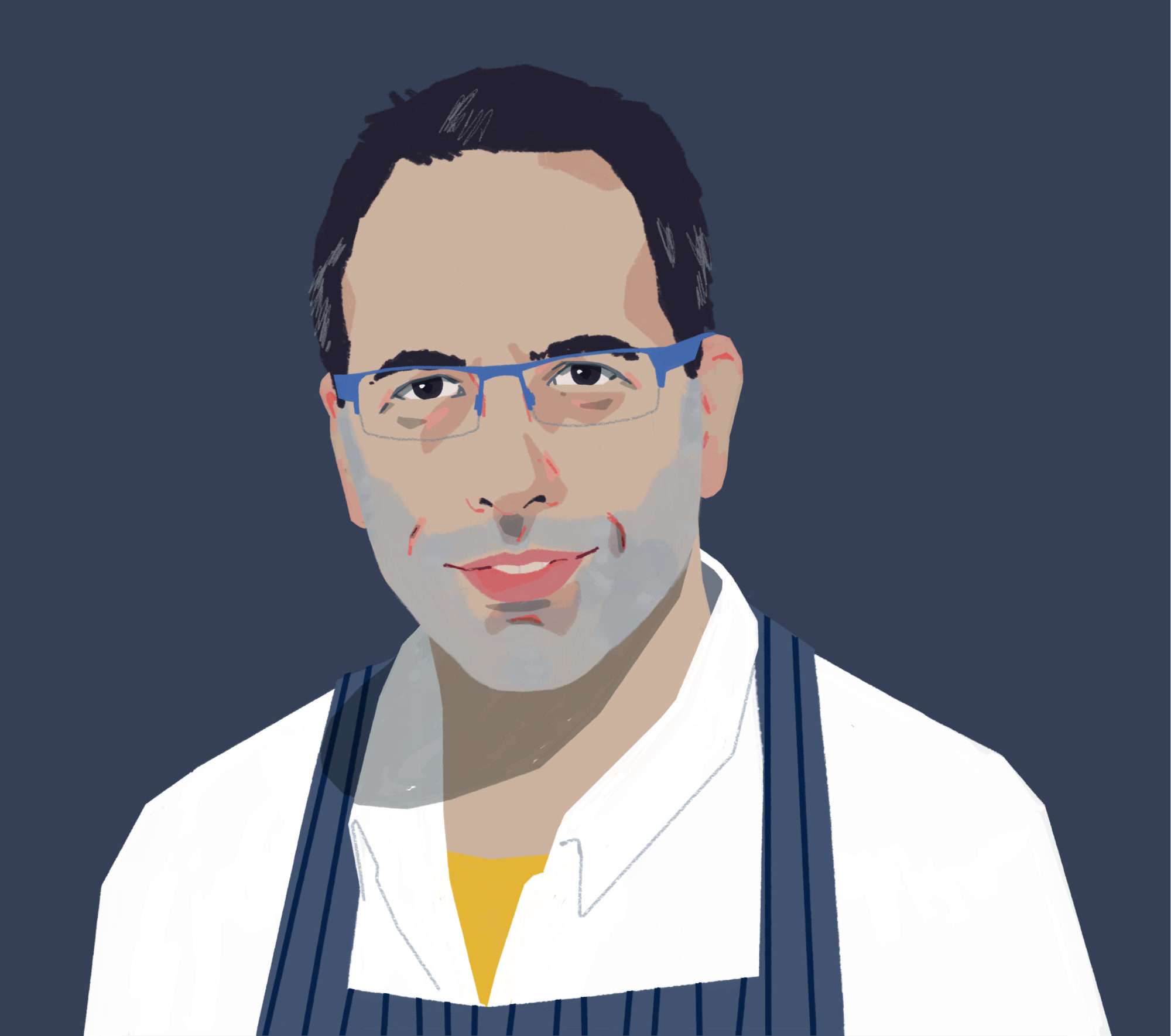 TASTE editors spoke with Yotam Ottolenghi about the legacy of his book Jerusalem and what it feels like to have been so many home cooks’ gateway to the city’s food.

A little more than five years ago, Yotam Ottolenghi and Sami Tamimi published Jerusalem—a look at the complicated city through the lens of food. The book became a runaway best seller and changed the way Americans thought about Middle Eastern ingredients and cooking. Suddenly za’atar and tahini could be found in suburban pantries, and home cooks were piling roasted eggplant onto beds of creamy labne.

The two authors were born in Jerusalem in the same year but grew up on two different sides of the city—Ottolenghi on the Jewish side of town and Tamimi on the Arab side. They sought to bring these viewpoints together and to tell the story of the food in situ, complete with all of the difficult context. As Ottolenghi tells us, “There’s some massive dilemmas—political, cultural, moral. And we touched on them while we were talking about food.”

The editors of TASTE sat down with Ottolenghi to look back on the book’s legacy and how it has changed the way American and British home cooks draw inspiration from Israeli food.

The introduction to Jerusalem was some of the greatest writing ever about the history, geopolitics, and food of Israel—all in one. Did you work hard on that introduction?
Yeah. The whole introduction and then the introductions to the recipes is something we gave a lot of thought to. Because we also knew we were going to hit on very controversial issues. And people would read it and draw certain conclusions and be hyperalert to what we were saying.

Do you feel after you published it, some of the recipe headnotes should have, or could have, been updated, given the wide reach of this text, and the people who are outpouring love, but also outpouring questions? Criticisms?
I have, yeah. I look back at it now and think, Oh, this could use an update, in some ways—the situation just keeps on deteriorating. Which is a tragic thing. So I don’t know what we would have done about it, but we probably would have written it differently today than we would have five years ago. Even though five, six years ago or seven years ago, when we were writing the book, it wasn’t a great time, either.

“The Israeli cuisine, or Israeli culinary culture, is really flourishing at the moment. There’s a lot of creativity going on, a lot of innovation.”

When you go back now, are there still new dishes or flavors that you’re learning about, even after having grown up there?
The Israeli cuisine, or Israeli culinary culture, is really flourishing at the moment. There’s a lot of creativity going on, a lot of innovation. So I do go, and I have young kids now, so I used to go out all the time, but now with very little kids, it’s more difficult to go places and eat. It’s more like you want to just survive the day [laughing]. So I’m less than aware of what’s going on, and when I go to a restaurant it’s quite rare now, but I keep myself informed through other means, like by reading.

How do you tackle the difference between Tel Aviv and Jerusalem as food cities?
I think it used to be more clear-cut like five, ten years ago. Tel Aviv was where all the kind of like experimental—looking forward, looking outward, looking to Europe, and to the rest of the world—things were happening. There were not many kosher restaurants. The whole outlook was very much to the outside of the world. Restaurants in Jerusalem were much more looking backward, looking inward.

Za’atar is really beautiful, and you can use it in many things, but do you feel there’s a potential overuse of za’atar in the home kitchen?
Well, it’s a seasoning. Every region of the world has its own seasoning, so when we go into restaurants we have salt and pepper—that’s the Western seasoning. And we use that. When you go to Thailand, you have fish sauce. When you go to Morocco, you’ve got cumin and salt. You don’t have pepper. So these seasonings are kind of arbitrary, and every country has that kind of set of flavors that kind of color the whole palate a particular color. And I think you could use za’atar in quite a lot of contexts. But my worry is that what you get in your potato chips wherever you go is not really za’atar. It’s just some dried thyme and sesame seeds that someone put as za’atar. Because when I go to shops and see za’atar in a jar, and I look at the ingredients, it says thyme, salt, sesame. That’s not za’atar. Za’atar is an herb. It does have some affinities with thyme and marjoram, but it’s really not them. It’s a particular thing. And when you go to Palestine and Israel and try those things, you’ll really get an idea of what it is, and it’s a bit different.

So it’s considered a blend in the United States, but in Israel it’s an herb. It’s a singular thing?
It’s an herb. So where the confusion starts is that it’s two things. It’s the herb that grows, and then you can pick za’atar like you can pick any herb or any flower in the wild. But it’s also the herb mix, the blend—where you take the dried herb, za’atar, and mix it with sumac and salt and sesame seeds. And you sprinkle it over things. So that’s what is more worrying to me—that you’re not getting za’atar, rather than you’re using za’atar in the wrong context. Because I think there’s nothing wrong with sprinkling some za’atar over your pizza if you want to, because it’s nice. Just make sure you get the right thing!