Get a free recipe
Subscribe
One Bottle of Fish Sauce Is Not Enough
By: Andrea Nguyen 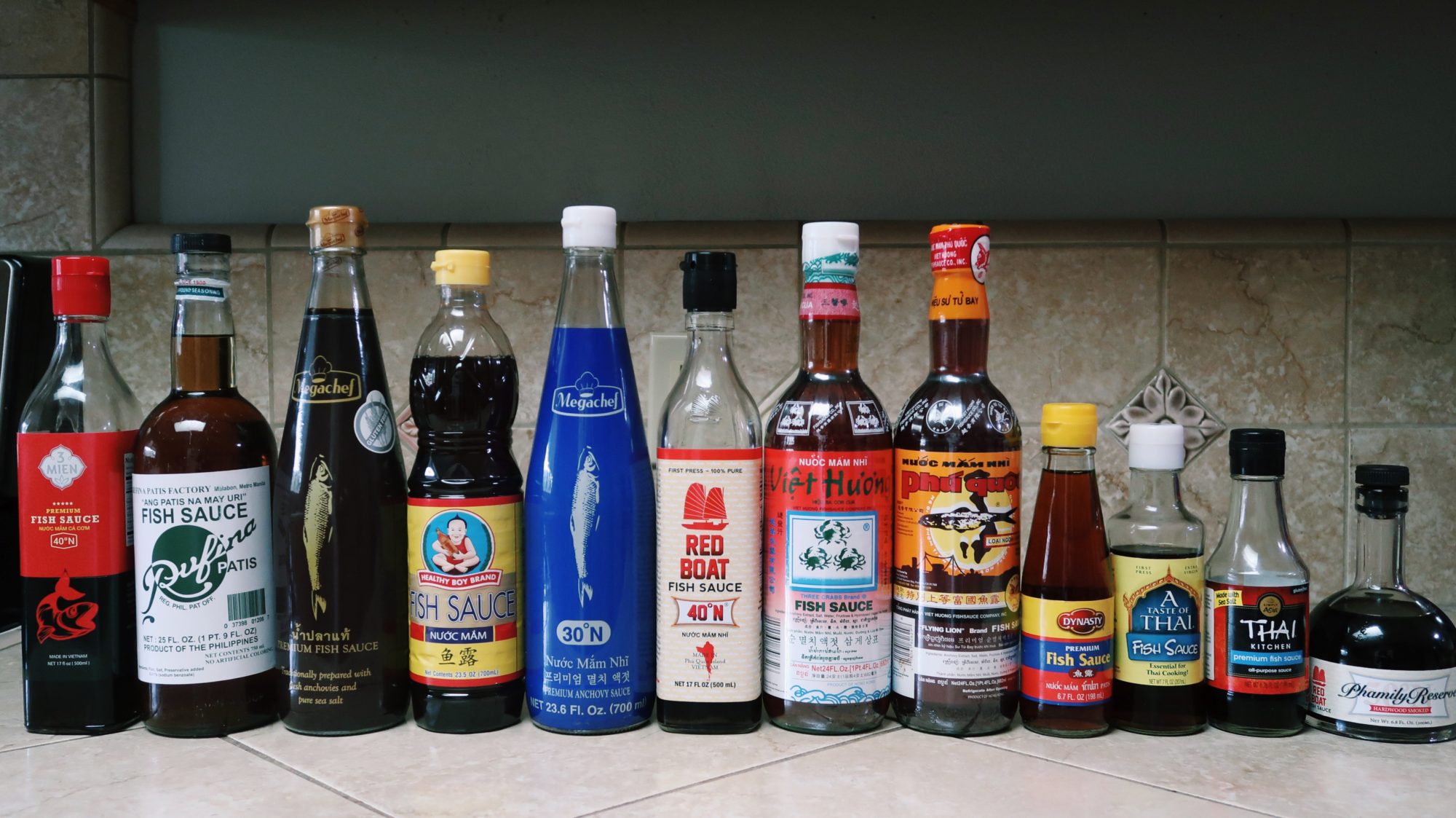 When seafood is slowly fermented with salt, the result is a briny, savory blast of umami that can transform dishes and inspire lifelong love affairs.

Open my cupboard, peruse my pantry, and inspect my fridge and you’ll count at least a dozen different bottles of fish sauce. They’re all testaments to the long affair I’ve had with the flavorful condiment that’s made from fermenting seafood and salt until it breaks down into a fragrant, inky liquid.

Fish sauce, called nuoc mam in Vietnamese, is part of my culinary DNA—and my family life is peppered with great fish sauce stories. One of the most memorable took place in the early 1960s, when my dad and uncle served as the governing military officials of two places renowned for fish sauce: Phan Thiet and Phu Quoc island. As my uncle once joked, “Your father and I protected one of Vietnam’s most precious things.”

After Dad retired from the military, he tried making a fish sauce concentrate that soldiers could dilute in the field. “If you’re patrolling in the jungle for a long time,” he recalled recently of his erstwhile experiments, “what do you want for a taste of home? Nuoc mam!” The idea didn’t catch on as a business, unfortunately.

When my family fled the 1975 Communist takeover of South Vietnam and resettled in San Clemente, California, mainstream American grocers didn’t carry fish sauce. Instead, we used soy sauce until we were able to buy a used Mercury Comet to make the three-hour round-trip drive to Los Angeles’s Chinatown to stock up. With fish sauce in hand, we felt more grounded, like we could be Vietnamese in America.

An adoration of nuoc mam led to my first cookbook’s working title, Pass the Fish Sauce. Alas, America wasn’t ready for it in 2006, when fish sauce was still largely unfamiliar here. So I went with Into the Vietnamese Kitchen. Behind the scenes, though, I did my part to spread the gospel: In the cooking classes I taught, I did fish sauce tastings with cucumber slices to help people better understand and appreciate it.

My sixth cookbook, Vietnamese Food Any Day, was released this year, and boy, have things changed. Cooks in 2019 are more adventurous and intrepid. People who attend my classes readily sniff and sample fish sauce from tasting spoons. They’re curious about different brands and want to know how to choose the best and how to use it well.

Here are a few pointers to help you along the way. Thailand is the source of most of the fish sauces sold in the United States. Some of them are made in a so-called Vietnamese style that results in a subtle flavor that works well with the cuisine’s relatively mellow flavors, which I often describe as rolling hills. By comparison, the lusty, gutsy flavors of Thailand (think peaks and valleys) easily shine with bolder Thai-style fish sauce.

Filipino patis tends to be heavy-ish and lacking umami depth; it works well for Filipino food, but I’ve found it hard to deploy for Viet and Thai cooking.

In my own cooking, I mainly use Viet Huong’s Three Crabs, Red Boat, and Megachef (the blue-label bottle is easier to source in America). They’re made in the Viet style and are versatile; you can use them to finesse flavors across cuisines. I know without a doubt they’ll work for Viet food. When deploying nuoc mam for Thai dishes, I compensate for the more savory nam pla by initially using less sugar than a recipe calls for; if I don’t arrive at a solid Thai flavor profile, I’ll add more sugar. Nuoc mam is also fine for fermenting kimchi and seasoning Filipino sinigang.

Sweet-savory notes make many Asian dishes rock, but fish sauce that is on the sweeter side may jet Western dishes to Southeast Asia. When I want to amplify the umami depth of marinara sauce, Caesar salad, chili con carne, salsas, and posole, I’ll add dashes of fish sauce such as Red Boat’s, which is devoid of sweeteners. Buying and storing fish sauce
If you’re in a mainstream grocery store, like Kroger, Whole Foods, or Publix, or in an indie market, check the Asian food section for Red Boat, Three Crabs, Thai Taste, and Dynasty (this is likely Megachef in a private-label disguise). Commonly found Thai Kitchen is a bit flat-tasting but fine in a pinch.

Refrigerate fish sauce if you only use it occasionally or if the smell bothers you. Keep it in the cupboard if you employ it several times a week or more. Fish sauce starts out as a clear amber liquid when it’s first produced but can darken and look inky over time, becoming saltier, funkier, and more concentrated as the liquid evaporates. When that happens, just use a little less than usual.

Employing fish sauce like a master
Read the nutrition labels and check the sodium level, which may range between 1,200 and 1,800 milligrams of sodium per tablespoon, depending on the brand. To prevent fish sauce from overwhelming food with its funk, I often combine it with salt; the two impart different kinds of savoriness to foods. If your fish sauce doesn’t have a built-in sweetener and/or an umami booster, like hydrolyzed vegetable protein, you may need a little sugar (or maple syrup).

You can also try making canh, a broad category of Viet-style quick soups that are enjoyed at everyday meals. They’re typically prepared with water (not broth!) and rely on gently sautéed onion, fish sauce, and salt for foundational depth. Among my favorites is a versatile gingery greens and shrimp soup, which is great for dinner or lunch.

I often add fish sauce to oyster sauce to enhance the latter’s sweet, briny nature, which is supposed to come from actual oysters but often does not. For my take on shaking beef (thit bo luc lac), the meat is marinated with oyster sauce, nuoc mam, and soy sauce. Fish sauce plays a supporting role, but without it, the dish would lack gravitas.

You don’t have to rack up family anecdotes to appreciate nuoc mam. You just need to keep it on hand and use it often.

Lead photograph by Andrea Nguyen. Other photographs by Aubrie Pick.

My niece Paulina requested this savory-sweet comfort food from southern Vietnam, a region where cooks use coconut milk and coconut water for a sunny array of dishes. I happily obliged because it’s delicious and involves a nifty technique—coconut water is reduced with other ingredients until it caramelizes a bit to create a lovely syrupy sauce. Enjoy tôm rim nước dừa with rice and a simple vegetable, like charred Brussels sprouts. Choose a large skillet or sauteuse pan with a light interior to easily monitor the color changes during cooking.

Many people assume that an unripe mango is not ready for prime time, but to me, it’s an opportunity to make gỏi xoài (mango salad). The traditional rendition includes cooked shrimp and fatty pork, but I’ve found that dropping the proteins not only makes the salad less fussy (read: faster to make) but also shifts the focus to the produce and highlights the tropical flavor combinations that are central to Vietnamese cooking. The decluttered version is lighter, brighter, and easily adapted for vegan diners.

At the store, choose a rock-hard, unripe mango (one with all or mostly green skin). Store it in the fridge to prevent ripening. When you’re ready to make the salad, peel it with a knife or vegetable peeler, removing all vestiges of the firm green skin. The remaining flesh sweetens slightly and softens in the salad. For the jicama, choose a small, blemish-free one (ideally no larger than a grapefruit); it will be sweeter and less starchy than older, bigger ones.

A typical component of an everyday Vietnamese meal, fragrant, wholesome, and fast soups like this one are called canh. Surprisingly, they’re typically made with water and rely on gently sautéed onion, salt, and fish sauce for foundational depth. What often defines canh is a ton of leafy greens, cooked in the pot to contribute their flavor and nutrients. A little protein is dropped in for savory flair. At the Viet table, canh is not just a first course—you can help yourself to it throughout a meal to refresh your palate. This nimble soup plays well with other dishes, but you can make a light meal of it, too. Just add warm bread and butter.

Instead of mustard greens, use another bold-flavored leaf, such as turnip greens or the radish tops left over from making pickles. Opt for spinach for a milder taste, or combine complementary greens, like kale and mustard.

As pictured, corkscrew-shaped shrimp result from halving them horizontally. Not fond of shrimp, or maybe it’s too expensive? Use a six-ounce fish fillet, such as tilapia or rockfish. Cut the fillet into bite-size pieces to add to the soup. 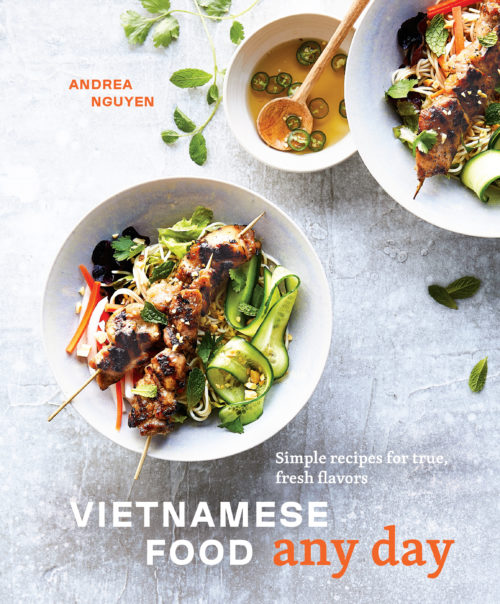