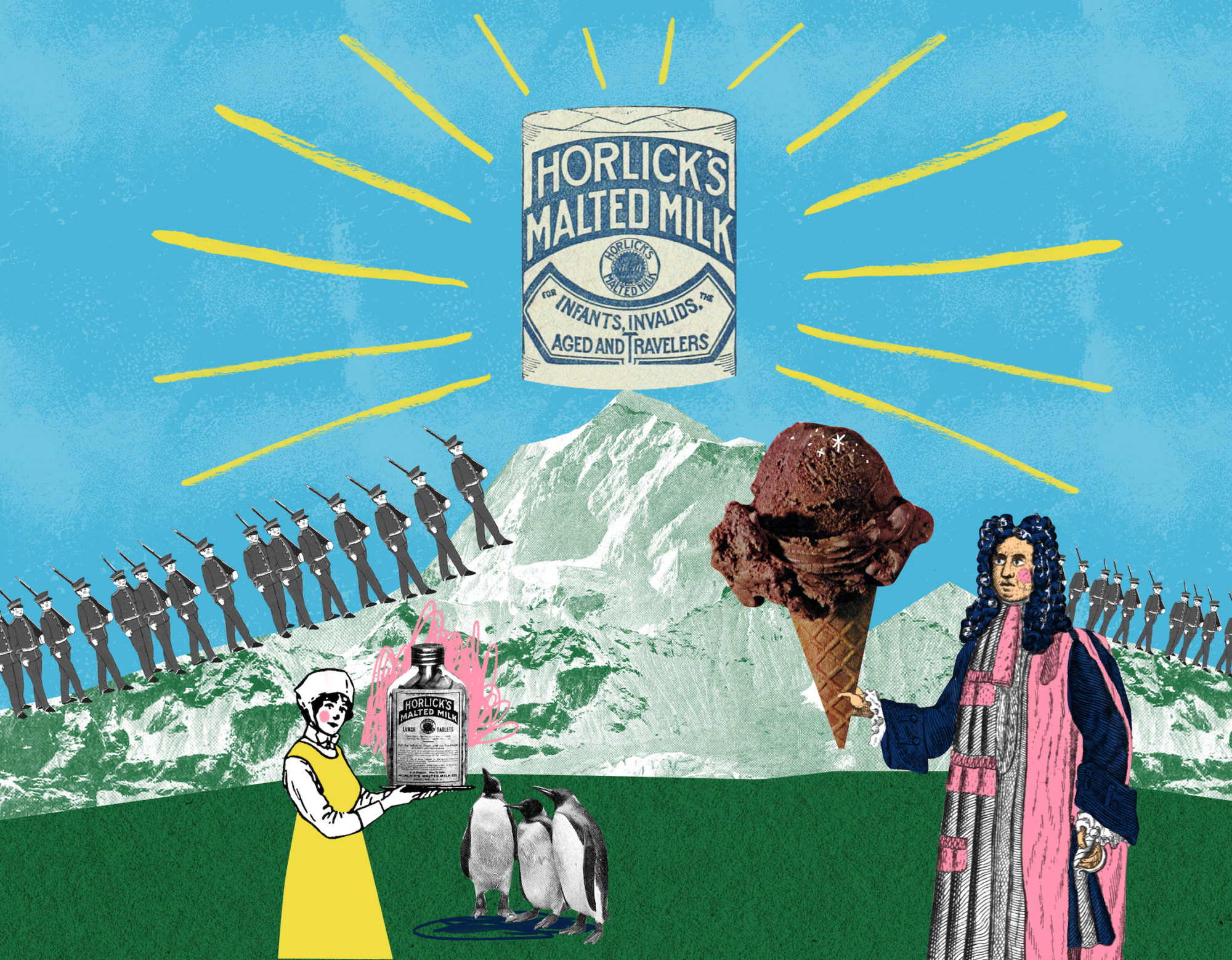 Malted milk powder may have turned into a nostalgic dessert flavoring, but it all started out as a way to feed babies and explorers.

Ladies and gentleman, boys and girls, prepare yourself to be regaled with one of the most fantastic stories in industrial food products! You’ll hear about ice cream, world wars, slums, and disease! There are appearances by British nobility, captivating geological wonders, freaking penguins (probably!). Hold onto your hats, folks. We’re delving into the thrilling world of malted milk powder, and that movie-theater box of Whoppers has a seedy backstory.

Our story begins almost 200 years ago in the Forest of Dean, where James Horlick was born. Seeking more excitement than the English countryside could offer, he hightailed it to London, where, as we have learned from the movies, most people were criminals and/or prostitutes and everything gave you tuberculosis (especially prostitutes). James became a homeopathic chemist at a company producing a newfangled product called infant formula, which made it possible for women to work 14-hour days in fish canneries without having to take breaks to nurse their annoying babies.

It had a remarkable impact: While most homeopathic products of the day were little more than packaged lies, early infant formulas were genuine nutritional supplements that produced actual results. They provided vitamins and minerals via wheat bran, bicarbonate of potassium, and the magic ingredient: ground malted barley. Malting is the process of soaking a dried grain until it sprouts, unleashing its hidden nutritional superpowers and converting carbs into simple sugars, which helps create plump babies that are better equipped to fight tuberculosis, typhoid, or any of the other diseases that happened to be sweeping through London that week.

Seeing a major opportunity, Horlick developed his own magical baby formula yet struggled to find investors to back his company. He and his brother William decided to try their luck in America. They opened shop in Chicago and found success quickly; doctors across the country began telling patients to add a scoop of “Horlick’s Food” to a glass of milk to create a nutritional super-beverage that was sure to keep them in tip-top health.

Horlick quickly realized that the unpasteurized milk he was using in the beverage was a breeding ground for tuberculosis. It took nearly a decade of tinkering to find the solution, but in 1882, he did it. By mixing the wheat and malted barley with milk before drying, he was able to create a water-soluble powder that was completely sterile. He called it “malted milk,” and it changed everything.

A Horlick’s advertisement from 1849 (image from The Independent, via Flickr Creative Commons)

Eventually, Horlick’s Malted Milk was found in every cupboard in America, and soon James had his comeuppance against all those stupid British financiers who refused to back his vision. He headed back to England to open an office that would import millions of dollars of his “Made in the USA” product, which was even more successful across the pond. While previous nutritional powders were consumed primarily by infants and invalids, malted milk was embraced by every demographic. It became indispensable in the slums of industrialized cities, providing much-needed nutrients like calcium and phosphorus to the paltry diets of the impoverished. The British government added Horlick’s to its military rations, keeping soldiers satiated in the trenches of World War I.

It became the official drink of the Heroic Age of Exploration, finding its way up to the top of Mount Everest to the darkest depths of the Amazon. Horlick enjoyed his symbolic role in these adventures and used his fortune to bankroll the nail-biting expeditions of many legendary explorers. Had it not been for malted milk, Roald Amundsen would never have been able to afford the first trip to the South Pole, and emperor penguins would never have learned about the existence of Norwegians.

Malted milk made James Horlick one of the most important men in the world. King George V brought him into the British aristocracy by making him a baron; King Haakon knighted him in Norway. The Horlick Mountains of Antarctica were named for him. Horlick’s remains a staple product in much of the world, especially in developing nations. Here in America, we’ve mostly forgotten about Horlick’s, save for that soda-fountain staple of waning popularity: malted milkshakes.

Shouldn’t we revisit malted milk? It adds a slight nutritional bonus to any dessert, making it easier to justify another piece. It’s delicious enough to have won the adoration of hundreds of millions through the years. And it kinda saved the world a little bit. Make this crazy-easy chocolate malted pudding cake, and raise a glass of milk to James Horlick. He deserves it.

Pudding cakes are rich and decadent, yet so easy to make that anyone can make a great one regardless of skill level. The technique may seem odd, but you need to trust it: The haphazard sprinkling of additional ingredients on top of the batter will sink during baking, resulting in a fudgy pudding-like sauce beneath the finished cake.