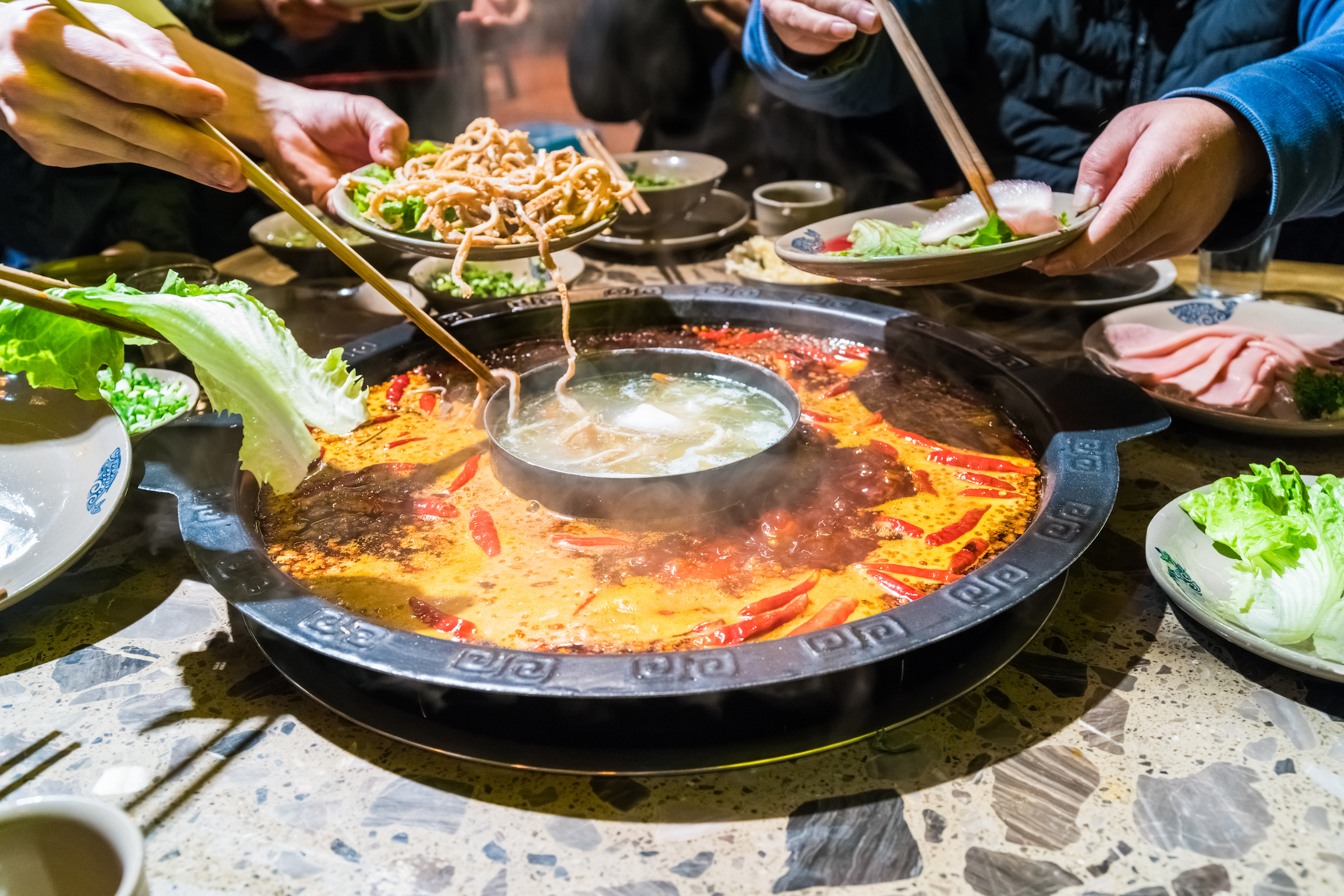 In Chengdu, Sichuan peppercorns are much more than just a numbingly spicy ingredient.

I was born in Chengdu in the Sichuan province of China, where babies are fed red-hot chile oil and Sichuan peppercorns from the moment they can handle solid food. (This is a city of 15 million people who rate their meals in Scovilles.) But I can’t say I was one of these homegrown spice hounds—as a toddler I moved to America, where my Sichuanese mother and Hunanese father, both from provinces famous for their spicy cuisine, made do with local jalapeños that provided the heat, though not the right kind. They wanted their tongues to numb, not burn.

I didn’t empathize with my parents’ turmoil because I didn’t know what I was missing out on. That is, until a return trip to Chengdu, where my relatives led us to one of the city’s ubiquitous hot pot restaurants. Locals sit around giant boiling cauldrons filled with frothing broths speckled with whole pieces of Sichuan peppercorn, their faces drenched with sweat and anticipation. There I learned about málà, which is the unique numbing heat that you can only find from this spice, also known as huā jiāo in Mandarin or xanthoxylum peperitum in Latin. In reality, Sichuan pepper is related more closely to lemons than to chile peppers—the numbness comes from a chemical compound called hydroxy alpha sanshool that is found in each seed.

Your first (and second, and third) time accidentally biting down on a Sichuan peppercorn is a shocking and psychologically unsettling experience. At first you don’t feel anything at all, so you keep crunching the husks in your mouth like they’re corn nuts—and then suddenly you can’t feel your tongue anymore. Your entire mouth is buzzing as if you stuck your wet tongue on a nine-volt battery. Drinking water doesn’t help to stop the tingling sensation; as a matter of fact, it only spreads the numbness further down your throat. The only thing you can do is wait—or just eat more málà, which is what the good people of Sichuan do, slurping down their noodles and panting with open mouths.

Your pupils dilate, your heart starts beating faster, and everything else you eat after your tongue is coated with málà tastes slightly lighter in flavor, compelling you to eat more to get the flavor. Hot pot restaurants in Sichuan—most of which are without air conditioning—are especially crowded in the summer, since the cooling effect of the numbness cancels out the heat of the red-hot chile oil.

This little berry is native to Sichuan province, though you can find closely related varieties in Nepal, Bhutan, Tibet, and Thailand, where the pepper is also used in regional cooking. (This hardy pepper is one of few spices that can be grown in the mountainous Himalayan region.) According to my relatives, however, the best crop is grown in Sichuan’s Hanyuan County, located to the southwest of Chengdu—a four-hour drive into the mountains. Here, locals credit the high altitude and cool nights for cultivating the most fragrant, flavorful peppercorns. Sichuanese cuisine is so folkloric, in fact, that the women of the province have developed a reputation as làmèi, or “spicy sisters,” in China. (For my fellow ’90s-pop enthusiasts, it’s also what the Spice Girls are called in Mandarin.)

“Did you know that Sichuan women are the most popular in China?” my Sichuanese uncle once told me when I was a teen. Purportedly, the fresh mountain air—Sichuan is also home to the giant panda—and the year-round overcast weather, combined with the sauna-like effects of eating spicy food in crowded, AC-free rooms, leads one to develop a clear, sun damage–free complexion. When my uncle explained this to me, I looked at my teenage hormonal acne in the mirror and wondered if the cure wasn’t a lifetime of Accutane but a lifetime of Sichuan peppercorns.

Sichuan peppercorns’ cultural relevance in China extends beyond skin care, though. It is mentioned in the Book of Songs, the oldest existing collection of Chinese poetry, with 305 works dating as far back as the 11th century B.C., where the seeds were a metaphor for fertility. The walls of the dwellings of Han Dynasty emperors’ concubines were made with plaster mixed with ground peppercorn to induce the production of heirs. It has been tossed over the heads of brides and grooms to ensure passionate lovemaking in the near future. And because it is toxic when ingested in excessively large amounts, Sichuan peppercorns have been mentioned as a method of forced suicide in several ancient tomes. Nowadays, you can buy Sichuan peppercorns online, at Asian grocery stores, or even at Whole Foods Market. (Until 2004, the United States government banned imports of Sichuan peppercorns due to fears that it would spread a citrus canker, a disease of lesions on citrus fruits and trees, across Florida and California. The rule was loosely enforced, however, and you could find it if you were lucky enough to live near a well-stocked Asian supermarket. My parents, for the first few years in America, did not.)

One of the most famous dishes that uses Sichuan peppercorns is dan dan noodles—a traditional Chengdu street snack that my mother still craves from her childhood. About a decade ago back in Chengdu, my aunt brought my mother and me to a tourist-filled market full of street-snack vendors.

“How was it?” my aunt asked my mother after she had a bowl from a stall. “It’s not as good as I remember from my childhood,” my mother responded, her voice tinged with disappointment that either the quality had deteriorated or that these noodles weren’t ever more than a quick, cheap meal in the first place. But it’s so much more than the taste when it comes to Sichuan peppercorns—it’s the cooling relief of a numb tongue and a wet, sweaty face on a hot, humid day. Málà is a sensation that one never forgets, even after spending 25 years an ocean away.

Traditional dan dan noodles are made with hand-pulled noodles, but in this version (adapted from a Fuchsia Dunlop recipe) udon noodles are a much faster alternative that provide a similar chewy texture and surface area for sopping up the thick sauce. Chinese restaurants in America tend to make them with peanut butter, which is not traditional at all, but provides a sweet and comforting balance to the chile oil and peppercorn—especially if this is your first time with málà. I’ve added a few variations of my own, including turmeric (which is similar to ginger) and avocado oil (a healthier alternative to the canola oil used traditionally).