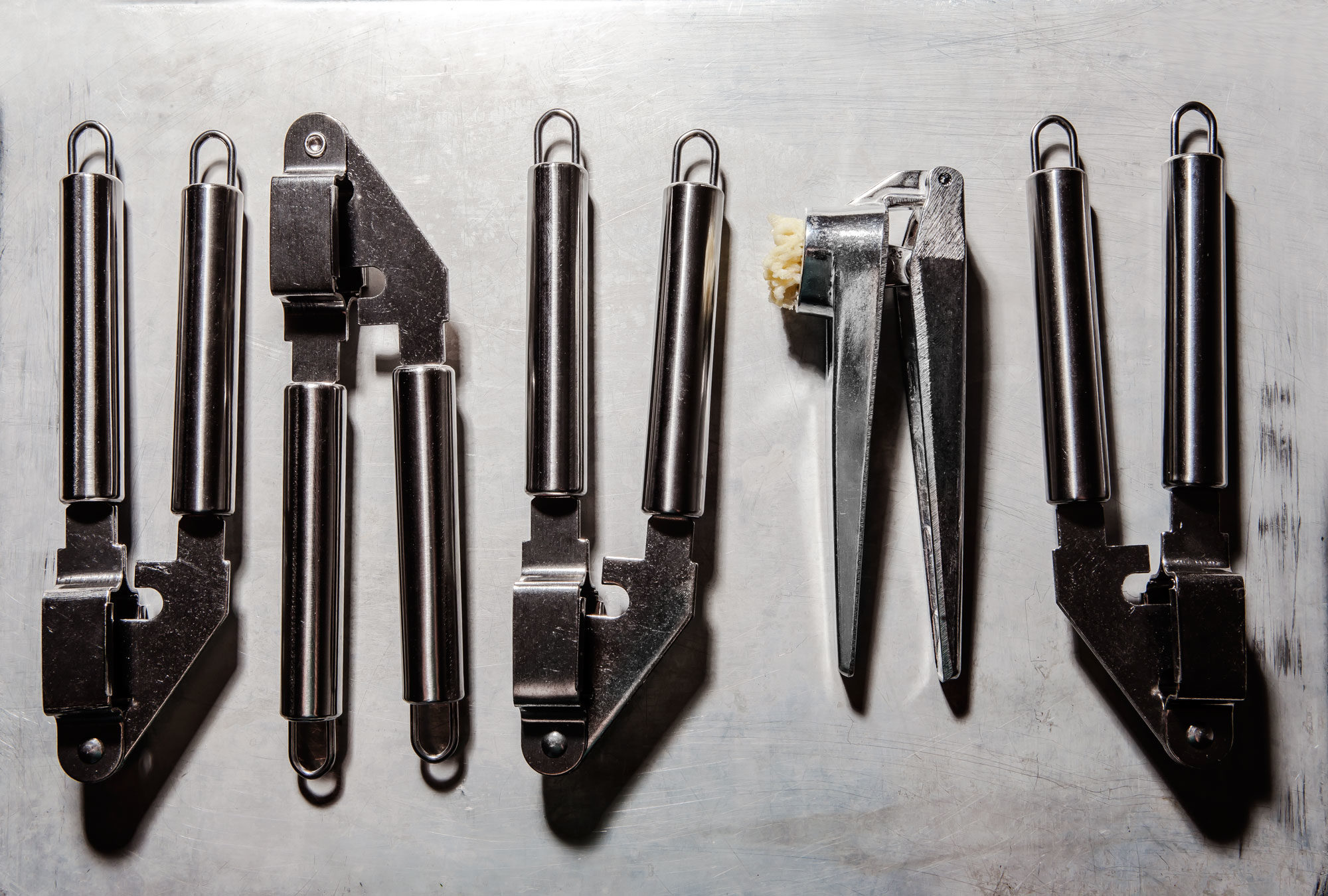 Chefs claim that it makes garlic taste bad, and home cooks worry that it’s a cheap shortcut. But are either of them right?

It follows, then, that until a few days ago I did not own and had never used a garlic press. I came of culinary age at the height of the celebrity-chef era. I didn’t learn to cook from my parents or grandparents; I learned from television shows like Iron Chef America, No Reservations, and Top Chef, and while paging through cookbooks by David Chang, Donald Link, and Alice Waters. And for years as a book editor, I put books into the world that reiterated the same chef-y ideology—slow foods are the best foods; old-school is the only way. Gadgets and gizmos be damned.

Would Waters ever use a garlic press? No, of course not; she would tidily smash the garlic and then run through it with her perfectly sharp chef’s knife, which she probably bought at an impeccable kitchenware shop in one of the hill towns of the Luberon. Would Chang use a press? No, he has an army of kitchen minions whose sole purpose is to meticulously chop garlic with their CIA-honed knife skills.

I was genuinely surprised, then, when I read that Priya Krishna, author of Indian-ish, one of the most deservedly talked-about cookbooks of the year, said in an interview with Pineapple that the garlic press was her “most trusted kitchen tool.”

“I have a very specific opinion on this,” Krishna tells me. “I think the garlic press is indispensable. But the reason that the garlic press has gotten such a bad rap is because most of the garlic presses out there are really, really shitty. I grew up with my mom’s vintage Zyliss-brand garlic press, and it is the greatest ever.”

Conventional chef-y wisdom is that even high-quality garlic presses negatively affect the texture and flavor of the garlic. “Please treat your garlic with respect,” Anthony Bourdain writes in Kitchen Confidential. “Sliver it for pasta, like you saw in Goodfellas; don’t burn it. Smash it, with the flat of your knife blade if you like, but don’t put it through a press. I don’t know what that junk is that squeezes out the end of those things, but it ain’t garlic.”

First patented in the U.S. in the 1950s, the garlic press is a classic example of Space Age–era American ingenuity. Along with canned condensed soup and boxed cake mixes, it became an easy target for a certain generation of chefs and slow-foods evangelists, like Bourdain and the British food writer Elizabeth David, who refused to stock garlic presses in her London shop and wrote an essay in a 2016 book titled “Garlic Presses Are Utterly Useless.”

But when Bourdain calls the garlic press “an abomination,” or when Epicurious writes that it’s “the devil,” are they rejecting the appliance because it is genuinely nonfunctional or because it is a symbol of the type of convenience cooking we’ve been conditioned to hate? I start by asking Alex Raij, chef-owner of the New York restaurants Txikito, La Vara, and Saint Julivert, about her opinions on the subject. “I hate the garlic press!” she tells me (toeing the party line). But Raij has a more empirical rationale than Bourdain: “I think it bruises the garlic and makes it bitter, strong, and acrid. Plus, it’s often made of reactive metals I don’t like.”

Metals like copper, raw aluminum, and iron are considered “reactive.” Practically speaking, reactive cookware has a reputation for sometimes making food (especially very acidic or alkaline food) taste metallic. Most commercial garlic presses are made from reactive metals like aluminum but many of them have a nonstick coating.

Like Krishna, Deb Perelman of Smitten Kitchen is a garlic-press partisan. “I like the Zyliss one and have spent far more on absolutely terrible ones and learned my lesson,” she tells me. “Often these days, I’ll recommend simply finely grating a clove of garlic on a Microplane rasp, which is a far more multifunctional tool to keep around. But I don’t prefer it. I find that I get down to the last quarter of the clove and I have to decide how much of my fingers I wish to rasp along with it, while ending up with garlic juices permeating my fingernails, etc. A garlic press is quick, efficient, and doesn’t take up a lot of space.”

Now is when I sheepishly admit that in addition to never having touched a garlic press, I’d never grated garlic on a Microplane, either—I was 100 percent, no substitutions, a “smash and mince” girl. I started to wonder if I was not only a gadget snob, but also a Eurocentrist—was I biased towards classic French technique?

When I ask Leela Punyaratabandhu, author of Simple Thai Food and Bangkok, about how garlic is used in the Thai kitchen, she points out that “garlic is almost never used in isolation from other aromatics.” (A blend of cilantro root, black peppercorns, and garlic is a foundational ingredient in a lot of traditional Thai cooking.) Why press the garlic on its own when it can just be pulverized with everything else in one go, she suggests?

A few weeks ago, I bought my first garlic press, a $17 model from Oxo. To test it, I decided to make some sauces with raw garlic: a very basic salsa verde and a riff on a romanesco. At first I hated the press. I loaded it with three unpeeled cloves and was shocked that I had to use two hands and quite a bit of force to extrude the garlic. So the next time I peeled the cloves before loading up the press, muttering that it would have taken me the same amount of time to chop everything.

But I’ll be damned, the sauces were good—flavors balanced, notably but not oppressively garlicky, nice emulsification. That last part is what sold me: the salsa verde had a better texture than versions I’ve made with minced garlic; there were no garlic “floaters,” and the garlic flavor was more evenly distributed so there were no hypergarlicky bites.

A few days later, I made a quick frittata by sautéing some kale I tore by hand and pressing two cloves of garlic straight into the pan. No cutting board, no knife, just the press and a pan. It was super easy, but alas, way too garlicky (I can still taste the garlic on my breath). Was this the acridity Raij warned me of, or did I simply use too much? (“When you’re extruding through a garlic press, you’re not just extruding the garlic, you’re extruding the garlic juice, too,” Krishna warns. “When I mince garlic, I usually have to use double the amount of garlic to get the same amount of flavor.”)

I’m not here to tell you to drop everything and go buy a garlic press. I certainly don’t regret buying mine; it’s small, and I’m blessed with decent cabinet space. Maybe I’ll only use it for garlic toast and salsa verde; maybe it will work its way into my repertoire in more surprising ways. But here’s what I know for certain: The next time someone tells me about their favorite kitchen gadget, I’m going to check my own snobbery about it.

“There are so many things that we home cooks have just accepted as facts,” Krishna tells me. “As I was writing this cookbook, I watched my mom cook. She never read magazines like Bon Appétit or Food and Wine, and because she never learned any of those things, she is unbound by their rules. It’s been really freeing for me to be like, ‘OK, I don’t have to obsessively peel shit, garlic presses are great; I love pre-cut frozen vegetables; I use my microwave to cook rice.’ These are all things that we should be given permission to do, but somehow we’re not.”