Get a free recipe
Subscribe
Not All Hot Pots Are Created Equal
By: Jaime Chu Illustrations: Carolyn Figel 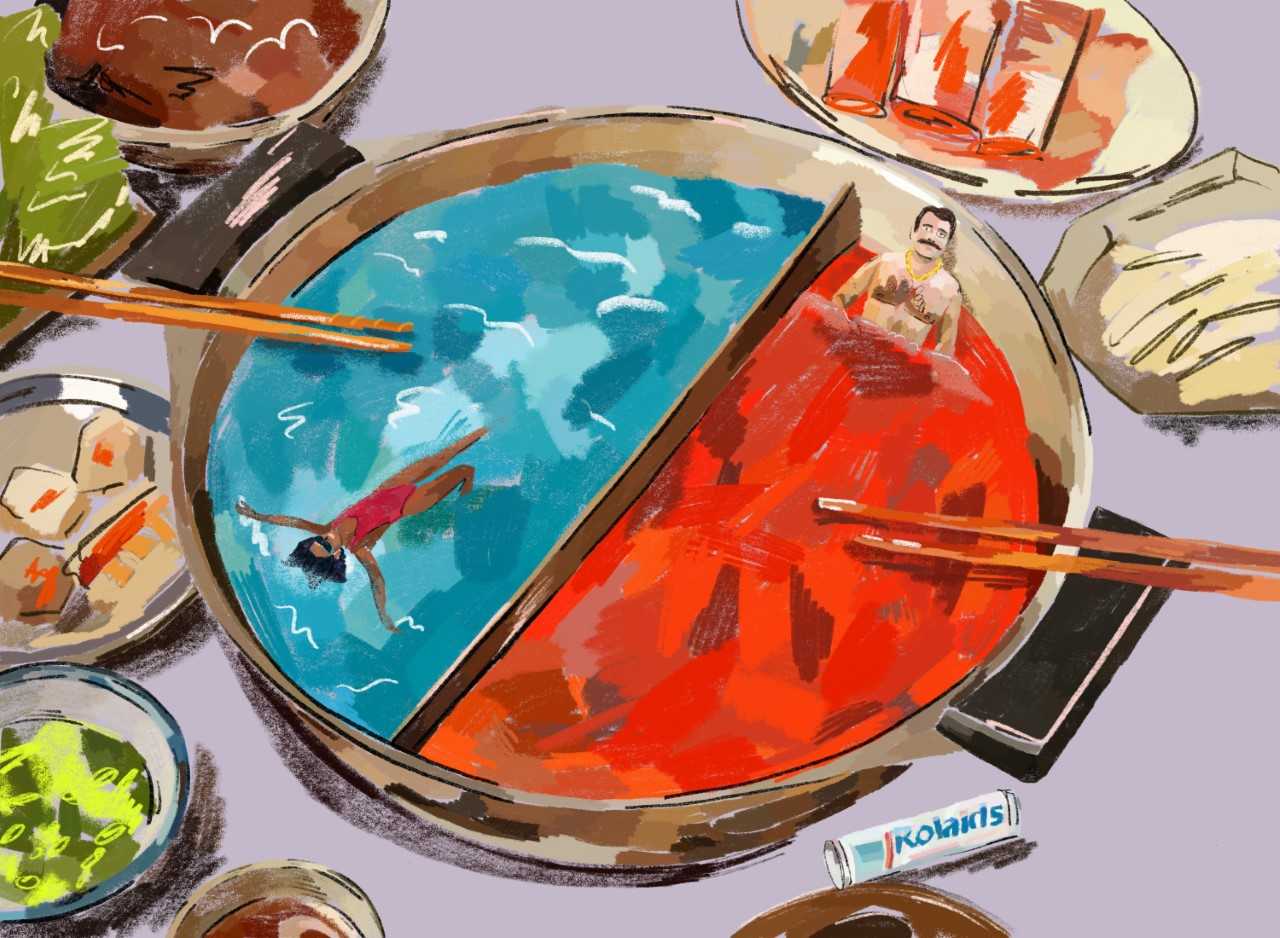 Hot pot doesn’t have to be a show of hubristic, athletic gluttony. Or maximalist flair. And maybe it’s best when made at home?

A friend once qualified an idealist as someone who is prone to expending a disproportionately large amount of effort in exchange for what might be ultimately minor but, in the moment, perfect outcome. Nothing betrays my idealism more than food; and nowhere is it more exemplary than in the chase after numb and spicy. Spicy food is an extreme sport for the palate, and so is the search for the perfect version of a dish—whether it is a family recipe rescued from memory, a trek based on hours of Internet research, or the hunt for an elusive ingredient in a grocery store abroad. But it is hard to tell where perfectionism ends and extremism starts. Perhaps, in reality, what I am looking for is the dish that defines perfection.

When living with beastly humidity—as I had growing up in Hong Kong—the fire in peppercorn and chile is not so much for literally keeping the body warm in the cold as for brightening the appetite, encouraging perspiration, and helping to regulate the body’s qi. This is why the Sichuan Basin in southwest China, at the mercy of its humid subtropical climate, is home to the holy grail of numb (“ma”) and spicy (“la”): mapo tofu, dan dan noodle, chile-fried chicken, beef tripe in chile oil, and the mother of all, mala hot pot.

Stubborn, masochistic, or idealistic, I follow one rule: closer to source, closer to god.

Six months ago, on a December day, I arrived in Chengdu after a 20-hour train ride from Beijing. It doesn’t take long in the city to notice the ubiquity of hot pot is more like a food group (“patisserie”, “salad”) than a meal type (“breakfast”, “lunch”, “snack”). There is always some version of mala soup available for any time of the day: “hot pot,” “spicy hot pot,” “skewers in hot pot,” “hot pot noodle.” But not all hot pots are created equal; the taxonomy gets confusing quickly once you realize “spicy hot pot” is a local way of saying single-serving hot pot. But regardless of form, the essence of hot pot is its base: the broth.

At the Carrefour market near my Airbnb, there were aisles and aisles dedicated to hot pot soup base alone. I was determined to bring back tokens of this “authentic local delicacy” to New York.

It took all but three seconds for an employee to corner me into yapping about souvenir candies and jerkies. I took my chance on the middle-aged gossipy-neighbor type I’d normally fend off to ask: “Which one is the people’s favorite?”

To my surprise, she chuckled: “The locals, of course, we all make our own at home.”

I had never felt more like an idiot. Of course. There is no hot pot like hot pot at home. A mala hot pot recipe is like the barbecue spice blend of the American South—family recipes are closely guarded secrets that no one will fully reveal without feeling like they have exposed some part of themselves.

Just as it is a disservice to reason that hot pot only belongs only to the winter, it speaks to a lack of imagination to think that it starts and stops at “throwing a bunch of stuff into boiling water and cooking as you eat.” Hot pot is simultaneously democratic, communal, and autocratic. With a buffet-style spread, there is a very low risk for trying something new. Everyone gets to help themselves to whatever they want—stirring the same pot amounts to a gesture of good faith no less than the G7 summit. And as a true crowd-pleaser, the yin-yang (or dual-sided) pot comes with a built-in or removable divider for having the broth two ways.

It wasn’t until I moved to Brooklyn in my early 20s and discovered a circuit of all-you-can-eat hot pot in Sunset Park with my roommate that I began to see hot pot’s maximalist flair lies not in volume, but in its magnanimity of spirit. It doesn’t have to be an elaborate holiday gathering for family and friends. It doesn’t have to warm you up on a cold day. And it doesn’t have to be a show of hubristic, athletic gluttony. At the comet tail of a winter afternoon good for nothing but brewing restlessness, all it takes to enliven us with a sense of purpose is taking a bus across town to try a new hot pot restaurant—campy and nostalgic while attending to a basic need for food and novelty. After all, why do we work so hard if not for the relief of reaching for things when we want them the most casually? And what is luxury if not the luxury of always being able to say “yes” to someone, to some things?

I thought about the lengths I have gone to surround myself with mala soup as I caught up to the sales lady in the Carrefour spice section. She went on about what goes into the hot pot at her home, but it was the verbal equivalent of a loose note that’s been doodled over in that one kitchen drawer with all the junk. I followed her lead and pulled green flower peppercorn, Pixian chile paste, and dried red chile into my cart—essentials local to Sichuan that later proved to make a difference by being fresher than their counterparts in American supermarkets. The rest is standard Chinese pantry spices that I figured I could fill in the blanks by experimenting with cooking videos and blogs back home in New York.

My blind faith in the sales lady’s endorsements must have inspired a conspirator’s generosity in her. Before she let me go, she said, most importantly, you have to soak the peppercorn in wine before cooking to help release the numbness. Once again, the science of it eluded me, as things—like cooking, like memory, like love—we pretend to have control over often do.

There is no correct answer on the Kinsey scale of numb and spicy. When it doubt, it is safer to err on the side of mild. The broth will evolve over the course of the meal as the spices seep and flavor deepens with each fixing that goes into the pot: slices of lamb, pork belly, eye of round, tofu, shrimp, beef tripe, leafy greens, potato or glass noodle, and as many kinds of mushrooms as you can find.

My mother was a crafty, frugal and health-obsessed nurse, so as a child, I never had a taste of the glossy, store-bought version of anything if she could help it. As the school year ended, my classmates would brag about the “privilege” of eating McDonald’s and Cup Noodles for a week straight because their kitchen had been packed away for their summer home moves, while in the same boat, there was nothing to stop my mom from feeding us vegetable from a hot plate. This is the broth my mom came up with for moving-season hot pot.