Get a free recipe
Subscribe
No Pin Bone Left Behind
By: Besha Rodell Photos: Rob Palmer 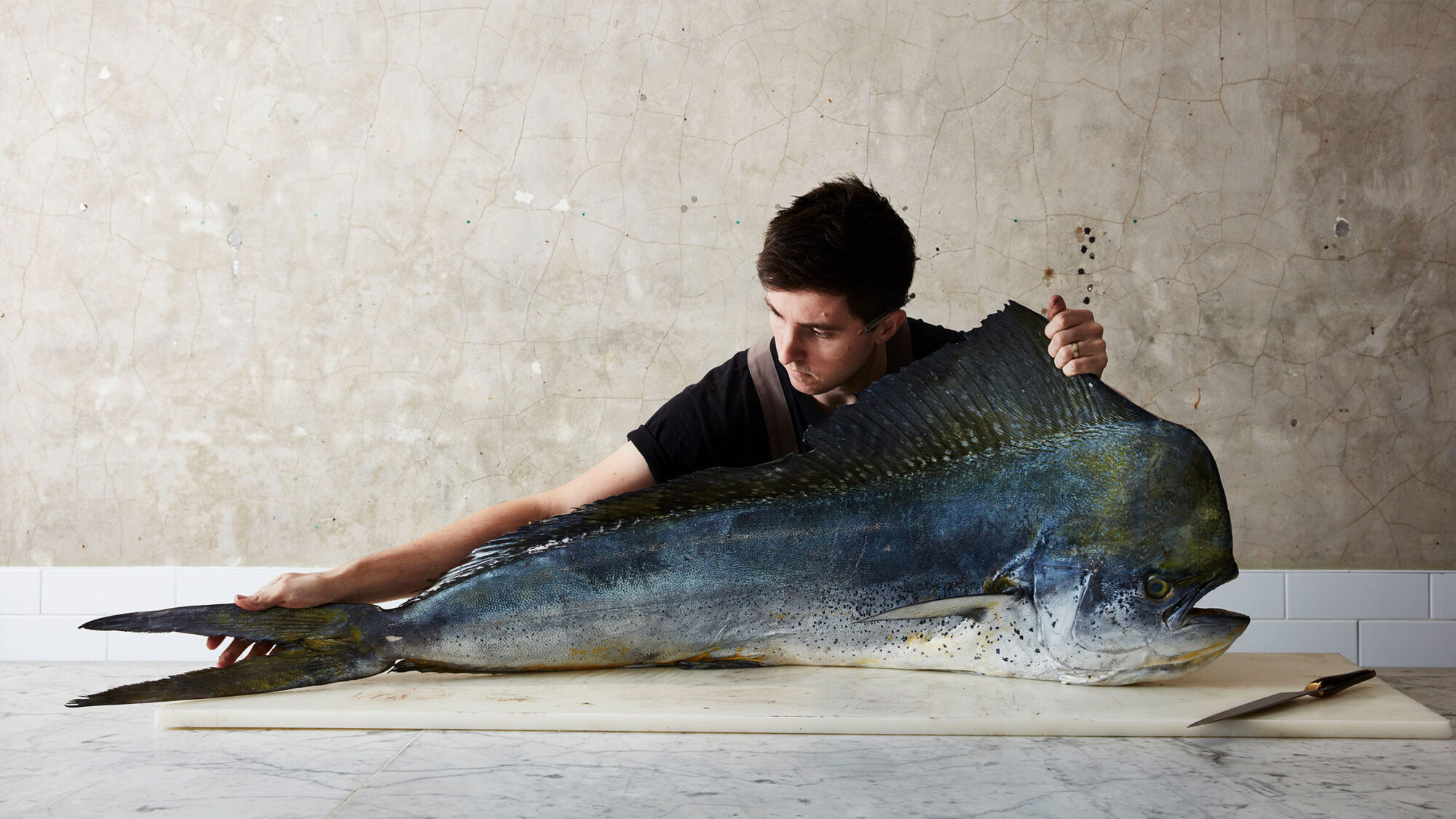 Chef and cookbook author Josh Niland wants you to rethink the way you buy, butcher, age, and eat fish—spine, spleen, and all.

In 2016, a 27-year-old chef named Josh Niland opened an unassuming 34-seat seafood restaurant in Sydney, Australia, called Saint Peter. Although the restaurant, owned by the chef, was a bit of an anomaly in inner Sydney and Niland was certainly young, there wasn’t much about Saint Peter that might suggest it would revolutionize the way Western cooks and diners think about fish.

A few years and many thousand Instagram followers later, Niland has become a pioneer in fish cookery, urging people to rethink the way we have processed, butchered, cooked, and thought about fish for centuries. At Saint Peter, fish eyeballs are turned into airy crackers, albacore is dry-aged to intensify flavor, and John Dory liver is piled on top of crumpets for Sunday brunch. Niland’s Instagram page became a source of inspiration for chefs around the world. Jamie Oliver has called him “one of the most impressive chefs of a generation; Nigella Lawson has called him a genius. His 2019 book, The Whole Fish Cookbook, proposes that we should be building relationships with fishermen and eating a wider variety of fish, that we could be using more of the fish that we do eat, and—perhaps most controversially—that fresh fish can be aged, much like meat. The book illustrates the process of fish butchery in granular detail, with crisp and detailed photos that give cuts of fish the same clinical beauty as vintage botanical charts. But Niland’s main premise—that the way fish has been processed, brought to market and sold for hundreds of years is inherently flawed—is a problem without an easy solution. He recently opened a retail store in Sydney, Fish Butchery, in an attempt to demonstrate what a new way of handling and selling fish can look like. I spoke to Niland about his vision for a fishy future that leaves no spines or spleens behind.

I have a theory that fish cookery fell out of style at a certain point because grill cooks had more of that aggressive chef-bro attitude, while cooking fish was traditionally a much more precise and delicate art form. Even bringing the word “butchery” into the conversation kind of gives what you’re doing more of that vibe. Can you talk about why you think fish cooking has been underrepresented in the food revolution of the last 20 years or so?

It’s expensive, it’s time-consuming, and it’s a really fragile product. Like you said, it’s seen as delicate, and the flavor profile lends itself more to aniseed and acid as opposed to wines and root vegetables and things like that. I gave Fish Butchery its name because the word “monger” denotes dealing and trading in a commodity—whether it’s cheese or fish, you’re pushing a product; that’s what that word means. Whereas the word “butcher” means to slaughter and prepare that animal in readiness to be sold. You’re bringing some craft to the process.

Fish has got an organic compound in it called triethylamine, and then when it dies it converts into triethylamine oxide. And then, through inconsistencies in temperature and adding moisture via washing, the triethylamine oxide converts to ammonia. Ammonia is what people are smelling when they talk about “fishy fish.”

One of the questions you spend a fair amount of time answering in the book is: Why don’t we cook more seafood at home? I know different people have different reasons, but what do you see as the biggest issue stopping people?

If you put a wet piece of fish into a hot pan in your kitchen, it’s going to spit fat everywhere, and all those volatile aromas are in that fat, spitting on your walls, and then your house will smell like fish for hours or days.

When you start identifying the problems people have: It stinks, it’s wet, it’s cold, there’s no one to talk to me about how to cook it, it’s bony, it’s scaly…. I empathize with that. It is all of those things. How do we make it better? The only way to make it better is to eliminate this washing of fish. It occurs to me that you’re dealing with a catch-22 here, because on the one hand, you want to encourage people to be thinking about fish differently and to be cooking more fish, and on the other hand, a lot of what you’re saying is that there isn’t really any fish available that is being treated the way you’d like it to be treated. Even in coastal cities, a good fishmonger can be hard to come by, let alone someone who is using these methods you’re suggesting. For the home cook—I mean, do I have to go out and catch my own fish?

I honestly think it comes down to communication. I know that chefs always deal with a more premium product and can ask suppliers for things to be treated a certain way. But the average customer can go to a market and notice that they may have a box of snapper in the corner that has just come in. Most people who work in fish markets, they start their day at two or three in the morning. And if you’ve got that kind of lifestyle, there’s a part of you that really cares about the product, that has passion. [You need] to have contact with those people, to kind of say, “What would you want to eat tonight?” And they’d probably tell you that the snapper behind them is the best because it’s just come in. You can say, “Can you scale it for me and gut it? But don’t put it under a tap.”

Is your book title, The Whole Fish Cookbook, an homage to Fergus Henderson’s The Whole Beast?

Yeah, I think it’s like naming a restaurant; a book title has got to be memorable and somewhat meaningful.

The Whole Fish Cookbook is indicative of the approach, and some of the photos you see in it are very much of the whole fish. I needed it to have connotations of “meat” in the title without saying it.

But similar to what Fergus did with meat…he managed to normalize bringing offal to supermarkets. Not singlehandedly, but certainly he was immensely important. He managed to make people think, “Wow, that’s really cool and interesting, and I’m going to get the pig ears the next time I’m in a place that serves them, because I’ve heard about Saint John.” If I could do half of what he did, then that would be amazing. The agenda with the book from the get-go was to suggest that the way we’ve been handling fish is flawed: the normalization of taking a fish out of the water, and then putting it back under water to process it, which immediately sets off this three-to-four-day window of fragility.

The current, and most efficient, way to process fish is to scale it with a big scraper and pull all the scales off, and then dip the fish into a pool of water or wash it off with a hose. Once you’ve done that, you cut the head off and pull the gut out, then that goes in the bin. Then a hose goes back in to clean it out. That model is basically global—that’s standardized throughout the world. It’s very efficient, and it gets product to market. We’re celebrating quantity over quality.

Do you think people should be butchering fish at home?

I’m trying to show the opportunity that a fish has rather than saying, “Everyone needs to buy a whole fish and do your own butchery at home.” I don’t want to belittle people, I don’t want to be pretentious, I don’t want to be that jerk who says, “You must eat fish throats instead of the center cuts of salmon.” I’m just saying: The throats exist. And here’s the method of cookery for how to use them and for it to be delicious. A good portion of your book is dedicated to the idea of aging fish, something that seems totally counterintuitive to many people. Can you explain what that does, and why you do it?

The process is to get the best possible fish that you can find, that’s had absolute minimum intervention—with no one packing ice directly on the fish or drenching it in water already—and you take the whole fish with head on, scales on, and guts in. And this is talking more commercially than domestically. Cutting the scales off rather than using a fish scaler, wiping it dry with a paper towel, and taking the organs out but discerning which organs can be used.

We then hang the fish, and as the skin dries, it forms a barrier and protects the flesh.

What we’ve noticed is that a few days in, it will taste so much different than day one, but for the better. And then day 15 will taste even better than day seven. You’ll find that fish peak a number of times through the glutamates in the flesh building up and becoming more savory. It’s fascinating.

What was your inspiration for wanting to figure out how to use more of the fish?

A lot of it came from the fear of my restaurant closing because I chose to select the most stupid business model. The labor is really expensive, the product is expensive, and the perceived shelf life is so short. To be able to take more from fish and generate more revenue was a huge driving factor. But also, if you, as a person, take something and remove it from the environment it’s in, whether it’s a spear of asparagus, a carrot from the ground, a cow from the field, or a fish from the water, you’ve got the responsibility of using that whole fish because you’ve committed to that. To only use half of it is ridiculous. It’s disrespectful, it’s unethical, and it’s creatively limiting to only interact with one part of the thing.

The industry standard, which is considered fine, is that 45 to 50 percent of the fish is used. And then the other half is either getting thrown in the bin, or it’s potentially being used for stock. What I’m trying to do is bring desirability to the other half of the fish that is being overlooked. And if I can bring some desirability to a Western audience—the audience that is looking at a fish as two fillets and a head at the moment—then that’s what I’m trying to engage in. I never set out to wear the Captain Planet uniform, but through my work, I’ve ended up with a product that I can store for longer, it tastes better, and I can use more of it.

Also read: Rethink your whole fish strategy with these 8 tips.