Get a free recipe
Subscribe
Why Are There No Eggs in Some Indian Cakes?
By: Priya Krishna Illustration: Yoonhwa Jang 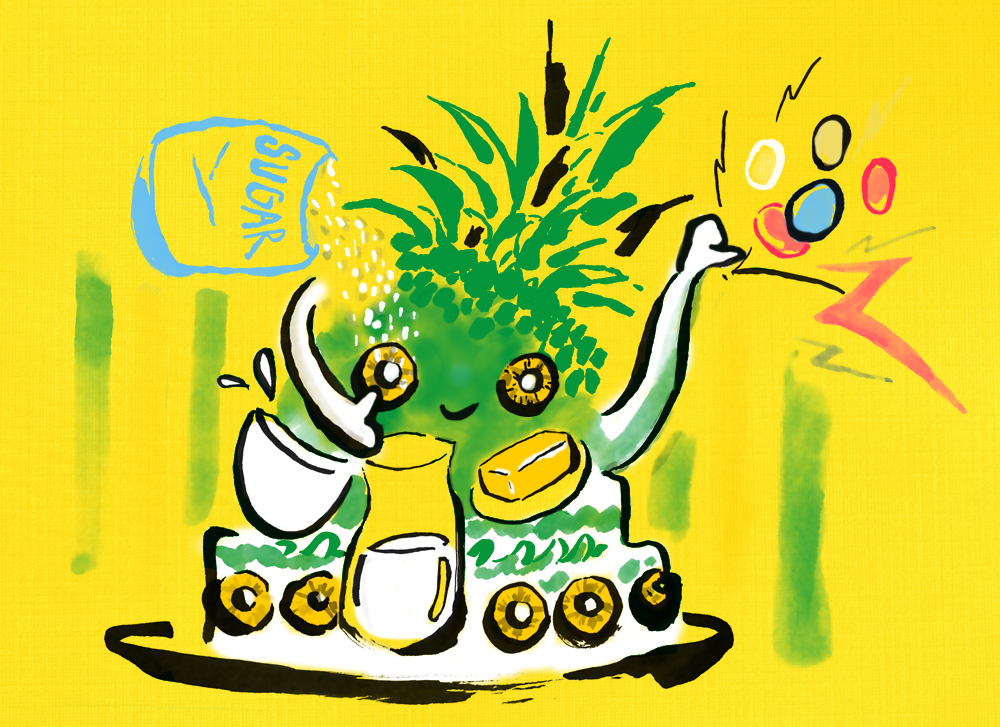 Growing up, I ate all the usual stuff—cakes, brownies, cookies, and the like. But when I had cake at a friend’s birthday party, I’d always notice something a little…off. It was richer than I was used to. More moist. Not as airy. Then I figured it out: My mom’s chocolate torte, our waffle batter, the Ghirardelli brownie mix we bought at Costco—none of it had eggs. All the desserts served in my house were eggless.

My family doesn’t do flan or quiche. The most common complaint we have about a food is that it’s “too eggy.” But we’re not exactly unique: some South Asians prefer eggless desserts.

Traditionally, that category includes Hindus from the Brahmin caste—the antiquated hierarchical class structure in South Asia. A sizable portion of the population is Hindu and vegetarian; eggs, as potential living beings, are considered non-vegetarian. In South Asia, vegetarianism—and by extension, an eggless diet—is considered an upper cast privilege, as lower caste people must rely on meat and eggs as regular sources of protein. Some people in India demonstrate an elitist attitude towards not eating eggs.
My family is neither Brahmin nor practicing Hindu. But my parents were both raised in India, in Hindu vegetarian households. Here in the U.S., we have the privilege of access to a wide array of ingredients. We don’t tend to have eggs around, and we like the taste of eggless pastries.
It’s also worth pointing out that many Indian desserts are eggless. Think of gulab jamun, deep-fried doughnuts soaked in rosewater syrup, or kheer, a cardamom-tinged rice pudding, or burfi, a milk- and sugar-based fudge. Mithai shop owners usually aren’t whipping egg whites or separating out yolks. More likely, they’ll be grinding nuts into a paste, boiling down milk and sugar, or dunking something spherical into syrup. If there is a fundamental ingredient in Indian sweets, it’s milk. It’s worth mentioning here that there are plenty of savory egg dishes in Indian cuisine—from bhurji to keema to akuri. But in sweets, eggs are less universal.

Eggless pastries are lighter and gentler than your average eggy confection. The cakes don’t rise quite as much, and they aren’t nearly as filling. You won’t find buttercream or cream cheese icing on top, either; I’ve found that many of these pastry shops use a whipped cream–based frosting. The widespread presence of pastries themselves in India, my dad supposes, is, like tea, a relic of British colonization. He went to boarding school in Dehradun, and he recalls that the most popular desserts in the dining hall were not halwa or gulab jamun, but the eggless apple and strawberry tarts—British standards that had been adapted to suit local tastes.

You’ll never see someone in a mithai shop whipping egg whites or separating out yolks. More likely, they’ll be grinding nuts into a paste, boiling down milk and sugar, or dunking something spherical into syrup.

A little over a decade ago, a no-frills eggless pastry shop called Hot Breads—promising “Indian-style confections”—opened up in my hometown of Dallas. The Indian community practically broke down its doors, and the place delivered, offering the kind of understated, not-too-sweet cakes that my parents had come to love in India. The shop quickly became the dessert go-to for any kind of celebration among our family. Out of all of Hot Breads’ offerings, the one that still induces major hunger pangs for me is the pineapple cake.

Pineapple cake, in general, is a very popular item in Indian pastry shops, though none of the family members and Indian friends I spoke to could tell me exactly why this is the case. The one at Hot Breads appears unremarkable, just folding in diced pineapples to a standard eggless cake batter. It doesn’t have dozens of layers, a decadent icing, or fancy decorations. It’s just a fluffy cake with a sweet, mildly acidic kick. But it’s delicious in its airiness and simplicity—it’s not the sort of confection that will weigh you down or have you immediately reaching for a glass of milk. Oftentimes, that’s exactly what I want.

I called Hot Breads every single day for two weeks to get the recipe for the pineapple cake, and each time the employee who picked up would either hang up or say the owner was busy. Finally, I got my dad to call and speak to the store employees in Hindi. He found out, to my dismay, that the owner was in no way ready to part with his pineapple cake recipe. Thankfully, I found a woman named Madhuram who runs a blog called Eggless Cooking, and she claimed to have developed a recipe that reproduces Hot Breads’ pineapple cake to a T. I self-consciously baked the cake for my roommates, who were extremely skeptical as they watched me puree tofu and yogurt and add it to the batter. My baker boyfriend protested as I blended the pineapples directly into the mix, not putting them on the bottom of the pan to caramelize, as is done with a pineapple upside down cake. “It’s just not that kind of cake!” I kept telling him defensively.

Thankfully, the end result was a hit. And I knew on the first, feathery bite that this was the cake from my childhood.

This story has been updated to reflect the nuanced role of eggless desserts in Indian culture.