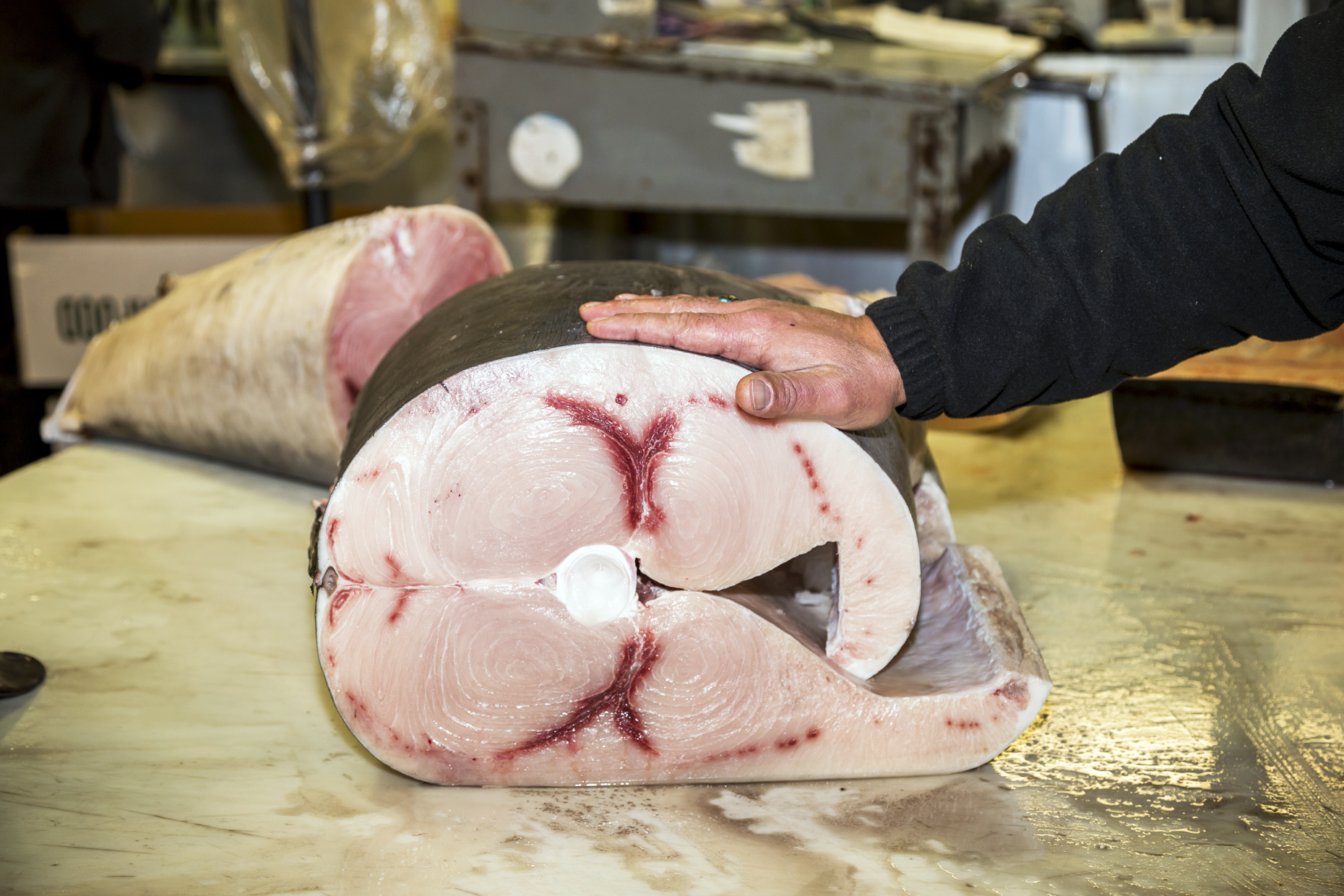 Scouring the 700,000-square-foot Bronx market for a symphony of seafood. We’re with The Guy.

By the time I pulled into the parking lot at the New Fulton Fish Market around 3 a.m., Mark Drabich was about to light up the night’s celebratory cigar. A market journeyman named Emilio was loading the back of Drabich’s 16-foot refrigerated truck with crates of seafood: salmon from Scotland and branzino from Greece, opah caught off the New Zealand coast and a small raw bar’s worth of oysters from Wellfleet, Prince Edward Island, and Washington State.

But Drabich, who owns Metropolitan Seafood & Gourmet—a fresh fish and specialty foods store serving home cooks in and around Lebanon, New Jersey—remained on the hunt for more marine gems. A case of Portuguese sardines he wanted to have a look at was rumored to be coming in. And as he weaved through the vendor’s tables, settling up bills and trading stories with the wholesalers, he stopped to admire the ruby-colored gills and “eye clarity” on a red snapper, and to streak a finger across the flat side of a stray knife coated in what looked like cheesecake residue. It was actually congealed swordfish fat. “That is just what you’re looking for from a swordfish,” he said approvingly. For a man who arrived at the market before its official 1 a.m. opening, and who still had a day at the store ahead of him, Drabich was remarkably animated.

Since 2005, the 700,000-square-foot fish market has been located in the Bronx’s larger wholesale food distribution hub in Hunts Point—the place from which about half of the meat and fish (and 60 percent of the produce) served and sold at grocery stores and restaurants across New York City originates. That includes everything from the fluke on the tasting menu at Le Bernardin to the browning bananas purchased at a local bodega. It also includes nearly all of the fish sold at Metro, which serves a fiercely devoted clientele from New Jersey’s affluent suburbs as well as Manhattanites who have weekend homes nearby.

Before 2005, the Fulton market operated for nearly 200 years in southern Manhattan, most of that time just off the South Street Seaport waterfront. With literal centuries of history came centuries of grit, including a longstanding mob influence that was eventually ousted in the Giuliani era. The nightly vibe bordered on chaotic—a stomach-testing mix of diesel exhaust, dueling cigarette plumes, and the perennial slick of rotting fish guts coating the pavement. With a lack of accessible toilets, street peeing was common, and on hot days the stench was particularly formidable. As Drabich, who started going to the old market in the 1980s, recalls, “no amount of ice could possibly help.”

It also had an intoxicating, old-world romance to it—something that many workers miss in their updated digs. The new market has both functioning bathrooms and frosty climate control, as well as a night guard sizing up visitors at the gate. A small canteen turns out Greek salads, wraps, and surprisingly drinkable espresso. It is by design a more sterile and controlled environment. Still, at the end of the day, it remains a giant warehouse where forklifts careen through the central aisle at perilous speed and a bunch of (mostly) dudes toting deadly fish hooks sling fish and make blue jokes while the rest of the city sleeps. The seediness may be diminished, but there is still plenty of drama. Drabich, who opened Metropolitan Fish Market in 1988, cut his teeth as a fishmonger during the old market’s twilight years. A 20-something pisher with a new business, a new wife (and baby on the way), and an intense work ethic, he apprenticed with guys like Bobby DiGregorio—a market legend who literally wrote the book on how to grade tuna fish. “He is the Steven Tyler of the market,” Drabich said, admiringly patting his old buddy’s arm while comparing him to Aerosmith’s legendary front man. DiGregorio’s eyes crinkled with a smile, but he didn’t argue.

Today, with nearly 30 years under his belt, Drabich has become a pillar of the market himself. Here, personal connections (plus a reputation for spreading his buying power around, paying on time, and tipping generously) reap benefits. The morning I visited, he had already received five separate texts from suppliers urging him to stop by their displays. These texts—alerting him to the arrival of some pristine wild salmon or a supply of especially plump soft shell crabs from Florida—effectively serve as a courting dance. “They try to get to me first because they know that if they have something that belongs in my store, I’m likely to make a buy,” Drabich said. Meanwhile, beyond a strip-curtain-lined doorway, just outside of the market’s main thoroughfare, he scored a couple of live Dungeness crabs from a market vendor who otherwise exclusively sells to the Asian supermarket chain H-Mart.

After so many late-night years in the business, Drabich has developed heightened senses that help him sniff out exceptional quality. He can decide by squeezing the belly of a rainbow trout whether that particular one is worth buying. And he has formed trusting relationships with vendors that pay off over time. One wholesaler nicknamed Mark Tuna told Drabich straightaway that he didn’t have what Drabich needed that night. “Honestly, that is the best thing he could say to me,” Drabich said. “I don’t need fish; I need good fish.” A little after 5:30 in the morning, as the first glimmers of sunrise began brightening the Bronx sky and the market was winding down, Drabich closed his truck’s hatch (with the desired case of sardines inside) and set off for part two of his blurry continuum of a day. The total haul: upwards of 2,000 pounds of fish, costing several thousand dollars.

Sixty-five miles west and an hour and 15 minutes later, back in New Jersey, he took some quiet time at his desk to write Metro’s email newsletter—a collection of musings, humor, recipes, and shout-outs to what the shop has in stock that he sends to 8,000 subscribers twice a week. His staff began to arrive around 8, including his brother Michael and son Marco, to unload the truck, break down and display the night’s “catch,” and prep for any upcoming anniversary-dinner or birthday-party gigs. In addition to outside catering, Metro holds in-store pop-up dinners once a month that often sell out within an hour. They also cure fish in house and offer meals to go, like branzino wraps, grouper tacos, and clam rolls, that make good use of the market’s haul. When Drabich first opened, fish and seafood were his only focus. But over time, the shop has evolved to carry a well-curated pantry of specialty goods, including wasabi, preserved black truffles, coriander honey, and locally made infused sea salts. Drabich, who is half Lebanese, also carries things like imported za’atar and freekeh, as well as bottles of rosewater and halloumi cheese.

“It all started when my wife and I were trying to find saffron to make paella at home,” Drabich recalls. “For a long time it was easier scoring an eight-ball of coke than a jar of saffron around here.” As Metro’s doors opened to customers for the day at 9, Drabich would have had every reason to head home to crash. Instead, he gathered his staff for a morning huddle, ending the pep talk with the reminder: “Don’t be dicks to yourselves or each other.” Then it was off to the next race.

The son of immigrants (his father was Slovakian, his mother Lebanese) who started working as a teenager and was the first in his family to graduate from college, Drabich derives much of his identity through work. For the first two years his business existed, he took zero days off. Even today, at 53, he still calls the fish market his nocturnal home three nights a week. (He used to go even more frequently but now shares the job with staff.) “I don’t want to sound braggadocious,” he says, “but I don’t think there is anyone who can outwork me.” In an era where food shopping is becoming increasingly less personal and more automated, Drabich is among a thinning breed of old-school fish men. He keeps one foot firmly in the modern world: A vigorous social media user, he maintains a lively Instagram account under the handle Funky Fishmonger. But he also deeply believes in the power of showing up.

“I want the fishmonger to be elevated to what it once was,” he said.

In mid-2016, the Fulton Fish Market colaunched a website that enables restaurants and home consumers across the country to shop for their world-famous fish without ever stepping foot in the market. A Culinary Institute of America–trained chef named Anthony Dattolico does the legwork for them, weaving through the vendor stalls to fulfill online orders with the highest-quality fish available that night. Local customers like Drabich can also buy fish directly from the wholesalers and have it delivered. While more convenient than schlepping to the Bronx from New Jersey, Drabich said freight forwarding sacrifices hands-on quality control. “It is not like I ever get sent anything horrible, but it bums me out when I get something delivered that isn’t truly great,” he said.

Ultimately, Drabich believes his life’s work is to be the link between his customers and the ever-unpredictable sea. “Fish is one of the last foods that is truly hunted,” he said. “You never quite know what is going to be waiting for you.”