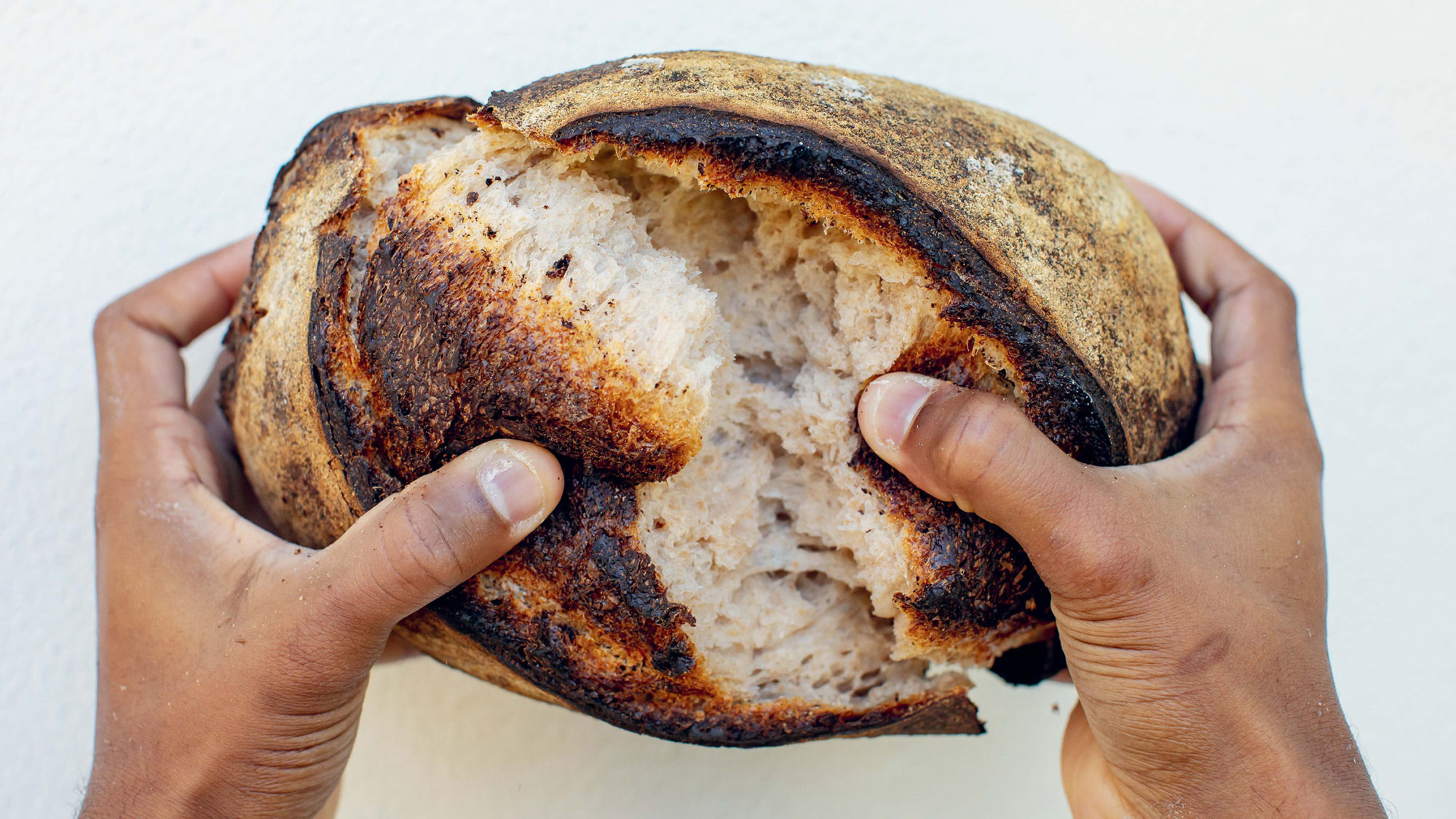 A baker and cookbook author is on a mission to prove that sourdough is as much about the Mexican birotes as it is about the French loaves.

When baker Bryan Ford was deciding on the photos for his first cookbook, he had one stipulation: no crumb shots.

“Crumb shots are part of the DNA of being a baker on Instagram, and I still catch myself posting them,” he admits by phone from his home in Miami. “But that’s the kind of loaf I’m trying to combat.” For the uninitiated, crumb shots are photos of crusty artisan bread loaves sliced open and held just so to reveal perfectly aerated, bubbly interiors. These images dominate the online bread-baking community—right now, you can find more than 100,000 posts tagged #crumbshot on Instagram. “I made a point to not show the crumb in the breads for my book,” Ford explains. “Instead, I ripped them in half. That’s what I want people to see.”

Ripping sourdough in half is an apt metaphor for what Ford has accomplished with his first cookbook—refusing the tidy cross section dismantles the idea that all bread should have the same polished aesthetic qualities and be perfectly curated for Instagram. But maybe a better way of putting it would be to say that Ford’s New World Sourdough, out on June 16, is taking the concept of sourdough and burning it all down. “I want you to lose your expectations of bread,” he writes in the introduction to the book. “I want you to see baking differently.” Ford, who works as a recipe consultant for bakeries when not baking and selling bread himself in Miami, is Honduran. His parents immigrated to the Bronx from Honduras in the 1980s, then moved his family to New Orleans, where Ford grew up eating the cuisine of his Central American roots, like baleadas, coconut milk tortillas, and pan de coco. When he set out to write a book, it was never a question that he would include recipes for the foods he grew up eating and loving, as well as many other recipes that celebrated the breads of Latin America. The only boundary that Ford set for himself was to make every bread—from Puerto Rican mallorcas to New Orleans muffaletta rolls—with natural leaven, widely known these days as sourdough starter. In highlighting ingredients like plantains and coconut, and techniques from his beloved Honduras, Ford wanted to show bakers, new and old, that there’s more to sourdough than just crumb shots and Reddit boards. In fact, there’s a lot more.

When asked to describe sourdough bread, many would default to those European-style crunchy artisan loaves made famous by bakeries like Tartine Bakery, Sullivan Street Bakery, and La Brea Bakery—in part because that specific style of bread has overrun social media lately, with more people turning to bread-baking as a quarantine pastime. But, as Ford himself realized when he started to make traditional Latin breads with sourdough starter, sourdough is just a fermented mixture of flour, water, and good bacteria. When it interacts with wild yeasts in the air, it enables dough to rise. Ethiopian injera is sourdough, Indian dosa is sourdough, Sri Lankan hoppers are sourdough, Sudanese kisra is sourdough. Technically speaking, any fermented bread made between roughly 3,700 BC and the invention of commercial yeast in the 1800s could be considered sourdough, too.

Ford came to this realization himself one afternoon a few years ago, when he decided, on a whim, to throw some of his starter in a recipe for pan de coco, a traditional Honduran sweet bun filled with dried coconut. Ford had always baked and cooked (in college, he and his now wife hosted cooking classes from their dorm), but it wasn’t until 2016, when they moved to Miami and Ford was working a day job as an accountant, that his baking hobby turned into an obsession.

He started cataloging his bread on Instagram and on his blog, selling loaves at farmers’ markets in Miami, and staging at Sullivan Street Bakery’s Miami outpost. As his social-media following grew, he found himself nearly falling into a trap of narrow-mindedness around the meaning (or definition) of what bread “should” be. He was reflexively making his bread adhere to the characteristics and qualities of the artisan loaves he saw proliferating on Instagram: “The open crumb! The dough has to be this temperature when you mix it! You’ve got to add ice cubes to your cast iron pot!” When he took the pan de coco out of the oven (it had risen and baked beautifully), he saw his perspective change in real time. “I was like, wait a second, sourdough bread can be anything,” he recalls. “Why does sourdough have to be this traditional European-style or American West Coast–style loaf?” Before long, he was adding the same sourdough starter to beignets and king cakes, the sweet delicacies he had grown up eating in New Orleans. He decided to consciously reject the notion that sourdough meant only one thing. “‘Sourdough’ is just a way to make bread rise,” he says. The rest of the near-infinite decisions are left to the baker’s discretion. After all, Ford said, “there’s a big world out there.”

Take the birote sourdough breads of Guadalajara, Mexico, as an example. The sandwich rolls have been made in some form since the 19th century, when the country was under colonial French occupation. Birotes, which are roughly football-shaped, are made with a starter that is refreshed with limes, eggs, and beer, a sourdough culture that is distinctly Mexican. Ford’s book features a recipe for sourdough birotes that have a deeply baked dark crust, as they are meant to be served in traditional Jaliscan tortas ahogadas—rich sandwiches drowned in salsa.

Upending our ideas about what sourdough bread looks like isn’t the only thing that Ford wanted to do with New World Sourdough. He also pushes back on the expectations of what a sourdough baker should look like, too. “When I look at videos of people shaping sourdough loaves, I’m like, ‘Man, there are never any brown or black hands doing these videos.’” As more and more people get into baking sourdough (Ford says the traffic on his site has quintupled over the past month), they will inevitably seek out cookbooks and professional bakers from whom they can learn this new skill. But despite the fact that bread-baking is a craft performed the world over, the overwhelming visible majority of well-known sourdough bakers are white.

I’m like, ‘Man, there are never any brown or black hands doing these videos.’

“If you were to look at the general sourdough landscape, amplified by social media, you would think that bread bakers are only these cool white dudes with tattoos,” Roxana Jullapat, owner of Friends & Family Bakery, tells me by phone. “I’m a brown woman in Los Angeles,” Jullapat says. “Trust me, I am doing things that are an exception to the rule almost all the time.” Betsy Gonzalez, owner of Osono Bread in Atlanta, has experienced the same frustrations about the unbalanced representation in bread-baking. “A bread book that emphasizes Latino heritage shouldn’t be an anomaly,” she says. “In the baking community, the more recognizable, frequently featured elite bakers skew heavily white, male, and maybe cis-gendered, as well. We need to break that idea, that this is just a white-leaning craft.”

Jullapat sees Ford’s decision to include traditionally Latin ingredients like coconut in his recipes as an opportunity to disrupt these narrow, limiting narratives. “He’s enriching the tradition of sourdough by breaking the rules,” she says. “When we bring diversity to the ingredients, we are forced to nod at the culture that brought that ingredient to us.”

One of Ford’s favorite recipes from the book is for Honduran semitas de yema. When he was a kid, no matter what financial situation his family was in, his dad always found a way to bring home bags of the yeasted round snack breads topped with cracked coconut and lard. “When you grow up in a household with immigrant parents who are trying to learn English, clean houses, shovel snow, and park cars to get food on the table, they still found a way to show us what it means to be Honduran,” he tells me.

Unlike the traditional semitas of his childhood, Ford’s are leavened naturally instead of with commercial yeast, but the nostalgic feeling they inspire in him hasn’t changed. “My dad would sit outside and dip semitas in his coffee at 5 p.m. That recipe for me, it’s super special.” Ford anticipates that people will see semitas and think they’re the same as Mexican conchas, and it’s for this reason that Ford remains committed to opening people up to the many breads that exist beyond artisanal European sourdough. “People need to understand that, in other countries and other regions, we have very distinct breads, as well. A concha and a semita might share some ingredients,” he says. “But [by that logic] isn’t a baguette the same as any other French bread, if it’s just flour, water, and salt?”