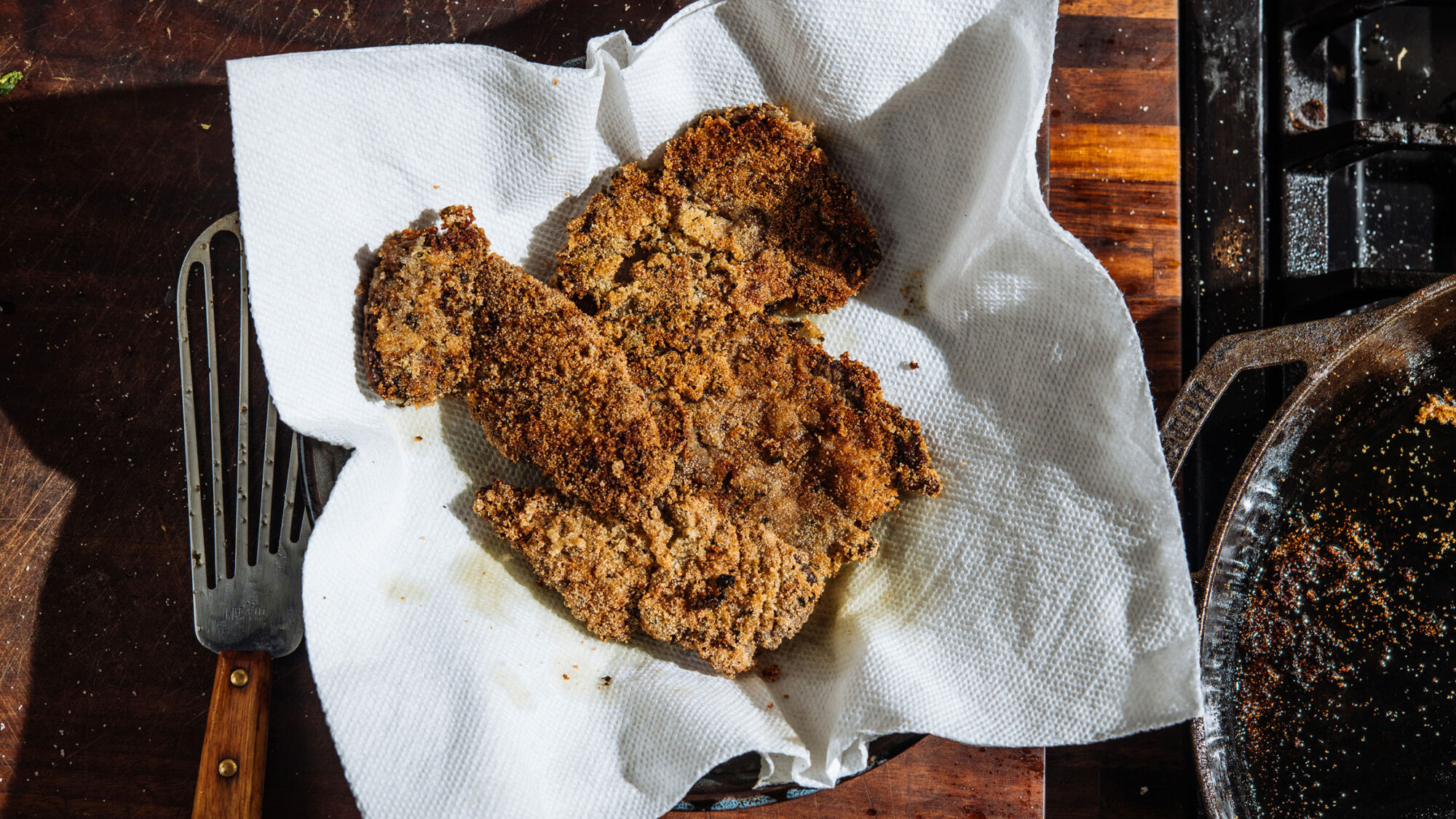 Marinate it in turmeric-spiked chutney, bread it with semolina, and fry.

Dad did not cook much. He did make a mean Cream of Wheat. I hear your eye rolls: Yes, Cream of Wheat comes in a box with instructions and could be considered assembling rather than cooking. I consider it cooking because he cooked, yes, that boxed Cream of Wheat with precision. Thanks to him, I thought I knew my way around cooking with fine-grained wheat. Then came sooji.

Sooji is often called “Indian semolina,” though that is a misnomer. Semolina, the kind used in pasta, is made from hard durum wheat. Sooji, also known as rava, is milled from soft wheat, according to Madhur Jaffrey in an explanatory aside in her great Vegetarian India. Sooji is available in both coarse and fine grains, and it’s often used to make a dry-roasted savory pilaf called upma. I have cooked a lot of curry-leaf-scented upma; I had never thought to use sooji as a crackly, rough-textured breading—until I encountered a recipe for beef cutlets in Ruta Kahate’s 5 Spices, 50 Dishes.

The book is trim, with only 50 recipes. In it, Kahate—a Northern California–based author and cooking teacher—harnesses the power of five spices: coriander seeds, cumin seeds, mustard seeds, cayenne powder, and ground turmeric. Her recipe for, as she calls them, fried green beef cutlets employs two of those spices, turmeric and cumin seeds, in an impetuous herb chutney. She says in the recipe’s headnote that these cutlets are her husband’s favorite dish and that they never make it all the way to the table, being consumed as they finish frying. I quickly learned why. You start by pounding thick slices of beef eye round or other lean cut into nearly see-through pieces—a process that requires a meat mallet or, in my case, because I do not own one, a small cast-iron skillet. I joke not about the necessary translucence. I have made the recipe without pounding the cutlets head-scratchingly thin, and the cutlets wept at my decision while they fried, rendering their would-be crust soggy and noncommittal. Then you take the turmeric and finely ground cumin seeds and whir them with cilantro, hot green chiles, garlic, and ginger into a smooth chutney. The chutney is smeared across the surface of each face-mask-thin cutlet and left to season for hours in the refrigerator. Or 30 minutes, if you need your cutlets stat.

A shallow pool of oil goes into a large, heavy skillet. Like, very large. The larger the better. I have had the most success with a 12-inch cast-iron skillet. Remember: The surface area of the cutlets has been pounded into corporeal near obliteration. As such, they take up a lot of space in the pan, and they will cook in about five minutes total. Turn the heat to medium. While the oil heats, grab a large plate and cover it with your choice of either sooji or Cream of Wheat. Test the oil by tossing in a bit of sooji. It should gurgle and go brown fairly quickly. Dab the marinated cutlets to remove excess moisture and large globs of chutney. Run a cutlet through the sooji, ensuring every possible part of the cutlet is covered. Add to the pan. Repeat, but do not add more than two or three cutlets to the hot oil at once. The cutlets should ideally not touch while frying. When the breading has adhered to the frying side with Magic Shell intensity, and the color has gone from dark beige to beaver brown—two or so minutes—flip the cutlet with either a heat-safe spatula or tongs. Move it to a plate lined with a kitchen towel or a paper towel.

Take a bite. Because you should, immediately. A jeopardizing move, hot beef and all, but worth it. Note the bumpy crinkle and the sweet softness of the grainy wheat. Feel the fiery, verdant gloss of the green chutney against the barely there backdrop of the whisper of beef.

Dad, I am certain, has never seen Cream of Wheat put to such diametric, thrilling use. His loss.