Get a free recipe
Subscribe
The New Jersey Sloppy Joe Is Not the Sloppy Joe You Know
By: Rebecca Firkser 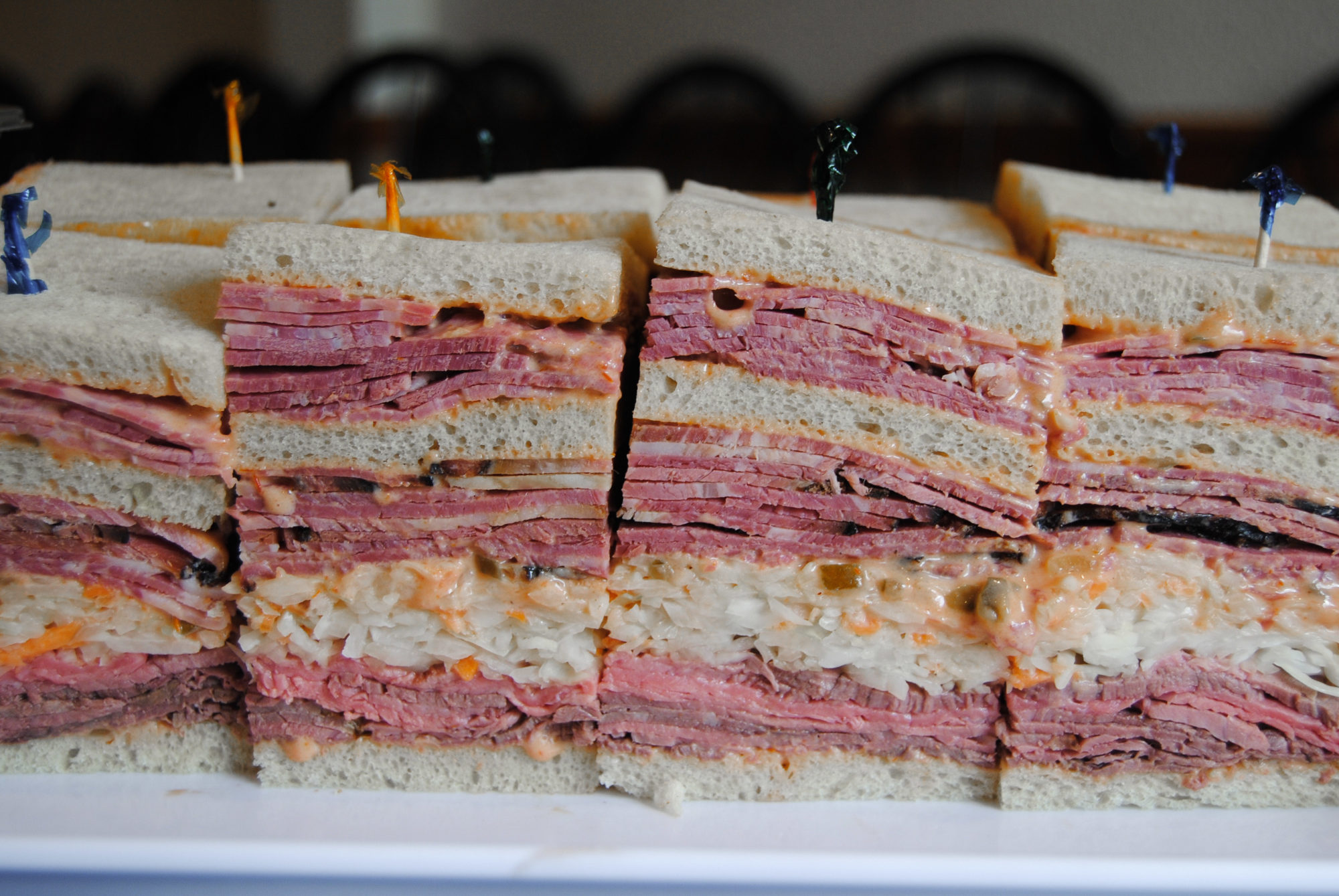 Somewhere between a reuben and a Cuban, the New Jersey sloppy joe is worlds away from the saucy sandwich your elementary school cafeteria served.

Ask for a sloppy joe in northern New Jersey, and you won’t get a tomato-sauced ground meat sandwich on a bun. In this part of the country, where I grew up, a sloppy joe is something else entirely. It’s a triple decker sandwich—cold deli meat and cheese on dense rye bread—glued together with coleslaw and Russian dressing.

The New Jersey sloppy joe is, like many dishes native to my home state—like Taylor ham or disco fries—a bit of an enigma. It’s similar to a Reuben, not quite a Rachel (turkey subbing in for corned beef with coleslaw and Russian on griddled rye). No one is exactly sure where the sandwich came from, but it sure lives in northern New Jersey now. While many have opinions on the origin of the joe, nothing is certain except for a few details.

It all started at a bar in Cuba in the 1930s. Probably. The mayor of Maplewood, New Jersey, at the time, Thomas Sweeney, spent some time at a Havana bar called Sloppy Joe’s, where he was served a multilayer cocktail sandwich. Sweeney liked the sandwich so much that he commissioned some friends, Heinz Burdorf and Fred Joost, the owners of the Town Hall Deli in South Orange, New Jersey, to re-create the dish. The resulting ham, beef tongue, and Swiss sandwich became a staple at the deli.

“No one has a clear story about the sandwiches,” Matt Wonski, vice president of the Town Hall Deli, told me on a quiet Sunday morning at the restaurant. Wonski’s father bought Town Hall in 2001 from Burdorf’s family. Even a special 2016 pilgrimage to Sloppy Joe’s in Havana shed little light on the matter for Wonski. The sloppy joe at the Millburn Deli

There’s no doubt, however, that once the joe spent time in New Jersey, it became a classic. In the ’30s, as restaurateurs with package liquor licenses regularly filled orders for parties at nearby estates, Burdorf and Joost began including sloppy joes along with deliveries as a gift. Slowly, word spread.

What makes a New Jersey joe a joe? Wonski says the sandwich must be made on three slices of rye (Town Hall uses a pullman rye cut crosswise on a deli slicer to make an even canvas), with two meats, Swiss cheese, coleslaw, and Russian dressing. Though many delis make popular sloppy joes, each has details that set them apart. Town Hall’s coleslaw is dry-brined for three days, then strained of excess liquid. No mayo. They butter each slice of bread as an anti-sogginess shield from the Russian.

Andrew Morgan, owner of the Millburn Deli in Millburn, builds on rye boule. His coleslaw, which is also brined for three days, includes mayonnaise. “The mayo we use is called ‘extra heavy’” Morgan revealed. “It’s like heavy cream as opposed to skim milk.” The Millburn Deli is also lauded for the way they slice their broad, oval-shaped sandwiches: cut into thirds diagonally, so the middle is a triangle. Regular customers returned joes for being cut any other way. “People even debate which section of the Joe you eat first,” Morgan added, citing arguments observed on Facebook. “That middle triangle either has to be eaten first or has to be saved for last.” A map above the register shows everywhere in the country Town Hall has shipped a sloppy joe.

And then there’s the Jewish version, just as popular as the original around New Jersey. To keep it Kosher, Eppes Essen, a deli in Livingston, uses three layers of meat instead of cheese, and no ham. Jeff La, who’s been general manager for the past 15 years, noted their best-seller has turkey, corned beef, and roast beef. Eppes Essen also has a unique coleslaw method: They mix mayonnaise into four-day brined cabbage, then strain out excess liquid. “We’re the only place that does that,” crowed La. “I probably have the best coleslaw in the United States.”

After coleslaw, Russian dressing is key, and it’s never just ketchup and mayo. While no one was willing to share their exact recipe, Morgan revealed they use mayonnaise and relish, but no ketchup, and La expressed an affinity for chile sauce.

Though it’s rare to see a sloppy joe on a menu outside of northern New Jersey, Wonski, Morgan, and La ship sandwiches around the country. Wonski, who ships about 30 a week, keeps a map above the register with a red pin stuck into each place he’s sent a sandwich. Morgan knows every February he’ll send 20 joes to a woman in Michigan for her Super Bowl party. “I ship sandwiches so far I don’t even know how they find out we exist.”But people do find out, because there’s nothing quite like a sloppy joe. La considers it a Jewish creation (as do half of my relatives); the other half say it’s a riff on an Italian sub. It’s definitely sort of Cuban. Wonski and Morgan, however, maintain the sloppy joe is something else entirely: “New Jerseyan.”