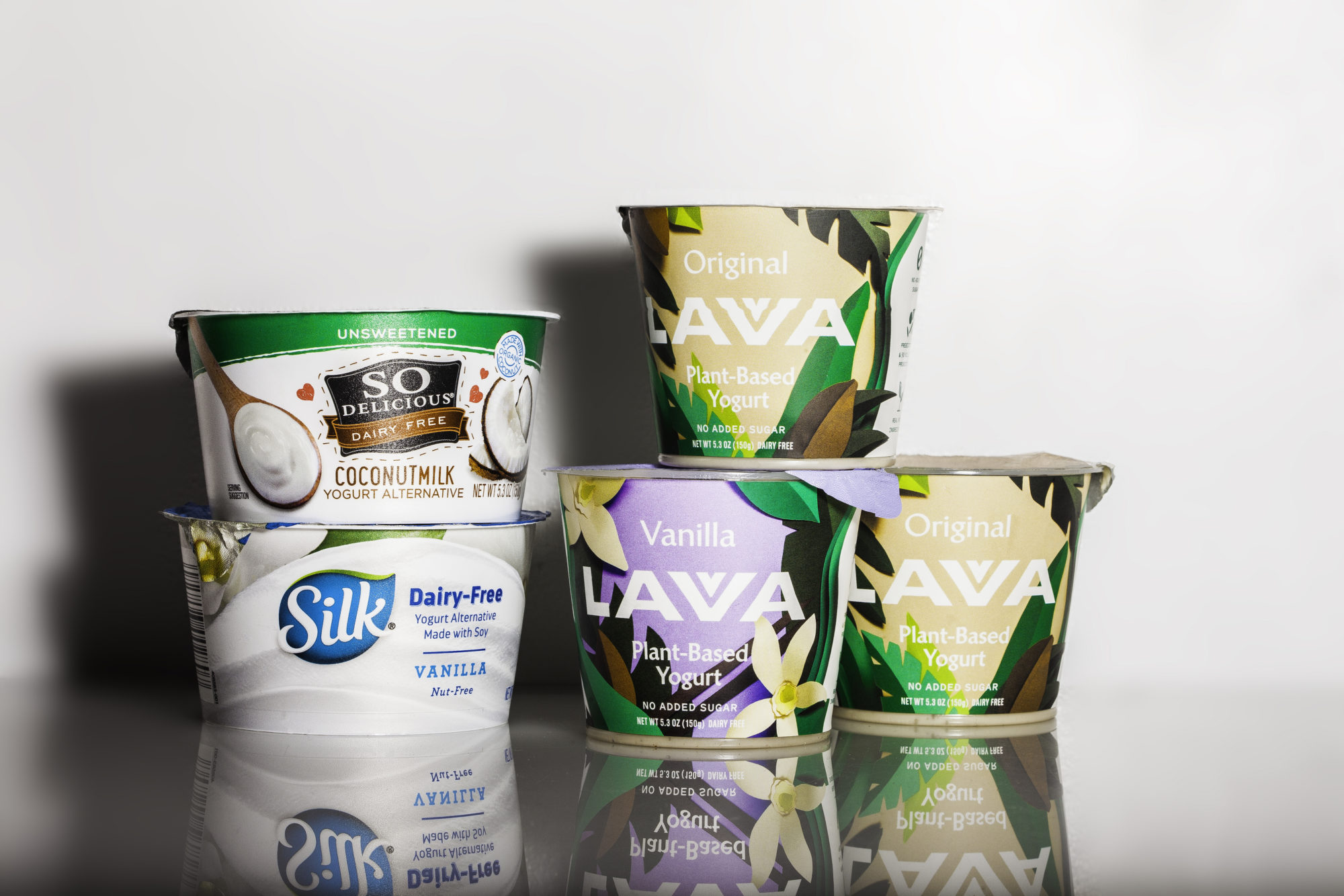 Nondairy yogurt? Even at its best, it’s not an exciting foodstuff. At its worst, it’s indigestible. For generations, even vegans were averse to this very bad-tasting dairy proxy, often relegated to a hidden-away corner in grocery store fridges—next to the soy cream cheese and the I Can’t Believe It’s Not Butter.

In the ’90s, the main players in the game were So Delicious and Silk, but neither’s offerings had any unique appeal. It was squarely an alternative—a last resort if you craved parfaits in the morning but harbored an aversion to dairy. As Liz Fisher, the founder of the pili-nut-based yogurt company Lavva, recalls, “I remember when you couldn’t even give that yogurt away.”

Today, nondairy yogurt looks and tastes a lot different. It can be thick and creamy, it can come in many flavors, and it doesn’t always have that bitter and slightly artificial aftertaste we’ve come to associate with alt yogurts. It can be made out pili nuts, a tropical nut with a creamy texture, or flax seeds or almonds, and actually tastes pretty good. In other words, we are in a golden age of nondairy yogurt. But it was a long time coming.

In the 2000s, the nondairy yogurt options were still pretty lackluster, but nondairy milk was just starting to take off. Veganism was on the rise, and soy milk and almond milk were all of a sudden in vogue. Coffee shops were regularly offering nondairy milks to drop into the daily drip. Mainstream grocery stores were dedicating entire fridges to them. In 2018, 12 percent of all milk sold was nondairy, yet less than 1 percent of all yogurt sold was alternative, according to Nielsen Data. Yogurt as a whole, meanwhile, was booming—exploding to a $9 billion industry and growing, according to a report from the market research firm Packaged Facts.

Doug Radi, the chief executive of Good Karma Foods, saw an opening. “If there were a lot of consumers for plant-based milk, they are probably looking for other plant-based dairy alternatives,” he says. “There was an opportunity to [make] a product that had the texture and taste of real yogurt.” So in 2016, he launched flax-seed-based yogurt.

Around that time, companies like Good Karma were starting to discover vegan cultures. Typically, a culture—the bacteria required to start the fermentation process—is found in dairy yogurt. With the vegan cultures, those probiotic strains get isolated from the dairy.  This made it possible to ferment all kinds of alternative milks. It meant that you could achieve the naturally thick texture and tang of dairy yogurt. This completely changed the game. Instead of just two or three brands of nondairy yogurt, suddenly there were dozens, all made with different ingredients and offering specialized health benefits and tastes.

“We are in a golden age of nondairy yogurt. But it was a long time coming.”

In 2010, Silk struck gold with the launch of almond milk—now its number one beverage in terms of sales—and soon after began to plot a second crack at its nondairy yogurt formula. Monisha Dabek, the general manager for plant-based food and beverage for Danone, Silk’s parent company, would not share the exact changes made to the formula, but she said that since the launch of their almond milk yogurt in 2017, business has been more than steady. This year, both Silk and So Delicious (both are owned by Danone) will also launch oat milk yogurt.

As the grocery cooler cases got crowded, these new brands sought ways to distinguish themselves. Some went the all-natural route, touting the absence of stabilizers and gums that the big players relied on.

Anita Shepherd launched her coconut yogurt company, Anita’s Yogurt, in 2013 because she was a vegan baker who couldn’t find a natural and affordable nondairy  yogurt that would work in her cakes. Fisher’s company, Lavva, went all in on pili nuts, which she claims have a “neutral taste” and a “buttery, crème fraîche” texture when whipped with a little bit of coconut milk—no additives needed.

Forager Project, a cashew-based yogurt company, bet on an environmental appeal, claiming that unlike almonds or soybeans, cashews don’t require intensive agriculture. The company originally started as a cashew-based, ready-to-drink beverage line. But as soon as the cashew yogurt launched in 2016, “it was immediately a hit,” recalls Maude Manuokian, the chief community officer of Forager Project. “It became clear that this was our pathway.”

These companies also took a vastly different approach to marketing than their predecessors. For so long, nondairy yogurt was seen as a niche product that would only hold appeal for people with dairy allergies. But the rise of almond and soy milk had proven that these products had wider appeal. Companies adjusted their branding accordingly.

Fisher says she explicitly branded Lavva not as “nondairy” but as “plant-based,” with the idea that it would perform better if it was framed as as a standalone product rather than as a substitute for dairy. Lavva’s packaging is fun and designed with color blocking; it feels approachable and friendly.

But beyond these improvements in recipes and branding, nondairy yogurt is taking off now largely thanks to a shift in our eating habits. Trendy diets like paleo, Whole 30, and ketosis, which prioritize high fat, high protein, and minimally processed foods, have bolstered the appeal of nondairy yogurt. Figures like Michael Pollan have made “plant-based eating” a common term. And because of kombucha, people suddenly care a lot more about probiotics. In the same fridge, Fisher says, there might be organic milk and nondairy yogurt right next to each other.

These days, it’s pretty easy to find nondairy yogurt. I’ve seen it in drugstores and gas stations. Even Chobani, a Greek yogurt titan, just announced its first dairy-free yogurt. The whole category is growing at a steady rate of 54 percent, according to Nielsen data.

Still, it is a relatively young industry. The biggest hurdle, Dabek insists, is awareness. “The taste has improved over time, but many consumers remember what this yogurt used to taste like,” she says. “If a consumer has tried it before and didn’t like it, how do you get them to try it again, knowing the taste has come a long way the last 10 years?”

To put things into perspective, as of 2019, nondairy yogurt occupies about 2 percent of the yogurt market, according to Nielsen data—only a single percentage-point increase from last year. While some grocery stores will stock seven or eight different brands of nondairy yogurt, they are still stocking many times that number of dairy yogurts. Even within the dairy space, there are all sorts of new competitors: skyr, quark (similar to cottage cheese), Australian yogurt, and so on. It’s hard for any brand, much less a nondairy one, to stand out in such a crowded category.

And yet, consider this: A few months ago, I went to San Diego and visited its famous farmers market. I encountered close to a dozen stalls selling yogurt—and all of them were nondairy. Maybe these alt yogurts will never outnumber dairy yogurt in the grocery aisles, but their impact is undeniable.

As Shepherd puts it, “The landscape has changed forever. It is a whole lifestyle now.”