Get a free recipe
Subscribe
It Was Never Really About the Corned Beef
By: Alicia Kennedy 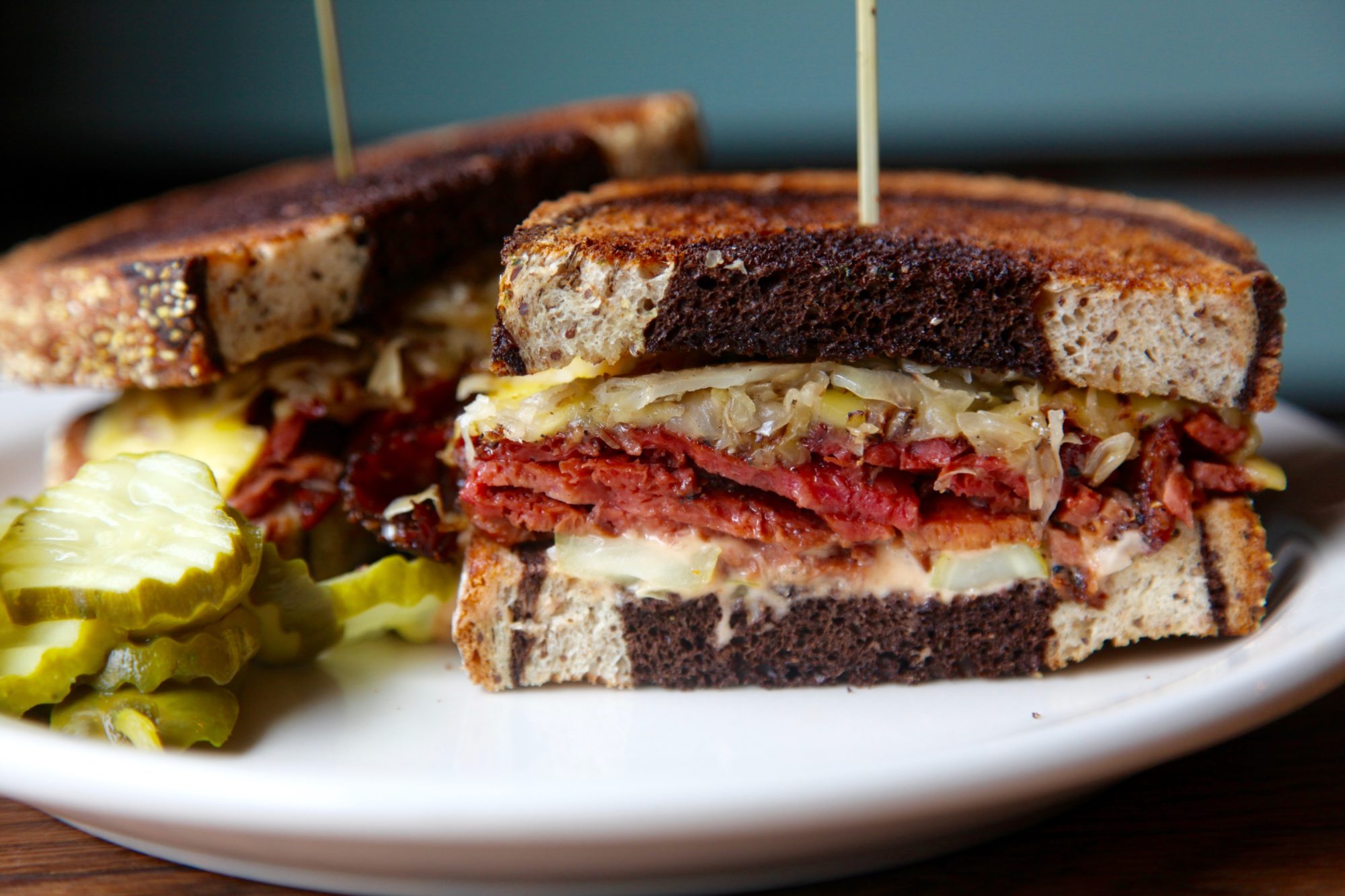 Vegetarian Reubens aren’t a replacement for meat. They’re a category of their own.

Vegetarians have been re-creating the classics of the American diner for decades: The BLT’s bacon has been turned into tempeh; the scrambled egg of a standard breakfast plate has been transformed into turmeric-tinged tofu. But none of them have given way to as many ardent vegetarian spin-offs as the Reuben.

Since its invention in New York City at the start of the 20th century, chefs have been rethinking the corned beef part of the equation and celebrating everything else about the sandwich: sauerkraut, Swiss cheese, and Russian dressing smushed between rye bread and then grilled. Zingerman’s Deli in Ann Arbor, Michigan, has been serving a vegetarian Reuben for over 30 years sans corned beef or any imitation. “It’s the Reuben without the meat,” says Rodger Bowser, head chef and managing partner at the deli, of the Lila & Izzie’s Skokie Skidoo, better known as #36. “You just put more cheese on it.”

A tempeh edition called Rucker’s Raucous Reuben was added five years ago. They pickle the fermented soy protein to give it a bit of that corned beef flavor, and, Bowser says, “it’s selling pretty darn good.” He credits the sauerkraut they get from the local picklers at the Brinery, as well as shifting understandings of how to make meatless cuisine delicious. “You don’t have to stick a ton of cheese in there anymore,” he says, by way of contrasting the new Reuben with their older version. Here, the tempeh may be providing a firm base and protein, but kraut is king.

For Nick Testa, a chef at New York City bars the Bonnie and the Penrose, adding a Reuben to menus is an easy way to have a big, filling, flavorful option for those who don’t eat meat. “It’s the most nonvegan item you can get,” Testa says. “That unctuous, fatty, braised beef—I love those flavors, and I was like, ‘How can I make this appeal to everyone?’”

At the Bonnie, in Astoria, Queens, he makes a classic-style vegetarian Reuben with an in-house smoked seitan that takes up to three days, but at the Penrose, on Manhattan’s Upper East Side, he went for thinly sliced beets instead. The beets are braised with smoky tea, liquid smoke, soy sauce, vegan Worcestershire sauce, coriander, pepper, and cumin. For the Russian dressing, he uses both chickpeas and aquafaba (chickpea brine) to make the fluffy mayo that gets mixed in with sauerkraut and Daiya provolone cheese. Other Reubens going the more vegetable-forward route include the collard green melt at Turkey and the Wolf in New Orleans, where a vinegary slaw takes the place of sauerkraut, a celery root edition on menus at Nitehawk Cinema in Brooklyn until recently, and the Mushreuben at Manhattan’s Westbourne with maitake mushrooms. Bon Appétit recently published a recipe that goes heavy on kale.

For some omnivores, the vegetable-filled versions of the sandwich are their own category. Writer and frequent Today show food host Alejandra Ramos still thinks about the first vegetarian Reuben she had, at a now-closed Staatsburg, New York, retreat center called Old Stone Farm, and would never order a corned-beef version.

In addition to the homemade sauerkraut and dressing, and the standard Swiss cheese, a slaw of shredded carrots and parsnips stood in for the beef. “I think the parsnips were the ingredient that made the sandwich sing. That woodsy, herbal, almost-floral taste of the parsnips was a really clever substitute that totally recalled the subtle spices you’d typically taste in corned beef.”

While vegetables may have taken the place of seitan or tempeh, especially at omnivorous restaurants, some vegan restaurants still hold onto an old-school approach. Orchard Grocer makes a beet-brined seitan for a pink color that imitates beef. Caravan of Dreams, which keeps the dream of the ’90s East Village alive, serves theirs with slivers of tempeh. But in the end, the best parts of the sandwich are all of the elements that make it crunchy, acidic, and melty.

“The corned beef isn’t the star of the Reuben show,” says Ramos. “It’s very much an ensemble production.”

Lead photo of the seitan Reuben from the Bonnie by Mike Di Tota.