Get a free recipe
Subscribe
The Mythos of Sourdough Starter
By: Cale Weissman Illustration: Vance Lump 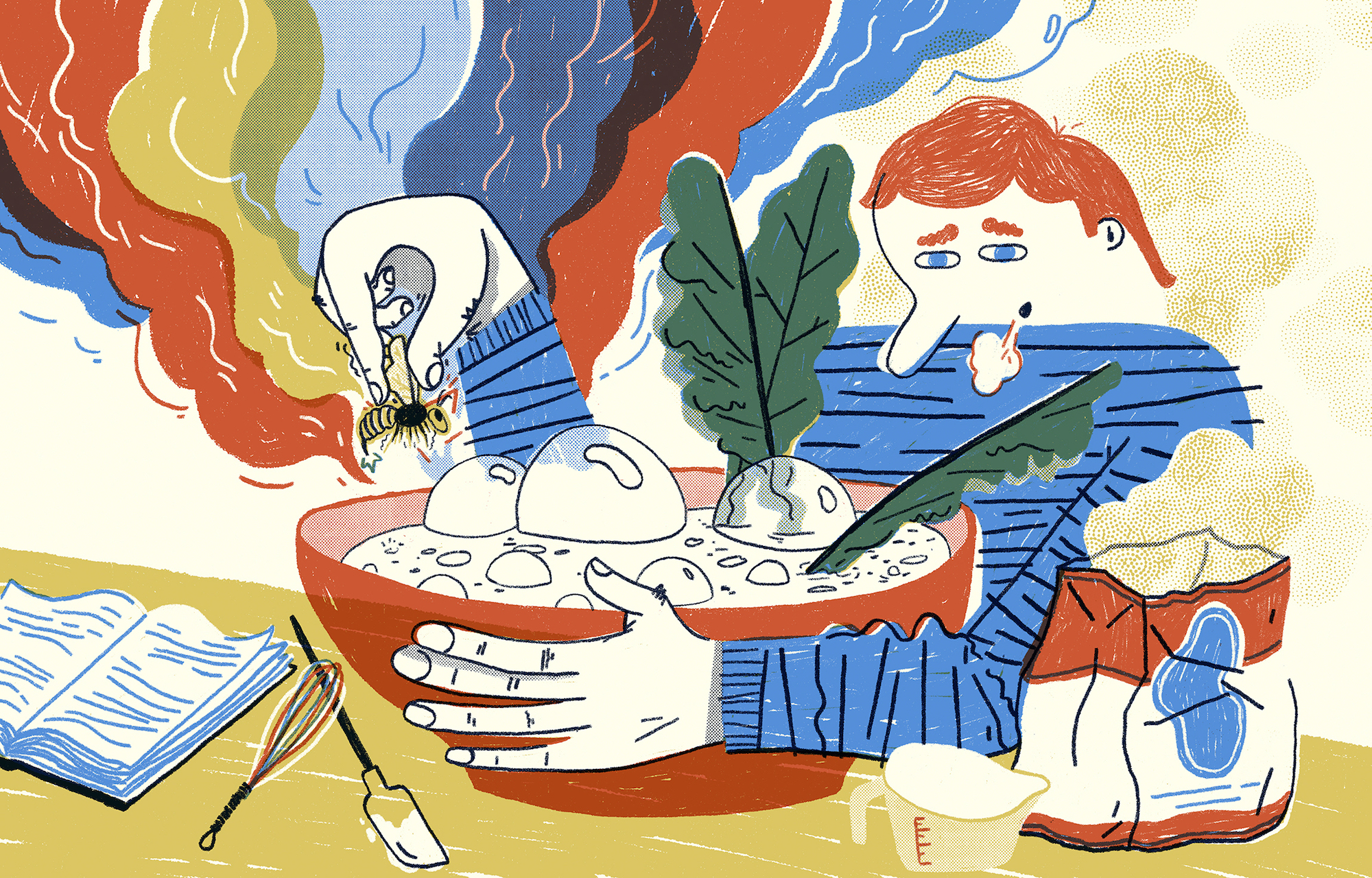 Making a sourdough starter? Don’t be afraid to stray from the recipe and add a dead wasp or a leaf of roadside kale.

Some months back I decided to take on some real-ass adult responsibility: sourdough baking. I’m not allowed to have pets in my apartment, and maintaining a living and growing potion of flour, water, and microbes seemed like an apt substitute, with the added bonus of no litter box. I feed my starter—which consists of mixing the same weight of flour and filtered water into a container with old starter—a few times a week. As I do this, the mixture pulls in natural strains of yeast from the air, forming a leavener that will make bread taste a lot better and more dimensional than those little grocery store packets of yeast. With this, I’ve formed a new routine as well as a relationship with a colorless, sticky mess. I’ve named her Fran and have already told close friends they are in charge of her if I go on vacation or die.

Mine is not a singular experience. The best bakers in the world treat their starter like a member of the family, or at least like something more than a perishable item on a shelf. Perhaps the most famous sourdough baker right now is Tartine’s Chad Robertson, who, unlike me, does not like to anthropomorphize his starter. Still, his is one of most well-known recipes, and he’s been known to share the recipe far and wide, and the actual starter with a few other select people.

Robertson’s sourdough is well known for a few reasons—for one, the bread at his shop tastes so damn good. More important, however, is that the starter recipe is a seemingly easy one that Robertson has taken time to perfect and explain. To re-create Robertson’s bread in all its glory is a beautiful, if minor, feat; when you do, the results are marvelous.

Sullivan Street Bakery’s Jim Lahey has had his sourdough starter going since 1992. It all started in Italy, he tells me, when he noticed a beautiful crop of dinosaur kale blooming in the countryside. So he did what anyone else would do: pick it and plunk it in some water. Then, some days later, he removed the kale and added flour to it. From there, he had his starter, which he still uses to this day. It has a “distinctive sort of sulfuric rotten cabbage” aroma, he says. He adds that though the starter is only 25 years old, the microbes that it’s pulled in from the air date back billions of years.

Here you begin to see the mythos of sourdough. It’s not just about following the right steps to make a crusty loaf of bread—it’s about cultivating and maturing a substance that is a part of you. Stick your hands in some water and add flour to it. If it takes off, your bacteria is the stuff of future bread—bread that only you could have made, no matter how closely another person follows the same recipe.

Lahey loves to talk about how the historical and experimental aspects intersect. For instance, he once noticed a Pliny the Elder reference to fermentation involving wasps. The baker wanted to know if this held up in practice. So Lahey—ever the mad scientist—mixed water with the corpse of a dead wasp (he’s quick to add that it was a “certain species” of wasp, not just any old wasp). Then he waited “until the water was turgid.” Once he added flour to this putrid concoction, “it immediately took off.” There, thanks to that old Roman so-and-so Pliny, Lahey was able to make a new starter from dead insects.

There are less disgusting, albeit still endearing, stories of starters, including a Wyoming family that has kept a starter going for over 100 years. There’s also San Francisco bakery Boudin, which has allegedly been using the same starter source since 1849. A friend of mine mentioned that the sourdough she keeps alive is as old as the Gold Rush. One starter, which you can see sold on Pinterest and eBay, is said to date back to the Black Death plague in 1633, although I find that hard to believe. And there are millions of blogs that wax philosophic about the best way to cultivate yeast.

Starter recipes sometimes differ in proportions and types of flours—some use fruit or fruit juices as a way to jump-start the fermentation process (although few go as far as Lahey’s kale- and wasp-dipping methods)—but they all rely on the same baseline of flour and water. The theory goes that these other factors—the bacteria inside, the ingredients used, and the environment around you—alter the flavor. San Francisco sourdough is said to be tastiest because it’s swimming in environmental bacteria that is unique from all other locales. This is all to say that every bread has a story. More important, every bread will likely be a bit different than the next.

In some ways this presents a real barrier for entry. How can one begin an endeavor that for so many others is an epochal and dynamic experience? Take this somewhat embarrassing example: I once cried while making sourdough bread—not due to its beauty or taste but because it just wasn’t working out. I had read and reread and then re-reread the recipe and thought I knew what I was doing, but the dough had other plans. Recipes often become scripture when learning new culinary tricks, and as faithful as I was to this one, it failed me, and as a sourdough novice, I wasn’t sure how to fix it.

The first step is just to begin, and then do it until it becomes intuitive. There are myriad resources out there. In my early days I turned to books and articles and videos to help me on my quest. The problem with these resources is that they explain systematically how to create something that is as much an art as it is a science. Some sourdough writers trip over the words and precise actions, and the resulting recipe is formulaic and onerous, while others are a bit more whimsical and abide by the philosophy that the only way to learn is by doing. I find videos (like this one) do the trick; making bread is about understanding how the dough reacts and moves, so being able to visualize it is an indispensable help.

Of course, there are very formal, universal steps for baking a sourdough loaf. First, you must have a stiff and active starter, one that’s at least been fed in the last day and is bubbling rapidly (I feed my starter with a 1-to-1 ratio of water to flour, like the recipe below from Sarah Owens’s Toast and Jam). You scale the starter up, using larger portions of the same water-to-flour ratio, so you have a large mass of leavening agent for the bread. The portion used in the bread is sometimes called the “levain.” Then you must mix that with a mixture of flour and water and let that sit for a process known as the “autolyse,” where the flour absorbs the water. Following that, you contort the blob in a variety of ways, depending on the school of bread-making you follow, over a number of hours to develop the gluten. Then, when the dough’s texture becomes more risen, lighter, and pillowy, you form it into a boule, which requires slightly more finesse than one might imagine. Then it rests for hours or overnight until finally it is time to bake, and you have good, crusty bread (or dense, beige by-product because something went horribly awry).

But many of these steps require a sense of intuition—a familiarity with the evolution of textures and colors that the dough should go through along the way. It’s a dance, really. Starters give clues about when they need feeding and when they’re healthy; doughs similarly have reactions to help guide you.

When I cried, it was because I had gotten caught up in the words and prescriptions. The dough was sticky and falling; it wasn’t rising the way it should. I was reading the words of the recipe too much and neglecting clues from the bread itself. When I was trying to form it into a tight ball it kept adhering to my hand, and the ball kept sagging outward. Weeks later I would realize that I probably should have added more flour initially to have made it a better loaf consistency and wet my hands more to keep the dough from sticking to me. These are things only the bread could have told me and not the written instructions.

For Lahey, who has written many cookbooks and is coming out with a new one this fall, the way to think about sourdough is as a journey of discovery. He wants to show readers and bakers alike that there are “a thousand roads to one end.” Sourdough literature is an exercise in creating a language, not so much a how-to. He creates formulas that have proven to work for him, and he hopes they will provide a basis of knowledge for others. “People will use it as a launchpad and kind improv off of it and tweak it. That’s the nature of bread,” he says.

In my book Sourdough I detailed how to begin a sourdough starter culture using a yeast water method whose vigor I find encouraging to many beginning bakers. However, all you really need to get a culture bubbling is some quality flour and pure water to farm the microbes responsible for fermentation. Set it in a warm spot (70 to 75°F is ideal), and in about 1 week, you will have a responsive culture that is ready to leaven bread.

Cale is a Brooklyn-based reporter. His work has appeared in Fast Company, Atlas Obscura, The New Republic, The Sweethome, and many more places.