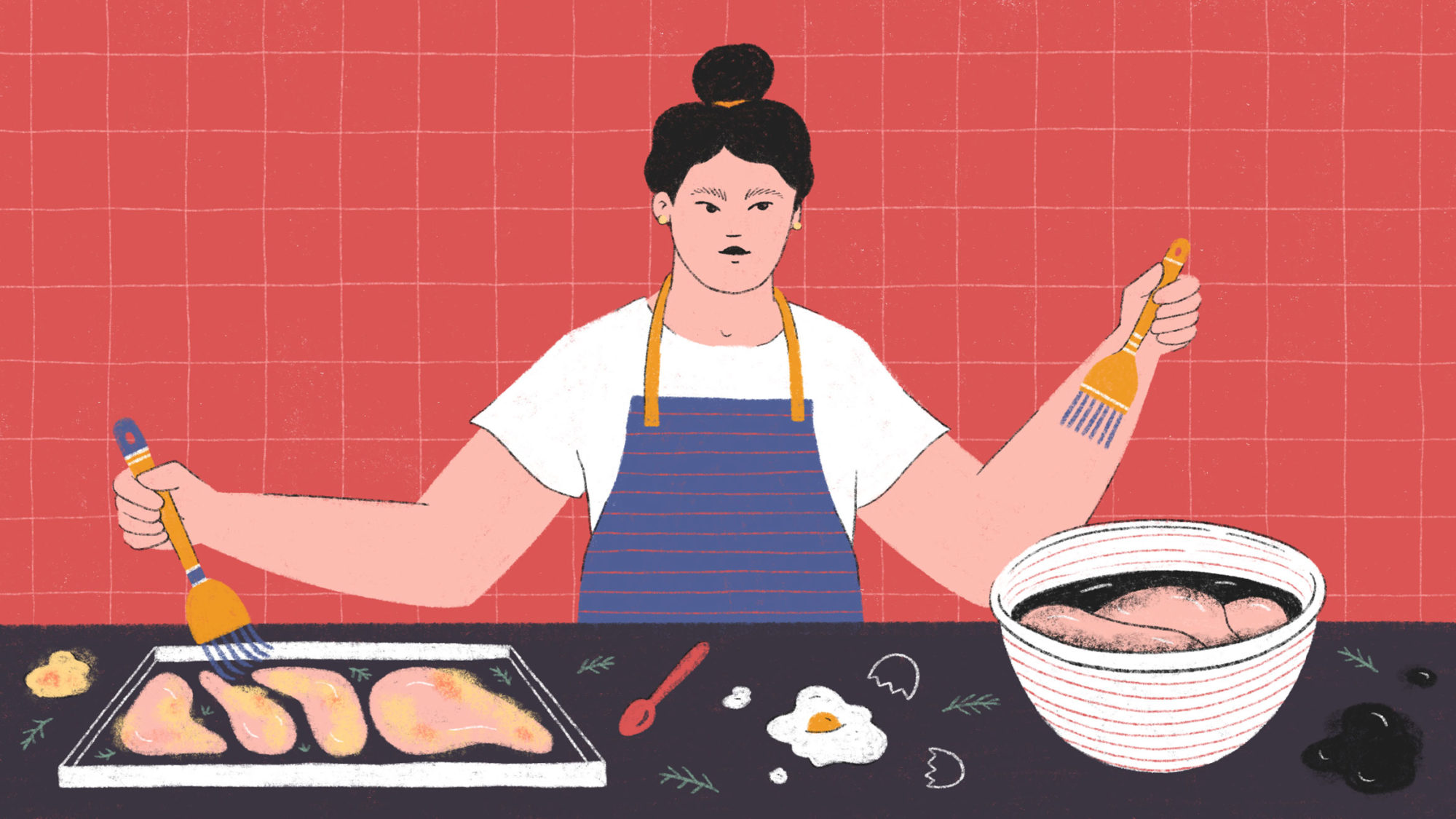 Cornell sauce and soy sauce play similar roles in infusing chicken with flavor. But combine the two and something special will happen.

Since I got married last year, I’ve come to appreciate my parents’ extremely acrimonious matrimony. In their household, every exchange was an invitation to spar, with none of the mutual respect of a Hamiltonian duel. Food, especially, triggered inordinate rage. Adding too much—or too little—butter could instantly thicken into screaming. Salt, messily shaken from a canister onto a plate, was weaponized as a stinging rebuke. The kitchen was often the scene of searing battles that went on into the night, long after dinner plates were cleared.

It was not lost on me that some mixtures create dissonance. My parents were of two very different minds when it came to cooking: One insisted upon using recipes; the other did not know how to follow them. One was based on upstate New York WASP culture; the other, Chinese by way of Taiwan. And there was no Asian-ish cooking in their home, at least not until I grew old enough to take on the stove. When asked to set the table, judging from the smells and sights in the kitchen, I either put down rice bowls, chopsticks, and yellow enamel patterned plates, or large, white plates with a fork and knife on either side. It was one way or the other.

But in the summertime, like much of America, they took their cooking and cacophony outdoors, to the grill. Bone-in pieces of blackened chicken were a staple of weekend dinners al fresco or piled high on tables with flag-strewn Fourth of July cookout spreads—and they were always seasoned in one of two styles. My father’s entire family coated chicken in Cornell sauce well before the grills were lit, then brushed more of this speckled, creamy marinade on the chicken as it cooked.

The kitchen was often the scene of searing battles that went on into the night, long after dinner plates were cleared.

Cornell chicken, the delightful and dummy-proof product of this procedure, is so strangely esoteric—found in the homes of the Finger Lakes region only—yet so broadly appealing that there must be some folks bent on keeping it a local legend. It’s also intertwined with American chicken history, as it was bestowed upon the region through Cornell University’s Institute of Food Science and Marketing, which was founded by Robert C. Baker, the inventor of the Cornell barbecue sauce recipe. Baker spent his long career expanding the possibilities for chicken appreciation, nuggets, and hot dogs along the way, earning himself comparisons to George Washington Carver, his medium being chicken instead of peanuts. Cornell sauce has few ingredients, but they are used with great results: It’s an emulsion of apple cider vinegar, oil, a whole egg, and a shake of poultry seasoning, for a tangy and complex white barbecue sauce that chars and becomes one with the crisped chicken skin. But it must be applied the day before grilling to fully work its magic on each piece.

This day-ahead marinating principle worked for my mother’s take on grilled chicken, too. Hers involved tossing bony bird pieces with soy sauce, sesame oil, and chopped scallions the night before to really penetrate them with umami. Dark soy sauce, thick like tar, helps give the chicken a deep, reddish stain—burrowing beneath the dimpled pores of its skin. The sauce is not to be skipped if you can get to an Asian grocery for it. The opposite of regionally specific, the same thing might be done anywhere in China, Taiwan, Japan, Hawaii, and elsewhere.

It’s a rudimentary formula that hinges on an eternal truth: that soy sauce, absorbed into the skin-on, fatty, and flavorful flesh of chicken, is simply irresistible when grilled. Because my mother eschewed measuring spoons in favor of intuition and trusted her mood over stringent recipes, this chicken was a little different every time. Sometimes she would add crushed garlic or ginger to the marinade. Sometimes it might have a touch of chile sauce. But unlike many other cooks’ soy-sauce-based marinades, hers never incorporated sugar. Sweetness was absent from both of my parents’ cooking.

On paper, these two marinades—Cornell and my mother’s soy sauce chicken—do similar jobs of infusing chicken with salty flavor. They do not appear to complement each other. But where else on earth would soy sauce meet dried marjoram (a main ingredient in the finely dusted poultry seasoning blend)? And how was it possible that apple cider vinegar and toasted sesame oil, two staples in my cupboard, had never mingled outside of it? The idea of simply crash-banging my two inherited marinades into one bowl of chicken was so absurd—but so inevitable, it seemed. Would it be good? I wondered.

Thanks to Samin Nosrat, we know that balancing salt, fat, acid, and heat is foundational to good cooking. And thanks to my parents, I know that a good chicken marinade should be applied overnight to deeply season the meat. After all, the word mariner, from the French, essentially means “to pickle.” Cornell sauce is heavy on acid from all the vinegar, and my mom’s soy sauce chicken runs high in salinity from all the soy sauce. Two items off of Nosrat’s checklist. Together, they seemed like a lot of everything, a collision of powerful interests even before hitting the searing-hot grill.

Fusing Chinese and Western European or American dishes often starts with giddy optimism and ends in bitter disappointment. Not every recipe, like my parents’ marriage, lives happily ever after. So I made an adjustment of my own—I added a spoonful of sugar to the mix. Salty, acidic, herbal, and sweet, this grilled chicken marinade was, to my surprise, quite good, a raucous party of flavors in the best way possible. Just a modern, inclusive recipe that moonlights as therapy—and a suggestion to incorporate one’s own roots in cooking, however gnarled. As for me, this is the only chicken marinade I’ll need.

In Know Your Chicken, America’s favorite protein crosses roads and cultures, and often finds itself on a sheet pan. Cathy Erway, author of the upcoming Sheet Pan Chicken from TASTE and Ten Speed Press (September 2020), helps you navigate the world of chicken appreciation from the roost to the roast.