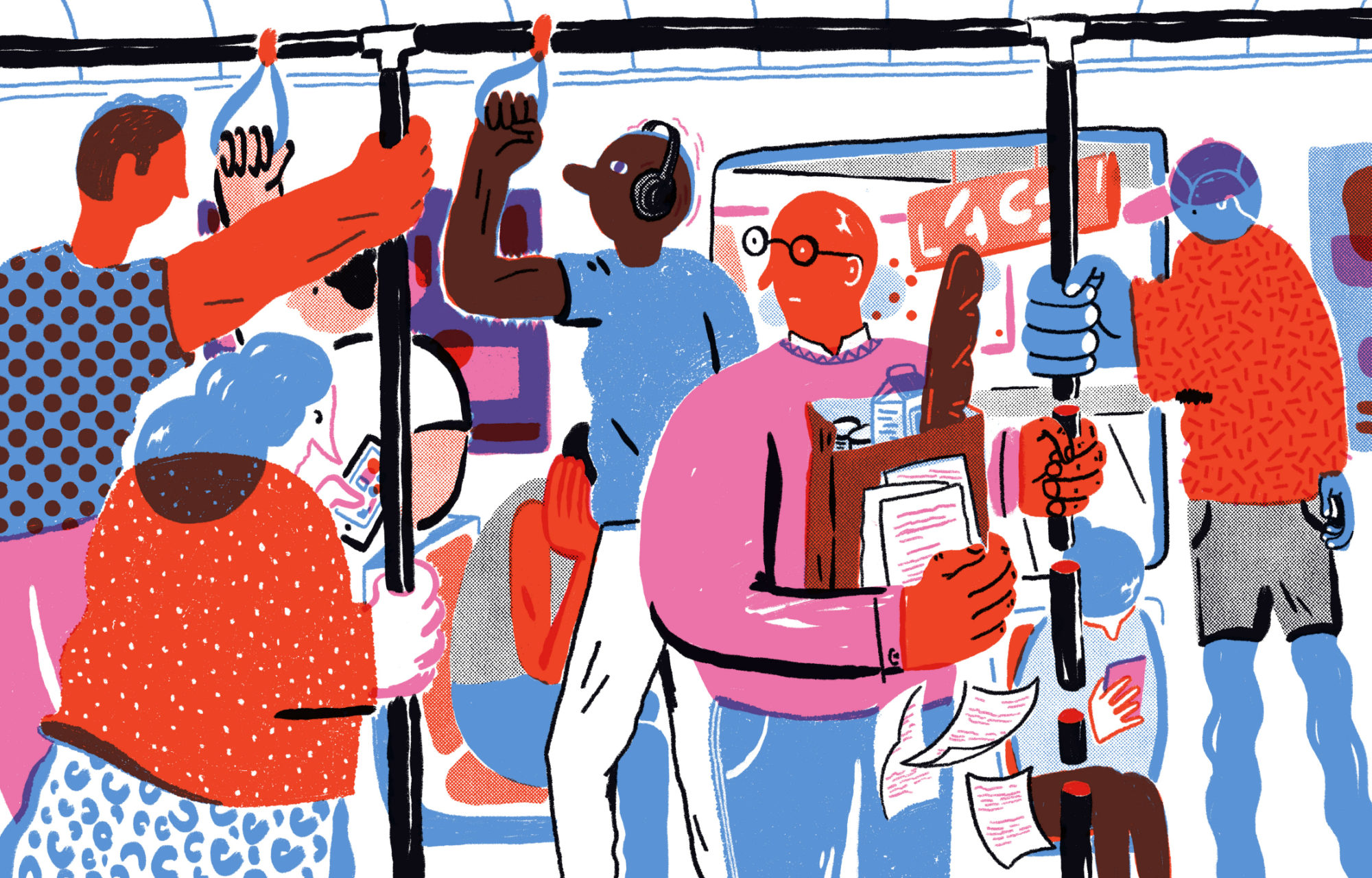 A summer in New York City gives one West Coaster reason to look at the fruit closely.

I signed a contract early this year to write a book about James Beard. So in May, my husband, Perry, and I packed an enormous suitcase he bought at Marshall’s, stuffed the things we thought we’d need in plastic tubs, and wedged everything (including the dog) into our car as it sat outside our stucco bungalow in Oakland—we were headed to New York City. For three months I’d be rustling through the papers of the Beard archives at NYU. It was the first time either Perry or I would be in New York longer than a week—and the first time we’d have a kitchen there. Like Beard himself—an Oregonian who settled in Manhattan in 1937 at the age of 34, desperate to make something of himself—we were Westerners leaving the crash of the Pacific for the rattle of the subway. What would we cook?

Our Airbnb was close to Fort Greene Park in Brooklyn. We got the keys from the landlord, who lived upstairs. I asked where we should shop. “Is there a supermarket?” I felt stupid.

“A supermarket?” He said to go to Mr. Mango on Myrtle Avenue. “They have everything you need,” he said. “Bananas. Milk. It’s cheap.” His wife, a designer of fashion accessories, said to go to the mini market a few blocks farther down. “Almost everything is organic,” she said.

That night we unpacked our Tatung electric rice cooker and AeroPress coffee maker, cultural accessories as much as practical appliances, things that gave us continuity, let us keep our California-ness. We tried to keep Mickey, our dog, from freaking (it was the first time she’d ever heard footsteps through a ceiling). Shopping and cooking would have to wait. Perry Yelped a Korean place close enough to walk to. I headed in the direction of the Brooklyn Navy Yard, under the Brooklyn-Queens Expressway, with the thwocking of car tires hitting seams in the roadway.

The Korean place was a Seamless-driver pickup point masquerading as a restaurant, a counter with a sheet of plywood behind which a woman cooked. I, a walk-in customer, was superfluous, a disruption. I waited. Finally the woman came around the plywood, but the things I ordered off the menu were not available, she said, then: “How about kimchi fried rice?” Phrased as a question, this was actually a statement: I was getting kimchi fried rice or I was getting nothing.

I had many things to learn in New York—like how to compromise on the fly, learning to settle for something other than what you’d originally wanted. It was the first in a summer of transactional lessons, in a city where you have to hustle, or at least scuffle, for your place.

Back at the apartment, we ate fried rice from black plastic takeout boxes with shiny Ikea forks. I got up early next morning and walked to the aggressively air-conditioned organic mini mart of our landlady’s praising. I circulated through the aisles half a dozen times, pulling a plastic rolling basket behind me. I looked at $12 bags of granola and $9 boxes of Gorilla Munch. I bought cage-free eggs, butter, bananas, yogurt, and half a large-sliced country loaf that, like a freshly pumped kickball, resisted my squeeze. We were better off at Mr. Mango, where the $1 plastic clamshells of blueberries stacked up on the sidewalk in the humid air had sweetness and a lingering musky fragrance. At least that bread could be cajoled into decent toast in the ancient toaster oven, its white casing stained amber from heat.

But Mr. Mango’s blueberries were never that good again. The firm, green-flushed berries in the second clamshell tasted sour. For weeks, even after we moved to our main rental, on the border between the Brooklyn neighborhoods Clinton Hill and Bedford-Stuyvesant, Perry and I were shopping nomads, the fabric shopping bags we’d toted from California flapping weightlessly on our shoulders. We were exploring, even as we sought the right market to bring a sense of order to our narrow little dead-end kitchen. We wanted to feel at home—instantly naturalized in Brooklyn—not like tourists getting by on delivery bags thrust through the door by harried men on electric bikes.

We made mile-long walks to different Key Food stores. The one on Fulton Avenue, with black and Dominican shoppers, on a block with a storefront mosque, felt more like Oakland than the one near Pratt, the one with the freezing temperature and the glass-door lockers fronting a pastel ice cream wonder wall of pints. We bought chicken thighs, bottled jerk marinade, and a sack of Nishiki rice.

We walked to Waverly Gourmet Market, took the G train to the weirdly spacious subterranean Whole Foods in Williamsburg. We drove to Fairway Market in Red Hook and rode the B52 bus to a new Trader Joe’s, next to Dekalb Market Hall, and stood in a triple-stream line as vast and fearsome as Friday traffic out of the city on the George Washington Bridge.

Weekly stops at the Saturday Fort Greene Park farmers’ market became reminders of our limited time in New York. Fruit displayed in the pulp-fiber at the front of the market followed the summer: cherries and blueberries in June, strawberries in July, peaches and red currants in August. At the She Wolf stand I found wonderful breads: sourdough bâtards and square-edged polenta loaves with charred patinas from the oven. Perry cooked pork stew and chicken adobo. I braised broccoli rabe and made tomato sauce for spaghetti.

One day, at the end of a lunch excursion to Sheepshead Bay, we found a produce market in a semi-outdoor maze of bins under a tent, with long, twisted Italian green peppers and stalks of fresh dill with grapefruit-yellow flower heads. “This definitely feels the most like home,” Perry observed. We bought only a couple of ordinary things—broccoli, onions, a head of celery, all from California or Mexico—and for a second felt rooted, but only for a second. In the city where you scuffle for your place, our time was fixed. My time in the Beard archives was drawing to an end. At the same time, something unseen in the kitchen was sending us a message.

One day, two months into our stay, we heard a clicking behind the radiator wall. A few nights later Mickey’s whining woke us: She was in the kitchen, keeping watch over an invisible thing moving in the wall beside the range. We’d hear it under the floor; in the wall behind the desk, but at night it would move to the kitchen. Mickey spent almost every night there, crouched on the bunched-up rug. Watching. It was as if Brooklyn let us play at being New Yorkers for a little while, let us pretend to be rooted here, as we shopped its greenmarkets and ran out to its bodegas for freezer-burned pints of Häagen-Dazs. Now, a couple of weeks before we had to relinquish our rental, Brooklyn wanted us gone.

Maybe something always reminds you how temporary your time is in New York, how much you exist in space you’re occupying for a while, before you have to give it up. There’s always someone who wants your seat on the subway, the palm space you command on the pole. Even James Beard, who lived in this city almost 50 years, dreamed often of leaving New York to take up his real home on the West Coast again.

We left the loft to the thing that wanted it back. We packed the car and drove home. We went shopping to restock our Oakland kitchen. In Berkeley Bowl, I reached to tear a plastic bag off the roll across a table of cherry tomatoes, caught the weedy smell of the calyxes—the tomatoes, from northwest of Sacramento, hadn’t been picked that long ago.

It was good to be home. We wondered how soon before we could get back to Mr. Mango.