Get a free recipe
Subscribe
Muah Chee and the Microwave
By: Yi Jun Loh 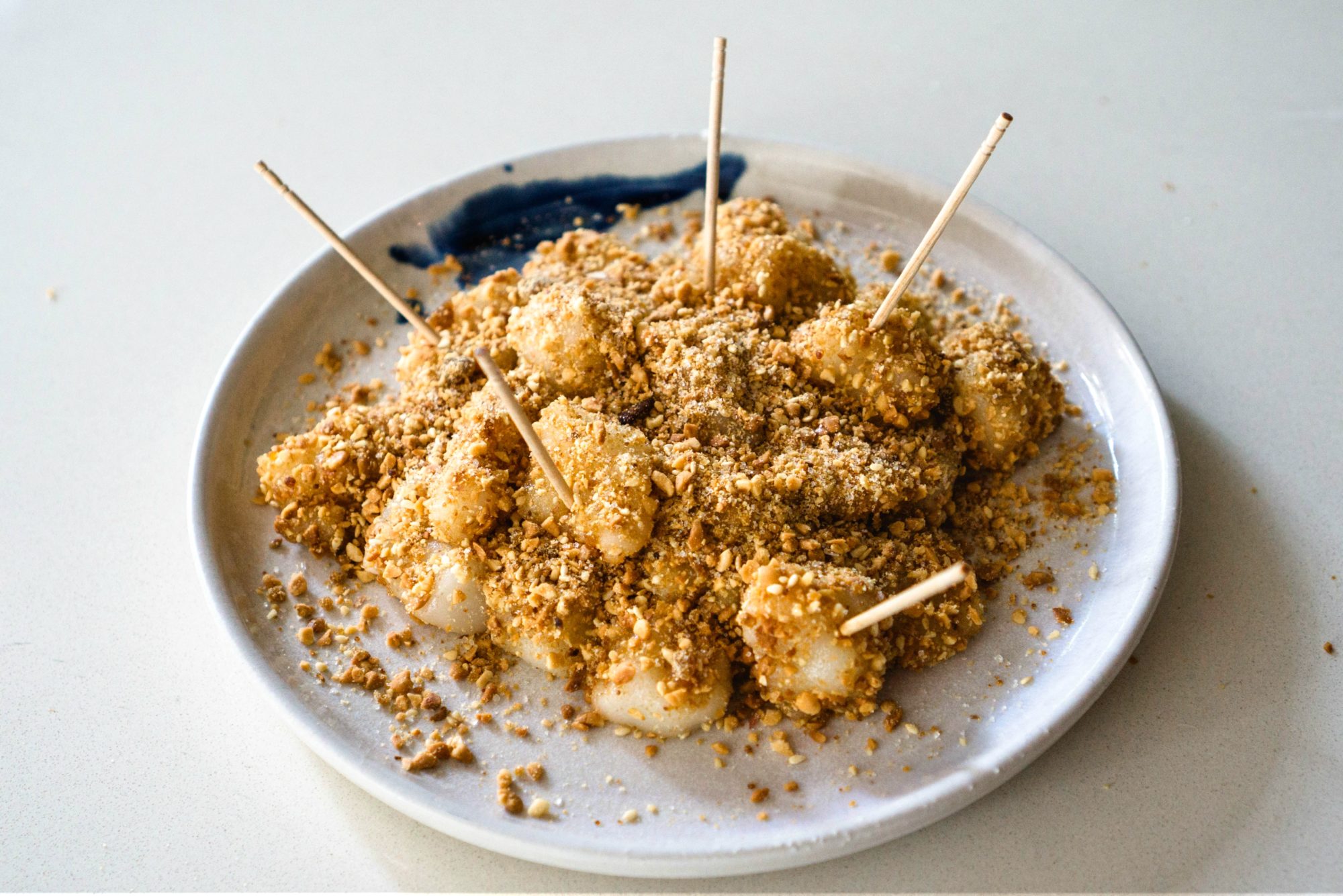 Most microwave ovens see little use other than reheating leftovers, popping corn, and “baking” the occasional cake-in-a-mug. But this ubiquitous kitchen appliance unlocks the secret to mochi, and muah chee, at home.

From Bagel Bites to frozen chicken tikka masala, microwave “cooking” has always been about convenience at the expense of, well, quality home cooking. Rarely is the nuke used as a strategic cooking tool. Enter the mochi, a sweet Japanese rice cake. There’s a little-known hack that greatly simplifies the process of making a version of those chewy, doughy balls of glutinous rice that I grew up eating in Malaysia.

Mochi as we know it today is rooted in the traditional Japanese ceremony of mochitsuki, in which spirited Japanese men repeatedly pound a heap of mochi dough with large wooden mallets, all the while shouting and sweating profusely. As satisfying as it is to watch the glutinous rice turn smooth and pliable from all the abuse, this labor-intensive process would turn most people off to ever making it at home. Following the recipe can take up to an entire day to complete: You start with steaming the rice, then pound it into a dough, knead it into shape, then fill and reshape it, then finally steam it again. Fortunately, there are some shortcuts my mom told me about, which I supplemented with some good old Internet sleuthing. Using glutinous rice flour instead of kernels of cooked short-grain rice (as tradition states) does away with the dough-pounding process. And replacing the traditional steamer basket with a microwave speeds up cooking time and eliminates the need for any special equipment.

Upon learning this, I immediately thought to apply this microwave shortcut to make a Chinese snack I’ve had since childhood. They’re muah chee–similarly doughy, glutinous rice balls from Southern China often eaten at breakfast or at the end of dim sum. The key difference between mochi and muah chee lies in their appearance. The more ubiquitous Japanese daifukumochi is typically filled with red bean paste, ice cream, or whole strawberries, whereas muah chee dough is traditionally steamed or boiled, then cut up into bite-size pieces and rolled in a crumbly coating of peanuts and sugar.

While mochi may be the more famous dough ball in the taxonomy of Asian sweets, muah chee is a vastly superior snack. The amount of filling in a mochi is severely limited by its size, but when it comes to muah chee, you can pile on spoonfuls of extra peanut crumb on top of your plate, giving you an off-the-charts tasty-bits-to-dough ratio. And along with the chewiness of the glutinous rice dough, the peanuts and granules of sugar provides a delightful pop of textural contrast. It’s a much simpler dish to execute, as there’s no need to fiddle with folding the dough around the filling without causing any leakage, which is a skill in itself.

All you really need is two trays, a microwave, and a dough cutter, and you can have muah chee ready for breakfast in under an hour. No dough abuse required, no accidental steam burns, no potential leaks of filling, no fuss—all because of the most underrated of kitchen appliances.